Everything you need to know about the Green New Deal

From its historic inspiration, to how AOC introduced the term to the mainstream and its main policy prescriptions 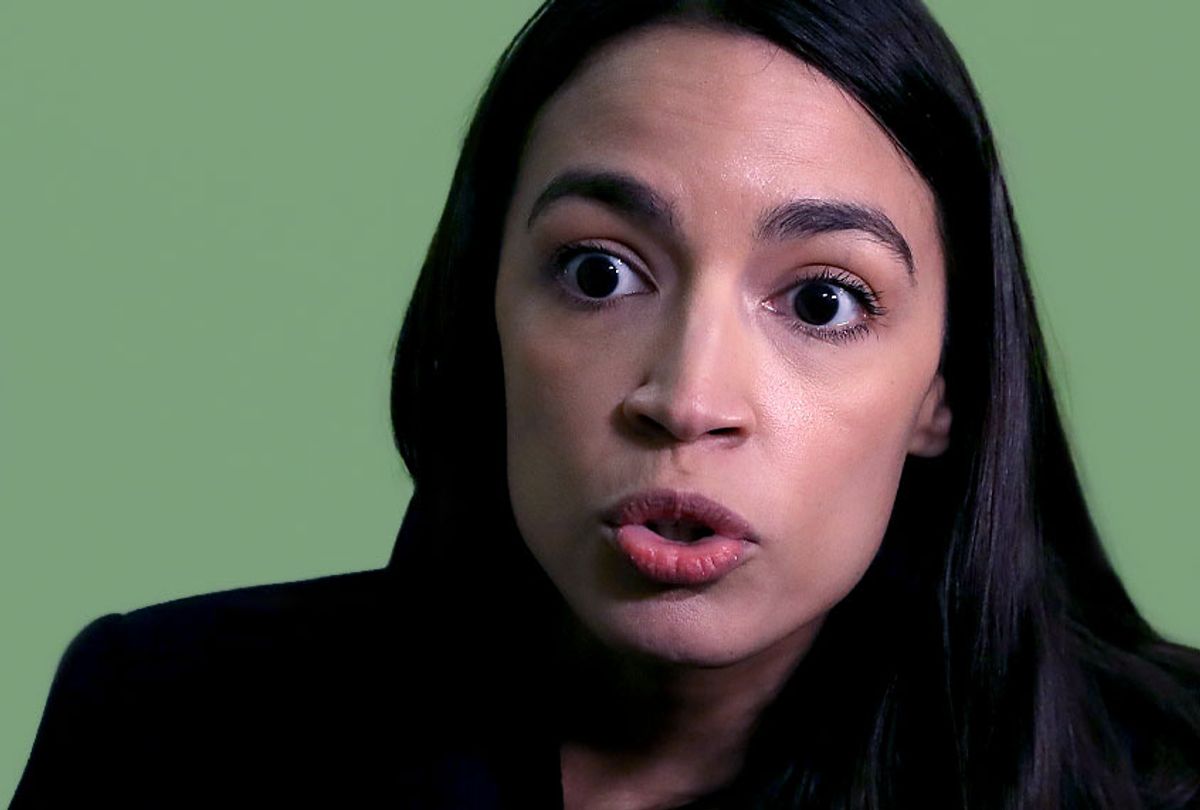 What is the Green New Deal?

Chances are that, regardless of which Democrat receives the 2020 presidential nomination, the concept of a Green New Deal will feature prominently into his or her subsequent campaign. It may be a program that is fully endorsed by the nominee, followed only in part or outright eschewed. Regardless, it is inconceivable that Americans won't be talking about a Green New Deal in 2020 — and so it is instructive to understand exactly what a "Green New Deal" actually represents.

1. The term is inspired by the transformative presidency of Franklin D. Roosevelt.

One can't fully understand the Green New Deal without looking back at the original New Deal. When former President Franklin D. Roosevelt promised "a New Deal for the American people" in his acceptance speech after becoming the Democratic presidential candidate in 1932, he used the term "New Deal" to refer to the broad range of economic and social reforms which he implemented throughout his first term.  These policies were implemented in two phases — the so-called First New Deal from 1933 to 1934 and Second New Deal from 1935 to 1936 — and saw the American government rapidly expand its powers in order to alleviate the suffering of the Great Depression and address broader economic and social injustices.

Beyond its specific policies, the term "New Deal" referred to a broader political coalition that Roosevelt rallied behind the Democratic Party for a generation. Thanks to the perceived successes of the New Deal programs, a coalition including the working classes of all backgrounds; ethnic, racial and religious minorities; Southern whites; labor unions and intellectuals joined forces with the traditional Democratic Party machinery to dominate American politics throughout the mid-20th century. When Democrats look back fondly on the New Deal, they do so because it evokes an era in which the party held meaningful power and used it to implement their progressive policy goals.

2. Rep. Alexandria Ocasio-Cortez, D-N.Y., did not coin the term "Green New Deal," but she is directly responsible for bringing it into popular currency.

It's hard to determine exactly when the term "Green New Deal" was first coined, but it was definitely used by prominent political commentators as far back as 2007, when columnist Thomas L. Friedman mentioned it in an editorial for the New York Times Magazine. That said, AOC deserves a large share of the credit for taking a term that was previously used mainly by policy wonks and bringing it into the political mainstream.

Shortly after she was elected in November, AOC showed support for activists pressuring Speaker of the House Nancy Pelosi to lead the Democratic Party in developing a plan for simultaneously addressing man-made global warming and addressing economic injustices. Since then, she has promoted the concept of a Green New Deal as one of her chief political and moral goals.

3. The Green New Deal prioritizes fighting global warming — and insists on the Democratic Party leading the way in developing comprehensive and concrete policies that will stave off an impending apocalypse.

AOC did more than simply express support for a Green New Deal. In February, mere weeks after Democrats took over the House of Representatives, she and Sen. Edward Markey, D-Mass. joined forces to release a 14-page resolution outling the goals of the Green New deal.

After describing the threat posed to human civilization by man-made climate change, the resolution called for a "10-year national mobilization" in order to completely transition the American economy to clean, renewable and zero-emission energy sources; reform our infrastructure and buildings to likewise be compatible with green goals;  reduce greenhouse gas emissions from America's agricultural sector "as much as is technologically feasible"; and in every other way address the fact that "the United States has historically been responsible for a disproportionate amount of greenhouse gas emissions, having emitted 20 percent of global greenhouse gas emissions through 2014."

In the words of Washington Gov. Jay Inslee, the only 2020 Democratic presidential candidate who has made fighting global warming his campaign's central focus (and has released detailed policy documents explaining how he would solve the problem): "I think we've complimented the aspirations of the Green New Deal . . . which, by the way, I think has been very helpful to the cause. I'm very appreciative of the leaders who brought that into the national discussion. And the way I sort of look at it is, I think this is the Green New Deal said we're going to the moon, and I think my really comprehensive plan designed the rocket ship, and I think both are important. Both are pushing the 'Go' button on the mission, but also designing the systems that will get you there."

4. Like the original New Deal, the Green New Deal would focus on creating jobs.

The Green New Deal vows to address economic injustices similar to the ones Roosevelt attempted to rectify in his original New Deal. These include providing the American people with "(i) high-quality health care; (ii) affordable, safe and adequate housing; (iii) economic security; and (iv) access to clean water, clean air, healthy and affordable food and nature."

As the resolution also explains, "a new national, social, industrial, and economic mobilization on a scale not seen since World War II and the New Deal era is a historic opportunity— (1) to create millions of good, high-wage jobs in the United States; (2) to provide unprecedented levels of prosperity and economic security for all people of the United States; and (3) to counteract systemic injustices."

Some economic aspects of the Green New Deal have been met with controversy. For instance, when a fact sheet which AOC's office temporarily posted on a blog associated with her website and given to media outlets was made public, it included a promise of benefits for those "unwilling to work," which was greeted with horror by some critics. It also included a controversial line — presumably meant to alleviate some of the economic concerns of potential Green New Deal supporters — about how it strove for net-zero emissions rather than none at all, "because we aren’t sure that we’ll be able to fully get rid of farting cows and airplanes that fast." These ideas were only in the fact sheet, however, and not in the congressional resolution itself.

5. Right-wingers hate the Green New Deal, because of course they do.

Not surprisingly, a Republican Party who opposes both the scientific consensus on global warming and the idea of government regulation of the economy staunchly opposes the Green New Deal. Senate Majority Leader Mitch McConnell attempted to preemptively discredit the idea in March when he held a "sham vote" on advancing the Green New Deal, which failed by a vote of 0-57 after all but three Democrats only voted "present" in protest.

As NBC News reported, "Mitch McConnell wanted to force the vote in order to put Democrats up for reelection and those running for president in 2020 in a tough spot politically." The non-Republicans to vote against the Green New Deal were independent Sen. Angus King of Maine as well as Democrats Sens. Doug Jones of Alabama, Joe Manchin of West Virginia and Kyrsten Sinema of Arizona.

“We’re not going to stand for sham bills that the other side is all voting no on. They know what a trick and joke and sham that is — so does all the American people,” Senate Minority Leader Schumer said prior to the vote. “But we are finally talking about the issue, and that is great because climate change is not a joke. It's not a hoax — it's a crisis — and that's why we're doing these things.”

President Donald Trump has ridiculed the Green New Deal on several occasions, including when he labeled it "the craziest thing" during a speech to the National Republican Campaign Committee in April.

"I’m only afraid that we’re going to be too hard on the Green New Deal and they’re not going to do it because I want them to do it," he said at the time. "We don’t want to have them knock it out before we run against it, so let’s take it easy."

The Green New Deal has also been roundly denounced by conservative media outlets. Charles C. W. Cooke wrote in the National Review that it is "the inchoate shopping list of a political novice who has managed to get herself elected to Congress and believes that this has turned her into a visionary."

Ryan Bourne of the Cato Institute wrote that "ordinarily, a pitch to put society on a war footing to adopt expensive power sources, restrict people’s ability to fly and eat what they want and redistribute vast new sums of printed money would be considered politically bonkers. Yet remarkably, Democratic presidential candidates, including Sens. Kamala Harris, Elizabeth Warren and Kirsten Gillibrand, have endorsed this resolution."

And Fox News primetime host Sean Hannity denounced the Green New Deal as a "horrific — frightening, frankly — piece of legislation" and claiming that "everything we have been saying about the new radical extreme Democratic Party — what they were hiding in 2018 — now it’s all in writing and it might be even worse than we thought."