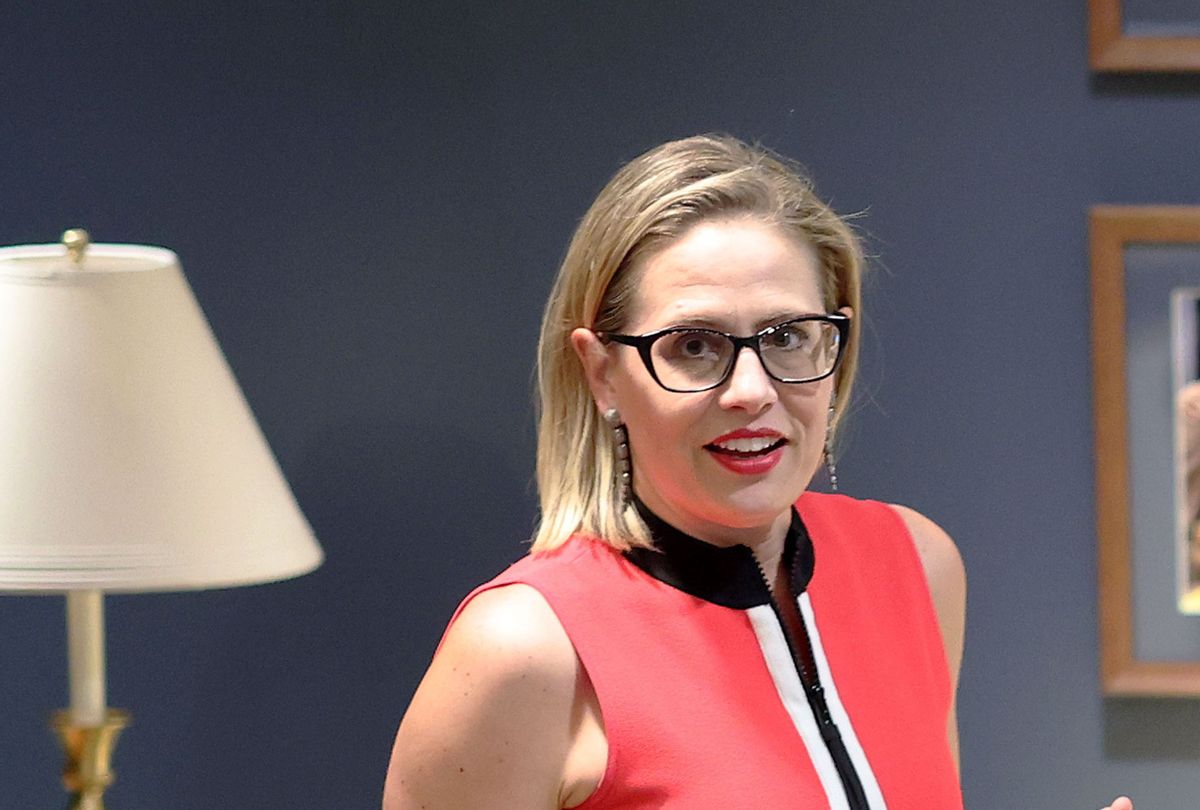 Sen. Kyrsten Sinema, the controversial Arizona Democrat who threatens to derail President Biden's legislative agenda, received more than $750,000 in donations from the pharmaceutical and medical device industries. After that, she announced her opposition to a Democratic plan to lower prescription drug costs.

Sinema told White House officials that she opposes House and Senate bills that would allow Medicare to negotiate drug costs, sources told Politico this week. Democrats estimate these bills would save $450 billion over the next decade and thereby pay for a large portion of President Joe Biden's $3.5 trillion spending plan. The budget bill would expand child care, health care and paid family leave and would fund programs to combat climate change, among other measures. Three House Democrats have also balked at the plan, although they have offered a "centrist" alternative that would drastically limit which drugs are subject to Medicare negotiation. Sinema reportedly opposes that proposal as well. During her successful 2018 Senate campaign, Sinema repeatedly vowed to lower prescription drug prices and drug costs for seniors.

Sinema is a longtime favorite of the pharmaceutical industry and now appears ready to undermine Biden's entire agenda as Big Pharma wages a lobbying blitz in hopes of torpedoing the bill, which nearly 90% of voters support. Sinema and several House Democrats who oppose the drug pricing plan have received major financial support from the industry. Given a 50-50 Senate and a narrow House majority of 220 to 212 (with three seats currently vacant), their opposition could sink the proposal or even the entire budget bill.

Sinema has received $519,988 from PACs and individuals in the pharmaceutical industry throughout her political career, according to data from the Center for Responsive Politics. She brought in more than $120,000 in pharma contributions between 2019 and 2020 even though she is not up for re-election until 2024. Sinema has also received $190,161 from donors in the pharmaceutical manufacturing space and $62,797 from the medical supplies industry.

Sinema's office is led by a former lobbyist whose firm worked on behalf of pharmaceutical companies. The senator's chief of staff, Meg Joseph, was a registered lobbyist and principal at Clark & Weinstock, where her clients included the health insurer Health Net. During her tenure, the company also lobbied on behalf of numerous pharmaceutical companies, including Pfizer, drug distributor AmerisourceBergen Corp., and the biotech firm Genzyme Corp. It also lobbied on behalf of Pharmaceutical Research & Manufacturers of America (PhRMA) and AdvaMed, two major industry trade groups.

Sinema did not respond to questions from Salon. Her spokesman Josh LaBombard told Politico that she is committed to "working directly in good faith with her colleagues and President Biden on the proposed budget reconciliation package."

He continued, "Given the size and scope of the proposal, while those discussions are ongoing we are not offering detailed comment on any one proposed piece of the package."

Sinema got major backing from the industry before her threat to derail the Democrats' drug bill. Center Forward, a Washington nonprofit that has received at least $4.5 million from PhRMA, has run TV and digital ads praising Sinema for the past two weeks, according to The Daily Poster, and sent out pro-Sinema mailers urging recipients to thank the senator for "fighting as an independent voice." The group's board includes at least two PhRMA lobbyists who work on drug pricing issues and represent numerous pharmaceutical companies.

Senate Budget Chairman Bernie Sanders, I-Vt., called out Big Pharma's campaign to defeat the drug pricing legislation during a speech on Tuesday in front of PhRMA's headquarters in Washington.

"The overriding motivation of the pharmaceutical industry is greed," he said. "Their overriding goal is to make as much money as they can by squeezing as much as they possibly can out of the sick, out of the elderly and out of the desperate."

Sinema isn't the only Democrat who vowed to fight for lower drug costs before rejecting a plan that would do just that. Rep. Scott Peters, D-Calif., in 2019 praised the drug pricing plan but after receiving nearly $230,000 in the 2020 election cycle from the industry, as Salon's Jon Skolnik reported, had an otherwise-unexplained change of heart. Earlier this year, he led a group of 10 House Democrats in opposing the bill in a letter to House Speaker Nancy Pelosi. "If you institute it, you won't have cures because you'll dry up all the private investment that does that research," he told Roll Call after the reversal.

"That's absolutely not true," David Mitchell, founder of the independent nonprofit Patients for Affordable Drugs Now, said in an interview with Salon.

The claim that the bill would hinder development is a Big Pharma "lie" and "scare tactic," said Mitchell, who suffers from multiple myeloma, a blood cancer treated with a combination of drugs that he said carry a price tag of more than $900,000 per year. "For me, as a patient with incurable cancer, it sounds very much like extortion, like the gun is at your head, 'pay whatever we tell you, Mr. Mitchell, or you are going to die,'" he said. "It's bullshit."

Large pharmaceutical companies see profit margins that are much higher than other industries. A recent analysis by the nonprofit West Health Policy Center and Johns Hopkins Bloomberg School of Public Health found that Big Pharma firms could lose $1 trillion in sales over the next decade and still maintain their current research investments. A recent analysis by the Congressional Budget Office estimated that the Democrats' bill would reduce the number of new drugs developed by about two per year over the next two decades.

"You're talking about a tiny impact on new drug development," Mitchell said. "We can compensate for that by sending more money" to the National Institutes of Health, he continued, "because NIH is the engine of innovative new drug development. It's the single largest biomedical research agency in the world. All 356 drugs approved by the FDA from 2010 to 2019 are based on research, basic science from the NIH."

Peters was one of three Democrats on the House Energy and Commerce Committee to vote against the Democrats' drug pricing bill, along with Reps. Kurt Schrader of Oregon and Kathleen Rice of New York. A different committee later advanced the bill but the opposition appears to have enough votes to sink the measure — and the entire spending plan with it.

"I get that the pharmaceutical industry owns the Republican Party and that no Republican voted for this bill," Sanders tweeted after the vote, "but there is no excuse for every Democrat not supporting it."

Peters has received $860,465 from pharmaceutical PACs and employees, according to CRP data, the second most of any industry. He has already received $88,550 from the industry this election cycle, the most of any House member. On the day he sent the letter to Pelosi, Peters received big donations from the CEOs of Pfizer, Eli Lilly, Merck and Bristol Myers Squibb, as well as from lobbyists at PhRMA.

Schrader, who also signed Peters' letter, has also received extensive financial backing from the industry. He has received $24,500 from pharma PACs and employees this cycle, the second most of any industry, and got $144,252 in 2020, the most of any industry. Throughout his career, Schrader, whose grandfather was an executive at Pfizer, has received $614,830 from the industry, according to CRP data. His former aide left earlier this year and quickly began lobbying for PhRMA, according to The Daily Poster.

Peters and Schrader did not respond to questions from Salon but they have introduced a supposed centrist alternative that would drastically limit the number of drugs whose prices Medicare could negotiate.

"It's masquerading as a Medicare negotiation" bill," Mitchell said, noting that it would exclude Medicare Part D drugs, which make up 83% of Medicare drug spending. The bill would only allow the agency to negotiate a "tiny, tiny sliver" of drugs covered under Part B that are administered by doctors and hospitals, he said, but would exclude drugs that are still in their period of exclusivity, which can last up to 12 years. "To call it Medicare negotiation is a fraud," Mitchell said.

Kathleen Rice's opposition to the bill is less easily explained, since she has not been one of the industry's biggest recipients, collecting a relatively modest $84,000 in campaign contributions from Big Pharma sources, according to CRP data. Furthermore, Rice had twice previously voted for earlier versions of the plan and campaigned on lowering drug prices. In a letter to a constituent who expressed disappointment with her vote, Rice said that she supports "the goals" of the bill and "allowing Medicare to negotiate drug prices" but that she opposed the bill because it is being used "as a tool to offset the cost of a $3.5 trillion reconciliation bill."

Rice cited opposition from Sinema and Sen. Joe Manchin, D-W.Va., over the bill's price tag to justify her vote.

"That bill has no chance to become law, as Democrats in the Senate have stated that a bill with such a price tag will not have the votes to pass in their chamber," she said in the letter, which was obtained by the American Prospect. That's a strange and striking argument, considering that Rice voted for many other pieces of legislation that will go into a bill she says "has no chance to become law."

"Rep. Rice believes the House should produce a reconciliation bill that can realistically become law," Rice spokesman Stuart Malec said in a statement to Salon. "She supports Medicare negotiation, but the H.R. 3 drug pricing language in its current form does not have the support to pass the Senate. And Rep. Rice does not support advancing provisions that will jeopardize the bill's final passage in the Senate."

These large donations are only a portion of the pharmaceutical industry's political spending aimed at defeating drug pricing legislation. Pharmaceutical companies have spent more than any industry on federal lobbying this year, shelling out $171 million so far in 2021, according to CRP, more than twice as much as the next biggest spending industry. Pharmaceutical companies spent $309 million on lobbying last year, the most ever. PhRMA alone has spent more than $15 million on lobbying and last week launched a seven-figure ad campaign to oppose the drug pricing plan.

Patient advocates like Mitchell and advocacy groups like the AARP, Protect Our Care and Social Security Works are pushing back through lobbying and ad campaigns of their own.

"Pharma thinks this is just like every other time they have bent D.C. to their will with money, but it isn't," Alex Lawson, executive director of Social Security Works, said in a statement to Salon, noting that grassroots groups have spent years building a broad coalition of support among voters of all political persuasions. "And as for the Dems carrying water for Big Pharma, we are showing them the consequences of that. Their phones are ringing off the hook, there's daily protests at their offices, and their local media is full of stories about their cozy relationships with Big Pharma."

Lawson expressed optimism that Biden and Pelosi can get the legislation passed, given the widespread public support for this issue.

"Big Pharma is used to winning," he said. "They've never gone up against a movement this powerful."

"We have the best opportunity that we've had in two decades to actually enact reforms that will meaningfully lower the prices of prescription drugs to the American people and stop subjecting us to the power of multinational corporations," Mitchell said. "It's an uphill fight all the way because we know who we're up against. I think we have a really good shot of getting it done."