Professional pollsters blew it again in 2020. Why? 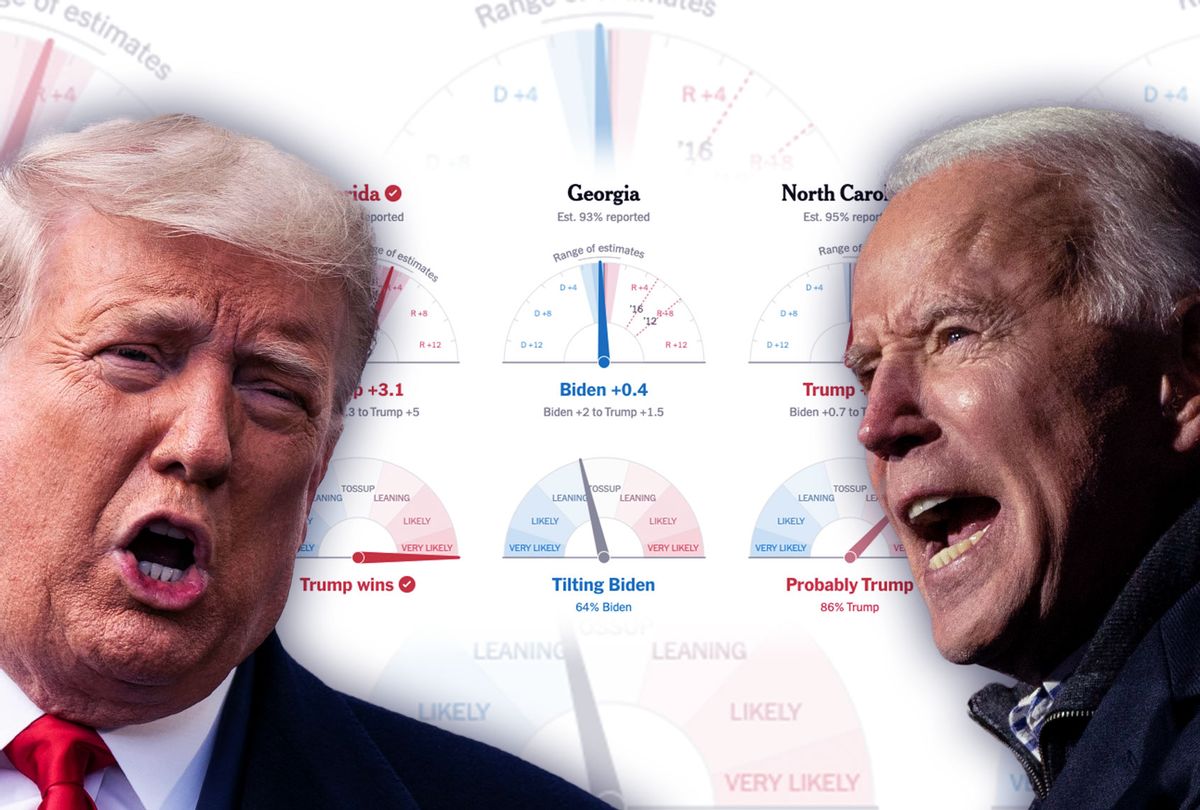 Once again, we have an election in which the polls seem to have underestimated Donald Trump — with potentially significant consequences for how people may have voted.

If you're a Democrat, you may still have PTSD from the prognostications for the 2016 election, in which polls heavily favored then-Democratic nominee Hillary Clinton over Trump, but were proved wrong on Election Day. While it remains to be seen who will emerge the victor in 2020, there is little question that the 2020 polling consensus held Biden to not only be a favorite, but a big favorite. Statistical aggregator FiveThirtyEight gave Biden an 89% chance of winning and estimated that he would win the popular vote by 8 percentage points as well as claim Florida, a state that ultimately went to Trump. The polls averaged by RealClearPolitics predicted that he would win the popular vote by 7.2 percentage points and listed as "toss ups" a number of states that wound up being solidly pro-Trump, including Florida, Ohio, Iowa and Texas.

Political analyst Charlie Cook epitomized the prevailing view when he wrote on Election Day that Biden's "actual lead is more like 9 or 10 points, based on the higher-quality, live-telephone-interview national polls conducted since the first debate" and that his "path to 270 electoral votes seems pretty straightforward."

At the time of this writing, Biden has only a two point lead in the popular vote over Trump, and even if that margin widens, it is mathematically impossible at this point for it to reach even half of what FiveThirtyEight, RealClearPolitics or Charlie Cook projected in terms of popular vote percentage margin. While Biden could still win in the Electoral College, it will be not in a predicted landslide but rather a squeaker, one made possible by razor-thin margins in states like Arizona, Michigan, Wisconsin and Pennsylvania... all of which were generally regarded by pollsters as being much, much more secure for Biden.

After the debacle that was 2016, pollsters spent years trying to hone their models to account for the errors that widely predicted a Clinton victory. The data suggests they did not succeed.

"We won't know for a few days exactly the degree to which the polls were off, but it appears that they (1) significantly underestimated Trump support in Florida and in the Rust-Belt (3-5 points), (2) slightly underestimated Biden support in the West (1-3 points), and (3) were pretty dead-on elsewhere," Dr. David Barker, director of the Center for Congressional and Presidential Studies and a professor of government at American University, wrote to Salon. "This pattern is consistent with what was observed in both 2016 and 2018. Despite the fact that there were far fewer undecided voters this year, there were more 'high quality' polls conducted late in the race this year, and pollsters mostly corrected their error of failing to weight for education in 2016."

He added, "It is not yet clear, then, what explains the errors."

While Barker did not have a theory for the polling errors in the Rust Belt, he speculated that there be a "challenge in polling Hispanic voters—especially those who do not speak English fluently. Overweighting Hispanics who speak English fluently does not correct for the underrepresentation in surveys of Hispanics who do not—the latter of whom are much more disproportionately Democratic than the former in the West (largely Mexican Americans) but more disproportionately Republican in Florida (Cubans and Venezuelans). That might explain why results are more favorable to Republicans in [Florida], relative to the polls, and more favorable to Dems in the West, relative to the polls."

Dr. Christopher Wlezien, a professor of government at the University of Texas in Austin, echoed this view.

"We still don't have final results, but it looks pretty clear that national polls understated Trump's share and that this occurred in many states as well, though there also is variation in performance there, as polls in some states predicted the outcomes better than others," Wlezien wrote to Salon. "Given the patterns, it looks like part of the explanation is systematic, but what specifically they missed remains to be determined."

Wlezien floated a few explanations, ranging from undecided voters breaking for Trump (as they did in 2016) and a surge in Republican turnout, to Democrats not voting because of overconfidence in a Biden victory. There's also the idea (of which Wlezien said "there's not much evidence in previous research") that Trump voters did not want to admit their predilection to pollsters — the so-called Shy Trump Effect.

"There are other possibilities, including the effects of changes in voting and also vote counting," Wlezien added. "We first need to get the final results and then start analyzing the polls and their performance, and so time will tell."

Regardless of the reasons for the discrepancies, American University political scientist Dr. Allan Lichtman wrote to Salon that it is time for the American public to stop seeing polls as prophecy.

"Polls are snapshots, not predictors," Lichtman explained. "Rather, they are abused as predictors. Also, the error margins in the polls are much greater than the pollsters would have you believe. For example, the commonly reported error of plus and minus 3 percent  is purely statistical, sampling error. It is the error that would be generated from drawing a sample of balls from a very large jar of red and green balls. The statistical error does not take into account response error or error from misestimating likely voters. I believe that this year the pollsters greatly underestimated the Trump turnout, although again specific study is required."

He concluded, "I do believe it is time to stop horse race polls. This is the second presidential election in a row that they misled the American people. Possibly too, the polling errors affected turnout, both for Democrats perhaps who thought the election was won and perhaps for Republicans who thought they had no chance to win. Again, we won't know without further study."

Incidentally, Lichtman developed a system for successfully predicting presidential candidates that primarily bases its projection on the incumbent party's perceived and actual performance. Based on Trump's myriad scandals, mishandling of the pandemic, stewardship of a poor economy and other problems, Lichtman predicted that Biden would win in 2020. He expressed dismay at Trump's premature declaration of victory and threats to stop legitimate vote counts in the currently undecided states.

"Trump's rhetoric is contrary to all studies showing that whether for mail-in or in-person voting fraud is vanishingly small, much too small to affect a statewide outcome," Lichtman told Salon. "Even the Republican National Lawyers Association, the Heritage Foundation, and Trump's so-called fraud commission failed to uncover any widespread or systematic fraud in U.S. elections. FBI director reached the same conclusion. Trump's self-serving rhetoric is aimed at claiming that if he loses he was cheated out of a win and at setting up court challenges to the vote."