The arrests come amid allegations of voting irregularities in the county 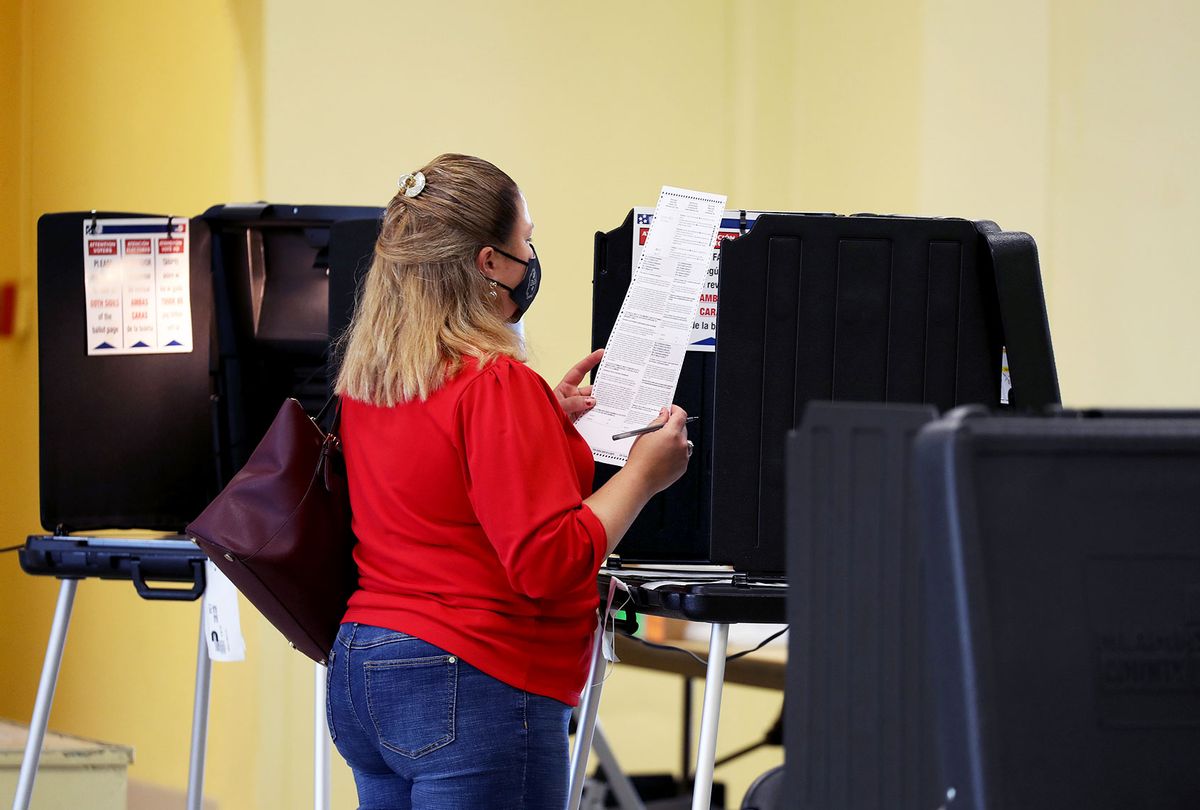 Susana Vasquez reads her ballot while voting at the Legion Park polling place on November 03, 2020 in Miami, Florida. After a record-breaking early voting turnout, Americans head to the polls on the last day to cast their vote for incumbent U.S. President Donald Trump or Democratic nominee Joe Biden in the 2020 presidential election. (Joe Raedle/Getty Images)
--

Three Republican voters in a Trump-loving Florida retirement community have been arrested on charges of casting multiple ballots.

Jay Ketcik, Joan Halstead and John Rider, all residents of "The Village," a retirement community that's served as a hub of support for the former Republican president, have been apprehended by police for voter fraud. Ketcik, 63, allegedly voted by mail in Florida last October 2020. But according to another ballot, Ketcik also voted in his home state of Michigan, court records indicate. Joan Halstead, 71, was arrested two weeks ago for allegedly voting in Florida last year but also through an absentee ballot in New York. John Rider, 61, was earlier this month arrested on suspicion of casting two ballots, though the details of his arrest are not fully known. Prosecutors have indicated that Rider submitted ballots both in Florida and in another state.

Both Ketcik and Halstead have entered not guilty pleas, aiming to challenge "the sufficiency" of their charges.

According to prosecutors, their arrests come amid allegations of voting irregularities in the county. County Supervisor of Elections Bill Keen said that Sumter is conducting an active investigation into the matter.

It remains unclear which candidates Ketcik, Halstead, and Rider voted for. However, Ketcik and Halstead are registered Republicans hailing from the deep red county, 67.8% of whose population voted for the Republican Party in the presidential election. According to The Independent, both Ketcik and Halstead's Facebook activity suggests they are Trump supporters. Rider, meanwhile, has no known party affiliation but was a registered Republican at the time of his arrest. All three face third-degree felony charges punishable by up to five years in prison.

The arrests come only a month after Florida Gov. Ron DeSantis, a Republican, signed a sweeping restrictive voting law apparently designed to bolster "election security" in the Sunshine State. The bill specifically heightens voter ID laws, limits the use of ballot drop boxes, and outright bans the practice of "ballot harvesting" – which allows third-party organizers and election officials to collect ballots on behalf of voters. Despite the professed need for these new rules, Florida state officials have repeatedly failed to find any evidence of widespread outcome-altering election fraud.

According to an Associated Press review of every potential case of voter fraud in Arizona, Michigan, Wisconsin, Georgia, Nevada, and Pennsylvania, fewer than 475 fraudulent ballots may have been cast in the 2020 election – a number that would not have made any difference in the outcome. "The review also showed no collusion intended to rig the voting," AP added. "Virtually every case was based on an individual acting alone to cast additional ballots."