Former veep nominee, a co-chair of the right-wing breakfast for years, says he has "no intention" of going back 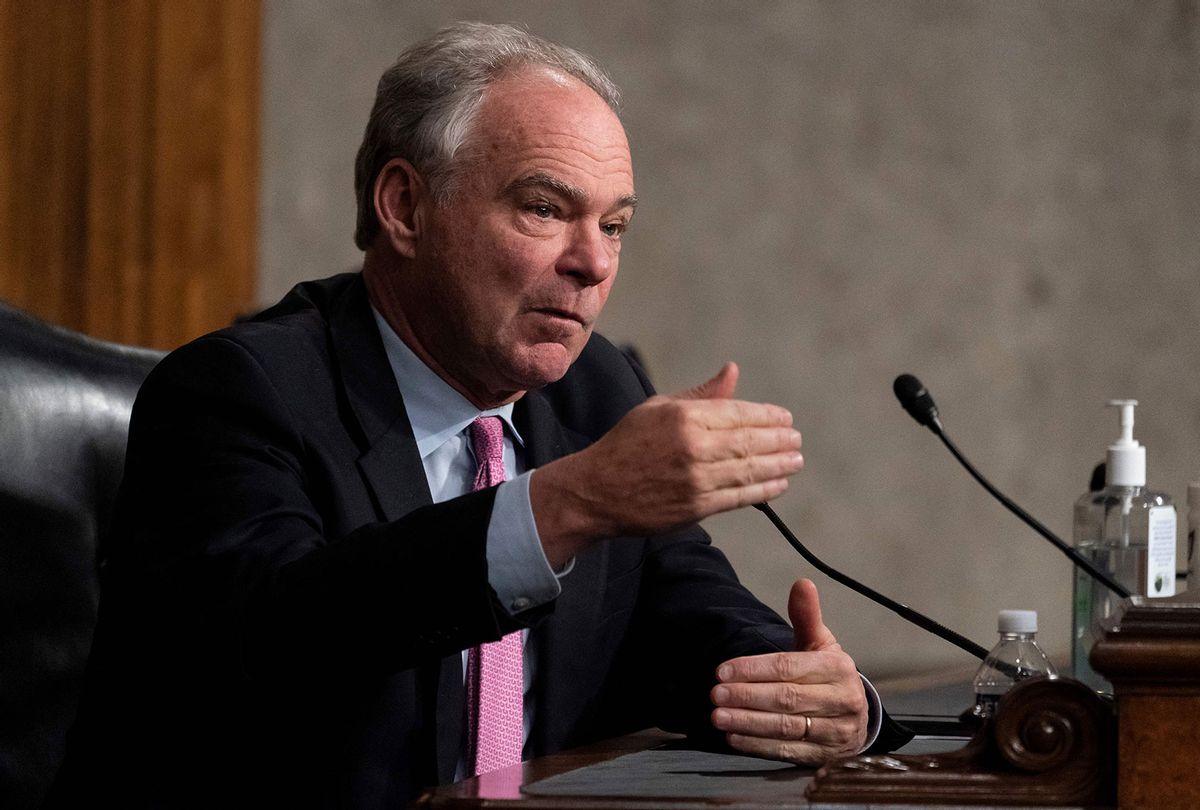 Senator Tim Kaine (D-VA), speaks during a hearing of the Senate Foreign Relations to examine US-Russia policy at the US Capitol in Washington, DC on December 7, 2021. (ALEX BRANDON/POOL/AFP via Getty Images)
--

Sen. Tim Kaine, D-Va., a former co-chair of the National Prayer Breakfast, has "no intention" of attending the event next year, a spokesperson says.

In the wake of recent calls for members of Congress to distance themselves from the event, TYT asked a handful whether they planned to participate in the February 2022 event. Kaine press secretary Ilse Zuniga responded, saying, "Sen. Kaine has not been to the National Prayer Breakfast since 2016 and has no intention of attending."

Zuniga did not say what led to Kaine's decision, but TYT's email referred to recent activist warnings that Democratic participation in prayer breakfasts helps far-right organizers expand their networks and mainstream their opposition to LGBTQ and reproductive rights.

Family spokesperson A. Larry Ross did not immediately respond to a request for comment. But Kaine's statement was applauded by two activist groups that have reached out to members of Congress with concerns about the private, secretive event.

"We're thrilled that Sen. Kaine has opted not to attend this pay-to-play political event that alienates nonreligious Americans, tramples the constitutional separation of state and church, and has a disturbing history of anti-LGBTQ bigotry," said Freedom From Religion Foundation (FFRF) co-president Annie Laurie Gaylor. The FFRF has long opposed the breakfast and had recently asked Kaine not to participate.

RELATED: Bias, theocracy and lies: Inside the secretive organization behind the National Prayer Breakfast

Another group raising alarms about the event is the European LGBTQ advocacy group Forbidden Colours. In response to TYT's reporting on anti-LGBTQ Ukrainians involved in the breakfast, Forbidden Colours sent congressional Democrats a briefing paper, saying that Rep. Juan Vargas, D-Calif., had been "misled" in participating in September's Ukraine breakfast organized by far-right anti-LGBTQ activists.

On Tuesday, Forbidden Colours executive director Rémy Bonny responded to Kaine's decision. "After ringing the bell for years about the deceptive methods of the anti-LGBTQ+ movement, it is great to see a senator finally seeing the real goal of organizations such as the National Prayer Breakfast," which Bonny described as "bringing the world back to a patriarchal society" and undermining the interests of the U.S.

Kaine — who served as the event's co-chair in 2016 until pulling out after becoming the Democratic vice presidential nominee — is only the latest Democratic member of Congress to distance themselves from the event, held every year on the first Thursday of February.

Others have included Reps. Charlie Crist of Florida, Ro Khanna of California, Ann Kirkpatrick of Arizona and Ted Lieu of California, as well as former Rep. Janice Hahn, now a Los Angeles County supervisor. Responding to recent reports that a longtime Chick-fil-A executive was inviting anti-LGBTQ guests to the breakfast, Norm Ornstein of the American Enterprise Institute tweeted, "Time to end this farce; create a genuine National Prayer Breakfast that is not a front for right-wing activists."

Due to COVID, this year's breakfast was held virtually, as next year's may be as well. (There has been no official announcement.) But President Biden and House Speaker Nancy Pelosi both submitted videos that were played as part of this year's virtual event.

Pelosi's office did not immediately respond when asked whether she would participate again next year. A White House spokesperson said about Biden's potential participation, "We will circle back with you when we have something to share."

In October, the FFRF wrote to members of Congress who served on the 2021 honorary host committee, asking them not to participate. Kaine was one of those Democrats, although it's unclear whether he specifically authorized The Family to use his name this year. Zuniga did not immediately respond to follow-up questions. One congressional staffer told TYT earlier this year that "they've had a hard time getting Democrats" to lend their names to the event.

Kaine has been on the honorary host committee three out of the past five years. He has a history of involvement with Capitol Hill prayer groups, defending the secrecy that surrounds them, and developing relationships with Family insiders on both sides of the aisle, including Sens. Chris Coons, D-Del., and John Boozman, R-Ark.

Like most Democrats, Kaine has a strong rating from the Human Rights Campaign. On the rare occasions when he and a handful of other Democrats have broken from HRC's agenda, it has often been on legislation involving religion, according to HRC's vote tracker.

Democratic allies of The Family, including Coons and Vargas, have refused to disclose specifics about how the breakfast is run or what due diligence, if any, is done to ensure both that breakfast invitations are issued equitably and that the event itself is not being used for political purposes. Even Democrats who have distanced themselves from the event have declined to discuss its internal workings.

While LGBTQ issues have drawn the focus of Forbidden Colours and other advocacy groups, the FFRF's list of complaints with the breakfast is much broader. It includes a number of revelations that have arisen from internal Family documents this year.

TYT has reported, for instance, that the breakfast's sole financial donor is evangelical pastor Franklin Graham, the son of Billy Graham and one of the world's leading anti-LGBTQ activists. (The Family's biggest known patron overall is Republican megadonor Ron Cameron). Despite Biden's well known religious faith as an observant Roman Catholic, Graham used Biden's participation in the 2021 National Prayer Breakfast as an opportunity to attack him for insufficient piety.

Amid right-wing grumbling that Biden didn't say the word "God" in his video for the breakfast, Graham said he was "saddened" by Biden's remarks, which Graham called "dangerous" for not reinforcing Christian theology.

The breakfast has also been used to elevate and, in at least one case, create extremist voices on the right.

Ben Carson became a right-wing cause célèbre for confronting Barack Obama at the breakfast. Then a handful of Family leaders and associates succeeded in converting MyPillow CEO Mike Lindell to both evangelical Christianity and right-wing politics.

According to Lindell's own accounts, the National Prayer Breakfast — including private side meetings and a speech by U.S. Senate chaplain Barry Black — helped to radicalize Lindell's politics and weaponize his faith. With support from Family insiders, Lindell last year became one of the most prominent voices preaching that Democrats had stolen the 2020 presidential election.

In February, TYT reported that a number of Family leaders and key players in the breakfast supported Trump's election lies almost immediately after the election — without losing any Democratic support for the breakfast.

These recent revelations come atop decades worth of secrets spilled by journalist Jeff Sharlet, author of multiple articles and two books on The Family, and one of the people responsible for Netflix's documentary series, "The Family." The organization's 20th-century roots, as Sharlet reported, lay in the Christian business community's backlash to the rise of organized labor and the New Deal reforms of Franklin D. Roosevelt.

Coe died in 2017, leaving Family leadership in the hands of conservative Republicans such as former Tennessee congressman Zach Wamp and former South Carolina governor David Beasley, who was later appointed by Donald Trump to run the UN's World Food Programme.

The following year, the Russian spy scandal became public — with Trump-supporting Family insiders at the heart of it.

A source who has been involved with the breakfast told TYT earlier this year that the event has changed. "We used to think we were nonpartisan: Democrats were welcome," the source said. "I was like, yes, that's true in many respects, but now that Trump stuff's here, there's a lot laid bare that's typical Christian conservative. It's a conservative Republican thing."

More from TYT on the National Prayer Breakfast and the shadowy organization behind it: