"Without action [on voting rights], I'm willing to say there's almost no future, no better future ahead for us" 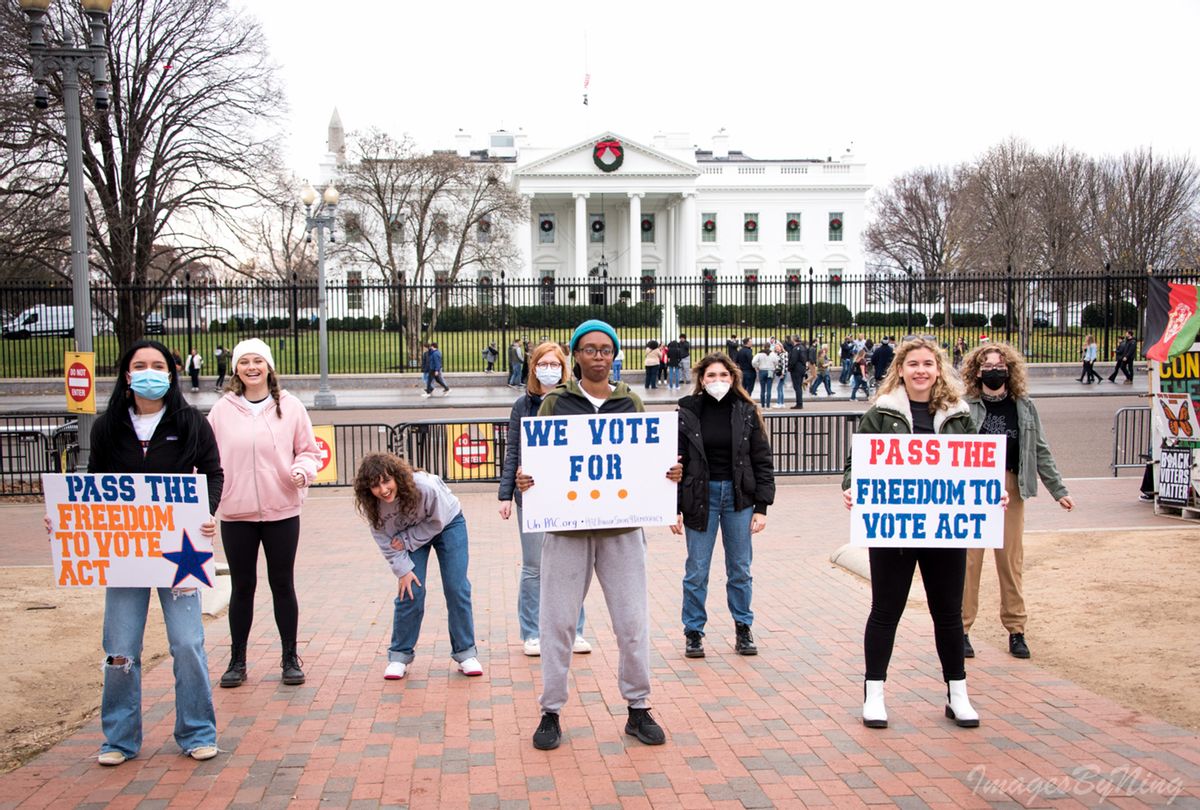 As the U.S. Senate suddenly turns its attention to a year-end push for voting rights legislation, it appears one Democratic member of the chamber in particular is standing in the way of its passage: Sen. Kyrsten Sinema of Arizona.

The enigmatic senator claims to support both the John Lewis Voting Rights Advancement Act and its successor, the Freedom to Vote Act. She remains, however, a fierce defender of the filibuster despite increasing pressure from the Democratic base and even as Republicans in state legislatures across the country continue to push increasingly restrictive election reforms that activists and watchdog groups say will disenfranchise large numbers of voters, many of them in minority communities.

So in a last-ditch effort to sway Sinema — and Congress as a whole — a group of students associated with the non-partisan advocacy group Un-PAC, which seeks to reduce the role of money in politics (many of them enrolled at Arizona State University) have embarked on a hunger strike. Shana Gallagher, the co-founder of Un-PAC and an organizer of the hunger strike, called it a "moral plea."

"Without action [on voting rights], I'm willing to say there's almost no future, no better future ahead for us," said Brandon Ortega, a student from Arizona.

The group, which marks Day 12 of its hunger strike Friday, said it hopes to see the passage of some form of voting rights legislation by the end of 2021. To that end, the group met with Sinema last week, virtually, to discuss their demands. But, as the Washington Post reported, the students remained in protest in front of the White House this week:

Too weak to walk long distances, they used wheelchairs to get to their protest spot at Lafayette Square. One hunger striker said it felt like knives were poking at her stomach. Another said she had lost more than 10 pounds. Others had to stop fasting on the advice of a doctor who checks their vital signs twice a day.

Reached by Salon for separate interviews this week, both Gallagher and Ortega said they were simply grateful to Sinema for taking the meeting — which they believe was her first constituent sit-down in many months — and hope that their continued persistence will finally sway her to change her mind, or at least accept some sort of compromise on the issue.

They've also met with nearly a dozen other members across both chambers of Congress, including Arizona Sen. Mark Kelly. Next up: they're hoping to sit down with President Joe Biden in an attempt to convince him to use his bully pulpit more forcefully on the issue, which they see as one of "existential urgency."

The following interview has been edited for length, clarity and context.

Brett: So it seems like the issue of voting rights sort of intersects with a lot of other issues, right? How are you going to change anything if entire communities are disenfranchised, or large numbers of people cannot access American democracy in the same way as other groups. I guess I'm just wondering where you see voting rights in terms of the bigger picture and why this is the issue that you all have honed in on?

Brandon Ortega: That's the whole reason why we're here. Un-PAC is an organization of young people from all different political affiliations. We're conservatives, moderates, liberals, independents and progressives — but no matter what issue you care about, voting rights is essential for solving it in a Democratic way. And that's not only true for my generation, it's true for any generation, as well as any group, especially in Arizona. We've had a group of veterans come out to list their concerns, and ultimately to show their support for us. And that was amazing. There are so many groups in Arizona that support this bill. I'm sure you know 84% of Arizonans support the Freedom the Vote Act.

Are you a native Arizonan?

Yes, I was born and raised in Phoenix and have lived here my entire life.

One of the people that I wanted to ask about is Sen. Kyrsten Sinema. It does seem like Sen. Sinema and the fate of the hunger strikers are sort of intertwined in a way. Were you involved in the recent meeting with her?

But at the moment, our priorities are now with the Biden administration, because they have the power to actually get this passed within the year. And I'm sure you've heard that the Build Back Better Bill has been pushed aside or pushed back, and they are now focusing on voting rights. So, hopefully we'll see some sort of announcement or response to our demands in the coming days.

So it doesn't sound like it was much of a surprise, then, when Sinema's office reiterated yesterday that she is opposed to doing anything with the filibuster. I guess I was just wondering how you guys felt about that? It seems to me, from where I'm sitting as somebody who follows this stuff on a daily basis, that if your goal is to pass the Freedom to Vote Act, this hunger strike might keep going until something's done with the filibuster.

We were very grateful and appreciative of Sen. Sinema meeting with us. I think we were the first group of constituents to have a meeting with her in, like, over a year. And so, yes, to answer your question, we are committed to an indefinite hunger strike until the bill passes. But there has been a lot of great progress in the last few days with the Biden administration pushing back Build Back Better to make room for voting rights discussions. That was a huge step forward, because we weren't sure if there was going to be even a vote on voting rights this year. That's what we were afraid of, at least. But we've had a lot of progress since the beginning.

Where do you see President Biden's role in all of this? And do you guys feel like he's doing enough to use his bully pulpit and his position of power to keep these issues in the spotlight?

So nobody in your group has eaten for, what is it, 11 days now? What is that like?

I mean, it's been hard on all of us. I think we're all very tired and hoping for a response soon, but that's what we started this fight for. We'd rather endure this than endure the horrific consequences of a dysfunctional democracy. And that's why the Freedom to Vote Act is so important to us. It's because our futures hang in the balance, and without action [on voting rights], I'm willing to say there's almost no future, no better future ahead for us."

Can you just start with the first day and take me through what you've been feeling each day as this has been going on?

Of course, we're being taken care of and supported by a medical team. We have our vitals taken twice a day, making sure that if anyone needs to stop for medical reasons, they will stop. And there have already been a couple of people forced to stop early because their body couldn't take it anymore. I think the third day was the hardest for a lot of people. But after that, not to get too deep into the biology of it, but the body starts shifting to its energy reserves. So it's a little easier, but it's still very taxing on the body. And of course it depends person to person, but some people it gets easier. Some people it gets harder with each day. Overall it's just been an uncomfortable situation, but a necessary one.

Definitely. Those are all the questions I had. I just wanted to say I do admire your strength — I hope you stay safe and I hope everyone is feeling okay as this thing hits its stride.

Thank you so much.