As the pandemic's third wave hits America, members of Congress look to cash in

Like the House members who profited from pharma stock, Joe Manchin is looking out for No. 1. Why be surprised? 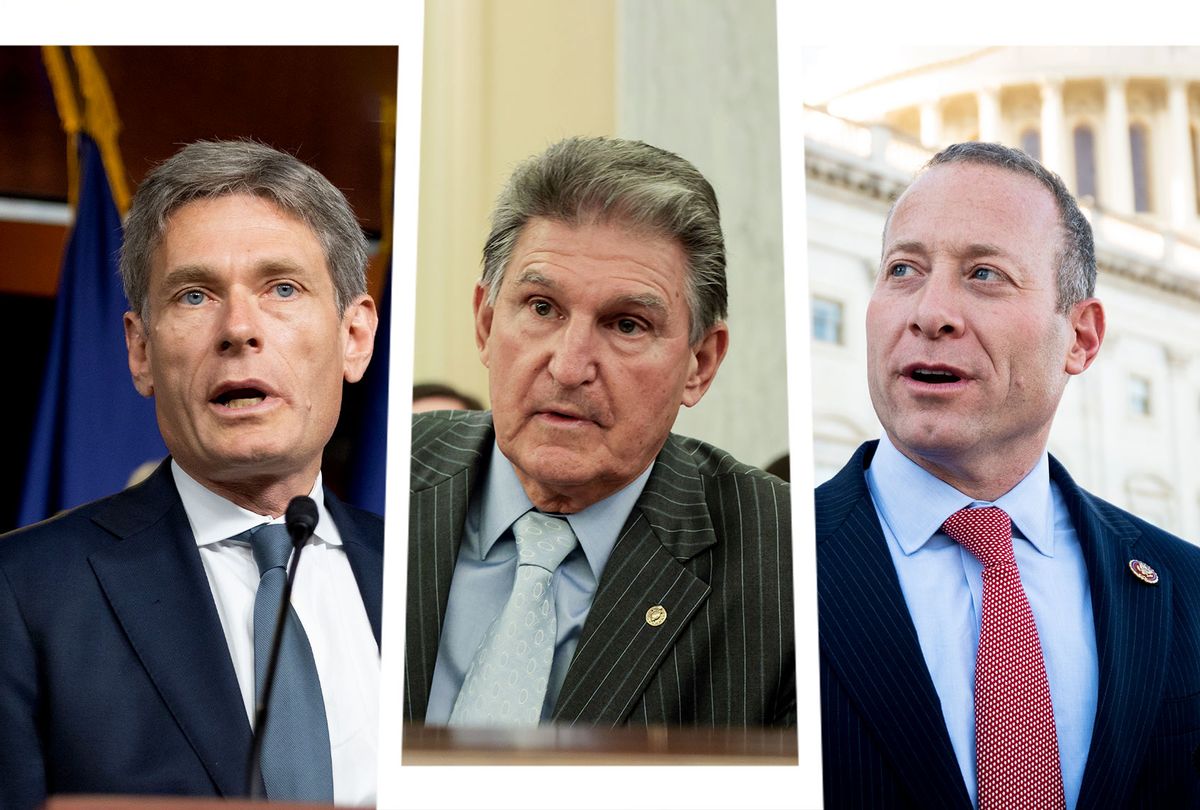 We have been here before. Americans at the end of 2021 are a fractured population with disparate views, lacking trust in each other or in our neighbors and unable to act in our collective interest, even while facing a common enemy. There's a creeping despair as death comes knocking again despite all our efforts to thwart its advance.

Or failure to act collectively increases the odds that people we know, even people we love, will continue to get picked off individually and in isolation.

It's a surreal juxtaposition — the trappings of the Christmas season, a celebration of faith and light mixed with the blinking red and green light of an intensive care unit.

Across the New York region and even the world, you could hear a groan of disappointment when Madison Square Garden announced that it was canceling Rockefeller Center's Christmas Spectacular, featuring the Rockettes, due to multiple COVID breakthrough cases.

How ironic. We had to cancel performances of the world's preeminent precision chorus line because of our inability as a state, region, nation or world to do anything in unison, whether it be to get vaccinated or simply wear masks.

Reading Alan Taylor's historical account "American Revolutions," I couldn't help but find the parallel to our time in the near-despair felt by Gen. George Washington before Christmas in 1776, after successive defeats on the battlefield undermined the societal support for the patriot cause.

RELATED: How Washington dealt with a pandemic — in the 18th century

"In New Jersey, most people abandoned the Patriot cause. Washington reported," Taylor writes, adding that 5,000 men accepted British pardons, including Richard Stockton, a signer of the Declaration of Independence. "Washington grimly understood that the people 'will cease to depend upon or support a force, from which no protection is given them.'"

Former patriots abandoned the collective notion of a new nation to cut deals in their own self-interest that might help them preserve or expand their own wealth, at the expense of the forward motion of a nascent nation on the verge of being stillborn.

"On December 25, Washington had 6,000 men, but their number would shrink to 1,400 with the expiration of most enlistments at the end of the week," writes Taylor:

He had one last chance to win the victory needed to reverse the downward spiral in Patriot morale. Washington saw an opportunity in the exposed Hessian garrison of 1,500 men posted across the Delaware at Trenton. But crossing the icy, twisting river was risky, and the Hessians were tough, veteran troops. ... Washington said that only "necessity, dire necessity, will, nay must, justify" an attack, for he had to "raise the spirits of the People, which are quite sunk by our misfortune."

Washington's success in surprising the Hessians set in motion his successful engagement with the rear guard of the British army at Princeton clearing the path for Washington's strategic move to seek sanctuary in the hills around Morristown.

By the following winter of 1777, Washington's army found themselves in Valley Forge, northwest of Philadelphia. Basics like food, shelter and fuel to stay warm were scarce. The snow was not, and material support to sustain the troops could only be had for cash on delivery.

They were at the mercy of what Washington regarded as

prosperous and selfish citizens who pursued profits instead of sacrificing for the cause: "Is the paltry consideration of a little dirty pelf to individuals to be placed in competition with the essential rights and liberties of the present generation, and of the Millions yet unborn? …  And shall we at last become the victims of our own abominable lust of gain?"

We are well into the second year of this killer pandemic, which is on the way to killing a million Americans and infecting more than 50 million. At the very least, we can expect 10 million, maybe more, of our fellow Americans to have long-term health consequences of varying severity.

Yet, with death and dying all around us, we are incapable of advancing the conversation about how universal health care should now be a national security or even a civil defense priority. Failing that, you would think we could make sure that all of our essential workers have free access to rapid in-home testing for COVID.

The White House's idea of being proactive is to tell insured Americans they should seek reimbursement through their insurers for at-home tests and to double the number of free tests they are sending out to community organizations from 25 million to 50 million. What about the several million workers who don't have access to health care?

Once again, what the Beltway is doing is too small and too slow. Perhaps it's because they are multi-tasking, acting more like those mercantile interests that Washington wrote about when the colonial troops were suffering in Valley Forge.

Incredibly, Sen. Joe Manchin, D-W.Va., declared on Fox News that he will not back President Biden's Build Back Better bill, which progressives had already shrunk from more than $7 trillion to $1.7 trillion in hopes of winning Manchin's support.

Recent disclosures that a member of New Jersey's congressional delegation was among the 75 members of Congress who held stock in Moderna, Pfizer or Johnson & Johnson during our ongoing pandemic tells you everything you need to know about why we remain such a stuck nation.

Business Insider ranked the 533 current members of the House and Senate based on a half-dozen criteria, including their compliance with the Stop Trading on Congressional Knowledge Act of 2012, which requires timely disclosure of members' investment transactions and those of their staff.

Four hundred and seven members of Congress were coded green for "solid," as in compliant. Another 113 members were coded yellow for "borderline," to signify that their actions "deserve greater scrutiny." But 13 others were coded red for "danger," signifying that they have "multiple issues that could expose them to ethical problems."

According to Business Insider's "Conflicted Congress" report, Rep. Josh Gottheimer of New Jersey's 5th district was one of just two lawmakers who held Moderna stock: "In May 2020, he sold up to $15,000 worth of his shares." Gottheimer was coded yellow for "borderline" when it comes to complying with congressional requirements.

Insider noted that in "early January 2020, a share of Moderna traded below $20. As the pandemic took hold, the stock's value grew exponentially. Moderna peaked in September 2021 at more than $455 a share."

Rep. Tom Malinowski of New Jersey's 7th district was one of the 13 members of Congress in the red zone. He sold up to $15,000 worth of stock in Chembio Diagnostics, a company that offers COVID-19 testing kits and infectious-disease testing, in the early days of the pandemic.

Last year, Malinowski failed to disclose dozens of stock trades, in violation of the 2012 law, which makes it illegal for members of Congress to engage in insider trading. According to Business Insider, he only acknowledged the trades after the news outlet reported them.

"Malinowski has since placed his stock assets in a qualified blind trust," reported Insider. "But he remains under investigation by the House Committee on Ethics after the independent Office of Congressional Ethics said it found 'substantial reason to believe' that Malinowski violated federal rules or laws designed to promote transparency and defend against conflicts of interest. The New Jersey lawmaker is one of 10 lawmakers who have taken the option to use a qualified blind trust, Insider found."

When House Speaker Nancy Pelosi was asked by reporters whether members and their spouses should be prohibited from trading stocks, she said no: "We are a free market economy. They should be able to participate in that."

As the AP reported, congressional stock trading "has taken on new urgency since the beginning of the pandemic, when suspiciously timed stock trades by lawmakers in both parties provoked outrage and led to multiple investigations. To date, no one has been charged in connection with stock trading investigations undertaken by the Justice Department and the Securities and Exchange Commission."

As much as we may believe our current circumstances are new and unique, the tension between our collective well-being as a society versus the prosperity of a few has been a consistent theme since before the nation came into existence. The great American tradition of self-dealing and using political office for wealth creation transcends political party and is a hidden tax on us all.

Does America have sufficient social cohesion to avoid a collapse from within? If George Washington had faced the level of vaccination resistance we have today when he ordered smallpox inoculation for his troops on Jan. 6, 1777, his army would likely not have persevered.

According to a research paper by Amy Lynn Filsinger and Raymond Dwek, America's successful war for independence "must be partially attributed" to Washington's decision to inoculate his troops against smallpox, a contagious, disfiguring and deadly virus. "Among the Continental regulars in the American Revolution, 90 percent of deaths were caused by disease, and Variola the smallpox virus was the most vicious of them all," the authors write.

On that January day, Washington wrote to Dr. William Shippen Jr., "ordering him to inoculate all of the forces that came through Philadelphia." Washington explained that "Necessity not only authorizes but seems to require the measure, for should the disorder infect the Army ... we should have more to dread from it, than from the Sword of the Enemy."

Nearly 245 years later, it's our lack of national solidarity, along with political corruption and shameless self-dealing, that threatens to defeat us entirely.

More on the culture of corruption that's poisoning American politics: