It's time to "take the kid gloves off": House progressives call on Biden to deal with Manchin 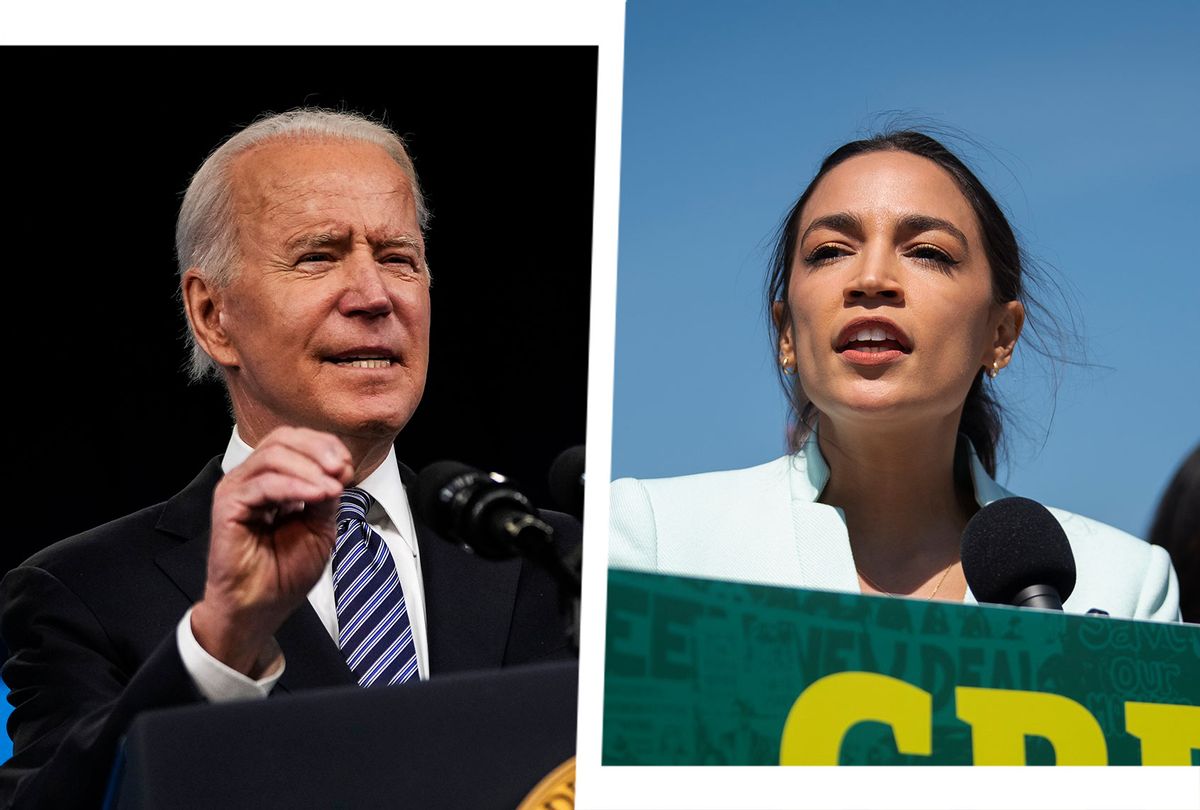 Congresswoman Alexandria Ocasio-Cortez on Monday suggested Sen. Joe Manchin's explanation for why he's opposing the Build Back Better Act is baseless as she called for a different "environment of pressure" by Democratic leadership to confront his obstruction.

"Make him take that vote."

Ocasio-Cortez's remarks to MSBNC's "Morning Joe" came a day after Manchin (D-W.Va.) announced on "Fox News Sunday" that he was a "no" on President Joe Biden's signature legislation, opposition he pinned on being unable to explain the measure to his constituents.

According to the New York Democrat, who called the senator a "known ally of the fossil fuel industry," Manchin's announcements marked "an egregious breach of the trust of the president" and an outcome progressives—who had demanded passage of the BBB and now-passed bipartisan infrastructure bill be linked—warned about.

She described the political situation as "not beyond repair," however, and called for Democratic leadership to start using "a very large number of tools at their disposal."

"It's really about time that we take the kid gloves off and we start using them to govern for working families," said Ocasio-Cortez.

Deeper economic hardship is just around the corner for many Americans, she said, with the Child Tax Credit expiring and student loan payments scheduled to restart. Those two factors combined with the "untenable issue of voting rights," she said, "are completely unacceptable."

What's needed now, she said, is "a different kind of thinking," including reforms to what she described as fundamental issues with how the U.S. Senate works, especially the fact that senators merely need to raise the threat of a filibuster to obstruct critical legislation.

Elevating demands made by other progressive lawmakers over the past 24 hours for the Senate to return to session and for Manchin and Republicans to have to go on record for oppositing the bill, Ocasio-Cortez said: "Make it tough."

Ocasio-Cortez said that Manchin should "have to stand in front of [his] constituents and say, 'No, I'm going to... take the food out of.. kids' mouths. Make him take that vote."

"We have to stop giving people a get out of jail free card," she added. "Enough."

Ocasio-Cortez also called Manchin's explanation for opposing BBB "a farce" that can't be taken at face value. "In terms of plain democracy," she said, "I represent just as many people or more than Joe Manchin does."

Beyond that, she said, "if you can't explain to your constituents why the child tax credit that they are getting right now to help feed their kids in a time of record-high prices should not be extended, that doesn't seem like a problem with his constituents," suggesting that "there's a different reason behind this vote."

The New York Democrat also addressed the climate provisions at stake in BBB.

"We cannot allow the climate crisis to become a catastrophe," she said, "which is what is represented right now with this bill going by the wayside or being trimmed down any further."