This beloved French Christmas dessert is made with . . . chard? 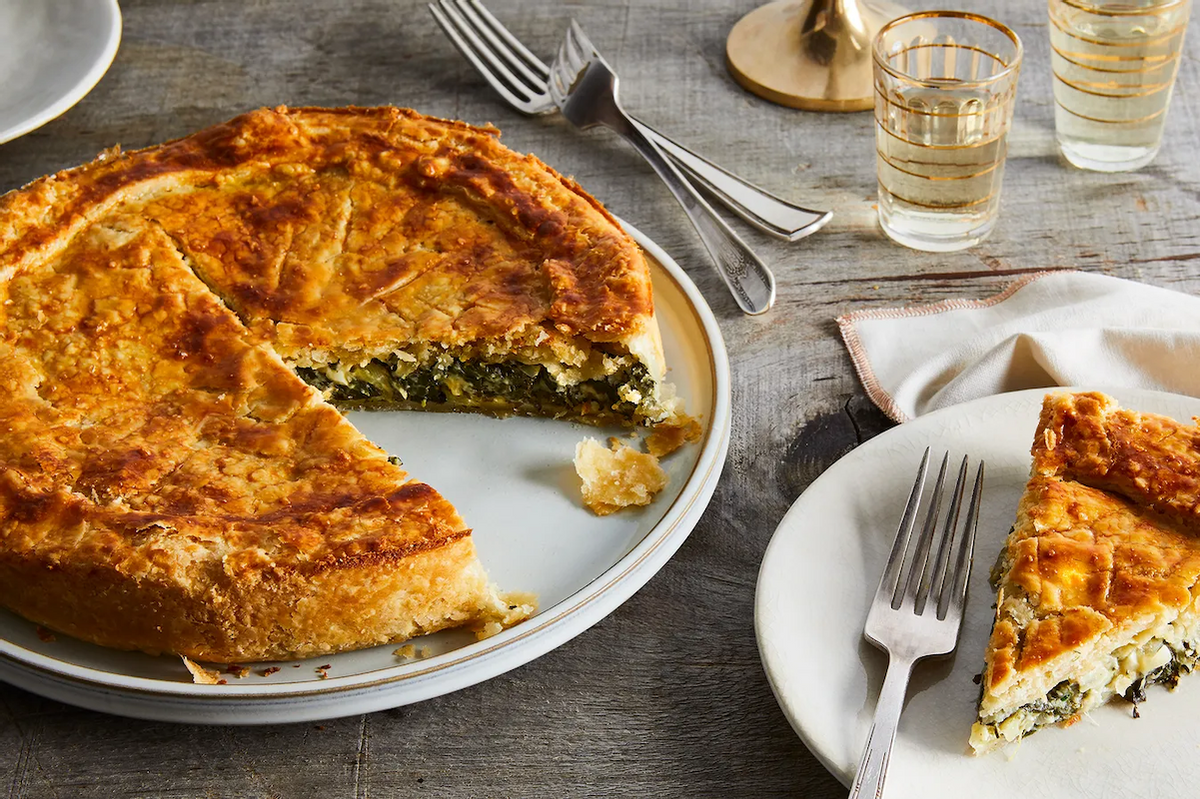 Head to any local purveyor of Niçoise specialties (from the chickpea flatbread known as socca to tuna-stuffed pan bagnat), and the dessert on offer will likely be a rectangular tourte de blettes: two slabs of buttery pastry, covered in confectioners' sugar, sandwiching a deep emerald filling made with pine nuts, apples, raisins, and Swiss chard.

No, that's no typo. A sweet Swiss chard pie might seem like an oddity at first, but locals are as besotted with this veggie-based sweet as the Japanese are with adzuki bean mochi or Americans with carrot cake, zucchini bread, and pumpkin pie.

"I used to live upstairs from a bakery called Espuno in the Old Town, which sadly no longer exists, and I discovered tourte de blettes when we moved to Nice in 2004," recalls Canadian expat Rosa Jackson, founder and owner of local Les Petits Farcis cooking school. "Something about it, I guess the raisins soaked in rum, reminded me of mincemeat pie, which I make at Christmas because of my British background."

The dessert — and local affection for chard in any form — dates to long before the 16th-century arrival of other ingredients now practically synonymous with Mediterranean cuisine, like tomatoes, eggplant, and zucchini.

"Chard is our base vegetable, you know?" said local culinary historian Alex Benvenuto. The vegetable is so plentiful, it's even in a quirky nickname residents have for themselves: caga blea, or roughly "chard pooper" in the local dialect. "In French, it's vulgar," said Benvenuto. "But in Niçois, it's nice." Locally, he said, chard is "the essential ingredient in any stuffing, be it sweet or savory, from farcis, or stuffed vegetables, to local ravioli to, of course, tourte de blettes. "Chard is part of our identity," he said. "It's our history."

Given chard's omnipresence, it's hard to know when exactly locals first opted to bake it into a sweet pie. Benvenuto notes that the dessert was "emblematic enough" to appear in the very first cookbook on Niçoise cuisine, "‎La cuisine à Nice en usage à l'Ecole Hôtelière de Nice et du Littoral," written by culinary instructor and chef Henri Heyraud and published in 1909. That recipe featured a flour- and butter-based dough sweetened with sugar, and bound with eggs and local olive oil.

"Going back in time, tourte de blettes would have been made with an olive oil pastry," notes Jackson. "But these days most bakers prefer a butter pastry that is on the crumbly side, more of a pâte sablée."

The filling features chard leaves only, no ribs. Indeed, many different varieties of chard are grown in Nice, and the most common for this cake is the leafy "spinach chard," with very thin or no stems. The mixture is sweetened with Reinette apples and raisins soaked in rum, as well as local eau-de-vie or Pastis.

These days, most locals don't actually make the time-consuming pastry at home, instead snagging some from a restaurant or a local bakery. "Very honestly," said Benvenuto, "most bakeries make an excellent tourte de blettes."

At Chez Pipo, a restaurant outside Nice's historic center, manager Steeve Bernardo notes that tourte de blettes is "by far our best-seller." His version is made with a buttery pâte brisée and is served at room temperature. "If it's too cold, the butter makes the dough tough," he said. He also forgoes the confectioners' sugar featured in most versions and uses granulated sugar instead, which pre-dates the powdered stuff, and, he said, creates a more balanced finished product. "Confectioners' sugar sweetens the dessert too much, and it masks the flavor of the filling." The same, he said, is true of the cinnamon that some have started adding to their iterations of the classic.

As for the point of being so exacting, for Bernardo, it's simple: neither to hide nor to highlight the flavor of the chard. "The chard greens used in the recipe are really quite neutral in terms of flavor," he said. "Much more neutral than spinach, for example," which, he said, some use once chard season is over (to the detriment of the dessert). "The flavor of this vegetable becomes too pronounced and dominating," he said of spinach. "The marriage of the ingredients, essentially the apple and marinated raisins with chard, lends a balanced flavor to the dessert."

At René Socca, an emblematic restaurant in the heart of historic Nice, meanwhile, Zélie Bonge notes that a pâte sablée or shortbread crust and a topping of confectioners' sugar are preferred. But the same ultimate goal — balancing the chard without hiding it — remains true.

"Clients who aren't familiar with it are sometimes skeptical," said Bonge, who is the daughter and niece of two of the restaurant's managers. "I think it's something you either love or you hate." When she was younger, even the native Niçoise said, "you couldn't have paid me to eat a tourte de blettes. But as I got older, I tasted it, and what I found pleasantly surprising was that light sweetness."

Today, locals are René Socca's best customers. While curious tourists often order one piece for a group, just to taste, "they're not that curious," she said. "So Niçois people, who like it, are the ones who get it most often."

The only time locals really make this dessert at home, according to Benvenuto, is at Christmas, when it features prominently as the centerpiece of the traditional Thirteen Desserts: a panoply of dried fruits, nuts, and more that conclude the Yuletide meal in Provence. "It's a pretty long recipe to make," he said, noting nevertheless that it's an essential part of local culinary tradition.

"Tourte de blettes is one of our favorite ways to introduce children to cooking," he said. "You get little kids to get their hands dirty as early as three years old. It's a transmission tool."

Jackson teaches her version of the recipe both in person in Nice and online. Her recipe is fairly traditional, with a healthy dose of rum. But neither she — nor Bernardo nor Bonge, for that matter — add one last secret ingredient Benvenuto said is "indispensable" to a true tourte de blettes: grated cheese.

"At the end of the 19th century, there were no apples yet, but there was already cheese," Benvenuto said of the handful of Parmesan or Swiss Sbrinz added to the filling in Heyraud's recipe. He's adamant that despite this addition, tourte de blettes cannot and should not be categorized as a mix of sweet and savory. Rather, the cheese adds just the barest hint of richness and depth to the filling. "It helps bring out the sweetness," he said. "That's the real secret."

For David Lebovitz's tourte de blettes recipe — which does include cheese, click here.