What are marrons glacés from "The French Dispatch"?

In the new Wes Anderson film, the chestnut holiday treats are powerful enough to bribe a prison guard 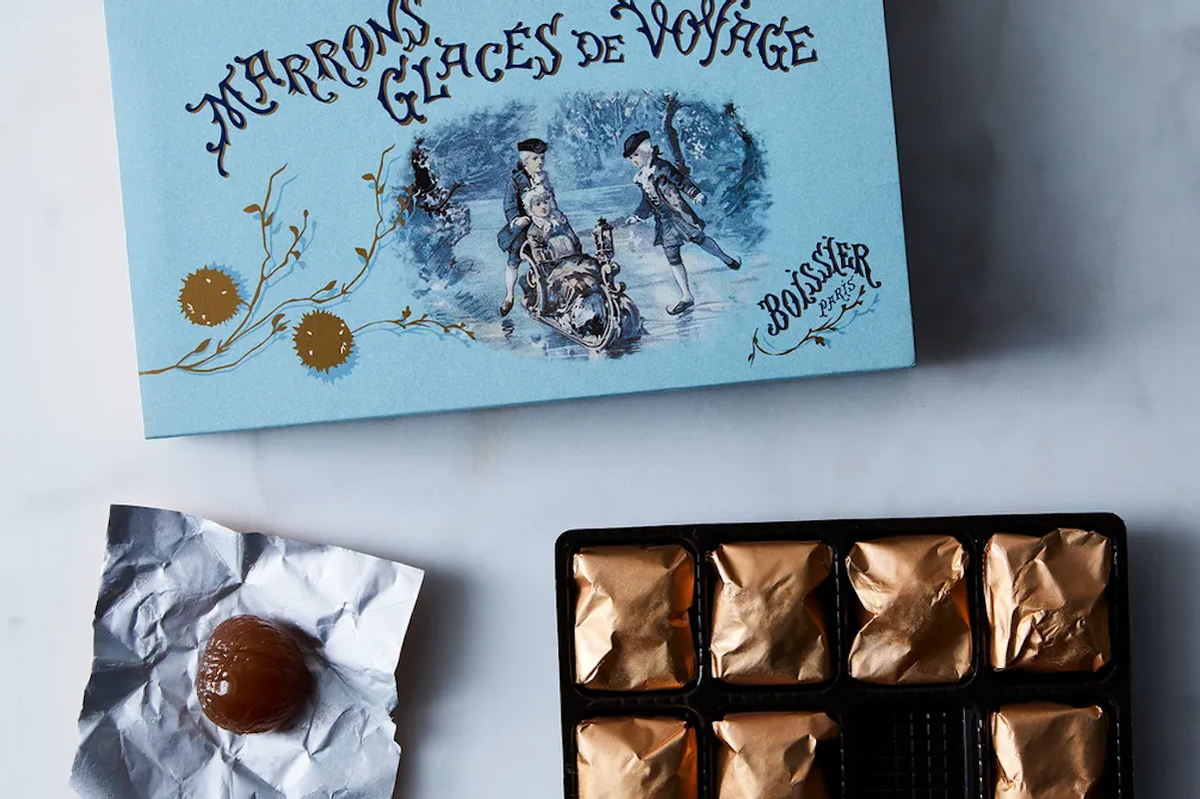 In Wes Anderson's new movie "The French Dispatch," slippery art dealer Julian Cadazio (played by Adrien Brody) bribes a prison guard with a marron glacé, or candied chestnut. The stone-faced guard unwraps the bite-sized confection and pops it into his mouth. Watching the film in a theatre near the Palais Garnier, I found the casting choice of marron glacé highly satisfying. Like the aperitif trays and old world locales, it was one of many rich details of French life that Anderson wove into his tableaux.

Marrons glacés are a fixture of the holidays in France. Marrons, a special chestnut from the Ardèche region, are harvested in early fall and their delicate candied form proliferates in sweets shops around the country in mid-November. With their stylish packaging and Willy Wonka-esque colorful wrappers, they're a lovely and timeless gift idea. Take it from Proust, who mentions them as a New Year's gift in his great masterpiece Swann's Way (which I am yet to read but I do know that the crumby madeleines made a greater impression).

While marrons glacés are the kind of cultural touchpoint that most expats observe with rosy-hued appreciation, I can't say I've always understood the hype (or the price tag — a box of eight from the iconic Angelina will set you back 38 euros; to be fair, you can buy the same at frozen food mecca Picard for 12.95). But perhaps I'm biased by experiences with their roasted cousins, which are sold in France (and neighboring Spain and Italy) in paper cones as a wintry street food. I've been seduced by their earthy, smoky aroma only to be disappointed by a taste that leaves something wanting. And then there's the charred bits, which are a little too reminiscent of ye olde Christmas chimney. The French, however, are masters of making humble ingredients exquisite. Consider the croissant: Butter and dough folded with patience into something sublime. I trust them, if anyone, to sway this skeptic on fancy chestnuts.

To better understand the allure of France's famed holiday treats, I reached out to Sophie Dolfi, who along with her father and three siblings, runs À la Mère de Famille, confectioners since 1761 and the cult spot to score marrons glacés in Paris. Dolfi told me that marrons glacés have been a holiday staple since the days of Louis XIV, and though the time-tested recipe for candied chestnut was never broken, she was determined to fix it.

"I really like the flavor of the marron itself and found that oftentimes marrons glacés tasted mostly like sugar," Dolfi told me by phone. "I was a bit obsessed with making a marron glacé that wasn't too sweet, which isn't easy because the sugar tenderizes and conserves the marron." She continued, "You need an equilibrium between the sugar, the vanilla, and the marron."

And so, Dolfi worked with an expert artisan for years to achieve the specific flavor profile she had in mind. "After 10 years of tests, we finally achieved a recipe, the 'recette mere de famille,' which we sell in the boutique today."

I asked her how many days it takes to prepare marrons glacés and whether it's possible to tackle at home.

"Oh la la. It's a long time," said Dolfi. "It's a real craft to make the marron glacé and there's a huge number of steps. There's the cooking, then you let them rest, then you dip them in a bath of sugar syrup, and repeat five or six times, draining the syrup after each time." I told her that it sounded pretty impossible. "It's not impossible to do at home, but you'd need a lot of time and patience. The quality of the marron is also very important." Like baking baguettes and dying my eyebrows, this one seems better left to the experts. (There is, however, a recipe for marrons glacés in their Wes Anderson-esque cookbook.)

I asked if marrons glaces are their most popular holiday purchase and Dolfi said that the crown rests with their chocolates (which, I can attest, are extraordinary — I especially love their paper-thin chocolate disks that melt on the tongue like a Catholic host).

"The marron glace takes so much time to produce, which is why it's rather expensive. It's not the most popular gift, but it is a very precious gift."

After a visit to À la Mère de Famille's storybook-charming ninth arrondissement boutique, I finally got my hands on a dainty sleeve of their famed marrons glacés. Later that evening, after a dinner of leftover soupy rice, I unwrap one and take a moment to admire it. It looks like a translucent little brain, about the size of a walnut, and the color is dewy gold. I bite it in half, to slowly savor, and am instantly converted. At the risk of sounding sappy, it is transcendent. The texture is tender, almost fruity, and the sweetness is elegant, not cloying. It bears no relation to the roasted nuts of the paper cone and as I peel the bronze wrapper from a second marron glacé, I think, I get it. I'm filled with appreciation for French savoir-faire. They truly are a precious gift, to bribe someone for information, or to give someone you love.