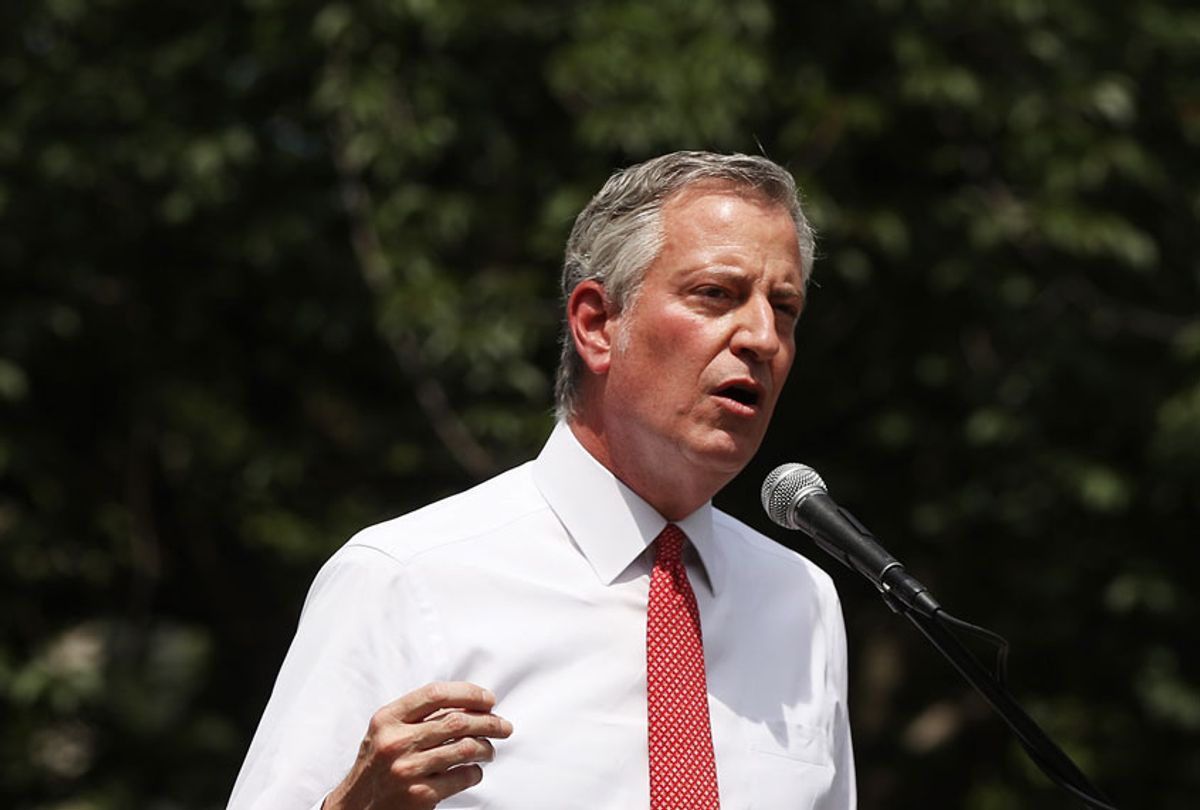 Maybe it took a politician with little to lose in order to get it done.

On Monday, Bill de Blasio, the outgoing mayor of New York City, announced the most sweeping COVID vaccination mandate yet seen in the U.S. At least, by appearances that's what he did. What de Blasio's order may actually wind up doing is giving cover to business owners who have long wanted to put mandates in place, but weren't eager to face personal blowback from their employees.

They can blame the city now. First in an interview on MSNBC and later at a news conference, de Blasio, whose mayoral term expires Dec. 31, said that in-person workers at all private businesses in New York City must receive at least their first dose of a COVID vaccine by Dec. 27. Although medical and religious exemptions will be considered, there is no regular testing alternative. It's a firm requirement.

It also has range. While most estimates suggest that 90% of adult residents in New York City have received at least one dose of vaccine, de Blasio's order affects some 184,000 private businesses, many of which employ workers from outside the city area. The mayor said he'd announce detailed guidelines on the new rule by Dec. 15, including penalties for businesses that don't comply.

The measure is "a preemptive strike," de Blasio told MSNBC. "Omicron is here, and it looks like it's very transmissible. That's just going to make a tough situation even harder. The timing is horrible with the winter months." Later, speaking with reporters, de Blasio added, "We need to take very bold action. We're seeing restrictions. We're seeing shutdowns…We cannot have shutdowns in New York."

In many ways, this is a straight business pitch: Vaccination compliance keeps workplaces safe and the doors open. But as Emily Gee, a senior fellow in health policy at the Center for American Progress, told the New York Times, "Employers are hesitant to mandate vaccines, particularly in areas where there is a lot of hesitancy and where vaccines have been politicized."

This politicization has led to dramatic divides in vaccination rates. In October, the tenth of the country that skewed the reddest in the last election experienced COVID death rates that were six times higher than those of the bluest tenth, with much of the difference attributed to vastly lower vaccination rates in the reddest areas.

Taking the decision out of the hands of individual businesses via city mandate may be an end around some of that political pushback. New York is hardly the South, but while private companies have always had the ability to require that their workers be vaccinated, only about half of employers in New York City have done so.

The city's legal advisers are confident that its health arm has the right to enforce such a mandate, since it's broad-based and does not single out any particular institution or business unfairly. The local rule also stands in contrast with President Joe Biden's recent attempt to order worker vaccination for all larger private companies in the U.S., which is being challenged on the grounds that the federal Occupational Safety and Health Administration is overstepping its legal authority.

New York City's adult vaccination rate is relatively robust, but it already has several documented cases of the omicron variant, and the city's health department says COVID case rates overall are again on the rise. Like many cities, New York long ago required vaccines for its municipal and health workers. But no major American city has required its private businesses to be fully inoculated before now.

De Blasio is about to end his second term. With no political capital on the line, he is perhaps well suited to withstand criticism of the safety rule. But de Blasio also said he had spoken with incoming Mayor Eric Adams and was confident that Adams would want to continue the mandates, adding, "He has been really consistent on the point that he's feeling urgency about these new threats."

A bigger question, perhaps, is whether leaders of other cities will follow New York's lead.

From the start of the pandemic, local control has often proved more effective than broader-based efforts to enforce mask or vaccine mandates. In California, statewide health guidance has been erratic and subject to legal challenge, and the vaccine rollout was so badly handled that local health departments asked for — and received — permission to essentially take back control of their allotted doses.

San Francisco would seem a good bet to enact a rule similar to New York's. The city already has seen 85% of its population receive at least one dose of vaccine, and was well ahead of the national curve in requiring proof of vaccination for entry into indoor restaurants and bars, gyms, concert halls and other such congregate settings. Los Angeles recently began requiring similar proof for such venues, but it's unclear what the political appetite would be for a private-employer mandate.

Not much about the omicron variant is known with any degree of certainty. The concern, though, is justified: Early research in South Africa, where the strain was first observed, indicates that omicron may spread many times faster than the delta variant, which itself was twice as transmissible as earlier COVID strains. Coupled with the recent relaxation of precautionary measures in many parts of the U.S., such as mask mandates and limits on group gatherings, the holiday season that began last month and continues through year's end is a ripe target for renewed spread of the virus.

That may not mean that other cities will move immediately to enact a rule requiring that workers in private businesses be vaccinated. But it will be surprising if Bill de Blasio is the only mayor who winds up making such a pronouncement. As de Blasio said of New York, most cities can't take another shutdown — and major threats often call for major actions.