Stray planets are more common than we thought: Astronomers find 70 "rogue" planets in our galaxy

And there could be more, raising questions about the origin of these dark, nomadic worlds lacking parent stars 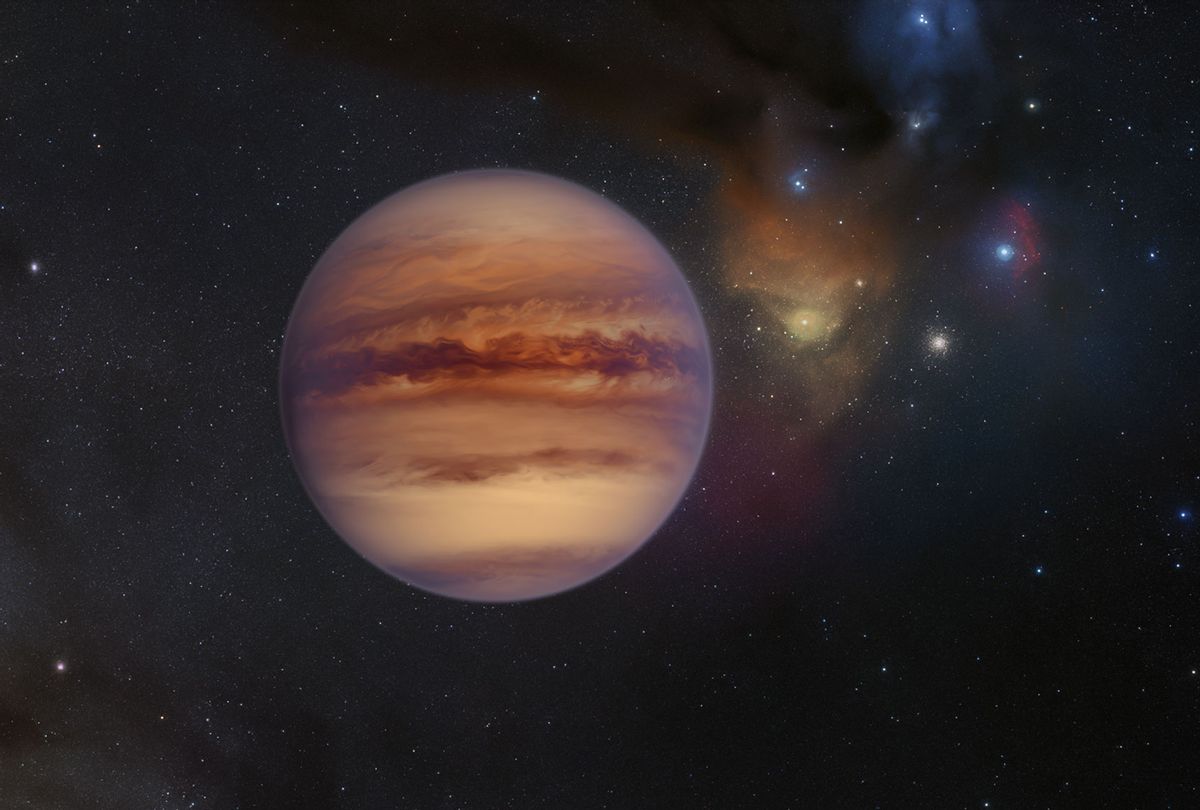 This artist’s impression shows an example of a rogue planet with the Rho Ophiuchi cloud complex visible in the background. Rogue planets have masses comparable to those of the planets in our Solar System but do not orbit a star, instead roaming freely on their own. (ESO/M. Kornmesser)
--

According to our current understanding of solar systems, planets generally form out of the same nebulas that produce the stars that they orbit. This is why the landscape of the galaxy looks as it does — a series of stars every few light-years, most with multiple planets orbiting them.

Because of this, rogue planets — meaning planets that drift in the darkness in-between stars, gravitationally loyal to no sun — were not believed to be a common occurrence. Yet sometimes it so happens in the astronomy world that scientists discover what they previously believed was a rare phenomenon is actually somewhat common.

A planet, by definition, is a celestial body that orbits a host star; but not all do. Some planets float aimlessly through space with no host star to orbit. According to a new research published in the journal Nature Astronomy, scientists have discovered at least 70 lost-soul exoplanets in our galaxy, suggesting that they're not as rare as scientists previously thought.

"We did not know how many to expect and are excited to have found so many," said Núria Miret-Roig, an astronomer at the Laboratoire d'Astrophysique de Bordeaux, France and the University of Vienna, Austria, and the first author of the study.

Scientists say the discovery is the largest group of "mysterious galactic nomads" ever found. Miret-Roig and fellow researchers discovered the group of lost exoplanets by studying data spanning over the last 20 years from telescopes operated by the European Southern Observatory (ESO).

"The vast majority of our data come from ESO observatories, which were absolutely critical for this study. Their wide field of view and unique sensitivity were keys to our success," said Hervé Bouy, an astronomer at the Laboratoire d'Astrophysique de Bordeaux, France, and project leader of the new research. "We used tens of thousands of wide-field images from ESO facilities, corresponding to hundreds of hours of observations, and literally tens of terabytes of data."

The lost planets were found using a clever astronomical trick. Though one might think a lone planet without a sun would be freezing cold, such planets — particularly gaseous ones with radiative interiors, like Jupiter and Saturn — are apt to still be far warmer than the background temperature of space, which is only a few degrees above absolute zero. That means that such a world would still emit a faint glow, detectable in contrast to the background of space. Astronomers suspected such worlds would be perceptible using the sensitive cameras on large telescopes, though their glow would be very faint.

They were right. Using this technique, scientists successfully found at least 70 new rogue planets with masses comparable to Jupiter in the Upper Scorpius and Ophiuchus constellation of the Milky Way galaxy.

"We measured the tiny motions, the colors and luminosities of tens of millions of sources in a large area of the sky," Miret-Roig explained. "These measurements allowed us to securely identify the faintest objects in this region, the rogue planets."

Notably, scientists believe that this could be just the tip of the iceberg in discovering rogue exoplanets.

"There could be several billions of these free-floating giant planets roaming freely in the Milky Way without a host star," Bouy speculated.

Scientists don't know exactly what causes a planet to go rogue in the universe, but they do have a suspicious that these unique celestial bodies form when a gas cloud is too small to lead to the formation of a star; or maybe, for some strange cosmic reason, their parent star(s) kicked them out of the solar system due to some gravitational mishap, such as an interaction with a larger massive body or an irregular orbit.

Regardless, researchers hope that further advances in technology will help unlock the mystery of these cosmic nomads.

"These objects are extremely faint, and little can be done to study them with current facilities," Bouy said. Bouy noted that the Extremely Large Telescope, currently under construction in Chile and likely to be the largest telescope ever built when complete, will be "absolutely crucial to gathering more information about most of the rogue planets we have found."