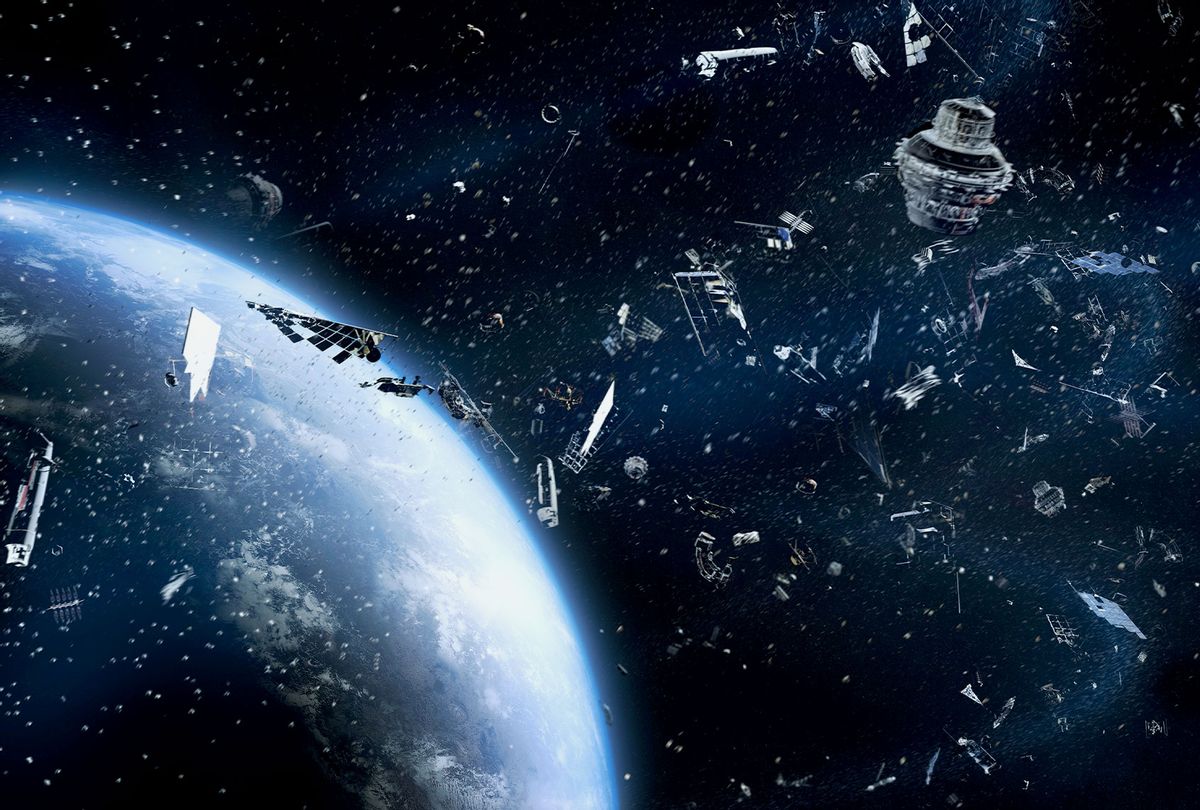 Saturn's rings make it arguably the most photogenic planet in the solar system. First discovered by Galileo Galilei in 1610, the rings are made of countless particles comprised primarily of water ice, which form a giant cluster that circles around the planet's central sphere. From a distance they appear quite beautiful, and are even more picturesque when perceived up close.

One doubts that astro-photographers from another planet would have a similar romantic view of the rings that humans are creating around Earth as it becomes increasingly strewn with our space junk. Even so, a new study in the scientific journal Nature describes how humanity's commercial and governmental satellites (and satellite debris) are on course to give Earth its very own ring.

The term "space junk" refers to the 170 million or so objects that circle Earth's orbit, most of them spinning furiously while traveling at speeds of roughly 15,700 mph (in low Earth orbit), either because they are abandoned spacecraft or broke off of them. The smallest pieces of space junk are mere centimeters in size, chips of metal or flecks of paint that peeled off of an object or vehicle. Roughly 29,000 objects are larger than a softball, however, meaning they could cause serious damage to any humans or equipment that have the misfortune of colliding with them.

That is why the Department of Defense tries to track the larger objects; while most space junk burns up in the atmosphere before landing on Earth, 200 or 400 pieces land somewhere on the surface every year. Between the risk of having space junk land near your home (as happened to a farmer in Washington state earlier this year) and the possibility that satellites you depend on could get knocked out of commission at any moment, it is safe to say that the problem of space junk is quite serious.

And that doesn't even account for the sheer ugliness of an Earth surrounded by clutter.

"Earth is on course to have its own rings. They'll just be made of junk," Jake Abbott, a robotics professor at the University of Utah, told The Salt Lake City Tribune. In the study that Abbott and his colleagues published for Nature, they described how it might be possible to clear up space junk using magnetic technology. Because even non-magnetic space junk can conduct electricity, Abbott and his fellow researchers argue that you can use controlled force and torque to slow the objects that are spinning so they can eventually be moved and collected. If their proposal works, they could provide a means of moving space junk without directly touching it.

That's important, because if their satellite junk-cleaners do come into contact with fast-moving spinning objects, they will likely tear apart, thereby creating even more space junk to be cleaned up.

Abbott's team is not alone in recognizing the threat posed by space junk. NASA has also repeatedly expressed concern about it, President Donald Trump's administration put together a plan for reducing space junk (it is unclear if serious efforts were made to implement it) and the Japan-based company Astroscale is constructing a spacecraft that can test strategies for removing space junk. The imperative to address this problem is increasing as manned commercial spaceflights, such as those undertaken by billionaire space entrepreneurs Elon Musk and Jeff Bezos, become increasingly common.

If there is any good news about space junk, it is that it has offered engineers a chance to innovate in unexpected ways that sometimes seem like they came straight out of a science fiction movie.

"We've basically created the worlds first tractor beam," Abbott told the Tribune. "It's just a question of engineering now. Building and launching it."