Why yellow cake is so important to Black celebrations

From a box or from scratch, it's an essential element of my community 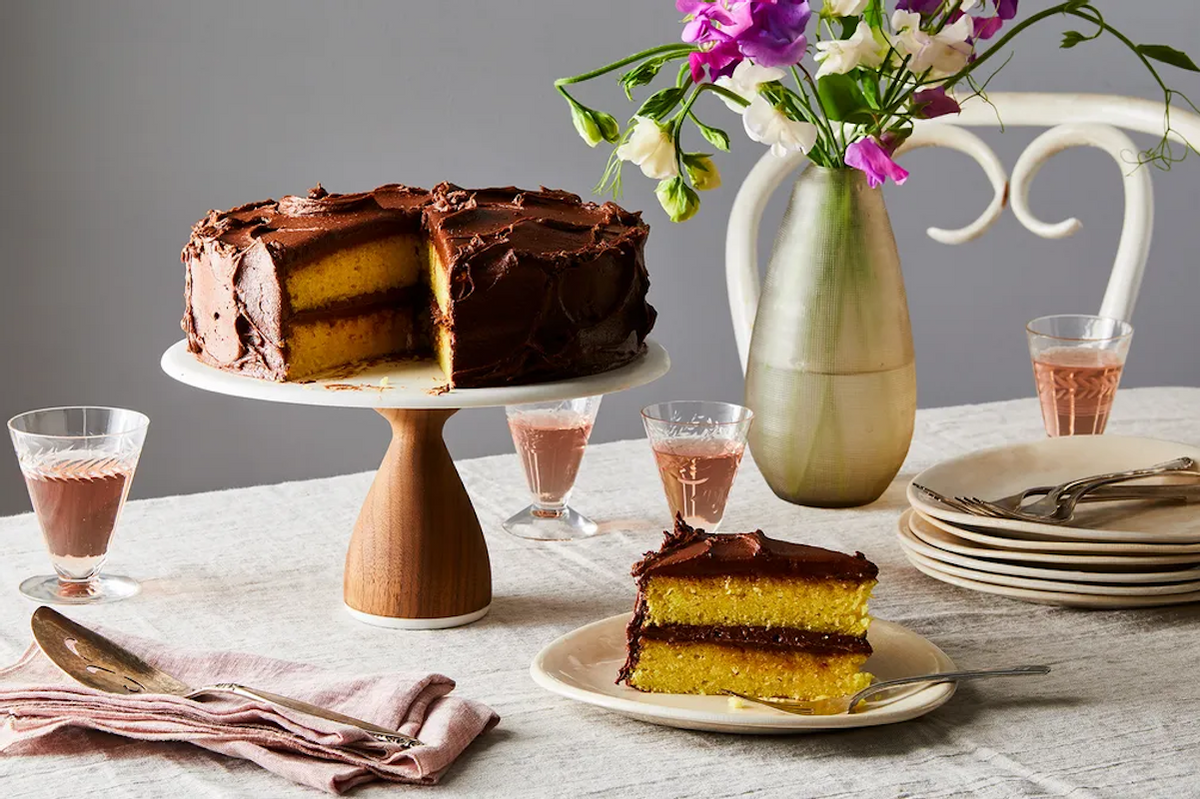 Early in my relationship with my current partner, he threw a small birthday party for me. We went to a local bakery a few days before the party to order a cake. When the baker asked what kind I wanted, I said yellow cake with chocolate frosting. The baker had no idea what a yellow cake was, and my boyfriend said that yellow wasn't a flavor.

I strongly believed, and still do, that not only is yellow a flavor, it is the only flavor when it comes to cake. Growing up, yellow cake was the only cake served at birthday parties. It was always present in the fellowship hall after church services and was the first cake to sell out at bake sales. I started to wonder if yellow cake was a cultural touchstone in the Black community, or if I was alone in my affection.

The origins of yellow cake date back to the 19th century. It is widely thought to be a close relative of pound cake. "Yellow" refers to the color of the butter and whole eggs that are included in the recipe, and it is a popular cake mix found in most grocery stores today. The arrival of cake mixes in the 1930s was due to a surplus of molasses, but sales really began to rise after World War II, when flour companies broke in to the cake mix market. With the advent of frosting in a tub in the 1950s, yellow cake mixes became a staple in many American homes.

So where does this connection to yellow cake for so many Black people come from? I created an informal Twitter poll, and more than 300 people responded with their special memories and photographs of their family members. The common thread that ran throughout almost everyone's response was that it reminded them of their grandmothers, mothers, and aunts, and even years later, the thought of yellow cake meant so much to them. The cakes were almost always two layers, and were also used as the base recipe for other confections, such as pineapple upside-down cake, coconut cake, and rum cake. There were also variations on ingredients — sour cream, extra butter and/or eggs, and vanilla pudding were popular additions to make sure the cake was as moist as possible. One person mentioned her mother baking a yellow cake every Saturday and remembering everyone waiting to lick the mixer beaters, and another woman commented that she still uses the same hand mixer her mother used. Another person tweeted that she asked her grandmother to write the recipe down for her before she passed, and it is now a priceless family heirloom, of sorts. It was heartwarming to read that the recipes are now being passed down from generation to generation.

It doesn't matter if it's from a box or from scratch; yellow cake evokes memories of comfort, joy, and family, and it is a powerful way to feel connected to people we care about, whether they are with us or not. Perhaps most importantly, yellow cake also represents perseverance and the determination of the human spirit. Black people have encountered so much pain just because of the color of our skin in this country, and yet by the simple act of baking a cake, we were able to instill a feeling of normalcy in our loved ones, if only for a moment. These are the small, everyday moments that seem to reside in our collective memories, and if there were a flavor profile for "home," it would be yellow cake.

Therese Nelson, author and food historian, believes there's something about the simplicity of yellow cake that has allowed it to endure throughout the years. "That smell of good vanilla, the delicate yellow indicating good eggs, and the tender, fluffy crumb is the perfect Black canvas. And no matter how you dress it up or strip it down, yellow cake is the center of the sensed memory approval matrix of Black desserts," Nelson said.

My great-grandmother passed away when I was a little girl, but there are two things I clearly remember some 40 years later: Her hands, weathered and calloused from years of washing clothes and cleaning for white households, and the smell of yellow cake baking in the kitchen. She made the cake from scratch and preferred to eat it still warm, without frosting. Now whenever I smell yellow cake, I'm immediately transported back to her home, and for a split second, I feel like a child again.

When my daughter comes home from college for winter break, I'll make sure to have a yellow cake waiting for her. And I'll have a warm slice, without frosting, in remembrance of all the women in my family who came before.