The absolute best way to cook shrimp, according to so many tests 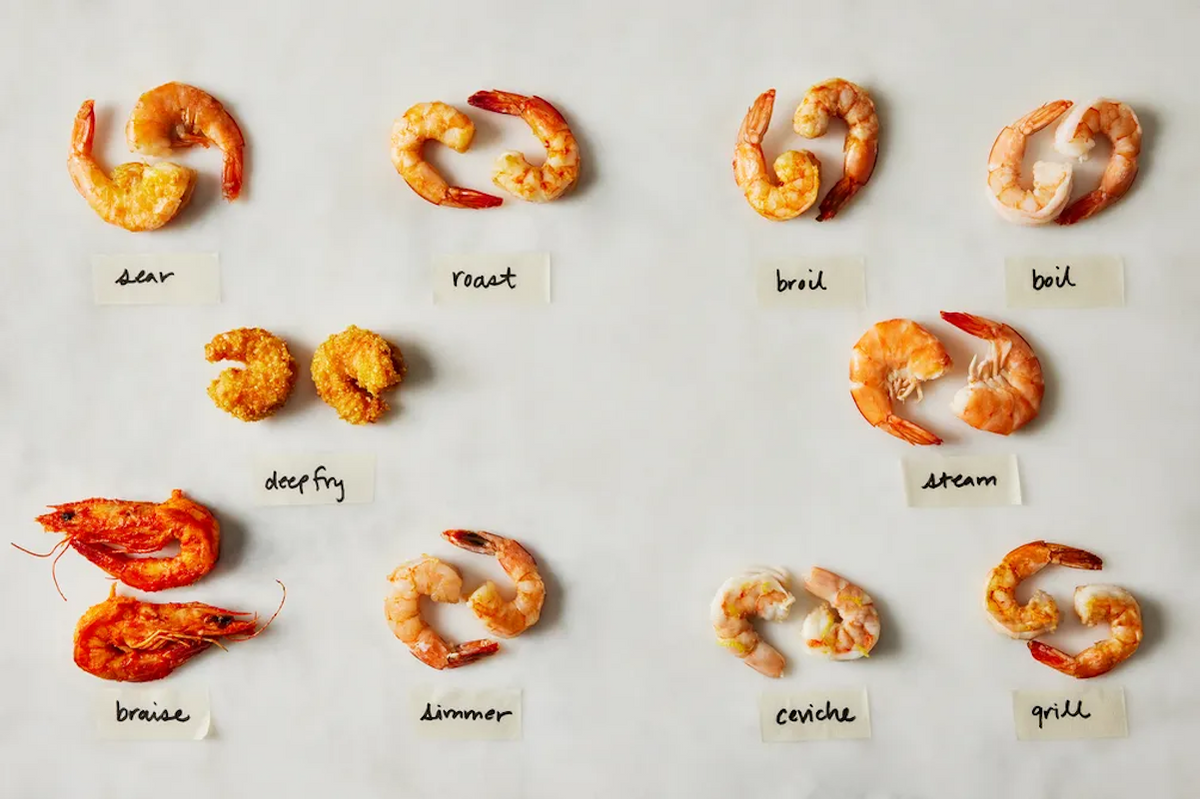 In Absolute Best Tests, our writer Ella Quittner destroys the sanctity of her home kitchen in the name of the truth. She's seared more porterhouse steaks than she cares to recall, tasted enough types of bacon to concern a cardiologist, and ranked potatoes from "most forgettable" to "potatoes we'd like to marry." Today, she tackles shrimp.

Humankind's first known shellfish feast occurred sometime around 163,000 B.C., in a cave on the southern coast of South Africa. Many millennia later, excavators found a bowl of roughly two dozen edible creatures, including mussels and at least one barnacle that had previously resided on the belly of a whale.

Humankind's most bizarre known shellfish feast occurred sometime around 7 a.m. last Tuesday in my apartment. It consisted of just me, a whole pound of butter, and more shrimp than would comfortably fit in my crisper drawer. I emerged several hours later, grease-battered, weary, and surprised by several of my findings. It was, in other words, an average Absolute Best Tests trial day.

I stripped out as much accoutrement and seasoning from the recipes as I could, but left basics like oil, butter, lemon, salt, red pepper flakes, cayenne, and garlic. I used differently sized shrimp — sometimes with the shell or head still affixed, sometimes peeled — depending on what best suited the method. My salt of choice is Diamond Crystal.

A quick note on shrimp versus prawn terminology: In her book "What's the Difference?," Brette Warshaw explains, "Anyone who tries to tell you that shrimp and prawns taste different is wrong." That said, Warshaw details the differences between the two shellfish, noting that, "Both shrimp and prawns are decapods, which mean they have external skeletons and ten legs. Prawns live in fresh water, while shrimp can come from either fresh water or salt water. Generally speaking, prawns are larger than shrimp — though this depends on the species." All of the methods below can be used with either prawns or shrimp.

I tested this method with both shell-on and peeled shrimp. The latter was fine, with shrimp that were less tender than some of the slower-cook methods like roast. But the shell-on test produced buttery, juicy shrimp that stole the show (the show being me, barefoot, eating shrimp in the morning). I suspect that the extra layer kept the shrimp from drying out as quickly when cooked over high heat. The shell also trapped the lemon, fat, and seasoning, which lent the meat more hearty, deeper-seated flavor than the peeled batch.

Roasting the shrimp for 8-ish minutes at a consistent temperature — instead of blasting them with high heat in a pan — produced meat that was sweeter and softer than the sear batch. The real standout, though, was the garlic, which began to caramelize into sticky, savory bits on each individual shrimp. I ate a whole half-batch myself before 8 a.m. Over rice, with a drizzle of soy and tart vinegar, they could overthrow any other entrée.

Pros: So, so, so good.
Cons: Took twice as long as the sear and broil methods.

The breaded and fried shrimp were an unqualified success. The breading was crispy and gently sweet, and provided a spicy swaddle for super-succulent meat. This method would work for any size shrimp, which I feel compelled to mention in case you'd like to invite me over and feed me a vat of popcorn bay shrimp!

Pros: Flavorful, crispy, ideal.
Cons: More steps than some of the simpler methods, but what else do you have to do??? Everything about this braise method was delightful. I drank some of the sauce straight from my blender and shouted "holy hell!" into the void (my empty apartment). The resulting shrimp was deeply flavored. The original recipe calls for peeled shrimp (with the head still on), but after trying it both ways, I found the shell-on, head-on shrimp retained much more flavor and moisture.

Pros: An entire dish as is, and a killer one at that. Are people still saying killer? My only friends are shrimp.
Cons: If, like me, you cook in a New York City kitchen, you have to do the horrible dance of taking out your blender or food processor.

The scampied shrimp were the most tender of the stovetop batches (sear, boil), with the exception of the braise. Each bite proffered so much buttery, acidic broth, I began to forget what I was tasting for, and instead started pawing blindly around my kitchen for a hunk of crusty bread until my hand landed on a hot kettle and I had to call it quits. Is that a good thing, or a bad thing? It's scampi!

The broil method produced somewhat clenched shrimp. They were still delicious when hot from the oven, but as they cooled, became less appealing than the room-temp roast and sear batches. Because they cooked for so little time and didn't include the marinade step of the roast method, the broil shrimp were also less flavorful. The garlic paste was delicious and crispy, so I might use this method again in a time crunch (i.e., if I needed to pop shrimp in my mouth ASAP before running out the door), but if I had an extra 15 minutes, I'd opt to roast instead.

Adapted from Add a Pinch.

The boil method generated super tender, almost plush shrimp that appeared overcooked at first blush — they were curled into little Os, not loose Cs — but had excellent texture. They were a bit lacking on the flavor front, since I seasoned the water with just salt, but I imagine cooking them with other shellfish, corn, and seasonings would've produced something delightful. The trial with shell-on shrimp made for much juicier meat than the peeled.

Pros: Shrimp pillows!
Cons: On the plain side.

Adapted from The Suburban Soapbox.

The steam method produced extremely moist, surprisingly flavorful shrimp. The vinegar in the water wasn't blatantly discernable, but its presence, along with the lemon, gave the meat a distinct freshness. These shrimp would be excellent chopped up and tossed with mayonnaise and fresh herbs, then piled onto buttered bread. I love acid-cured seafood more than most. That said, it wasn't my favorite method for cooking shrimp, which take longer than a soft-fleshed white fish to "cook" all the way through, and already have so much flavor on their own that they don't need as much boost from citrus as something milder might.

Pros: Delicious on a saltine or tortilla chip; a method that requires no heat source.
Cons: Takes hours!

Adapted from All Recipes.

Grilling lends any protein a smoky flavor, and shrimp is no exception. I tested with both shell-on and peeled, and the former produced much juicier, tender shrimp. I found that grilling peeled shrimp led to drier specimens, with less consistent interior texture.

Pros: A smokier flavor that would suit "surf and turf" better than the other methods.
Cons: Unless you use a grill basket, it's pretty easy to lose the little guys between the grates!