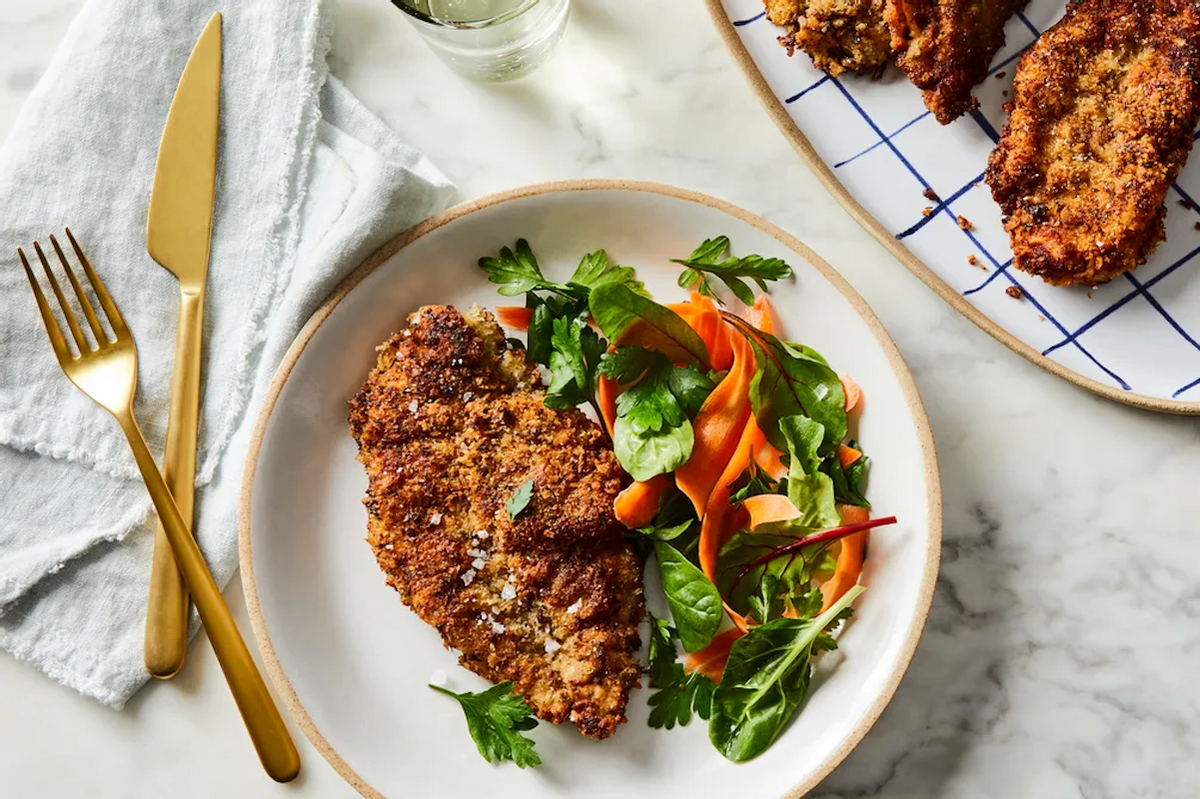 America has seen Pete Davidson every Saturday night on "Saturday Night Live" for the last seven years. More recently, we've seen him on the cover of tabloid magazines alongside Kim Kardashian and as the frequent subject of trending Twitter threads. I've personally dreamed of seeing Pete next to me on the sidewalk, holding my hand, making jokes about his lack of sleep, presidential elections, and his numerous high-profile relationships. The one place I never expected to find Pete was on Ruth Roger's podcast "River Cafe Table," where he joined the esteemed London-based chef to talk about everything from his special method for making Cup O' Noodles and scrambled eggs to his mom's homemade chicken cutlets. Once I saw that this very podcast episode did exist, I said to my real-life partner, "There's no way Pete can cook . . . is there?"

"No way," my partner replied. "He probably orders a ton of Postmates and I'm sure all of it hurts his stomach," he said. Pete has spoken openly about living with Crohn's Disease, a type of inflammatory bowel disease. It seemed likely that he had a limited list of foods he could eat without experiencing severe physical discomfort for hours after.

Pete grew up on Staten Island, which is known for its two-mile stretch that kicks off the New York City Marathon and its exhaustive list of Italian-American restaurants — the kind that serves you big loaves of thickly sliced white bread, maybe with olive oil, but more likely with continental butter chips. I assumed that he frequently dined at a number of old-school red sauce joints, but thought that there was no way he was proficient at rolling meatballs or making chicken parmesan.

And I was right. Pete Davidson has absolutely no idea how to cook.

"I put them in the pan and mush them around," he said, describing his technique for making scrambled eggs.

"I can also add hot water to ramen noodles," he said. But Pete, ever the comedian, shared his method with complete seriousness: "I don't know how to boil water because I'm dumb so I go to the Keurig and hit the hot water button." He lets the hot water flow from the Keurig onto the pre-made ramen noodles, which he purchases from Costco, and enjoys them from, I imagine, a humble but spacious balcony that overlooks the tip of Manhattan.

For the record, this was a teaching moment for both the host and guest. Rogers admitted that she had never heard of Cup O' Noodles and wouldn't have the faintest idea how to cook them. Nor was she familiar with the Keurig (though she did understand the comparison to its bougier relative, the Nespresso).

Pete's cooking literacy isn't so unusual. It's along the lines of a student living alone in a college dorm room or apartment for the first time in their life; and this is, in some ways, Pete's reality, as he just moved out of his mom's basement during the pandemic (yet another common subject matter that he speaks about with a mixture of pride and self-mockery on "SNL").

But he also appreciates thoughtful home cooking. For most of his life, his mother worked as an ER nurse, which meant irregular hours and lots of takeout for Pete and his sister. The one dish that she perfected, according to Pete, was chicken cutlets. "I have yet to have a better chicken cutlet anywhere else," he told Rogers.

With a little coaxing, Rogers helped Pete walk listeners through his mom's process for making chicken cutlets, which is most notable for its double coating of panko breadcrumbs. "I never really ate at the dinner table. I would walk by and take each chicken cutlet as soon as it was done being made . . . It was always a treat when my mom cooked," he said.

Like most families, holidays became the epicenter of home cooking for the Davidsons. Thanksgiving was potluck-style: "My grandma would do the turkey and the stuffing, my mom would bring the sweet potatoes, someone else would bring mashed potatoes, asparagus, [and] dinner rolls." Pete likely contributed his comedic timing anytime the dinner conversation inevitably, got a little awkward, and hopefully helped clean up the table with the skills he acquired working as a busboy at Nucci's South, one of the aforementioned old-school red sauce Italian joints on Staten Island.

Despite Pete's rise to fame, he comes across as relatable. He grew up in a working-class family in New York's forgotten borough and continues to maintain a good relationship with his mom and sister. Chicken cutlets are an apt metaphor for Pete Davidson; they are both dependable and familiar. They are delightful dinner party company (I know this to be true of chicken cutlets and expect the same from Pete). Everyone loves them, even when they look a little too fried.