Robert Reich has the perfect answer to Trumpism 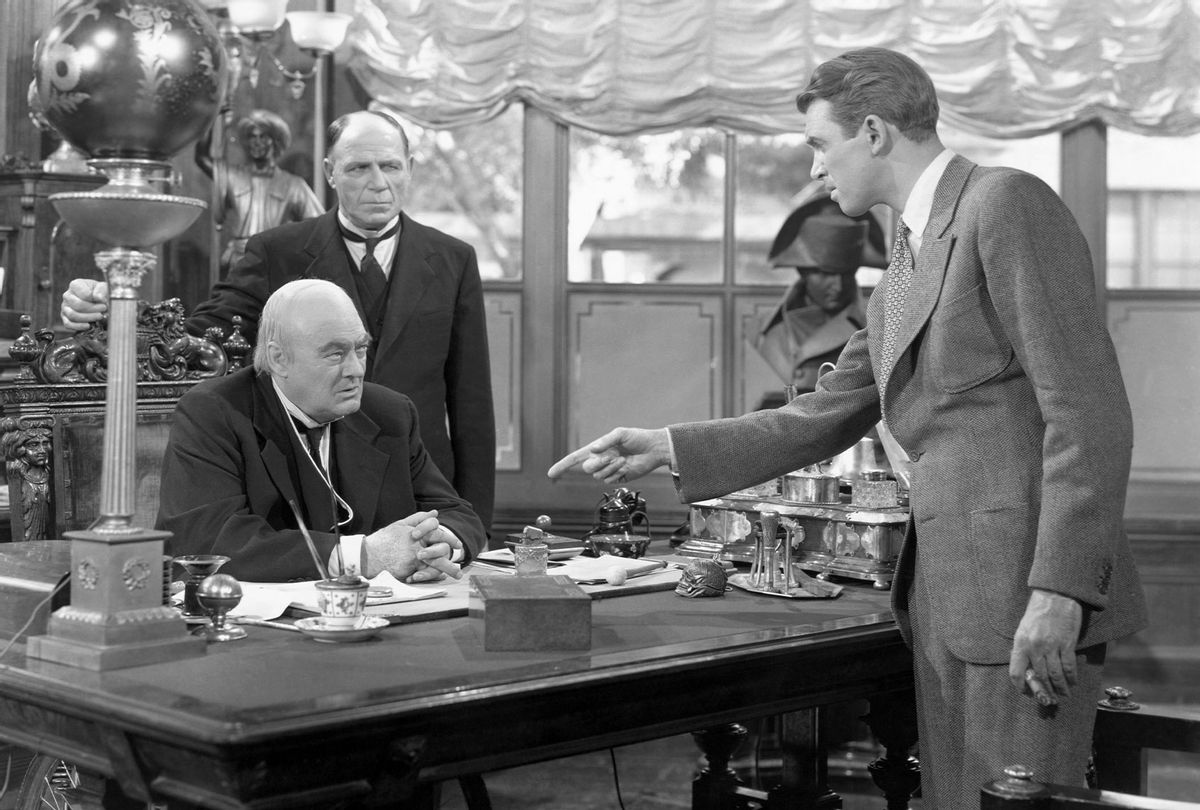 James Stewart, as George Bailey, points at Lionel Barrymore in a scene from "It's a Wonderful Life" (Getty Images/Bettman)
--

As I've considered the real lesson of January 6, I've been prompted to rewatch a movie that provides a hint of an answer — Frank Capra's "It's a Wonderful Life," which was released 75 years ago this month.

When I first saw the movie in the late 1960s, I thought it pure hokum. America was coming apart over Vietnam and the assassinations of Martin Luther King, Jr. and Robert F. Kennedy, and I remember thinking the movie could have been produced by some propaganda bureau of the government that had been told to create a white-washed (and white) version of the United States.

But in more recent years I've come around. As America has moved closer to being an oligarchy — with staggering inequalities of income, wealth, and power not seen in over a century — and closer to Trumpian neofascism (the two moves are connected), "It's a Wonderful Life" speaks to what's gone wrong and what must be done to make it right.

As you probably know (and if you don't, this weekend would be a good time to watch it), the movie's central conflict is between Mr. Potter (played by Lionel Barrymore) and George Bailey (Jimmy Stewart). Potter is a greedy and cruel banker. George is the generous and honorable head of Bedford Fall's building-and-loan — the one entity standing in the way of Potter's total domination of the town. When George accidentally loses some deposits that fall into the hands of Potter, Potter sees an opportunity to ruin George. This brings George to the bridge where he contemplates suicide, thinking his life has been worthless — before a guardian angel's counsel turns him homeward.

It's two radically opposed versions of America. In Potter's social-Darwinist view, people compete with one another for resources. Those who succeed deserve to win because they've outrun everyone else in that competitive race. After the death of George's father, who founded the building-and-loan, Potter moves to dissolve it — claiming George's father "was not a businessman. He was a man of high ideals, so-called, but ideals without common sense can ruin a town." For Potter, common sense is not coddling the "discontented rabble."

In George's view, Bedford Falls is a community whose members help each other. He tells Potter that the so-called "rabble … do most of the working and paying and living and dying in this community." His father helped them build homes on credit so they could afford a decent life. "People were human beings to him," George tells Potter, "but to you, they're cattle."

When George contemplates ending it all, his guardian angel shows him how bleak Bedford Falls would be had George never lived — poor, fearful, and dependent on Potter. The movie ends when everyone George has helped (virtually the entire town) pitch in to bail out George and his building-and-loan.

It's a cartoon, of course — but a cartoon that's fast becoming a reality in America. Do we join together or let the Potters of America own and run everything?

Soon after "It's a Wonderful Life" was released, the FBI considered it evidence of Communist Party infiltration of the film industry. The FBI's Los Angeles field office — using a report by an ad-hoc group that included Fountainhead writer and future Trump pin-up girl Ayn Rand — warned that the movie represented "rather obvious attempts to discredit bankers by casting Lionel Barrymore as a 'scrooge-type' so that he would be the most hated man in the picture." The movie "deliberately maligned the upper class, attempting to show the people who had money were mean and despicable characters. This … is a common trick used by Communists."

The FBI report compared "It's a Wonderful Life" to a Soviet film, and alleged that Frank Capra was "associated with left-wing groups" and that screenwriters Frances Goodrich and Albert Hackett were "very close to known Communists."

RELATED: The harmful messaging of "It's a Wonderful Life"

This was all rubbish, of course — and a prelude to the Red Scare led by Republican Senator Joe McCarthy of Wisconsin, who launched a series of highly publicized probes into alleged Communist penetration of Hollywood, the State Department, and even the US Army.

The movie was also prelude to modern Republican ideology. Since Ronald Reagan, Republicans have used Potter-like social Darwinism to justify everything tax cuts for the wealthy, union-busting, and cutbacks in social safety nets. Rand herself became a hero to many in the Trump administration.

Above all, Reagan Republicans, CEOs, and Trumpers have used the strategy of "divide-and-conquer" to generate division among Americans (a kind of political social-Darwinism). That way, Americans stay angry and suspicious of one another, and don't look upward to see where all the money and power have gone. And won't join together to claim it back.

What would Republicans say about "It's a Wonderful Life" if it were released today? They'd probably call it socialist rather than communist, but it would make them squirm all the same — especially given the eery similarity between Lionel Barrymore's Mr. Potter and you know who.