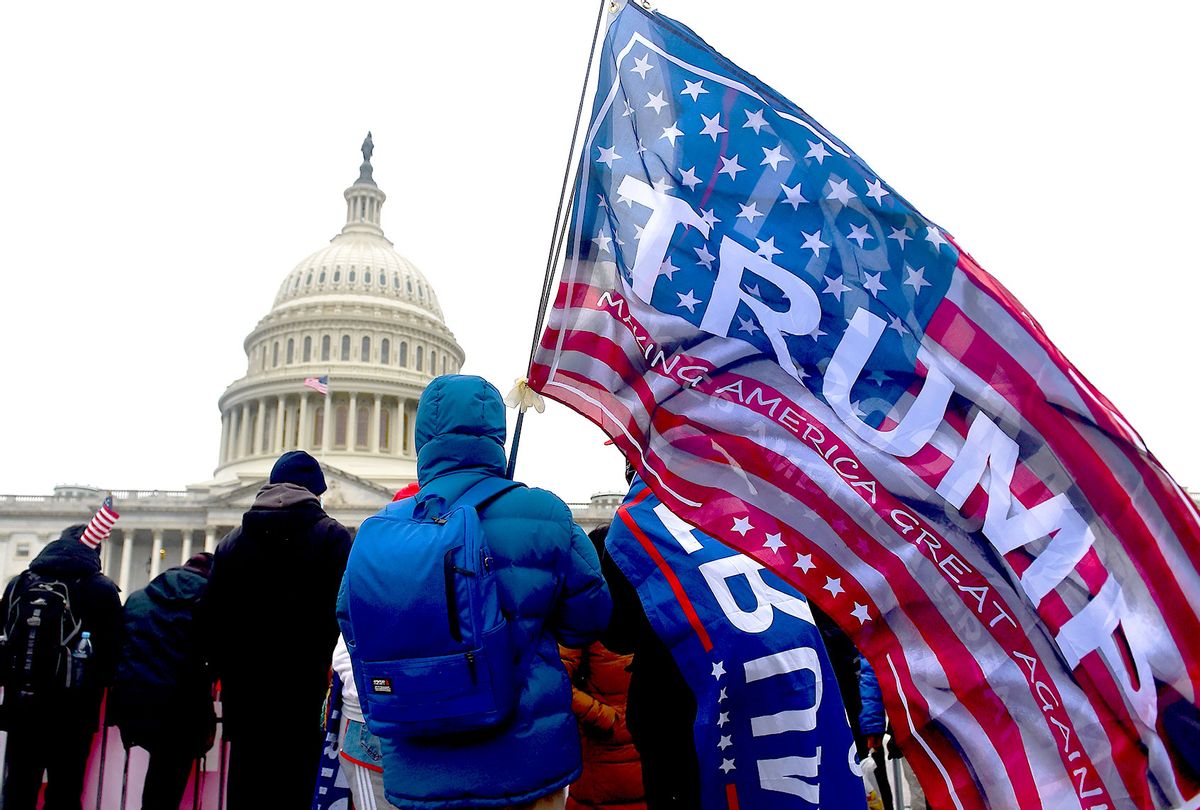 Of the 725 people arrested so far for the January 6 insurrection incited by Donald Trump, perhaps one of the most telling stories is that of the very first person sentenced, Anna Morgan-Lloyd. On Facebook, Morgan-Lloyd's attitude about participating in a violent attempt to overthrow democracy was jubilant, declaring it the "best day ever." But, when faced with the possibility of prison time, she masterfully escaped punishment by pretending to be reformed. After talking up all of the studying she did in jail about the importance of democracy and evils of fascism — she even claimed to have watched "Schindler's List" — Morgan-Lloyd turned on the waterworks.

Morgan-Lloyd, continuing to cry: "I would just like to apologize to the court, the American people, my family. I went there to support and show support for President Trump, and I'm ashamed that it became a savage display of violence that day."

The act worked. Morgan-Lloyd was let off with a slap on the wrist, getting probation with no prison time. The judge seemed to sincerely believe her tale of being fooled into fascism and finding redemption through the magic of learning. This is why he was furious later to learn that Morgan-Lloyd's gut-wrenching show of remorse was all nonsense. Indeed, it was only a day after she was handed her light sentence that Morgan-Lloyd was telling lies on Fox News, saying "we see nobody damage anything" and the rioters were "actually very polite."

RELATED: It's time for Democrats to remind Republicans: The GOP is very much in the minority

In reality, the rioters did $1.5 million in damages, injured nearly 140 officers, and were so out of control that five people died on the scene. Many of the officers who defended the Capitol from the violent mob are still paying the price one year later. Six months after the insurrection, 17 were still on leave due to injuries. Four have committed suicide in the past year. As officer Michael Fanone testified about that day, "I'm sure I was screaming, but I don't think I could even hear my own voice."

So was Morgan-Lloyd just delusional? Did she not have eyes in her head? Was she unable to see the violence plainly visible in the overwhelming amount of video and photographic evidence of the day? No, of course not. As the judge who sentenced her later noted when issuing a harsher sentence to another rioter, hopes that her contrition was real were quickly "dashed."

The lesson here is clear and should remain clear: Fascists lie. That is the nature of the authoritarian ideology, which doesn't value good faith discourse in a democracy. Indeed, they spit on democracy, or, as rioters in the Capitol reportedly did, they shit on it. All that the fascist respects is power and domination. Lying, if anything, is valorized in the authoritarian ideology because lying is an expression of power. To lie to someone else — a judge, a journalist, randos on social media — is a display of dominance over them and contempt for their petty attachment to Enlightenment values.

That bad faith is the lingua franca of fascism is not a new observation. Jean-Paul Sartre famously noted that fascists see lying as a delicious troll "for it is their adversary who is obliged to use words responsibly, since he believes in words." All of which is why it's important not to take it at face value when Republicans claim to "believe" various lies around Trump's attempted coup, from the claim that the election was "stolen" to the justifications rolled out for the rioters' behavior that day. None of it.

RELATED: Do GOP voters actually believe Trump's Big Lie about "rigged" elections? They don't act like they do

Unfortunately, the word "believe" still gets attached to the various nonsense Republican voters spout about the attempted coup. "Republicans who watch Fox News are more likely to believe false theories about Jan. 6," blared a Washington Post headline on a Monday morning analysis of new polling about what Americans say about the insurrection. "What makes someone think that the 2020 election was stolen?" writes Philip Bump in the opening paragraph.

It's important to note, however, that there's good reason to believe that Republicans do not actually believe the election was stolen. Nor should one assume they are legitimately deluded when they tell pollsters lies like "Trump didn't incite it" or "it was antifa" or "the protesters were peaceful" or "the attack was justified". As Heather "Digby" Parton noted Monday, "78% of Republicans now believe that Trump bears only a little or no responsibility for the attack, which is contradictory since they also profess to believe that the mob was protecting democracy."

These contradictions between professed beliefs reflect the contradictory lies that are flowing from Fox News. Tucker Carlson, the most adamant rewriter of the coup's history, switches seamlessly between denying that the riot was an insurrection, claiming that the insurrection was a "false flag" orchestrated by the FBI and antifa, and claiming that the insurrectionists were justified. That each of these claims contradicts the other is of no matter because Carlson believes none of it, and neither do his viewers. They are engaged in a collective act of dissembling and gaslighting, deliberately filling the discourse with noise so they never have to actually defend what their true beliefs about the insurrection actually are.

So what is that true belief? Hard to say exactly under all that noise, but the likeliest one is that democracy is a threat to white supremacy, therefore democracy must be ended. This deeper, more unspeakable belief peeks out occasionally. We see it when Carlson claims that opposition to Trump's attempted coup and the insurrection is an attack on "legacy Americans," his latest clunky euphemism for the conservative white people he believes should be treated as the only legitimate Americans.

As Media Matters documented at the end of December, Fox News, and Carlson especially, spent the bulk of 2021 hyping the neo-Nazi "great replacement" theory. The theory starts from the assumption that white conservatives are entitled to be the dominant class in the U.S. From there, demographic changes are recast as a giant conspiracy against white people. The neo-Nazis explicitly say Jews are conspiring to "replace" white Christians with people of color that they supposedly can control. The Fox News crew euphemizes that by saying it's the "elites" or the "globalists." Either way, the same conspiracy theory bounces around the right-wing media ecosphere and creates a permission structure for conservative whites to treat racial diversity as an act of deliberate aggression. It's used to justify their embrace of fascism and violence as an act of self-defense. It's the same game Nazis played by accusing Jews of secret conspiracies — and it's for the same general purpose.

That's why it's so critical to abandon the hope that Republicans are merely delusional when they parrot the Big Lie. As the judge who sentenced Anna Morgan-Lloyd learned to his regret, authoritarians will say whatever they feel they need to in order to evade accountability, whether consequences come in the form of a prison sentence or merely having someone point out that they are racist. Fascists lie, especially to pollsters, who are viewed as part of the "elite" class of pro-democracy forces they are trying to destroy. Seeing them for who they are is the first step of fighting back effectively.