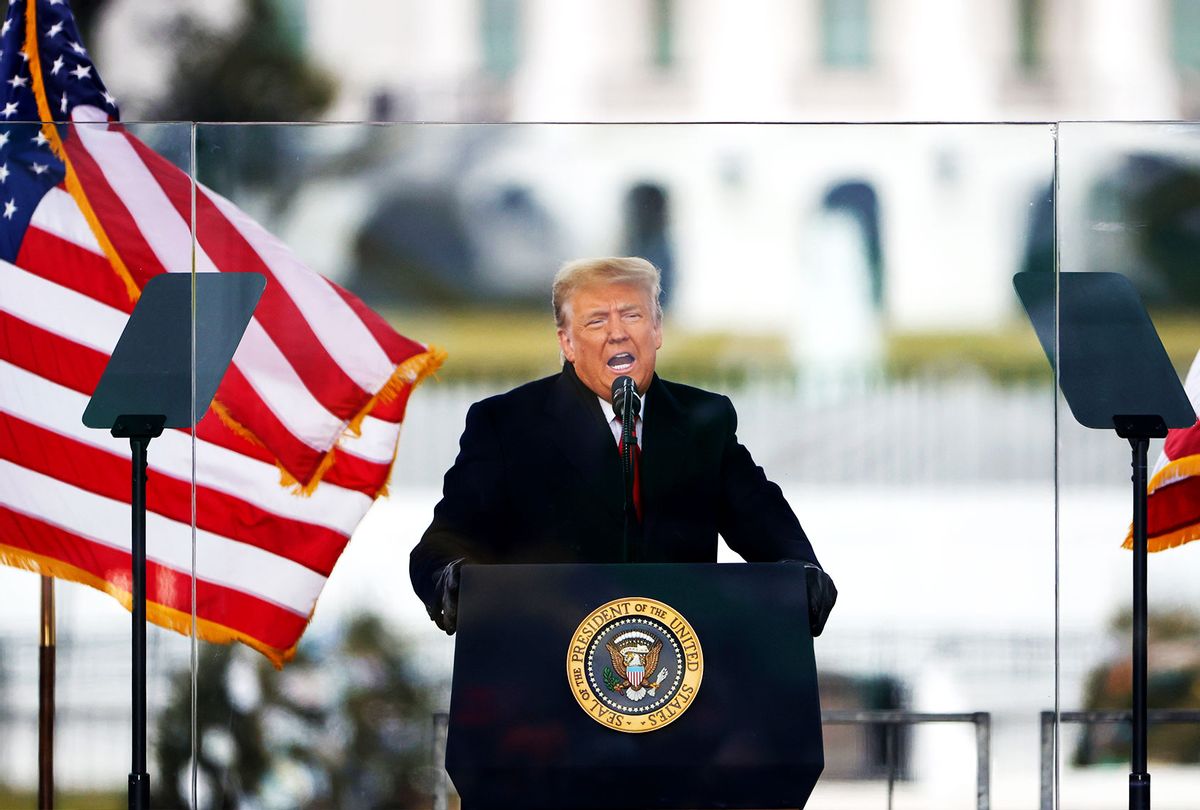 In the lead-up to the first anniversary of the January 6 attack on the U.S. Capitol later this week, media watchdogs are warning news networks and journalists against uncritical live coverage of Donald Trump's planned press conference and the lies the disgraced former president is expected to spew.

"It is critical that news networks do the right thing—refuse to carry it live, so they do not uncritically promote the lies and disinformation that is generated from Trump's speech in real time."

"Donald Trump's January 6 press event should be recognized for what it is: an opportunity for Trump to lie to downplay the violent insurrection at the U.S. Capitol and set up his 2024 presidential campaign," said Angelo Carusone, president of watchdog Media Matters for America, in a Monday statement.

He stressed that "it is critical that news networks do the right thing—refuse to carry it live, so they do not uncritically promote the lies and disinformation that is generated from Trump's speech in real time."

"Trump has a well-established pattern of lying every time he opens his mouth," Carusone noted. "He has also had ample opportunities to weigh in on the insurrection—including when Fox hosts begged Trump to take action in real time to stop the riot. To give Trump a platform to spread lies and misinformation on this tragic anniversary would be to repeat the very mistakes that helped foment the violent insurrection at the U.S. Capitol in the first place."

In a Sunday tweet, Rosen urged against carrying Trump's speech live or amplifying the former president's go-to lies that have been debunked.

Asked by a Twitter user why journalists and news outlets struggle with practices that seem "so simple and so obvious," Rosen responded: "Because the practice on view here—newsworthiness—is an incoherent grab bag of factors that doesn't take into account the damage a demagogue can do to the public sphere, or the truth value of an event. And because this particular speaker can be 'good' at lurid spectacle."

Some networks and journalists called out Trump's lies while he served as president. CNN reporter Daniel Dale used to be at the Toronto Star, "where he was the first journalist to fact-check every false statement" from Trump—who tends to push back against any critical coverage with the term "fake news."

Two days after the 2020 presidential election, before the race was widely called for President Joe Biden, multiple major U.S. networks cut away from a live speech in which Trump made several false claims, including that he had won reelection—lies that were repeated by his allies in Congress and beyond.

Trump also circulated his lies about the security and outcome of the election during a speech at a January 6 rally that occurred as Congress was in the process of certifying Biden's win—and dozens of Republicans were baselessly contesting the results.

Trump did not join his supporters in storming the Capitol, but lawmakers accused him of inciting the violence and his speech ultimately led to his historic second impeachment.

Despite his loss and two impeachments—along with facing civil and criminal investigations—75-year-old Trump is widely expected to run for president again in 2024, and political observers have long warned that his Big Lie about 2020 was just the beginning.

In a December 21 statement, Trump not only continued to lie about the election results but also blasted the House panel investigating the deadly Capitol attack, slammed so-called "Republicans in name only" (RINOs), and promoted his upcoming event. He said in part:

Why isn't the Unselect Committee of highly partisan political hacks investigating the CAUSE of the January 6th protest, which was the rigged Presidential Election of 2020? ...I will be having a news conference on January 6th at Mar-a-Lago to discuss all of these points, and more. Until then, remember, the insurrection took place on November 3rd, it was the completely unarmed protest of the rigged election that took place on January 6th.

As Newsweek reports, Trump's plan to host a press conference on Thursday has even been criticized by Republicans, including a former White House aide from his administration.

Trump's event is scheduled for 5:00 pm—a half-hour before a congressional prayer vigil at the U.S. Capitol is set to start, meaning the ex-president is expected to provide, in the words of Politico's David Siders, "a vivid split-screen moment."

The January 6 anniversary comes amid rising concern about the state of U.S. democracy as well as outrage over failures by congressional Democrats and the Biden administration to take real action to protect it.

The results of an NPR/Ipsos poll released Monday show that a majority of Democrats, Independents, and Republicans believe that U.S. democracy—and the nation—are "in crisis and at risk of failing."

While voters across the political spectrum are worried, the new survey found that unlike Democrats and Independents, less than half of Republicans accept the results of the 2020 presidential election, even though Trump's own officials attested to its security.