"I am so pissed off that we have to continuously fight for the basic necessities," the union's president said 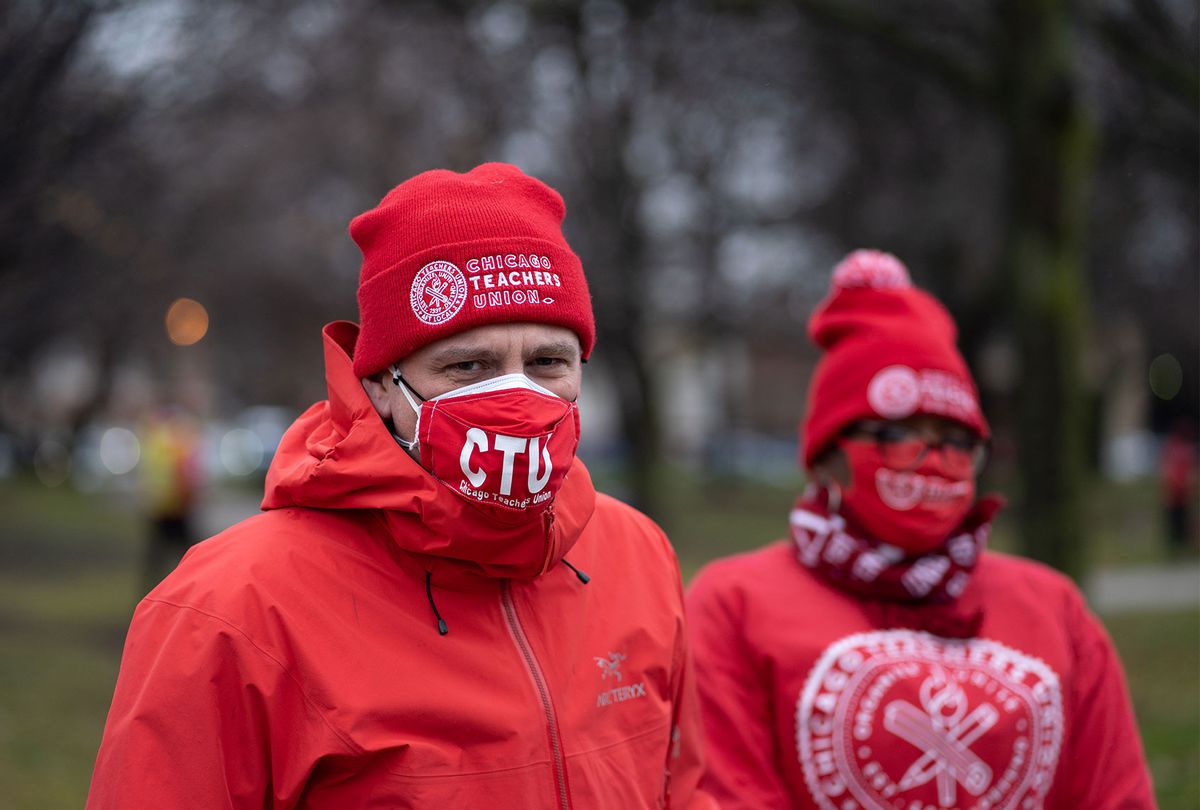 Chicago Teachers Union President Jesse Sharkey speaks ahead of a car caravan where teachers and supporters gathered to demand a safe and equitable return to in-person learning during the COVID-19 pandemic in Chicago, IL on December 12, 2020. Select Chicago public schools teachers are expected to return to classrooms on January 4th, 2021. (Photo by Max Herman/NurPhoto via Getty Images (Max Herman/NurPhoto via Getty Images)
--

Right-wing pundits have been in a frenzy since the Chicago Public School (CPS) system canceled all classes on Wednesday after the Chicago Teachers Union (CTU) voted to suspend in-person instruction, instead opting for remote learning amid the recent upsurge in coronavirus cases throughout the country.

The move, which applies to 360,000 students and staffers throughout the city, was largely driven by fears around COVID-19 safety. On Tuesday evening, the teachers union held an emergency meeting to address the district's apparent failure to accommodate for COVID-19 concerns, prompting an official delegate vote. Roughly 73% of the union's 25,000 members supported a return to remote learning.

The union has said that the in-person learning will resume when COVID cases subside or when it can agree upon conditions for in-person schooling with Mayor Lori Lightfoot, according to CNN.

"Educators of this city want to be in buildings with their students. We believe that classrooms are where our children should be," the union said. "But as the results tonight show, Mayor Lightfoot and her CPS team have yet to provide safety for the overwhelming majority of schools."

Lightfoot, for her part, has ardently opposed the union's vote, saying during a Tuesday presser that "there's no public health reason to shut the entire system down."

"The worst thing we can do is to shut the entire system down," she added. "What we need to be focused on is working together. What I'd love to see CTU do is not force an illegal work stoppage. What I'd love to see them do is work hand-in-glove with us to get kids and their families vaccinated."

However, CTU argues that CPS has exhibited a longstanding pattern of neglecting concerns staffers' COVID fears, namely by failing to provide adequate testing and improved masking.

"I am so pissed off that we have to continuously fight for the basic necessities," Stacy Davis Gates, the union's vice president, told NBC Chicago.

RELATED: The US broke its single-day case record for omicron — but not all regions are affected equally

"The teachers are being put in the unfortunate situation where we're trying to keep people safe. We're trying to run school, and we're not being given the tools to do it," CTU President Jesse Sharkey echoed.

According to The Chicago Tribune, the move comes on the heels of months of negotiations between CTU and CPS. Last week, CTU proposed the use of daily health questionnaires; universal PCR testing for students; KF94, KN95, or N95 mask provisions; and a mandatory transition to remote learning if over 20% of its staff were in isolation.

CPS, however, responded with slightly looser restrictions, suggesting that the transition threshold be set to staff absences of 40%.

Numerous public figures and writers came forward on Wednesday to criticize the union's vote, suggesting that more remote learning was "anti-student" and "anti-science."

"The Chicago Teachers Union should be ashamed of itself," said Rep. Mike Gallagher, R-Wisc., in a statement. "The simple fact is remote learning is a joke and does more harm than good for our children. But when it comes to keeping kids in the classroom, it seems the only people who don't understand this are the teachers unions."

"If Democrats ever end the filibuster, at first switch to GOP control – which looks to be 2024 – teachers' unions should be dissolved by federal statute within a month of the new Congress and president sitting, along w/ cancelation of the absurd benefits packages," echoed right-wing radio host Hugh Hewitt."

MSNBC host Joe Scarborough called the the CTU "ignorance when it comes to the science."

"If you don't want to teach, don't teach," he said during a Wednesday broadcast. "Quit. Just stay at home and stop teaching children, okay?"

COVID cases in Chicago are at or near record highs in Chicago, reported the The Chicago Sun Times. State data indicates the city is seeing a daily average of nearly 5,000 new cases, with a cumulative case count around 440,000.