In 2013, 29% of Americans said armed rebellion might be necessary to "protect" liberty — and journalists scoffed 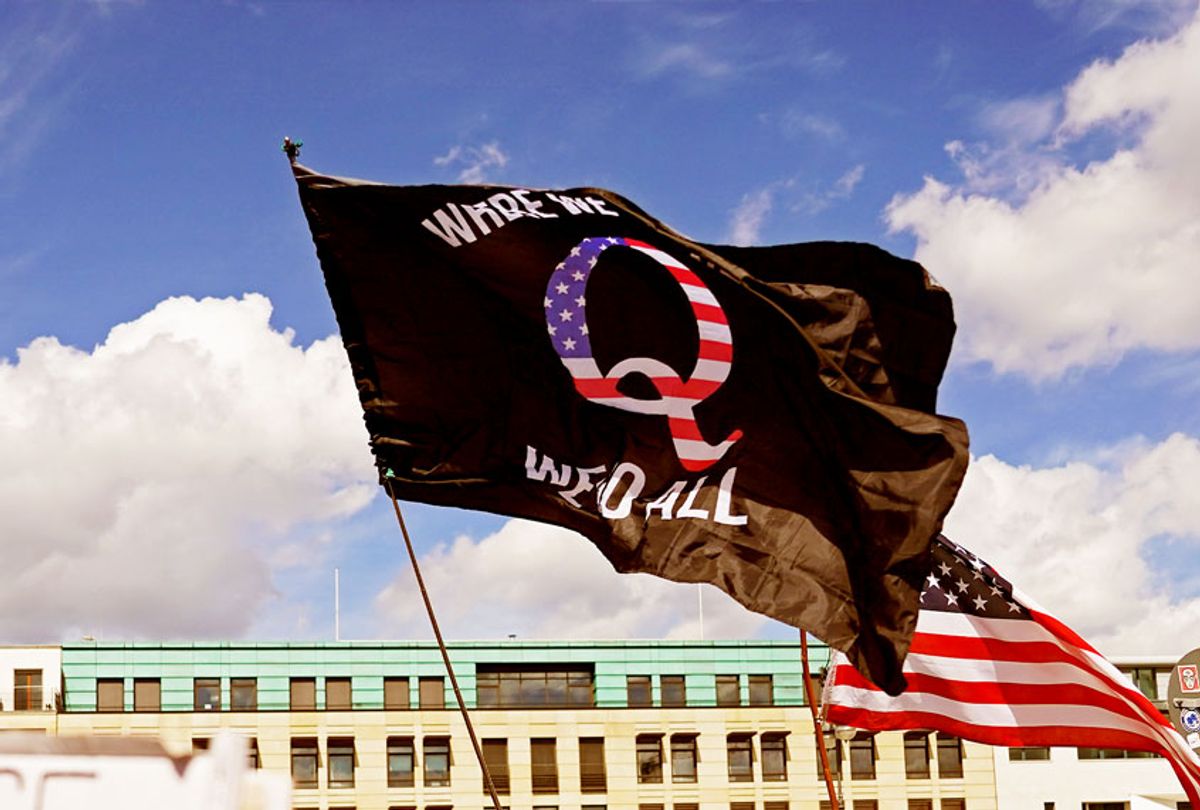 Americans had to confront a new reality when an angry mob attacked the U.S. Capitol on Jan. 6, 2021: Some of their fellow citizens were in the grips of a false reality and had resorted to violence to support it.

Conspiracy theories about the 2020 presidential election and the strange alternate universe of QAnon helped drive the attack, which has prompted concerns about further domestic upheaval.

In the year since, a flurry of studies and analyses have tried to gauge the American appetite for conspiracy theories and the likelihood of more violence — even civil war. As someone who has studied the conspiracy theories that followed the December 2012 mass shooting at Sandy Hook Elementary School, I keep revisiting a May 2013 poll about gun control that found widespread doubts about that shooting and shockingly high support for armed rebellion.

Almost eight years before the Capitol was attacked by partisans bent on reversing the results of an election, nearly one-third of Americans surveyed — and a whopping 44% of Republicans — said in a 2013 PublicMind poll by Fairleigh Dickinson University that armed rebellion might soon be necessary in the U.S. to protect liberties.

The finding was so disconcerting that the poll was dismissed by some prominent political observers as too unbelievable to be true. 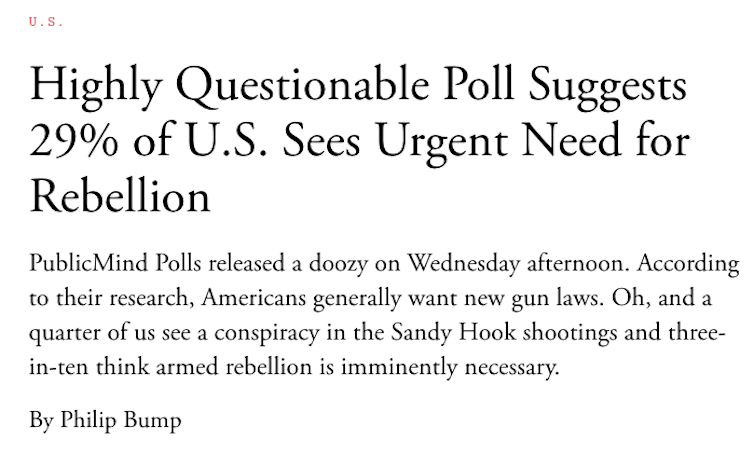 Philip Bump, in The Atlantic on May 1, 2013, called the poll 'a doozy of a survey.' Screenshot, The Atlantic.

I recently interviewed the political psychologist who designed the poll, as well as a journalist who blasted its conclusions and now writes about the fallout from the Jan. 6, 2021, insurrection.

Daniel Cassino, a professor of government and politics at Fairleigh Dickinson University and director of the FDU poll, said the 2013 survey sought to gauge the impact of motivated reasoning around gun policy. Motivated reasoning is the emotional bias that can influence judgment or cause someone to dismiss facts that don't align with their beliefs.

That's where conspiracy theories come in. If you oppose firearm restrictions, then the slaughter of 20 first-graders and six adults at an elementary school with an AR-15 is a real problem for you. Cassino explained: "It's easier for people who believe strongly in gun rights to say it didn't happen rather than change their minds" about guns.

One in four people surveyed in the 2013 poll said they believed the truth about the school shooting was being hidden to support a political agenda. Many others were unsure. People who opposed new gun control measures were more likely to have doubts about the shooting.

Cassino said the question about armed rebellion explored a belief that is normally attributed only to members of militias and extremist groups. The finding didn't necessarily indicate that regular people would pick up arms, but it did show this notion was becoming part of the Republican partisan identity, Cassino said.

"That is scary because once something becomes part of that belief structure, it becomes self-fulfilling," he said. The notion of a possible armed rebellion has since spread through the Republican Party and has been espoused by party leaders and elected officials.

"The actual armed insurrection that happened in January [2021] showed us this is a real strain in American politics that has gotten stronger and is not going away," Cassino said.

When the poll came out, some commentators used it to ridicule Republicans. Comedian Bill Maher, for example, tweeted about the study: "So … 44% of Rep.s think an ARMED REBELLION might be necessary in the next few years. So if u say most Rep.s r f–king nuts u'd be off by 7%."

Others dismissed the findings entirely. The Atlantic slammed the "doozy" of a poll as "highly questionable."

"The poll is at-best semi-scientific and should probably not be taken seriously," Philip Bump wrote. "It certainly should not be written about by other media outlets."

Today, Bump is a national correspondent at the Washington Post who specializes in the numbers behind politics and has written about the Jan. 6 insurrection.

In a recent phone call, he told me he thinks his reaction to the 2013 poll was "over the top." He still thinks Cassino's numbers seem high compared to some recent findings, but Bump said he would not dismiss the poll today like he did back then.

"It obviously takes on a much different light given the last eight years," he told me.

After the 2013 poll, Cassino said he was inundated with phone calls from people accusing him of being part of a conspiracy to take away guns. Many of the calls were made to his home number and were threatening. The calls, along with the negative media coverage, dissuaded him from asking about armed rebellion in future polls, he told me. Now he wishes he had collected that data.

Just after the 2021 insurrection, a Zogby Poll found that nearly half of Americans — 46% — thought another civil war was likely. The American Enterprise Institute found that four in 10 Republicans thought political violence might be necessary. A more recent survey published in November 2021 by the nonprofit Public Religion Research Institute found that nearly one-third of Republicans — 30% — agreed with the statement: "True American patriots may have to resort to violence in order to save our country."

Even the pragmatic folks at the nonpartisan Brookings Institution recently cautioned that the possibility of a second civil war should not be dismissed: "We should not assume it could not happen and ignore the ominous signs that conflict is spiraling out of control," Brookings fellows William G. Gale and Darrell M. West warned.

Opposition to vaccines in the face of a global pandemic, and obstinate belief in Trump's debunked claims about the 2020 presidential election, have shown journalists and the public just how much strongly-held beliefs can shape the perception of reality, Cassino said.

"People's beliefs about reality are infinitely malleable," he said. "I wish it wasn't the case, because it is really bad for society. I wish I had been wrong."

Read more on the power of conspiracy theory in post-Trump America: