The insurrection will be decentralized: The next Jan. 6 will happen in the state houses

Republicans have a more effective strategy than storming the Capitol: They plan to destroy democracy state by state 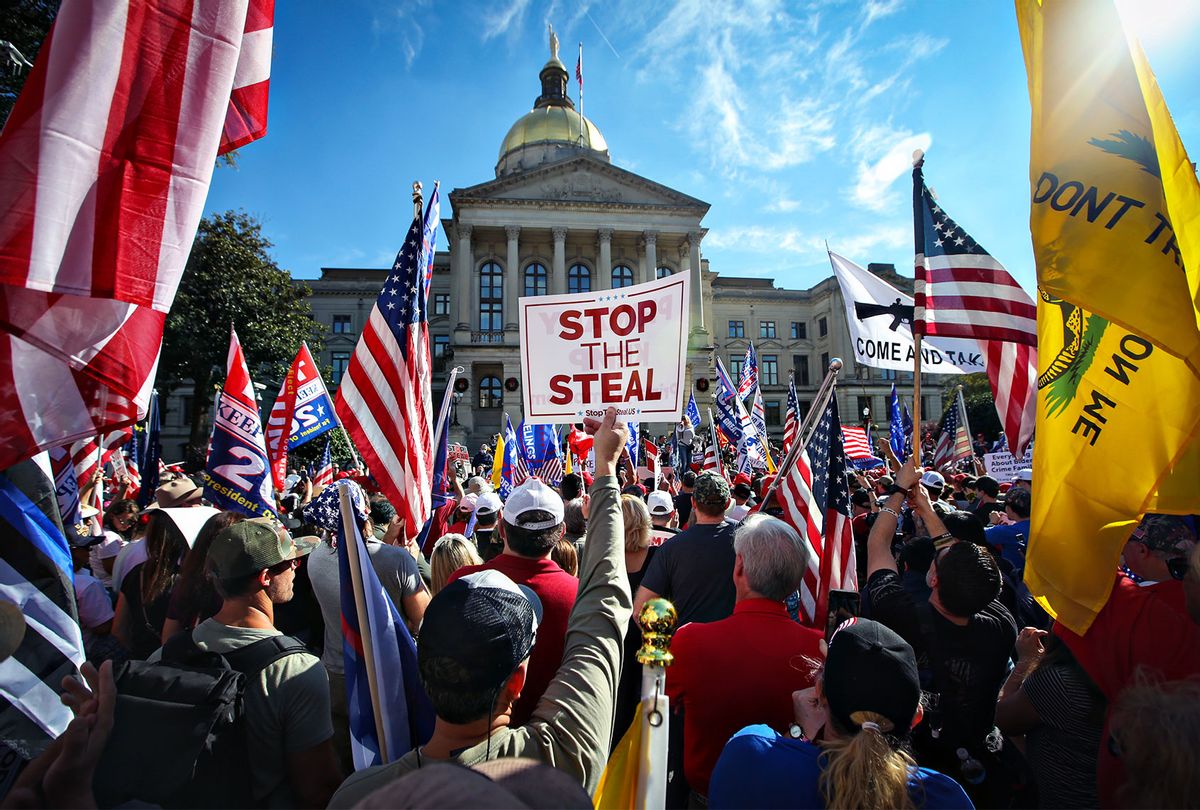 Hundreds of Trump supporters and gather near the Capitol Building for the Stop the Steal Rally in Atlanta, GA. as well as counter protesters in Atlanta, GA. (Jason Armond / Los Angeles Times via Getty Images)
--

A year ago, a stunned world watched rapt as pro-Trump insurrectionists smashed through windows and barricades at our nation's Capitol, disrupting the constitutionally mandated tally of Electoral College votes certifying President Biden's win. But that display of violence ought to have come as no surprise, as escalating threats and violence in our state houses throughout 2020 presaged the Capitol insurrection.

A year later, we must again look to our state houses for a preview of what is to come. In key battleground states, Republicans are steadily building toward a future where they can engineer election outcomes. GOP-controlled legislatures are setting the stage for another attempted coup. The next insurrection will be decentralized, coming from our state houses with the sheen of legal authority. If we do nothing to stop their plans, then as the 2024 votes are tallied in our states, the laws and rules governing the process and outcome will have been rewritten for a particular outcome: Republican wins, regardless of the votes. And an arch-conservative Supreme Court could stand poised to thwart a constitutional challenge to this state power grab. We have the opportunity to stop this in its tracks — by pouring resources and attention into key state legislative chambers and races immediately. What we do next for our states could determine the fate of our democracy.

In the year since the Capitol riot, Republicans have made their 2024 play well known. Step one in this strategy is to pass state-level laws making it harder to vote. And indeed, Republican-controlled state legislatures enacted far more restrictive voting laws in 2021 than in the past decade. Step two is to change state laws so that partisan actors can interfere with election processes or reject election results outright. Here too, we see the strategy in action: At least 14 states enacted laws in 2021 that give state legislatures more power over election administration and certification, or impose criminal penalties on election officials. More were proposed but not passed, including an Arizona bill that would have given the state legislature power to undo the certification of presidential electors by a simple majority vote, right up until the inauguration. Looking ahead, at least 100 restrictive bills have been pre-filed for the 2022 legislative session or will carry over from 2021.

These state law changes will lay the groundwork for Republican legislatures to challenge and discredit any 2022 and 2024 election results with which they disagree. And it won't take many states passing election subversion laws in order to tip the scales in 2024. In his hamfisted legal efforts to challenge the 2020 election results, Trump and his team focused on just six states to flip the results: Arizona, Georgia, Michigan, Nevada, Pennsylvania and Wisconsin. His efforts failed, but not necessarily because Republican state legislators weren't supportive. The real problem was that those states' laws didn't give the legislatures the authority to jettison the votes and go their own way. Republicans learned this lesson, and are pursuing state legislative action now, to tee things up for election subversion or reversal whenever they need it.

But would such state laws be constitutional? Can Republicans really engineer their way into power by rigging the rules? The conservative machinery has anticipated this potential objection, and has also prepared a legal strategy that would further imbue their efforts with the veneer of legal respectability.

Once a stealth effort in right-wing legal circles, the Independent State Legislatures doctrine is rising in prominence as a result of election-related litigation in state supreme courts and the federal courts, much of it related to the "Big Lie." This doctrine argues that the U.S. Constitution gives state legislatures the sole authority to set all election rules — including the assigning of Electoral College votes — independently and with no possibility of judicial review. This means that election laws set by state legislatures would supersede any rights provided in state constitutions, or even ballot initiatives passed by voters. It effectively concludes that there can be no possible checks and balances on state legislatures' authority over election law. While this might sound like a fringe belief, four justices on the Supreme Court have already indicated some level of support for this doctrine — and Amy Coney Barrett has yet to weigh in.

We ignore what is happening in our state capitals at our democracy's continued peril. As we reflect on a year since the Jan. 6 riot, we must be clear-eyed about the dangers to our democracy ahead, and the outsized role that state legislatures will play in the looming battle. Next time the call will be coming from inside the state house. But it's not too late. We can and must invest heavily in pro-democracy state government actors and advocates. This year's midterm elections offer us one last chance to oust MAGA-faction legislators and instead build progressive, pro-democratic power in our state legislatures, particularly in states like Arizona, Michigan and Pennsylvania, where newly redistricted state legislative maps may be fairer. And we must support year-round state-based power-building organizations that are doing the hard work of community organizing around progressive, pro-democracy candidates and issues. But time is running out. Will we heed the call and invest in our states — or once again be surprised to discover it's too late?

Read more on the state-level fight to save voting rights: