"And Just Like That": How "Sex and the City" sequel broadens the representation of 50+ women on TV 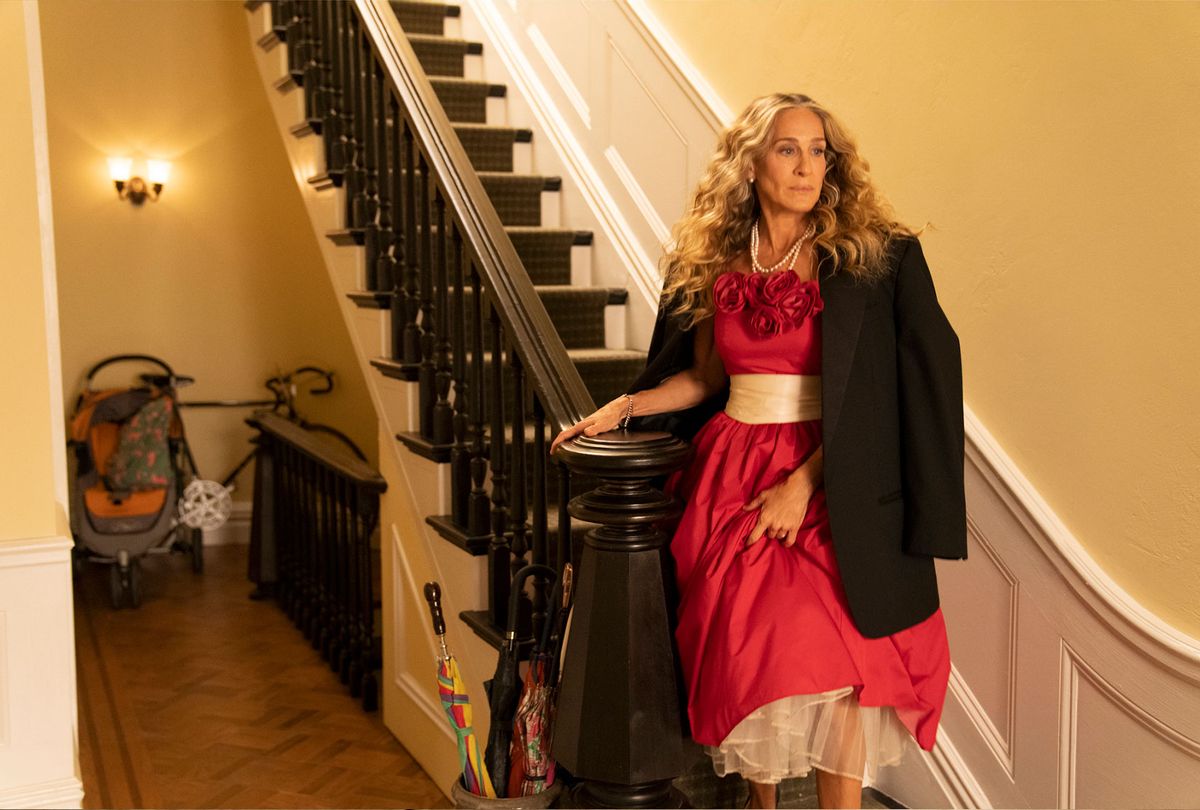 Sarah Jessica Parker in "And Just Like That..." (Craig Blankenhorn/HBO Max)
--

On the eve of release of the "Sex and the City" sequel, "And Just Like That," I was excited. The show follows Carrie, Miranda and Charlotte as they navigate life at 50 in a world that has changed quite a lot from that in the 2000s.

I really wanted to see how Carrie, Miranda and Charlotte might navigate a different world after nearly 20 years. When it comes to TV narratives about older women, we, the audience, may still have hang-ups about their representation, and what we imagine their lives are supposed to be about. But in recent years those representations have evolved with shows such as "Grace and Frankie" — and now "And Just Like That." These series give us the humour of "The Golden Girls" but a richer landscape of the interior lives of older women.

The age (and wealth) gap between myself and the characters in "Sex and the City" has not changed with "And Just Like That," but I feel much closer to their age-related struggles now than I did in the late 1990s and early 2000s. I was pleasantly surprised to see that some of my earlier hopes were realized in the series.

Now there are comments on looks (to dye the grey hair or not to dye?) but they do come in a conversation about how a woman can be taken seriously no matter what she looks like. However, this is not what really gives me hope and joy about watching these seasoned Gen Xers living out loud in their 50s. There is a lot to celebrate — but for me it is Miranda's story that resonates the most.

A lawyer at the top of her career with a loving husband and son, Miranda seemingly has the happy ending. But in "And Just Like That" she is setting herself down a new uncertain path. For her, her 50s are a time for rediscovery and learning as she returns to education to retrain as a human rights lawyer. There are also hints that she might start exploring her attraction beyond men. I just earned another university degree to support a change in career — and I, too, started exploring my queerness later in life.

While older women continuing to be sexual beings is not new for TV, a protracted look at how they grapple with emerging or latent queerness is breaking away from the usual tropes and a refreshing change from the focus on heterosexual middle and older age.

Carrie's childlessness-by-choice also resonates now in a way it did not when I was engaged to a man in the early 2000s, and naively thought having a child was an inevitable part of female adulthood and marriage. Older women are often portrayed as wives and mothers. If they are childless and divorced, their stories can often be tinged with sadness or desperation.

Over the past decade, childlessness among all women has increased for numerous reasons — prioritizing careers or concerns about the state of the future and the environment being just a few. It seems fitting that more stories reflect this increasingly common reality for older women.

Now that I am in my early 40s, "And Just Like That" highlights for me is that awkward fumbling is not just for teenagers. As adults we never stop awkwardly moving through life because it is always changing, and so are the rules.

Getting older with Frankness and Grace

"And Just Like That" still highlights, as "Sex and the City" did before it, that friendships with women are relationships that deserve attention and intention. Similar to when they were younger, maybe, romantic loss presents new opportunities and adventures for older women. Instead of familiar sad depictions of lonely divorcees and widows, older women can form new, non-romantic bonds and explore unchartered areas of their potential.

We see this new hopeful take on romantic ends in the Netflix series, "Grace and Frankie" (2015), which is about two retired women who become unlikely friends after their husbands announce they are in love with each other. Its premiere comes 30 years after NBC's "The Golden Girls" (1985), which was also about how older women's lives endure even when their marriages don't, or their children fly the nest.

In their 70s, Grace and Frankie are living more boldly on TV now than Blanche and the other Golden Girls were in their 50s and 60s. That's right, the Golden Girls were the same age as the "And Just Like That" characters are now. Take a moment. It threw me, too since they seem so much older. More importantly, as a show that centers the friendship of two septuagenarians, "Grace and Frankie" represents a changing portrayal of women in this age bracket. Whereas many women this age recede into the background in supporting roles, this series shows that older women are not just relevant, but can explore the kaleidoscope of their existence through different eras and different phases.

I had hoped this reboot would be more self-aware around the privileges of their whiteness and class positioning. I also really wanted Carrie and the girls to interact more meaningfully with women of color and younger generations. While it still has some work to do on this front it has fulfilled my hopes for how it represents 40+ women.

Both "Grace and Frankie" and "And Just Like That" remind us that women's identities are not limited to wives, mothers or romantic interests. So what a time to be alive. To see older female characters portrayed with depth, authenticity, humor and shades of awkwardness in the ways we are now accustomed to seeing female characters in their teens, 20s and 30s. Now, if we could just broaden, with frankness and grace, the focus on older women outside of the white, upper middle-class, heterosexual range, I would be grateful. Please and thank you.