Biden just delivered the most forceful rebuke of Trump's coup — but what will he do about it?

Joe Biden gave the best speech of his presidency on the anniversary of Jan. 6. So what happens now? 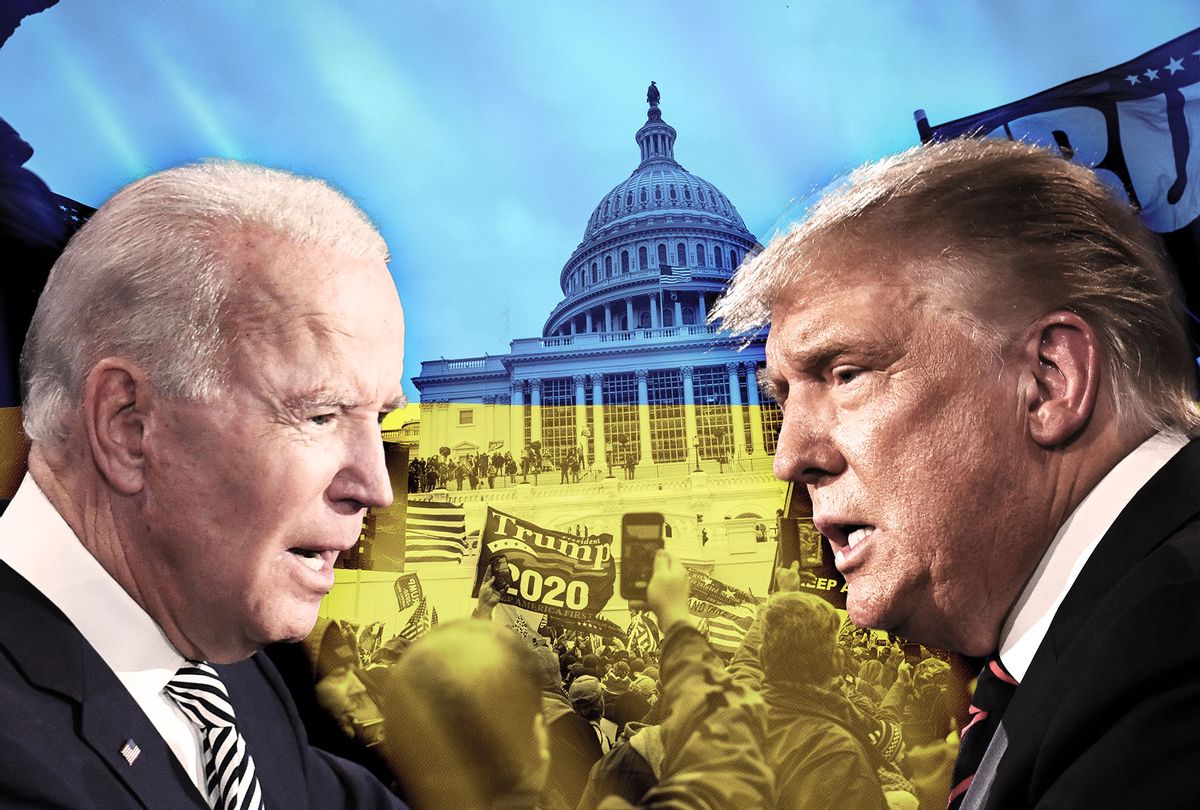 I don't think anyone has ever said that Joe Biden is a great orator. In fact, he's probably one of the least gifted presidential speakers I can remember. Maybe George Bush Sr. was equally mediocre, but that's not saying much. However, yesterday, on January 6th, Joe Biden gave the best speech I've ever heard him give and I suspect it may actually be remembered as an important one. The speech marked a shift in both tone and substance on a matter of monumental importance that hopefully signals a new strategy to try and save our democracy.

Despite opening his campaign in 2019 with a strong condemnation of President Trump's unprincipled behavior and a call to "restore the soul of America," Biden hasn't really talked much about the ongoing Republican threat to democracy since he's taken office. And he has scrupulously avoided talking about Donald Trump because the White House reportedly felt feared further elevating the disgraced former president. But the anniversary of January 6th was the day they decided to put democracy at the top of the agenda — and it was none too soon.

Biden's speech was fiery and rhetorically effective. Despite never using his predecessor's name, he took the fight to Trump, something that simply cannot be avoided any longer whether the White House likes it or not. Biden went right for the jugular, evoking Trump 16 times in the speech, calling him a "defeated former president" (emphasis on the word defeated), declaring that Trump's outsized ego won't allow him to admit he lost. And that's the truth – Donald Trump is the greatest sore loser in the history of the world.

The former president of the United States of America has created and spread a web of lies about the 2020 election. He has done so because he values power over principle. Because he sees his own interest as more important than his country's interest, than America's interest. And because his bruised ego matters more to him than our democracy or our Constitution. He can't accept he lost.

Biden almost certainly had some real hope that he could bridge the bipartisan divide when he took office and he was determined to give it the old college try. He's thrown in the towel. He made it clear that the Republican Party is just as guilty as Trump. While praising those who have stood up for democracy (which we can count on one hand), he said this about the rest:

Too many others are transforming that party into something else. They seem no longer to want to be the party of Lincoln, Eisenhower, Reagan, the Bushes.

They don't even want to be the party of the prince of darkness, former Vice President Dick Cheney, who showed up in the Capitol for the commemoration and stood next to his daughter, the only two Republicans to attend. (Right-wing media immediately went for his throat, of course.)

At the moment of silence for the Capitol Police officers who died, there were only two Republicans who showed up.

An extraordinary image of where this country's politics are right now. pic.twitter.com/IJ2YS2y2yN

He didn't let the MAGA cult off either, which I think was gutsy:

You cannot love your country only when you win. You can't obey the law only when it's convenient. You can't be patriotic when you embrace and enable lies.

Naturally it was instantly slammed by Republicans fatuously clutching their pearls and claiming it was "divisive" (nothing new in that) and whining that Biden was "politicizing" Jan. 6, which is hilarious. Nobody but former House Speaker Newt Gingrich had the brass to evoke Lincoln to slam Biden, however — and mess it up so badly:

If you read Lincoln's Second Inaugural and Biden's speech today you will understand the difference between greatness bringing us together and a mean spirited vicious partisan hack trying to drive a deeper wedge in the country he is supposed to lead.

Fondly do we hope — fervently do we pray — that this mighty scourge of war may speedily pass away. Yet, if God wills that it continue, until all the wealth piled by the bond-man's two hundred and fifty years of unrequited toil shall be sunk, and until every drop of blood drawn with the lash, shall be paid by another drawn with the sword, as was said three thousand years ago, so still it must be said "the judgments of the Lord, are true and righteous altogether."

Basically, it was "we can put the country back together but if you think we're going to go back to the way things were you've got another thing coming." Interestingly, in response to a reporter's question, Biden did echo Lincoln's famous words "let us strive to bind up the nation's wounds" when he said, "the way you have to heal, you have to recognize the extent of the wound," which is something Lincoln, after four years of bloody civil war, already knew, but he would certainly have appreciated Biden's understanding of the situation.

The modern Republican Party's undisputed leader, Donald Trump, himself issued a flurry of hysterical statements in which he said Biden "used my name today to try to further divide America," and claimed that listening to him was "very hurtful to many people." (He also went through his usual litany of lies about the 2020 election in tedious, obsessive detail, as he does most days.)

Rep. Matt Gaetz, R-Fla., and his pal Rep Marjorie Taylor Greene, R-Ga., held a little press conference that nobody watched in which they threw out conspiracy theories about the FBI starting the insurrection and otherwise babbled incoherently.

Greene: I don't want to have anything to do with a government that is so obsessed overturning regime change in our own country pic.twitter.com/8jFHE53Xtc

Biden said that we are at an inflection point in history and I agree. Our politics are not normal and they aren't getting any better. If anyone thought that Trump leaving office would "break the fever" they need a new thermometer. The question now is what is he — and what are we — going to do about it?

Biden is headed to Georgia next week to talk about voting right legislation and the desperate need to shore up our electoral system. Will he be able to rally the two Senate divas, Kyrsten Sinema and Joe Manchin, to the cause and persuade them to allow an exception to the filibuster to save our democracy? At this point that really is the only question, isn't it?