We could have turned fully fascist back then. Let’s hope we don’t do that now 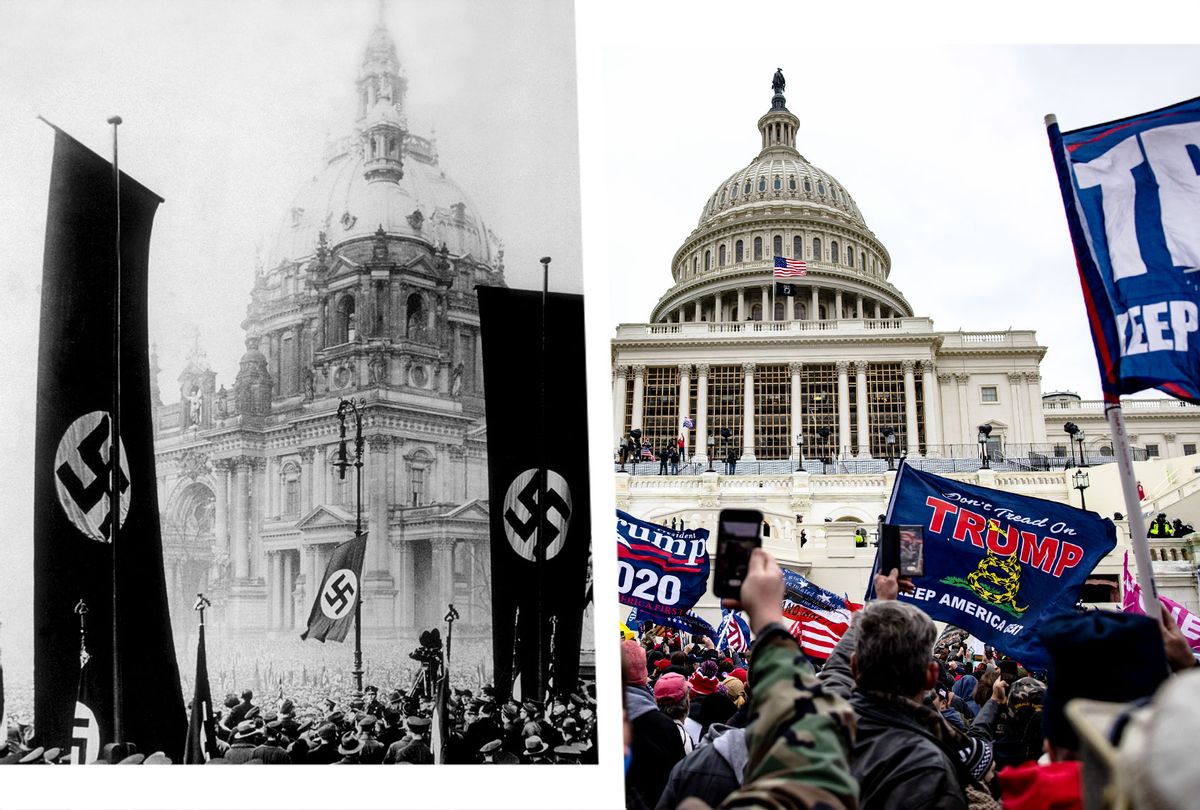 Nazi parade in front of the Reichstag, 1934. | Pro-Trump supporters storm the U.S. Capitol following a rally with President Donald Trump on January 6, 2021 in Washington, DC. (Photo illustration by Salon/Getty Images)
--

These "paradigms" have been for more than a year a regular subject of discussion between me and Jay Weixelbaum. He's a writer and business historian who's producing a streaming mini-series about the time a Nazi spy joined US businessmen to toast the fall of France in a Manhattan hotel while a Jewish FBI agent investigated.

Jay's project is called A Nazi on Wall Street. (You can donate to the cause here.) During our conversation, he explained why he believes we are moving into a new paradigm and how the choices made in the 1940s seem to mirror choices being made in the 2020s. We could have turned fully fascist back then. Let's hope we don't do that now.

In a recent thread, you said the J6 insurrection was a watershed moment between "paradigms." Can you explain what you mean by "paradigms." What does J6 have to do with them?

A "paradigm shift" describes a major change in our lives. The term "status quo" describes a time when we have a shared understanding about how politics work, how economics work and how culture works. When a paradigm shift happens, the status quo changes.

Paradigm shifts can take many years, and my belief is that we know we're in one when it's not just scholars pointing this out – but when everyone sees it and feels it. January 6 was a moment like that.

Many historians have observed that the Republican Party had been in the business of rejecting democratic ideals since the passage of the Civil Rights Acts in the 1960s. They were unwilling to share democracy with people they deemed were less than them.

Watergate was part of this. The 2000 election and the 2016 election were other watershed moments of the GOP's slide toward a full rejection of American democracy. I see J6 as a culmination.

Can you characterize the paradigm we are leaving and perhaps the one we are entering?

Paradigms are a buildup of chaos in our political, economic and social systems, as unresolved problems feed off each other. In chaotic periods, even small events can have enormous impact. We're right in the middle of the shift, so it's hard to see where we are going.

The reason I'm adapting my research on American businessmen working with Nazis in 1940 into a streaming mini-series is because in 1940, it really wasn't clear which way things were going. That was a paradigm shift, too.

READ: Cult survivor explains how Trump 'weaponizes' the 'us vs. them' tactics of a 'cult leader'

We grow up with stories about a triumphant America that won World War II, but in 1940, it wasn't at all clear how history was going to play out. I want American audiences to understand that, especially as we inevitably look back and reflect on our current moment,

Just as 2020 was a crucial year. I believe 2022 will also decide our fates for the next era, however long it will be. Democrats in Congress are beginning the process of altering the filibuster to pass voting rights legislation this week, which is a direct response to GOP legislatures passing laws to throw out millions of votes they may happen to dislike. Democratic leaders call this a "continuation of January 6."

That's crucial, and we don't know how this will play out.

Another big, unpredictable factor is the pandemic. I think future historians (provided humanity survives) will debate how covid helped push the previous president out of power, particularly his lack of ability to address it effectively.

A third major factor is the midterms. Yes, the previous status quo predicts the party holding the White House to take losses. But if we are headed toward a new status quo, the rules may no longer apply.

Corporate donations to GOP House candidates is about half of what it was. And gerrymandering, while still a major threat to democracy, hasn't played out as badly as it could have after the 2020 census.

Also, depending on how the Supreme Court rules on reproductive choice, this may dramatically affect turnout.

So there's still a bunch of unknowns that could have a major impact in this critical turning point.

When did this start? With the white backlash against civil rights?

The civil rights era and feminism in particular, as well as a hostility to the New Deal, animated the right. They built up religious and allegedly libertarian factions in the 1970s that coalesced in the "Reagan Revolution," which could then be escalated for four decades.

History is always events leading to and from each other. There are certainly antecedents in the 1920s and 1930s GOP. It was taking money from literal Nazi spies in order to try to sweep FDR out of power.

Our government knew this was happening. There was an intense and often unseen struggle to fight back against this Nazi-American rightwing coalition.

Is this the 1940s fork in the road you were talking about?

Yes, precisely. Like with other paradigm shifts, there were years of building to this point, and years of aftermath. Nazi spies were operating in the US in the 1930s. The FBI was tasked with tracking them down. Meanwhile, US companies had businesses operating within Nazi Germany.

Beyond these lesser known activities, rightwing groups and personalities espoused the Nazi cause to millions of Americans. Many Americans found this ideology enticing. It's easy to blame immigrants for problems; many Americans believed the US should stay out of European affairs; some Americans were sympathetic to Germany post-World War I. The radio priest, Charles Coughlin, broadcast these views to millions. He was kind of the Rush Limbaugh of his day.

Nazi influence in the US culminated with a huge march and rally in New York City in 1939. Thousands gathered in Madison Square Garden to listen to blatantly fascist speeches under the banners of George Washington adorned with swastikas.

In 1940, FDR gave a fresh directive to hunt down Nazis. The FBI built a secret spy headquarters inside the 30 Rock building to spy on Nazi activities worldwide, but especially in South America where they could get raw materials a war machine needs to be effective.

Without recapping the story of WWII, FDR was reelected, despite Nazi groups funneling money into Charles Lindbergh's campaign. FDR started providing aid to Britain and preparing for war against fascism. Thus, the paradigm shift started to turn on the events of 1940.

The president pinned blame for J6 on Trump. No sitting president in my lifetime came within an inch of calling his predecessor a traitor. That seems like an indicator of paradigm shifting no?

Absolutely. I don't think we've seen anything like this since at least the Civil War. The evidence is so overwhelming, I think Biden was on safe political ground to take off the gloves.

It's also important to point out that fascist violence often starts with the war on the truth. Biden was making a clear point to push back on fascist lies.

I'd call the Republicans' sabotage of pandemic recovery a form of fascist violence, but that's just me.

I think that's also a fair observation. Fascism is unsustainable as a form of government. It's inherently irrational and destructive. It's an extreme form of populism based on emotions – feelings of grievance, more specifically. That's an inherently unstable foundation to attempt to run a society.

Perhaps this ties into your observation about "civil war." It would take sacrifice of an order that most people would reject.

Exactly. I think the potential for violence and destruction is great. But I don't see that as long term, because people won't tolerate a consumer economy being interrupted so drastically by violence and disruption.

Scholars of Nazi Germany saw this. Just below their fake bravado, the Nazis were terrified about economic problems. We'll never know how the Nazi regime might have worked if it hadn't made foolish military choices, but it's pretty clear that things were quite unstable.

I think the Republican Party has been able to lean toward anti-democracy and fascism precisely, because it still rested on a liberal democratic order. Take that away and it's a new status quo

Yes! Fascism is a parasite on liberal democracy, but it can kill its host. Then all bets are off on how long it will survive.

What would tell you the coming midterms are different from previous midterms?

Preserving democracy is a key policy issue. It will be a particular policy point discussed in numerous midterm campaigns. Typically it's healthcare, guns, climate, etc. Democracy as policy is a new norm.

Telling people that they need to vote now or they won't be able to depend on the vote in the future is pretty drastic and I'd argue a new development. We saw it in 2020. It'll be here for 2022.