The GOP is suddenly running scared from Trump's Big Lie 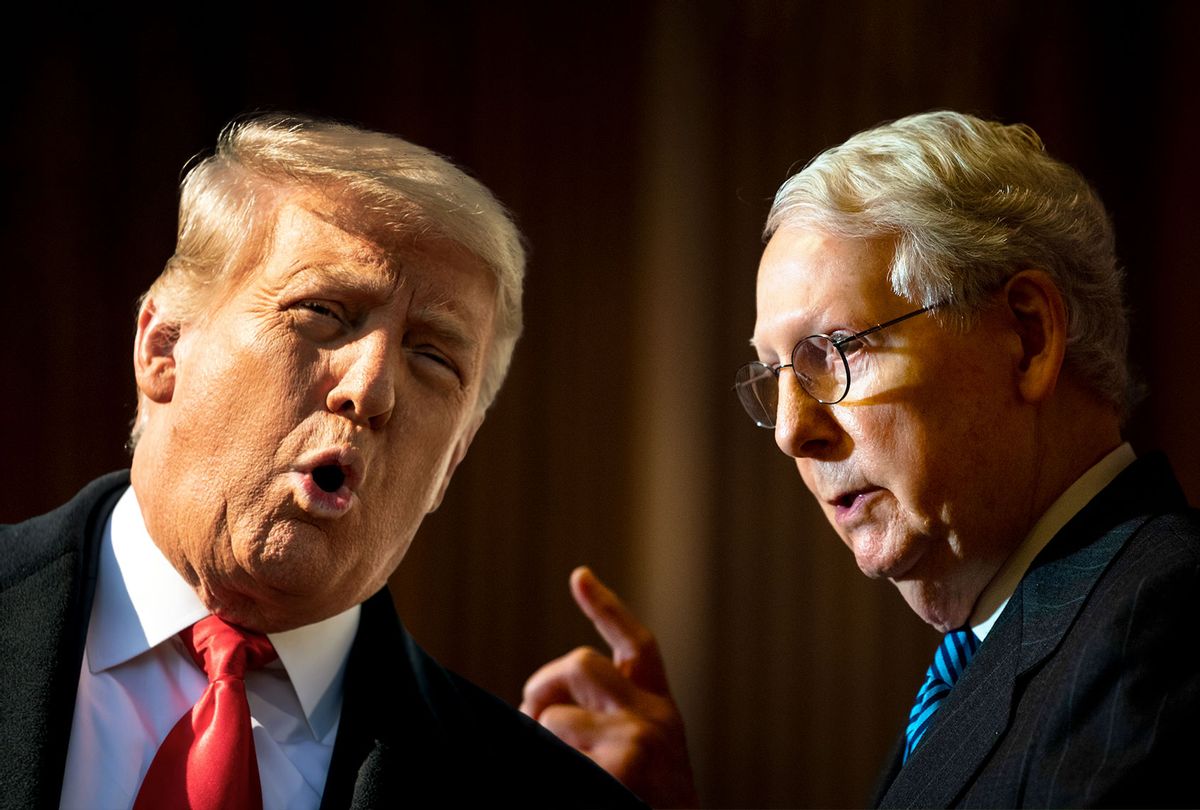 Something unusual happened last weekend that may portend a little bit of dissonance in the Republican Party. A conservative senator went on television and directly refuted Donald Trump's Big Lie.

ABC's George Stephanopoulos asked Sen. Mike Rounds of South Dakota, "What do you say to all those Republicans, all those veterans who believe the election was stolen, who have bought the falsehoods coming from former President Trump?" Rounds responded:

We looked -- as a part of our due diligence, we looked at over 60 different accusations made in multiple states. While there were some irregularities, there were none of the irregularities which would have risen to the point where they would have changed the vote outcome in a single state.

Trump was not a happy ex-president. He fired off a scathing response:

"Senator" Mike Rounds of the Great State of South Dakota just went woke on the Fraudulent President Election of 2020. He made a statement this weekend on ABC Fake News, that despite massive evidence to the contrary, including much of it pouring in from Wisconsin, Georgia, Arizona, Michigan, Pennsylvania, and other states, he found the election to be ok – Just fine.

Is he crazy or just stupid? The numbers are conclusive, and the fraudulent and irregular votes are massive.

Even though his election will not be coming up for 5 years, I will never endorse this jerk again.

And then the oddest thing happened. Rounds stuck by his comments.

"I'm disappointed," the Republican said, "but not surprised by the former president's reaction."

However, he continued, "the facts remain the same. The former president lost the 2020 election."

Rounds went on to argue that relitigating the past and attacking Republicans was no way to win elections. GOP Leader Mitch McConnell backed him up, saying, "I think Sen. Rounds told the truth about what happened in the 2020 election." Sens. Kevin Kramer, R-S.D.,and John Thune, R-N.D., also agreed with Rounds. And here's what Utah's Mitt Romney had to say:

What makes this unusual is not that some Republicans are speaking out about something Trump has done. Over the years, many have expressed shock and dismay over some of his crude insults or egregious behavior, but they always back off once they realize that the rank and file are sticking with him. Soon after the night of the January 6th insurrection, when so many congressional Republicans made bold declarations of independence from Donald Trump, most slunk back into their safe spaces, afraid to admit what he did that day for fear of angering the base. On the one-year anniversary of the Capitol riot, Politico took a look at all Trump's cabinet members who resigned from the administration in protest and found that none of them had spoken out since.

No, what makes Rounds' comments, and the powerful senators backing him up even in the face of Trump's spittle-flecked rebuttal, unusual is what they are saying. Top Republicans in the Senate are now disputing the central organizing principle of the GOP in 2022: the Big Lie.

A Washington Post-Amherst poll released last week showed that only 21 percent of Republicans believe that Joe Biden was legitimately elected, which tracks with most other polling over the last year. Donald Trump's relentless pounding of this issue, day in and day out, starting even before the election was held in November 2020 has done its work. Republican officials all over the country have used Trump's sore-loser strategy to change voting laws, install partisans in the election system and generally prepare the ground to dispute elections whenever Republicans don't win. The Big Lie is now the central organizing principle of the GOP.

RELATED: The evolution of Trump's Big Lie: Republicans retool their conspiracy theory for the mainstream

All of this has the effect of not only validating the mistrust in the electoral system with Republican voters, it's shaking faith in the system among Democratic voters as well. After all, if elections are being overseen by partisan Republicans chosen specifically for their willingness to back Trump's delusional insistence that he won an election he lost by 7 million votes, people will be hard pressed to put much faith in the integrity of their decisions. This is not a problem for the GOP which will be happy to see Democrats flailing about trying to contest elections that really were "rigged." They are not afraid of that.

So why are these Republicans testing the waters by speaking out about the Big Lie now? After all, it stands to benefit them if they can wire elections in their favor. But Rounds' other comments make clear what they are concerned about. They are afraid that all this demeaning of the election system will keep their own voters from the polls In his first comments Rounds said:

[I]f we simply look back and tell our people don't vote because there's cheating going on, then we're going to put ourselves in a huge disadvantage. So, moving forward, let's focus on what it takes to win those elections. We can do that. But we have to let people know that they can -- they can believe and they can have confidence that those elections are fair.

He followed up later saying:

Why are we having that discussion today? I think because we're getting closer and closer to 2022, in which we want people to get out and vote. We want them to have faith in the election process. We want them to feel like they're a part of it and that their vote really matters."

And while he only mentioned it in passing, these folks are very worried about Trump's attacks on Republican incumbents and the fringe weirdos he's endorsing to replace them.

Many smart Republicans understood that Trump's insistence that the election was stolen was largely responsible for the loss of the Senate because of the way his lies played out in Georgia with the two Senate runoff races that sent Democrats Raphael Warnock and Jon Ossoff to Washington. It's fair to assume that they hoped Trump would fade away by now and they could carry on about their business without having to confront him on this. But he's still lying and there's no getting around it.

Will this challenge hold up any better than any of the other times a few Republicans tried to stand up to Trump? Who knows? But as the Democrats continue to struggle in the Senate over the vital voting rights legislation that could help stave off some of this partisan electoral engineering based on the Big Lie, it's interesting that there's some nervousness among the GOP leadership about how it might affect them negatively as well.

Imagine if they could summon the intestinal fortitude to really do the right thing and acknowledge that a bipartisan vote to secure voting rights for everyone (as has been done regularly over the past 30 years) could go a long way toward solving all these problems? I'm not holding my breath.