A vegetarian pastitsio for when "you don't eat no meat"

This Greek classic is usually meat-heavy, but this version manages to be just as hearty with vegetables and lentils 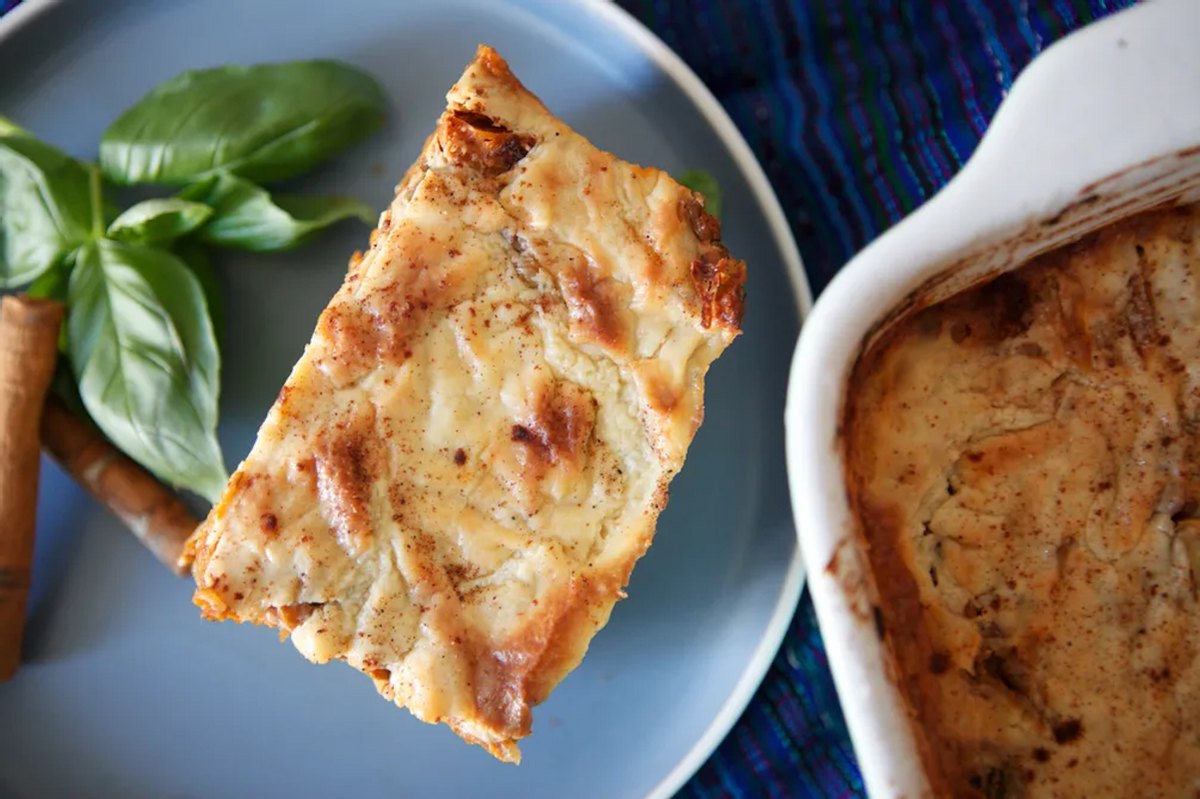 It's a line from "My Big Fat Greek Wedding" that brings the engagement party to a halt. Horrified faces turn to the xénos (foreigner), Ian Miller. Aunt Voula looks at her niece, the bride-to-be Toula Portokalos, as if to telepathically chastise her: "How can you, a Greek, marry a vegetarian?" Then, the solution comes to Aunt Voula and she pats Ian on the arm. "That's okay," she smiles. "I make lamb."

It's a quote that comes up every now and again when I'm with my wife Melanie's Greek-American side of the family. See, I'm a bit like the Ian Miller in our marriage. My side of the family is small in numbers, though my parents weren't stale like the Millers. Melanie's side can be more eccentric, like the film's Portokalos family, but they didn't fashion their home based on the Acropolis.

And though I'm not a full-fledged vegetarian (I'll sometimes eat meat if I'm a guest in someone's home and they offer), I'm the closest thing to a vegetarian in the family. That means my wife, Melanie, and I make classic Greek dishes without meat. To my mother-in-law, a Greek-American through and through, dishes like moussaka, soutzoukakia, and pastitsio are made with meat. End of story.

Melanie is a bit more flexible. Over the years, we've mostly stopped cooking with meat. It's for a lot of reasons, chief among them the carbon footprint of the meat industry and its generally deplorable treatment of both animals and workers. At this point the knowledge is so commonplace, it's practically its own depressing category of documentaries on Netflix. (If you liked "Animal Tears" then you'll love "Meat Murders.")

This shift in our diet meant figuring out how to make those culturally meaningful dishes sans meat. One of Melanie's first attempts led to this vegetarian pastitsio. Traditionally, it's a layered Greek pasta dish baked in the oven. From bottom to top you've got your bucatini noodles, ground meat, and béchamel sauce. Some call it "Greek lasagna," but I don't think it's so much to ask to learn how to pronounce the dishes we're making (he says, ascending his soapbox).

To replace the ground meat, we use a simple mirepoix (that's fancy French for onions, carrots, and celery) with lentils cooked in vegetable stock seasoned with cinnamon, nutmeg, and oregano. The mirepoix is topped with Greek béchamel sauce, invented by Nikolaos Tselementes, an early-20th-century Greek chef who brought the mother sauce to Greece. Tselementes added an egg yolk to the traditional recipe, modernizing recipes for dishes like moussaka and pastitsio.

In the end, I don't miss the meat. It's still a deliciously creamy, flavorful, and hearty dish that fills my imagination with visions of a Greek taverna on a quiet island or memories of Sunday family dinners with my in-laws and Yiayia sitting next to me, insisting I eat more.