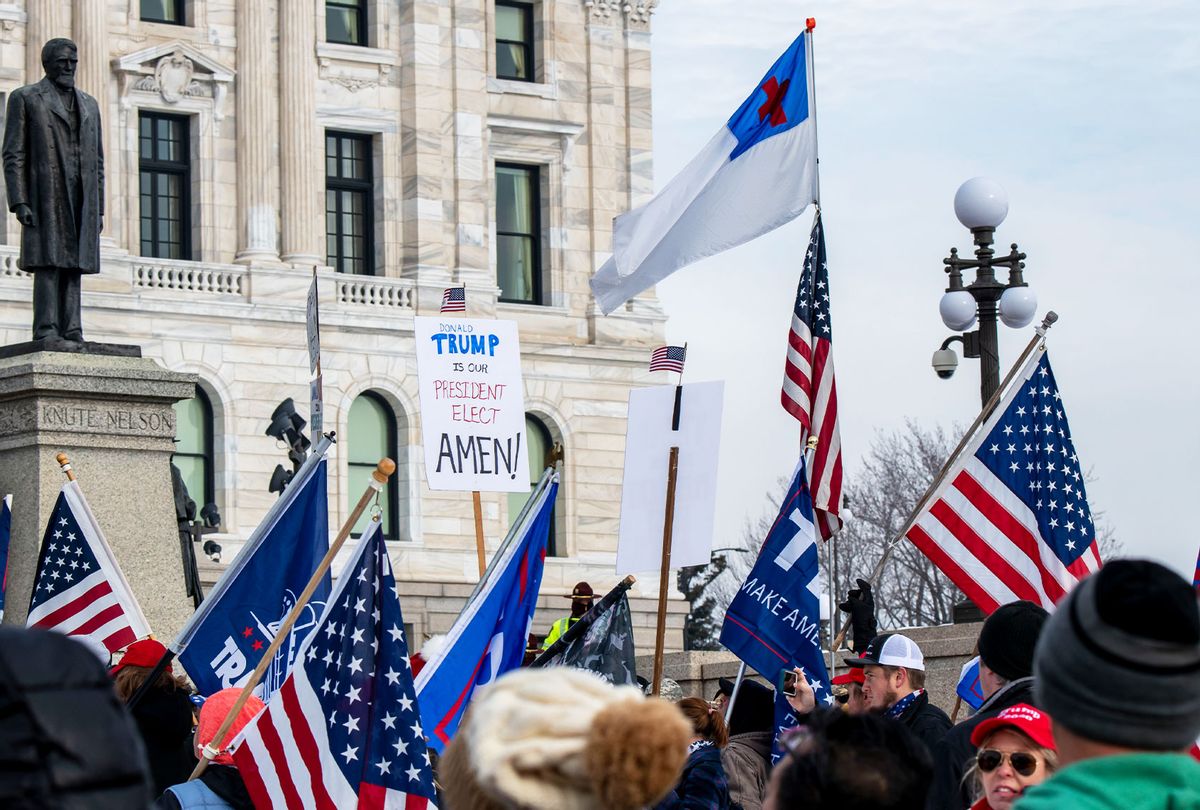 In the late 19th century, a Sunday school leader in New York, Charles C. Overton, called for the creation of a Christian flag: a white banner with a blue field and red cross. The colors were meant to symbolize, respectively, purity, loyalty and the blood of Christ, but they also clearly mirrored those of the American flag. And when a pledge was later developed to accompany Overton's flag, it similarly entangled Christianity with patriotism, offering a Christianized version of the Pledge of Allegiance. For decades, the flag has been a fixture in conservative churches and religious schools, but many Americans saw it for the first time on Jan. 6 of last year, when rioters paraded it onto the floor of the House of Representatives.

On Tuesday, the Supreme Court heard oral arguments in a case about that flag, Shurtleff v. Boston. The case revolves around complicated constitutional questions about the interplay of the First Amendment's clauses concerning free speech and the government establishment of religion, but it also speaks to the growing prominence of Christian nationalism — with its highly dubious claim that the U.S. was founded as a Christian nation, and that Christians should therefore enjoy a privileged place within it — and its demands for public accommodation. The arguments yesterday also suggested that the case might, at least hypothetically, open the door for neo-Nazis and white supremacists to demand to fly the swastika or Confederate flag, the Proud Boys flag or even, warned Boston's lawyer, a Yankees flag, on public property.

In September 2017, a Christian nationalist group called Camp Constitution requested permission to hold a "Constitution Day" event at Boston City Hall to highlight the role of Christianity in America's founding. For the duration of the hour-long program, the group wanted the city to raise the Christian Flag on one of the three flagpoles on the City Hall grounds. On two of those poles, Boston always flies the U.S. flag, the Massachusetts state flag, and the military memorial POW/MIA flag. About 90 percent of the time, the third pole flies Boston's city flag, but occasionally that gets replaced to commemorate different events: the rainbow flag during LGBTQ Pride Month, or Juneteenth's starburst banner to mark the end of slavery in Texas, or other nations' flags, either to recognize a visiting foreign dignitary or to honor Boston's different ethnic groups. Between 2005 and 2017, Boston agreed to 284 applications to raise a private, non-city flag. But in 2017, the city denied Camp Constitution's request to fly Overton's.

The city's position was that doing so would imply a government endorsement of Christianity, in violation of the First Amendment. Camp Constitution founder Harold "Hal" Shurtleff argued instead that the denial violated his First Amendment right to free speech, since the city was refusing him access to a public forum of sorts — the flagpole — that had been made available to groups with other viewpoints. Shurtleff lost his lawsuit against the city in a federal district court and then an appeals court, but last June, represented by the Christian right legal organization Liberty Counsel, he successfully requested that the Supreme Court consider the case.

"It's really a free speech case, about how there are legal rules governing free speech for individuals that don't apply to government speech," said Holly Hollman, general counsel of the Baptist Joint Committee for Religious Liberty (BJC), which advocates against government sponsorship of religion and last week dedicated an episode of its podcast to the Shurtleff case. "The government's interest in not promoting a religion is a sort of backdrop."

The question boils down to whether whatever flies atop Boston's municipal flagpoles represents government speech from the city itself or just that of private individuals who are participating in a public forum the city has provided. If the flagpole is deemed to be government speech, Hollman said, there's no question about whether the city can be compelled to "speak" about religion — in fact it would be prohibited from doing so. But if the court rules that Boston had unwittingly "designated some kind of forum for private speech, then free speech rules would require them to let people in, regardless of their viewpoint."

The legal questions in the case have brought together some unusual bedfellows. While church-state separation advocates, led by the ecumenical National Council of Churches, warn that a government entity flying a religious flag would be widely interpreted as the endorsement of that religion — a message that Boston sees itself as a Christian city, promoting the Christian faith — both the ACLU and President Biden's Justice Department have filed briefs in support of Shurtleff. In doing so, they joined groups like Notre Dame's Religious Liberty Initiative, which charges that Boston's "exclusion of religious perspectives from the public square" is "antithetical to the Founders' conception of religion as central — not peripheral — to our national order."

In light of that interpretation, advocates argue that it's important to understand how Shurtleff highlights the growing prominence of Christian nationalist ideology.

"This is a high-profile opportunity for people who merge their understanding of what it means to be American and what our Constitution holds with Christian preferentialism," said Hollman. "The Constitution is explicitly not a Christian document. It does not favor Christianity. So it's dangerous that the idea that our nation is somehow tied up in Christianity, legally, is being promoted by this group in such a high-profile way."

Last week, at the religious issues Substack called A Public Witness, the Rev. Dr. Brian Kaylor and the Rev. Beau Underwood, who are respectively Baptist and Disciples of Christ pastors, published a long investigation into Shurtleff and his organization's background. They note that Camp Constitution, which inspired a candlelight vigil on the Supreme Court steps Monday night, also peddles merchandise celebrating Kyle Rittenhouse and classes on the "Deep State," 9/11 trutherism and "exposing the New World Order." Shurtleff himself worked for more than two decades as a field director for the far-right John Birch Society. In that capacity, in the early-2010s, he drafted model legislation to block the UN's "Agenda 21" — a non-binding environmental measure that became the subject of feverish one-world government conspiracy theories — that was introduced in numerous states.

These days, Kaylor and Underwood write, Shurtleff helps oversee a far-right group called Super Happy Fun America, which is tied to white nationalists and, among other things, hosted a 2019 "Straight Pride" parade, organizes events to protest pandemic public health measures, and chartered buses to bring hundreds of people to Washington on Jan. 6, 2021. He's appeared publicly alongside right-wing heroes like disgraced former Arizona sheriff Joe Arpaio (who was convicted on contempt charges after ignoring a court order to stop detaining undocumented immigrants who had committed no crimes, and then pardoned by Donald Trump) and Oath Keepers founder Stewart Rhodes, who was recently charged with sedition for his alleged actions in and around the Jan. 6 attack. Shurtleff regularly issues outrageous, fact-free claims, such as that the Black Lives Matter movement has killed more Black people than the Ku Klux Klan and the Deep State is trying to reduce the population by promoting homosexuality.

"The fact that Shurtleff holds a lot of weird and offensive conspiracy theory ideas" has no bearing on his standing in this case, Kaylor told me. "But the Christian nationalist ideology found in Camp Constitution is relevant to understanding the claims in dispute about the Constitution here.

"My fear with this case is that Christian nationalists basically want to throw away the non-establishment clause," he continued, referring to the First Amendment's prohibition of any "established" or official state religion. "They don't see 'establishment' as a problem, because if we were founded as a Christian nation, then we should be one today."

Indeed that seems to be Shurtleff's ultimate goal. He told Kaylor and Underwood that he hoped a favorable Supreme Court ruling could set a precedent for reinstating religious instruction in public schools and allowing religious groups use of government buildings.

"The importance of the case will depend on how the court decides it, if Shurtleff wins," said Hollman. "It may be on the simple idea that Boston unintentionally opened up a forum for private speech" and then kept one specific group from exercising it. "That's not a remarkable win. On the other hand, if Shurtleff wins, he might use that to promote the idea that government has to promote religion or that a government has to speak about religious matters."

A win that declares Boston's flagpoles as open forums for public speech could have significant implications, since the First Amendment's bar on viewpoint discrimination is absolute, as Ian Millhiser writes at Vox: "Not only would Boston be forbidden from excluding religious flags, it would also be forbidden from rejecting swastikas, Confederate flags, or flags endorsing the failed January 6 effort to install former President Donald Trump as an unelected leader."

When it comes to the "Christian flag," that distinction is pretty blurry, since Kaylor points out that in recent years, that flag has become associated not with Christianity writ large, but with Christian nationalism — and, increasingly, with white nationalism as well. In an earlier article at A Public Witness, Kaylor and Underwood note that the Christian flag has been used almost interchangeably with the Confederate flag in a number of instances since 2015, including at the reinterment, last June, of Nathan Bedford Forrest, a Confederate Civil War hero who became the first grand wizard of the KKK, along with his wife.

"Such back-and-forth swapping between the flags occurs because of claims by defenders of the Confederate battle flag that it is a 'Christian' symbol for what they believe was a 'Christian' nation," Kaylor and Underwood write. "With White Supremacists needing more palatable symbols amid a backlash to Confederate imagery, we will likely see an increased effort to co-opt Christian symbols like Overton's flag to convey these ugly messages."

More on the rising power of the Christian right in the Trump era: