"Do not invoke Congressman Lewis’ name to signal your virtue while you work to erode his legacy," Ossoff demanded 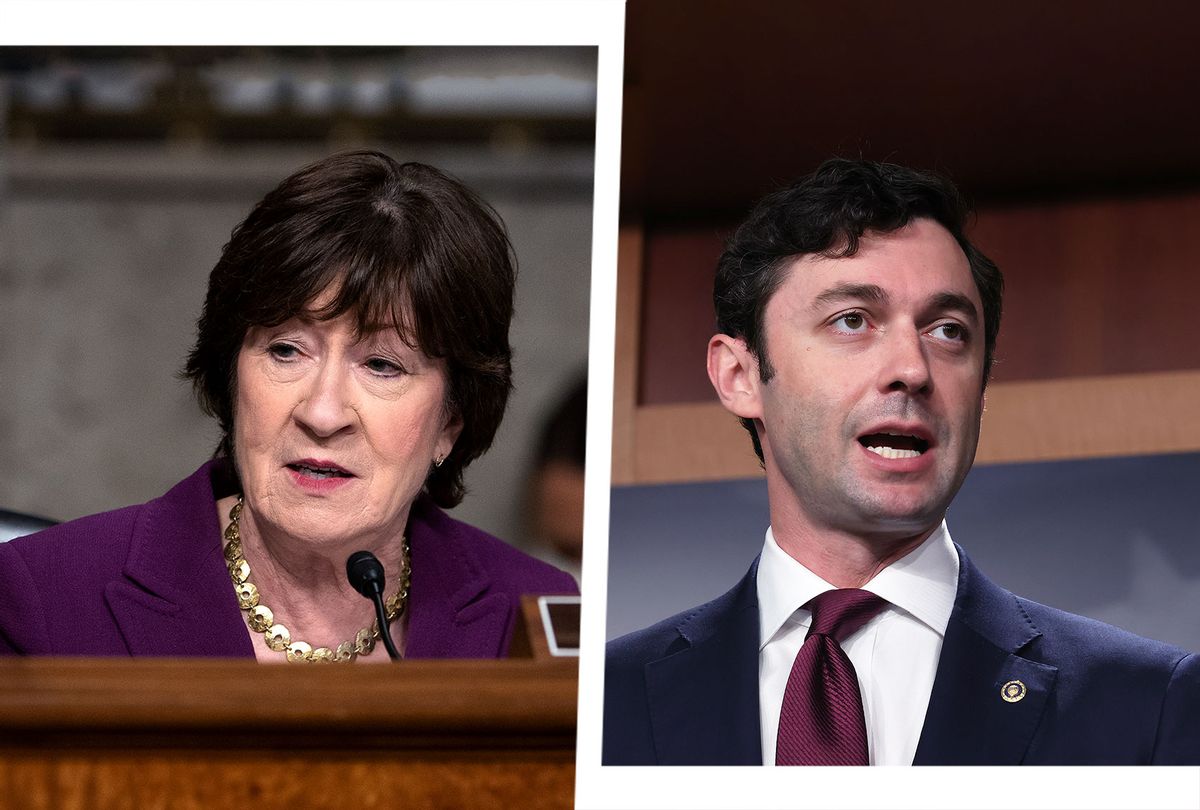 Ossoff, the youngest member of the Senate, called out the fifth-term senator before she joined the Republican filibuster to block the voting rights bill. Democrats later held a vote to change the filibuster rule in an effort to advance the legislation but as expected, Sens. Kyrsten Sinema, D-Ariz., and Joe Manchin, D-W.Va., joined every Republican in the chamber to sink the rules proposal, and with it likely the Senate's last hope of passing voting rights legislation ahead of the 2022 midterms.

Ossoff called out Collins, a self-described moderate, for opposing the John Lewis Voting Rights Advancement Act despite voting to reauthorize the Voting Rights Act in 2006.

"Abraham Lincoln must be turning in his grave to hear the senators from the Grand Old Party, the party of abolition and emancipation and reconstruction, echoing the states' rights rhetoric of Dixiecrat segregationists to oppose federal voting rights legislation," Ossoff said.

RELATED: "Vote her the hell out": Progressives target Kyrsten Sinema after her filibuster defense

Collins took issue with Ossoff's remarks, suggesting he risked violating a rule banning senators from imputing "to other Senators any conduct or motive unworthy or unbecoming a Senator."

Collins argued that the Voting Rights Act still allows the Justice Department to challenge laws if they restrict voting rights. Ossoff countered that a Supreme Court decision in 2013 gutted a portion of the law that allowed the DOJ to block voting restrictions in states with a history of racial discrimination before they went into effect, a provision the act named for John Lewis would restore.

Ossoff noted that Collins previously said that reauthorizing the 1965 Voting Rights Act would "ensure that the voting rights afforded to all Americans are protected" and accused Republicans of hypocrisy for praising the late Rep. John Lewis, D-Ga., while opposing the bill named after him.

"I speak for the state of Georgia when I say do not invoke Congressman Lewis' name to signal your virtue while you work to erode his legacy and defy his will," Ossoff said.

Collins argued that to "equate that to the legislation that is before us" to the 2006 reauthorization is "simply not worthy."

"I'm not sure that the senator from Georgia was even born in 1965," she said. "I voted enthusiastically and I did say that about the Voting Rights Reauthorization in 2006, and surely my colleague is not confusing that bill, which was five pages long ... with the bill that is before the Senate tonight, which is 735 pages long."

Scott, the lone Black Republican in the chamber, accused Democrats of pushing "a negative, false narrative" that is "offensive not just to me or Southern Americans, but offensive to millions of Americans who fought, bled and died for the right to vote." Scott argued that the fact that three of the 100 members of the Senate are Black shows that minority voters are not "being suppressed."

"Don't lecture me on Jim Crow," Booker fired back. "I know this is not 1965. That's what makes me so outraged — it's 2022 and they're blatantly removing more polling places from the counties where Blacks and Latinos are overrepresented. I'm not making that up. That is a fact."

Booker noted that Black voters statistically have to wait in line to vote twice as long as white voters.

"In the United States today, it is more difficult for the average African American to vote than the average white American," Booker said. "That is not rhetoric, that is fact."

But all the rhetoric and facts could not convince Sinema and Manchin, who have opposed filibuster rule changes for months, to change their minds, although both voted to support the voting rights legislation itself.

More than a half-dozen Republican senators lined up to shake Sinema's hand after the vote, including Sen. John Kennedy, R-La., one of the GOP members who voted to block the certification of Joe Biden's victory after the Capitol riot of Jan. 6, 2021.

Manchin argued that changing the filibuster would "break" the Senate and inflame partisanship while Sinema argued that if the filibuster rule was changed Republicans could roll back voting rights and impose other partisan legislation with a simple majority.

"Eliminating the filibuster would be the easy way out," Manchin said. "I cannot support such a perilous course. ... It's time we do the hard work to forge the difficult compromises that can stand the test of time."

The doomed vote likely means that the Senate will not pass any new voting rights legislation ahead of the midterms amid the wide array of voting restrictions passed by Republican-led state legislatures, which Biden said on Wednesday threaten to make elections "illegitimate."

Sen. Raphael Warnock, the other Georgia Democrat elected last year — who faces a difficult battle to win a full term this fall — also vowed that Congress would try again to pass voting rights legislation, though it's unclear when or how.

"Despite tonight's vote, we cannot turn away," Warnock wrote on Twitter. "This will not be the last opportunity we get to fight for voting rights. We will meet the moment again, to try again. And again. Until we succeed."

Read more on the struggle to save voting rights: