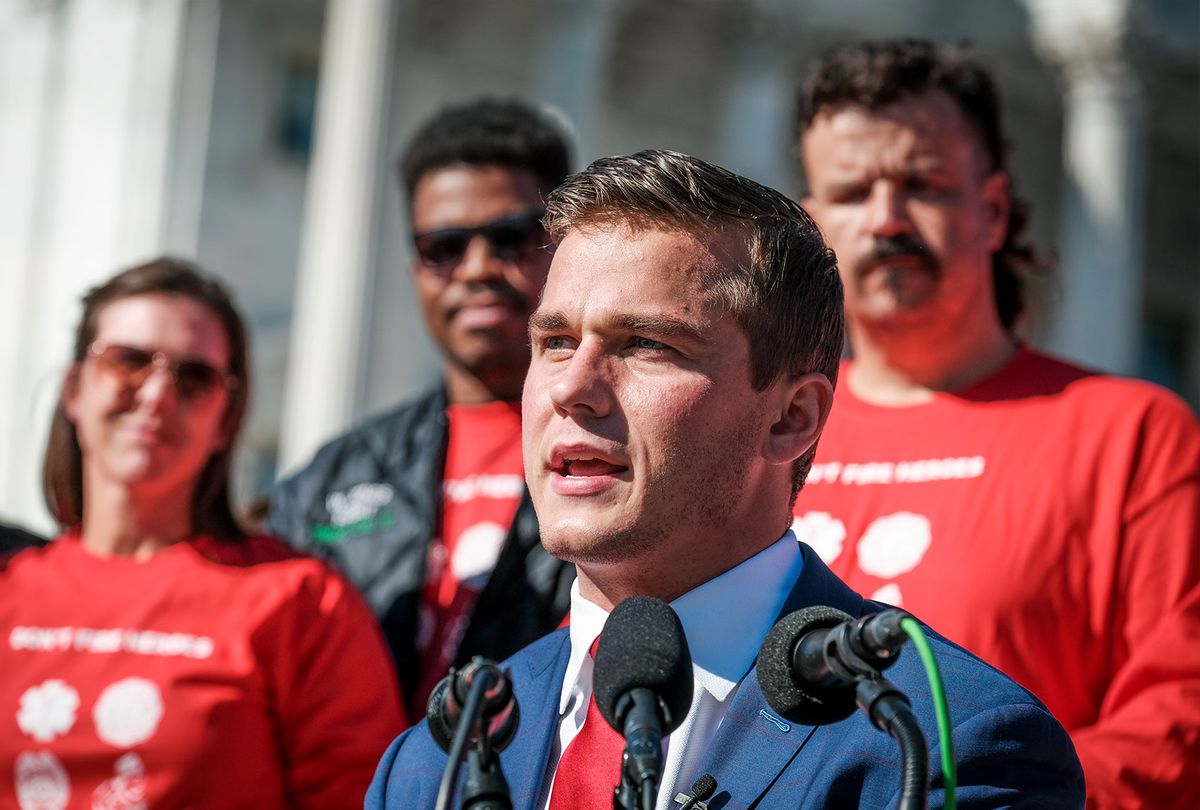 Rep. Madison Cawthorn (R-NC) speaks during a press conference in front of the U.S. Capitol on November 1, 2021 in Washington, DC. (Pete Marovich/Getty Images)
--

Rep. Madison Cawthorn, R-N.C., decided that a House Veterans' Affairs Committee hearing on toxic chemicals killing American soldiers would be a good time to clean his gun, drawing the fury of witnesses who testified.

Cawthorn participated in the hearing via Zoom, apparently from his congressional office, so the public could not see what he was doing, but some witnesses who appeared before the committee definitely noticed. Veteran Lindsay Church, the co-founder of Minority Veterans of America, spoke at the hearing and later tweeted a photo of Cawthorn holding his gun backward.

"Imagine you showed up for a Zoom meeting and a colleague decided that was when he needed to clean his gun," Church tweeted. "Because that's what happened today in a Congressional roundtable on toxic exposure. We're better than this."

Church told The Daily Beast that Cawthorn's behavior at the hearing was "misguided and lacking the dignity of his office."

"He was doing this while the ranking member of his own party was conducting actual business," Church said.

The hearing focused on toxic burn pits. The military for years burned trash, including toxic chemicals, in pits near military sites in Afghanistan, Iraq and other locations. Veterans and other experts spoke for nearly three hours on Thursday about how soldiers stationed near burn pits have developed serious heart, lung and other ailments, likely from exposure to the toxic chemicals, although the Department of Veterans Affairs has limited disability benefits to some of the veterans.

"That is insane," Rosie Lopez Torres, the founder of Burn Pits 360, told the Daily Beast of Cawthorn's behavior. "Total disregard and disrespect to America's warfighters. He was so bored with the topic. Those that are sick and dying and the widows in his district should see how much he cares about the issue."

John Feal, a 9/11 first responder who was at the virtual hearing, told the outlet that Cawthorn's actions were "immature."

"He's a child. He lacks common sense," he said. "I think the congressman was overcompensating for something that he lacks and feeling inadequate among the heroes on that call."

Witnesses told the Daily Beast that Cawthorn continued to clean his gun for several minutes but it was only visible during the testimony of Jen Burch, an Air Force veteran who served in Afghanistan. Cawthorn appeared to be in his Capitol Hill office at the time.

"Here we are taking time out of our day, including the representatives, to talk about a very important issue — a life or death issue for many veterans — and it's like, I'm sorry am I boring you? You're not paying attention," Burch told Task & Purpose.

Luke Ball, a spokesman for Cawthorn, shrugged off the incident.

"What could possibly be more patriotic than guns and veterans?" he told the Daily Beast.

Cawthorn has frequently touted his support for the military and claimed that a car crash that left him with a permanent disability prevented him from attending the U.S. Naval Academy. But reporters later found that the academy had rejected his application before the accident.

Cawthorn last year was caught trying to bring a handgun through airport security. The congressman was not detained in the incident.

Cawthorn's apparent inattention during the committee hearing underscores how little attention Congress has paid to the suffering of veterans who have returned home with debilitating illnesses. The Veterans' Affairs Committee last year advanced the Honoring Our Promise to Address Comprehensive Toxics (PACT) Act, which would provide health care for up to 3.5 million veterans exposed to airborne hazards and burn pits, but the bill has yet to get a full House vote.

Comedian Jon Stewart, who used the first episode of his new Apple TV+ show to highlight the frustrations of veterans and their families bogged down by bureaucratic hurdles while seeking live-saving health care, called out Congress' inaction at Wednesday's hearing.

"We are a country that loves its veterans, or certainly would purport to. We support the troops, and we put on our flag pins and we stand, and they get discounts at Denny's. But the true support of having a veteran's back is when they need the support," Stewart said. "Our country exposed our own veterans to poison for years and we knew about it and we didn't act with urgency and appropriateness," he added. "And therefore, we've lost men and women who've served this country. They've died out of our inaction."