An A-to-Z guide to every single type of pasta

Plus recipes, of course! 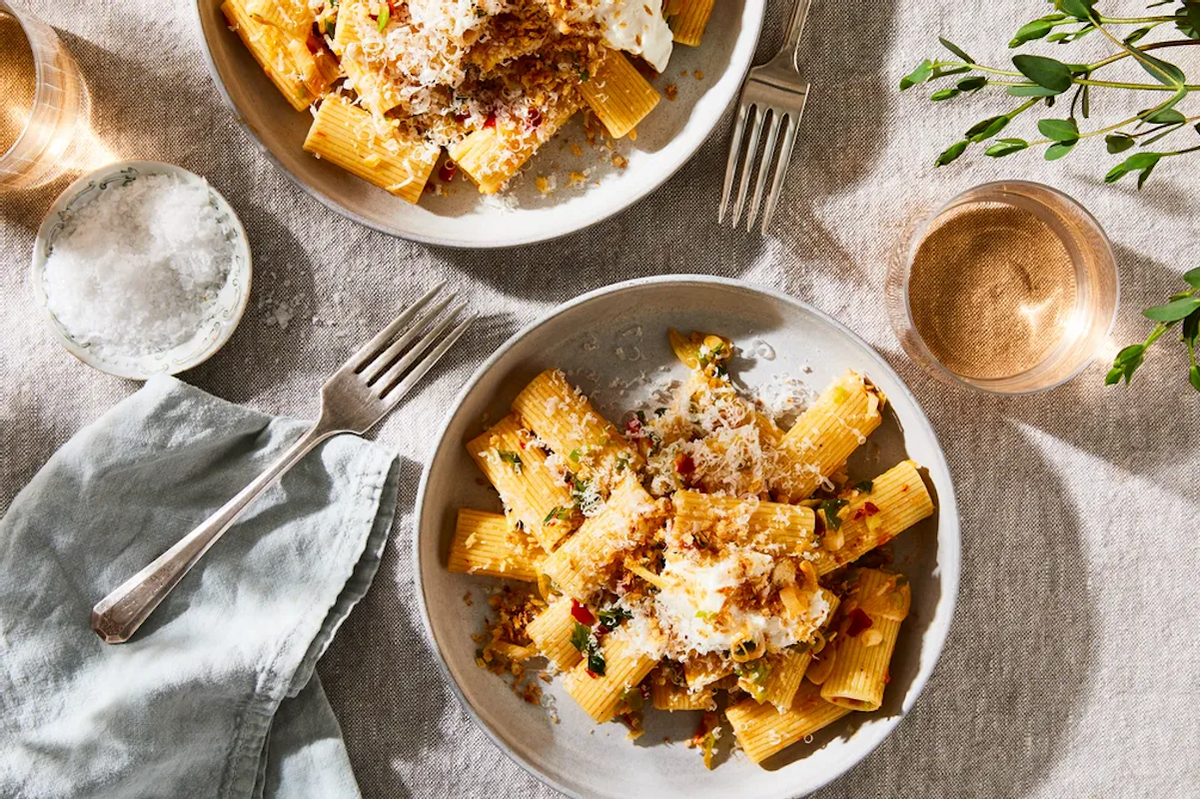 The only dictionary I want to read is the A-to-Z guide of pasta. There are so many different shapes, ranging from long, thin strands to tube-shaped pasta, that the category really needs its own dictionary. This list is not nearly exhaustive, as there are, as I said, so many different shapes of pasta. But these 30 types of pasta are the most popular. These are the ones you're likely to find in your regular grocery store or served as part of a pasta dish at an Italian restaurant, the ones that will make you think, "I've heard of that, but I don't know what it is." Well, now you'll know!

A guide to popular types of pasta

Angel hair is a quick-cooking, super thin noodle that is sometimes sold under the name "capellini." Capellini literally translates to "thin hair," but angel hair has a nicer ring to it, don't you think?

Beautiful bucatini looks similar to spaghetti, albeit slightly thicker. What makes this noodle special is that each one has a small hole that runs through the center of it, which is like a secret tunnel for vodka sauce or amatriciana sauce.

This pasta shape not only sounds like calamari, but it actually resembles it, too. Originally from Naples, these wide, thick rings are often served with seafood pasta dishes because of their squid-like appearance.

Recipe: Calamarata with Squid in Its Own Ink

"A rose by any other name would smell as sweet." Obviously Shakespeare was referring to angel hair and capellini when he wrote Romeo and Juliet. Two kindred spirits, destined for eternity. That is me and capellini. Or me and angel hair. They're actually the same type of pasta, just sold under two different names.

Cascatelli is one of the newest, trendiest types of pasta to capture the hearts of gluttonous gluten lovers everywhere. It was designed by Dan Pashman, host of The Sporkful podcast, who was determined to create a pasta shape that had the ultimate "sauceability, forkability, and toothsinkability." Safe to say he absolutely nailed it, since cascatelli has consistently been sold out (or required a super long waitlist) since it launched in early 2021.

This perfect corkscrew-shaped pasta is my personal favorite for baked macaroni and cheese (so much cheese sauce in every twist and turn!) or this summery Cavatappi with Sun-Dried Tomatoes, Brie, and Arugula.

Cavatelli is way underrated. You'll generally only find it as fresh pasta served in a restaurant. Like orecchiette (which you'll meet a little later), cavatelli is usually served with broccoli rabe and sausage. Think of it as a cross between orecchiette and gnocchi, as it's slightly doughier than many other rolled pastas.

I can't help but pronounce chitarra with a thick Italian accent that sounds like I have lived in southern Italy for decades (or rather, makes it sound like I wish I'd lived in southern Italy for decades). Chitarra actually refers to the tool used to cut spaghetti by hand, which resembles guitar strings. When you see "spaghetti alla chitarra" on a menu, just know that it's spaghetti made with a little extra love.

I was introduced to elbow pasta around the age of three, when I first started eating boxed macaroni and cheese. Eventually, Kraft came out with other fun shapes like farm animals, SpongeBob SquarePants, and rocket ships, but when all else failed (or when the store was sold out of SpongeBob because it was every kids' favorite), there was always a box of elbow macaroni and cheese to fall back on. Elbow macaroni generally comes in two sizes (small and large), and I love them both.

Oh, why hello there, Mr. Farfelle. I didn't know this dinner was a black-tie affair. This bow-tie-shaped pasta comes from northern Italy and is a popular choice for kid-friendly pasta dishes and pasta salad.

Recipe: Homemade Farfalle — How to make bowtie pasta yourself!

You know and love fettuccine. It's generally the widest long noodle option available in the average U.S. grocery store (if they don't carry pappardelle), and it is the key player in everyone's favorite Italian-American dinner: fettuccine alfredo.

Fusilli looks like my bedhead if I haven't slept on a silk pillowcase, which is to say a short, tight, corkscrew shape. It's a popular choice for pasta salads, mainly because it has so many nooks and crannies that are perfect for cradling sauce, herbs, grated cheese, and other add-ins.

The first time I met garganelli was the first time I ever felt true love. It was that perfect feeling of "Where have you been all my life?" It's kind of like penne, but it's not. It's kind of like cavatelli, but it's not. Garganelli are handmade using egg pasta dough, which is formed and cut into small squares and then rolled like a baby's swaddle. It hails from Emilia-Romagna in Italy, and while you can certainly find it stateside these days, it's not always readily available in the average supermarket.

Some people would argue that gnocchi is not pasta, but rather a pasta-dumpling hybrid. But I, a gnocchi lover, feel that it deserves to be included in this generous roundup of pasta shapes. Gnocchi is made by combining mashed potatoes with all-purpose flour and eggs to form a dough. The dough is portioned, rolled into thin logs, and sliced into bite-size pillows that are quickly cooked and served any which way. (My personal favorite is when they're tossed with marinara sauce, a little ricotta, fresh basil, and lots of fresh mozzarella, then transferred to individual gratin dishes and baked until bubbling…just in case you were wondering.)

In terms of thickness, linguine is in between spaghetti and fettuccine. You might know it by its award-winning performance in box-office hits like Linguine with Clams, Parsley, and Lemon. It's wider and flatter than spaghetti but not quite as wide as fettuccine. Make sense?

Recipe: Linguine with Breadcrumbs and Kale

Think of mafaldine as half-width lasagna noodles. Also known as reginette (which is Italian for "little queens"), this ribbon-shaped pasta is flat and wide with ruffled edges. For some reason, it's often served with lobster, blistered cherry tomatoes, and a cream sauce. I don't question it. I just eat it.

Translating to "little ears," orecchiette are most likely to be found hanging out with sausage and broccoli rabe in a shallow bowl. This shape actually has roots in southern Italy and, like its other southern Italian pasta cousins, is usually made with semolina flour.

If you like rigatoni, you will love paccheri. They're essentially shorter, stubbier, and wider pasta noodles, compared to rigatoni. You're more likely to find smooth paccheri, but some versions are ribbed, which we prefer for chunky meat sauces like bolognese.

If fettuccine or linguine are boxed hair dye, pappardelle is balayage. Which is to say, they're kinda the same, but one is obviously much better. Pappardelle are some of the widest egg noodles you'll find on menus and in the grocery store. It's more difficult to score than fettuccine or linguine, but it is totally worth the scavenger hunt and a little extra money. Bigger isn't always better, but in this case, it absolutely is.

Pici are underrated for a number of reasons. For starters, they're entirely hand-rolled, which is not only an art form of sorts but one that requires no special equipment. They're also usually made with an egg-free dough, which means it's a great choice for anyone who is vegan. And also, they're delicious! Pici is essentially a thicker, rounder, hand-rolled version of spaghetti (you can absolutely use it in place of its more popular relative in any pasta recipe).

Ravioli can describe a shape and type of pasta, as well as a dish. Ravioli are either square or round pieces of stuffed pasta filled with anything and everything from meat sauce to spinach and ricotta to lobster to mushrooms. They're always made by hand using a stamp (essentially a ravioli cookie cutter) or a mold that looks like an ice tray, but instead of ice, it makes ravioli.

Rigatoni is the quarterback of the pasta world. It rarely breaks under pressure (unless it's way overworked). It's dependable, loyal, and guides other important players to the field, er, bowl, like chunky sauces, lots of Parmesan cheese, roasted squash, or crushed tomatoes. (But take this with a grain of salt. I'm a food writer, not a sportscaster.)

Rotini and fusilli are very similar, but the former has slightly tighter screws. They're absolutely interchangeable in a recipe, and no one would ever be able to tell the difference.

Shells provide the ultimate shopping experience because they are sold in every size from extra small to extra-large. Small shells are ideal for soups or homemade macaroni and cheese, whereas the biggest ones are just waiting in the wings to be stuffed with spinach and ricotta.

Is it the most exciting type of pasta on this list? No. Is it the tastiest? No. But what it lacks in mystery, it makes up for as a key figure in classics like spaghetti pomodoro or spaghetti and meatballs. It's a long, thinnish strand of pasta, but then you already knew that, because who doesn't know what spaghetti looks like?

Oh, these are good. Everytime I look at tagliatelle, I get amped to make pasta. This long strand of pasta is ever so slightly wider than fettuccine, but you'd probably have to get out your tape measure to tell the difference between the two. It hails from the Emilia-Romagna region of Italy, and I'm booking a ticket there as I write this so I can tour its homeland.

This is another long noodle that is very similar to spaghetti. It's been described as being in between capellini and tagliatelle, which, to me, sounds like spaghetti. However, it's often only presented in the form of eggy fresh pasta, so it has a more vibrant yellow hue and more complex flavor compared to dried spaghetti.

Pretty much the only time you'll come across this long thin noodle is in cacio e pepe, aka adult mac and cheese, aka the ultimate comfort food. Think of it as squared-off, ever-so-slightly thicker spaghetti. But does it really matter? You know you're going to order the cacio e pepe no matter what pasta shape it's served with.

Another stuffed pasta! The literal Italian translation is "small little pies," so yes please to this meat-and-cheese-filled pasta. Tortellini are served two ways — sometimes you'll find them just tossed with tomato sauce and baked or with olive oil and roasted veggies. But the more traditional, and I think more special, presentation is in the form of tortellini soup, where these little pockets float in a warm, savory broth.

Recipe: Smoky Minestrone with Tortellini and Parsley or Basil Pesto