With new subpoenas, Jan. 6 committee closes in on its ultimate target: Donald Trump

Rudy Giuliani, Sidney Powell and the others summoned this week had better be careful: They're walking into a trap 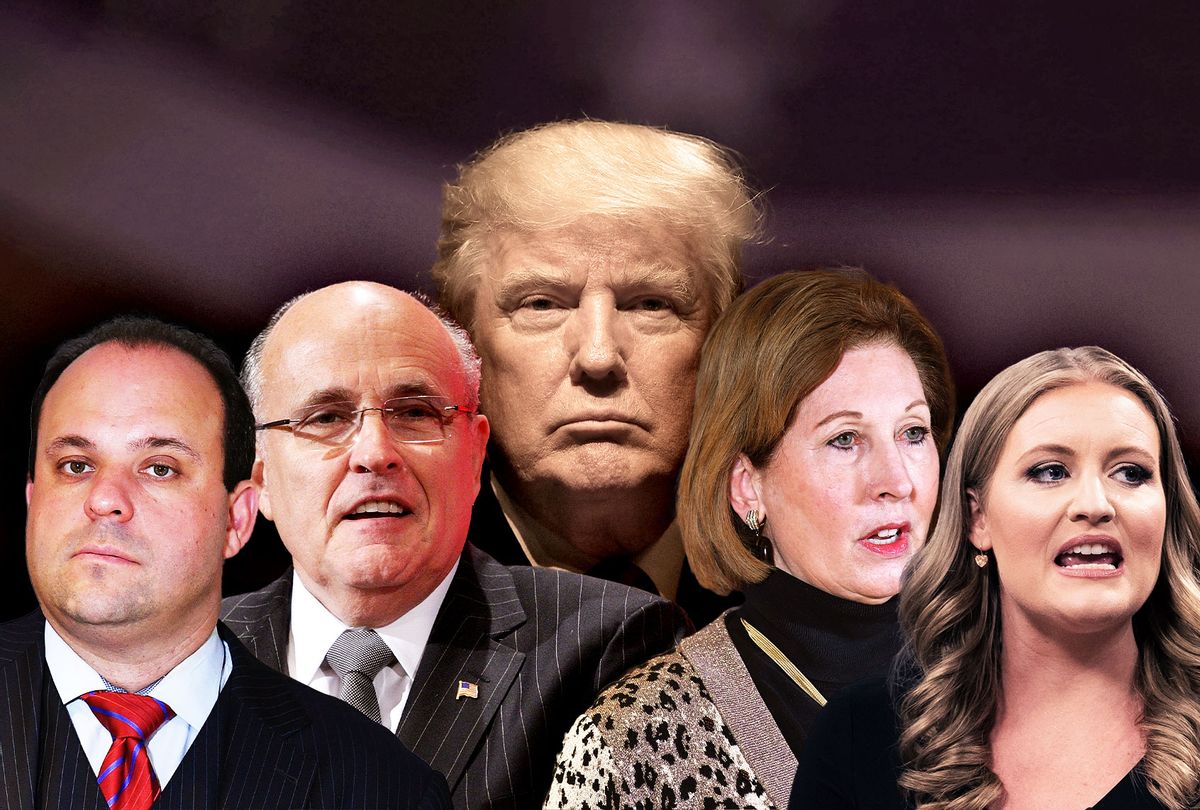 Lawyers, investigative reporters and congressional committees have one thing in common: They like to ask questions they already know the answer to. That's the big takeaway from the four subpoenas issued by the House committee investigating the assault on the Capitol on Jan. 6 of last year. On Tuesday, the committee subpoenaed former Trump lawyer Rudy Giuliani; former Michael Flynn lawyer and "election fraud" conspiracy theorist Sidney Powell; former Trump legal adviser and evangelical law professor Jenna Ellis; and former Trump adviser and TV commentator  Boris Epshteyn. If this committee's investigation is being run like many others I've followed over the years, they already have the answers to most of the questions they plan on posing to all four of these witnesses.

I realize that everyone they just subpoenaed is a "former" of one kind or another, but that's where the committee is now as it closes in on people close to Trump who were involved in the events leading up to the assault on the Capitol last year. The committee has already subpoenaed a long list of Trump acolytes, hangers-on, former administration officials and former White House employees, including such luminaries as Roger Stone, Steve Bannon, Alex Jones, Mark Meadows and Dan Scavino, the former White House director of communications.

That's just the tip of a rather large iceberg. The committee has issued 60 subpoenas, interviewed about 400 witnesses and obtained more than 50,000 pages of documents in its six-month investigation of the Capitol insurrection. Some of the witnesses who didn't appear voluntarily and had to be subpoenaed by the committee include:

And here's where it gets interesting: There are more than 300 other people who appeared voluntarily and have testified to committee investigators under oath, including at least a dozen former White House employees, some of whom were questioned for as long as five or six hours.

Under oath. Remember those words. All of the 400 people interviewed by the committee have done so under oath. That means they were subject to federal criminal charges for perjury, which means there is real pressure on them to provide truthful answers. At least some of the witnesses who appeared voluntarily also provided at least a portion of the 50,000 documents the committee has assembled, which would give even more credence to their testimony.

It was after hearing testimony for over six months that the committee issued its subpoenas to Giuliani, Powell, Ellis and Epshteyn on Tuesday. Giuliani and Epshteyn are known to have been in the "war room" at the Willard Hotel on Jan. 5, the night before the assault on the Capitol. Committee Chair Bennie Thompson announced that the committee already knows that Epshteyn was on a phone call with Trump on the morning of Jan. 6, which means that they were informed of this by another witness. See what I mean about investigators already knowing the answers to questions they intend to ask certain witnesses?

If I were Epshteyn or Giuliani or any of the others, I would be very worried right now. Let me assure you, as a longtime observer of these kinds of investigations, including Watergate, it is never a good sign if you are among the last of the witnesses to be subpoenaed by an investigative committee or a prosecutor. That means that they have already talked to everybody under, across and around you under oath, and you can count on the fact that they have already assembled volumes of information on your activities. Which means it would be a very bad idea to give false testimony, because the investigators you will be talking to already have the truth at their fingertips in the form of testimony by previous witnesses and documents already submitted to the committee.

Because the Supreme Court denied Donald Trump's claim of executive privilege on Wednesday, the committee will now have yet another trove of official documents, visitor lists, call logs, talking points and plans to challenge electoral ballots before they question Giuliani and his compatriots. White House documents released by the National Archives will also produce names of new witnesses the committee will want to question. One document received by the committee, and published by Politico on Friday, exposed a fantastical plan to use the military to seize voting machines and electoral records in all 50 states and have them "analyzed and assessed" by the — get this — director of national intelligence. It was, in effect, a plan for a military coup using a "national security emergency" as a pretext — the "emergency" apparently being Trump's loss in the election.

If the whole thing with the recently subpoenaed witnesses sounds like a trap, that's because it is. Investigators for the Jan. 6 committee are lying in wait for any lies Giuliani and the other witnesses might tell to cover up what they did in the days and weeks preceding the assault on the Capitol. In fact, it may be that the committee doesn't really need the testimony of Giuliani and Powell and the rest of the "elite strike force team" of legal eagles who filed and lost at least 60 lawsuits challenging the results of the 2020 election in battleground states. The committee has those lawsuits, as well as the judicial decisions either dismissing them or finding in favor of the defendants. They already have access to a voluminous record of the falsehoods in those lawsuits, all the phony "affidavits" filed on behalf of Trump and his campaign, all the false charges against Dominion Voting Systems and other outfits which have now dragged Sidney Powell and Rudy Giuliani into court to face charges that they defamed that company and others, charges which have at least temporarily cost Giuliani his law license and clearly threaten the law licenses of Powell and others.

Rep. Jamie Raskin of Maryland, a Democrat who sits on the Jan. 6 committee and is a former prosecutor, was quoted last week saying that the upcoming hearings, likely to begin later this month or early next month, "will blow the roof off the House." I'm beginning to believe it. The problem that Donald Trump and his aides like Mark Meadows and his "elite strike force team" of lawyers and the rest of them have is that lies are not advisable when you are testifying under oath. All the lies they have told since Nov. 3, 2020, about how Joe Biden "stole" the election from Trump won't hold up under the weight of thousands of pages of documents and phone records and text messages and all the other stuff from the National Archives and the documents already submitted to the committee, and they won't hold up in the face of sworn testimony by former White House aides and members of the Oath Keepers and Proud Boys charged with conspiracy who have already flipped and have been interviewed by prosecutors investigating the assault on the Capitol.

I don't have any evidence for this, but based on what I saw during Watergate and other major investigations I have followed, I would place a large bet that there is a pipeline between the Department of Justice and the Jan. 6 committee, and evidence has been flowing in both directions for months now.

When the committee, and the Department of Justice for that matter, get to the point that they're issuing subpoenas to people who were regularly in the room with the president during the days and weeks leading up to the assault on the Capitol, I would be very, very worried if I were the ultimate target of both investigations. The lid may be getting ready to come off the House of Representatives, but down at Mar-a-Lago, the roof is falling in on Trump's House of Lies.