Dust is a growing problem. What role does farmland play? 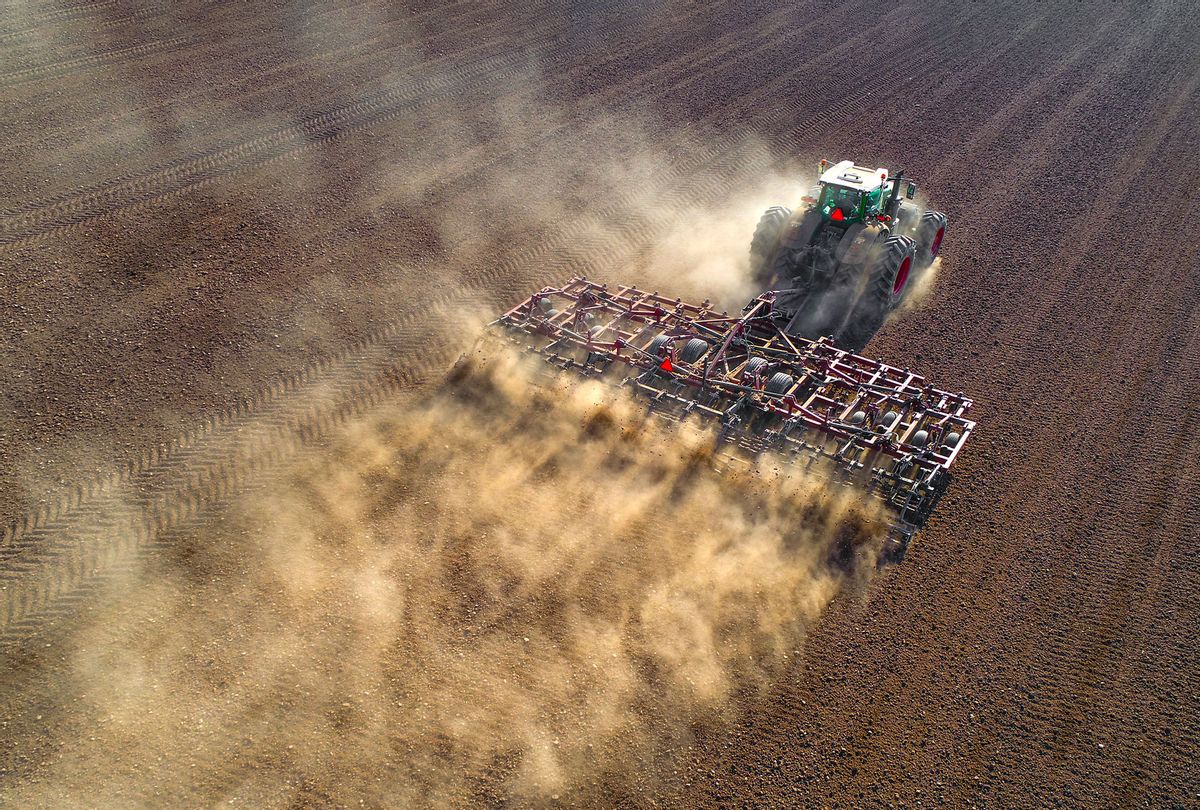 Dust storms aren't unusual in these areas, but they typically occur in the spring and at a smaller scale. And yet, as a two-decade drought persists in the West, scientists are concerned that they could become even more prevalent. This is, after all, Dust Bowl terrain. "It was never easy land to begin with; climate change is just going to make it more difficult," says Becky Bolinger, a Colorado state climatologist who shared a warning on Twitter about the possibility of a dust event the day before the storm.

Dust is a growing concern for a number of reasons. As the climate-fueled drought across the western half of the country continues and irrigation sources likely become limited on farms — resulting, potentially in the increasing the amount of bare, fallowed land — researchers are working hard to identify dust hot spots and how they are linked to agriculture.

As the percentage of dust in the air increases, so do hospital visits for respiratory complications, as well as dust-borne diseases such as Valley Fever and meningococcal meningitis. Traffic accidents are also a growing concern across the western U.S., where dust affects road visibility. In the last two decades, car crash victims and insurance companies have shown an interest in holding farmers accountable for poor practices that created dust sources — but their liability is hard to prove.

Importantly, many of today's dust events are region-wide phenomena. All fall, throughout eastern Colorado, "it's really been bone dry," says Bolinger. "I'm not sure there was much that agricultural communities could have done to mitigate the amount of dust that was up in the air."

At the same time, tillage has increased in the region in recent years as farmers work to combat a growing number of herbicide-resistant weeds, explains Eugene Kelly, a soil scientist at Colorado State University.

During the unprecedented December storm, satellite imagery captured dozens of sitesin the southeastern corner of Colorado and the Oklahoma panhandle where the dust was first lofted into the air, a region known among dust researchers as an active source area. Eastern Colorado soils are 70% windblown loess, but cultivation, grazing, construction, and roads — anything that destabilizes the soil — can generate dust, says Kelly. "These episodic events are really damaging because they can move an awful lot of material," he adds.

Read more Civil Eats: Many Restaurants Pay Tipped Workers Next to Nothing. Does that Violate their Civil Rights?

Still, scientists are working to understand "the chaotic cascade of dynamics that causes a dust storm to initiate a particular point in space and a particular point in time," says Thomas Gill, a dust researcher at University of Texas at El Paso. Nevertheless, his research points to agriculture as an important source to watch.

Gill co-authored a 2020 study using data from satellite imagery to characterize sources of dust in the Southern Great Plains. It showed that the Great Plains contained seven times more dust points than the Chihuahuan desert (over 1,200 compared to 187). Cultivated fields comprised 43% of them, while shrublands and grasslands combined contained 40%.

As the public's interest in air quality grows, as evidenced by Purple Air's network of over 10,000 air quality monitoring devices, researchers are eager to identify the dustiest sources to inform policymakers. And they will soon have new tools available. Continued advances in modeling capabilities — and soon data from satellites to be launched in 2022 and 2023 — not only promise to make pinpointing dust sources more routine, but also to enhance dust forecasting. What that will mean for agriculture is harder to predict.

One network was designed to monitor the particles that contribute to haze near national parks in order to maintain clear views. The other network, the U.S. Environmental Protection Agency's (EPA) Chemical Speciation Network sensors, are located predominantly in urban areas to implement the National Ambient Air Quality Standards.

"These were never designed to monitor dust," says Jenny Hand, an air quality researcher at Colorado State University in Fort Collins. Notably, a small percentage of the ground-based sensors from both networks are located in or near agricultural areas.

Still, the data these networks generate has shed light on modern dust dynamics. Two sizes of dust are typically monitored — PM2.5 and PM10, shorthand for particle micrometer diameters. In recent years, regulatory effort has focused largely on the smaller PM2.5 particles, which can penetrate deeper into the lungs than PM10. While interest has shifted to the health concerns of PM2.5, PM10 is still a problem. Exposure can aggravate heart disease and asthma and damage lung tissue. Recent research shows that long-term exposure to PM10 can also increase the severity and mortality of COVID-19. For example, a recent study found the relative risk of hospitalization for a range of conditions significantly increased after a dust storm in El Paso.

In fact, the nationwide decline in PM 2.5, as a result of the regulation of combustion, is an often-overlooked success story. But particulate matter is an ongoing concern, for example, in several parts of farm country.

Hand co-authored a 2019 analysis of dust particles sized between 2.5 and 10 micrometers, called "coarse mass", between 2000-2016. The study revealed that California's Central Valley, along with southwest Arizona and parts of the central U.S. — all agricultural areas — are coarse mass hotspots. And while we don't have the ability to identify the exact sources of the dust, agriculture is likely the cause given the seasonality of the dust, which is often heavy during harvest time, explains Hand.

Last year, Hand and colleagues used satellite imagery to detect a 5% increase in airborne dust every year in the Great Plains between 2000 and 2018. Not only has cropland coverage increased by 5-10% in the same region, but increases in dust have been found to coincide with the harvest and planting of dominant crops — notably, soybeans in Iowa and corn in the southern Great Plains.

"Marginal lands are the ones being developed [as farmland]," says study co-author Andy Lambert, currently a physical meteorologist at the Naval Research Laboratory. All the best farmland has long been in production and prices have been high for corn and soy crops in recent years offer a greater financial incentive than the programs such as Conservation Reserve Program, which pays farmers to leave the land undeveloped. As a result, adds Lambert, "Grassland is being developed at much higher rate than it used to be."

Scientists have been able to detect dust storms with satellites for over 55 years — but only if the satellites had the right sensors and were in the right place at the right time. For example, one of the most commonly used satellites for recording dust only takes one image at mid-day over the entire U.S. Yet dust storms often kick up in the late afternoon. When it comes to satellite imagery, there has long been trade-offs between the frequency of images, spatial reliability, and even the accessibility of the data, explains Gill.

But that is swiftly changing. NASA is upping its air quality monitoring considerably over the next year. The Earth Surface Mineral Dust Source Investigation (dubbed EMIT), scheduled for launch to the International Space Station in May, will produce maps of the minerals transported from dust-producing regions. In December 2022, NASA is scheduled to launch a new satellite called TEMPO, which promises to further enhance not only the search for specific dust sources, but also other agricultural air pollutants, including nitrogen dioxide, ozone, and formaldehyde. TEMPO will make hourly observations and produce a new dust source map for North America, which will help scientists track dust plumes backwards to their sources.

And earlier this year, Gill and colleagues demonstrated how "CubeSats," a constellation of over 200 nano-satellites orbiting close to Earth, can capture plume development in the Chihuahuan Desert. The images showed numerous distinct point sources, essentially 8% of the focus area was eroding.

Whether all this improved technology will alter land use policy or prompt more regulatory enforcement of dust-prone agricultural areas is yet to be seen. For starters, little has been done in farm country to enforce the current air quality standards.

For example, California's San Joaquin Valley is home to a great deal of the state's farmland and is one of the primary areas that has experienced increased air quality standard exceedances since 2017. According to data obtained on the California Air Resources Board website, PM10 values in the district have steadily gotten worse over the last few years.

In 2020, 18 of the 21 PM-10 monitors in the San Joaquin Valley Air Basin exceeded the 24-hour maximum standard at least once, and often several times throughout the fall months that correspond to harvest — a typically dry period when the soil is disturbed. One site had air that exceeded the safety limit for a total of 36 days in mid-August through early November. On one day in September 2020, the PM10 reading topped 480 — over three times the EPA standard.

"The San Joaquin Air Pollution District has a very hands-off approach in how it chooses to regulate agricultural sources," says Brent Newell, senior attorney focused on food and farming at Public Justice, a national legal advocacy organization that works on civil rights and environmental justice. "When it does, the regulations are milquetoast." For example, to comply with the rule, Regulation VIII, adopted in 1993, which governed directly emitted PM10 particles from agricultural operations and roads, farmers were only required to check boxes on a menu of actions that were basically what they were already doing, such as water or oil down roads or reduce the speed limit, says Newell.

Paul Cort, an attorney with Earthjustice who unsuccessfully challenged the agricultural dust control measures in the San Joaquin Valley in 2009, agrees. "To the extent any regulation has occurred, it's been done in a way that is super flexible to the point of being almost toothless," he says. If it's dust, he says, the odds are good that it's coming from agriculture.

"No one is arguing it comes from construction or road dust or from some other source," says Cort. What's more, there's little public concern about PM10, which is often seen as simply airborne soil, and part and parcel of farming communities. "There's some public perception that that's not the pollution we need to be worried about. [That] it's just dirt," he says.

But soil degradation is becoming a chronic problem, says Kelly. He argues that the amount of dust in the atmosphere offers a way to take the pulse of ecosystems. "What's happening now is we're getting much larger events, not only in terms of the wind speeds, but over much larger geographic areas," he says. And, he adds, it will take decades for the soils to recover from the ongoing drought.

Kelly suggests that a large-scale, multi-agency effort — one that combines satellite imagery, climate models, historical data, and new sensors is needed to identify the most vulnerable landscapes — and potentially stop farming them, at least for the time being.  "We need to get to the point where we can identify these areas and say we cannot put these lands into production because they are too risky," he says.