Robots are coming for the elderly — and that's a good thing 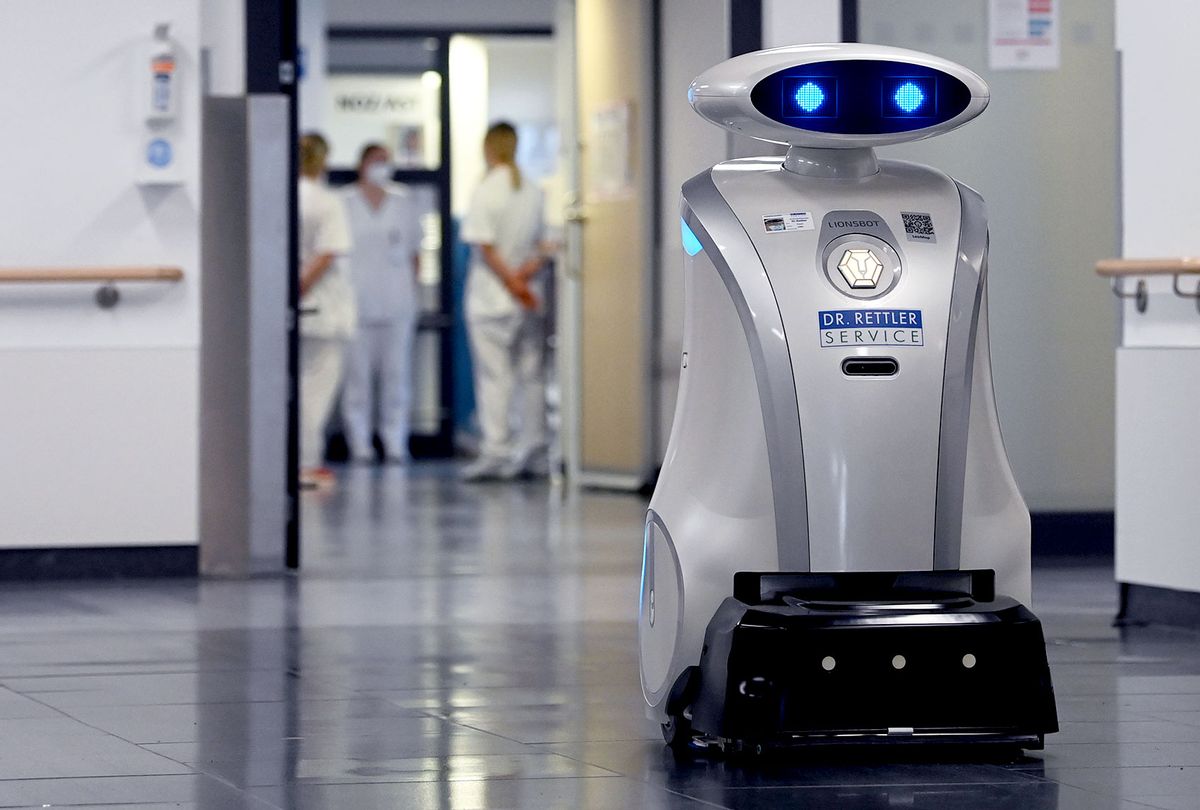 Cleaning robot 'Franzi' cleans in the entrance area of a hospital in Munich Neuperlach, southern Germany, on February 12, 2021. - Cleaning robot Franzi always makes sure the floors are spotless at the Munich hospital where she works, but she has also taken on a new role in the pandemic: cheering up patients and staff. (CHRISTOF STACHE/AFP via Getty Images)
--

Every time someone mentions robots, I think of my grandmother.

At 93, she was almost completely blind, in a wheelchair, and living in a nursing home. She was wheeled each morning into a room where a volunteer read the local newspaper. On my rare visits (I lived several states away), it was not uncommon for me to enter that room and find all the residents sleeping. Slumped in their wheelchairs, most looked as if they were barely clinging to life. Others looked at me with dazed glances but said nothing.

I'd meet my grandmother's blue eyes — now washed a peculiar white — and feel her stare right through me until I said, "Grandma?"

"Mitchy-motch," she'd reply with a smile, awakened from the half-slumber of the forgotten.

"Let's get you out of here," I'd say. Wheeling her outside in a plant-filled courtyard, we talked about the books she'd been listening to, and I caught her up on my life.

At the end of my grandmother's life five years ago, she was one of the 15% of older adults who lived in a long-term care facility for more than two years. She was overwhelmed by physical ailments that plagued her for more than 10 years. And yet, when I visited her, it was her extreme isolation that was most upsetting. Annual staff turnover in nursing home aides is 59%, and median survival of residents is about two years. My grandmother's longevity turned out to be her curse: as a decade-long resident of a care facility, she outlived everyone she'd ever met there. Her loneliness was palpable.

But my grandmother was not alone in this condition. Millions of people are lonely worldwide (e.g., one study reports prevalence rates of 22% in the US, 23% in the UK, and 9% in Japan), and loneliness has a profound, negative effect on mental and physical health. And the population with the greatest risk of loneliness? The elderly. During COVID, loneliness may have meant the difference between life and death for elderly patients. In one study of elderly patients admitted to the ICU, those who were most socially isolated had a 119% greater chance of death.

But one solution for my grandmother and millions of other lonely people may be counterintuitive on its face: robots and artificial intelligence. These technologies have certainly garnered a lot of scrutiny, and many are concerned that a robot workforce is bound to replace humans in many industries. But focusing on the potential downsides of these innovations makes us overlook the promise of robots as social beings, life facilitators, and trusted companions.

Though once clunky and awkward, AI technology has reached the point where robots (e.g., Moxie) and chatbots (e.g., Replika) are learning and mimicking humans, mirroring speech patterns and remembering likes and dislikes. More and more, they are being built to be socially responsive, rather than apathetic and "robotic" like the chatbot technology often encountered on customer service lines. Tech companies are also putting efforts into anthropomorphism — making robots look and move like humans — which, when combined with advanced AI, is making "robot friends" a real possibility.

Although my recent research has shown that interactions with AI are not viewed as socially beneficial as those with humans (even when those human interactions are via text message), people emerge from them with positive emotions. Importantly, we humans also have fewer negative emotions and presentation concerns (e.g., fear of negative evaluation) when interacting with robots than when interacting with other humans. This gives hope. Combined efforts from tech companies, psychologists, and human-computer interaction specialists are creating the promise of companions for people who have none.

Will we see this in our lifetimes? I think so, and it's coming sooner than you think.

Three years ago, I was lucky enough to meet the world's first robot citizen — Hanson Robotics' Sophia. She was charming and coy, with a rich knowledge base and refined manners. And she was stunning. Most importantly, when she looked at me, I believed there was a "she" looking at me. Although little more than a collection of complex algorithms, Sophia was an entity of her own.

The day I met her was an awakening for me. I've developed an entirely different view of both robots' future and my own. If I make it to 79, the average life expectancy for a woman in the U.S., then I'm already past the halfway point of my life right now. I feel great, but every day my cells are dying, and regeneration is at a slower pace. Eventually, cells won't be replaced at all. In the developmental psychology classes I teach, I talk about different theories of aging. Regardless of mechanism, they all conclude with the same ending: my body will deteriorate, and I will die.

When I met Sophia, I felt an incredible sense of hope. My grandma could have used a companion like her. Sophia could have told my grandma about current events beyond her small town. Though poor in physical health, my grandmother was rich in wisdom, retaining most of her cognitive faculties until the day she died. But for most of the end of her life, she was utterly and completely alone, her only source of pleasure and stimulation listening to the books on tape my aunt got her from the local library.

As I look to my own future, I expect that I, like my grandma, might need some help with the activities of daily living. Or maybe my needs will be more social. Someone to talk to. Someone who will like me and remember me. Someone who will support my mental and physical health. Someone who will wheel me around a courtyard and talk to me about the books I'm reading. And when that day comes, whether my companion is truly human or simply seems to be may not matter much at all.

Michelle Drouin is a behavioral scientist and author of "OUT OF TOUCH: How to Survive an Intimacy Famine" (MIT Press).