We talked to Patti Davis and Andrew K. Budson about their respective new books on caregiving and dementia 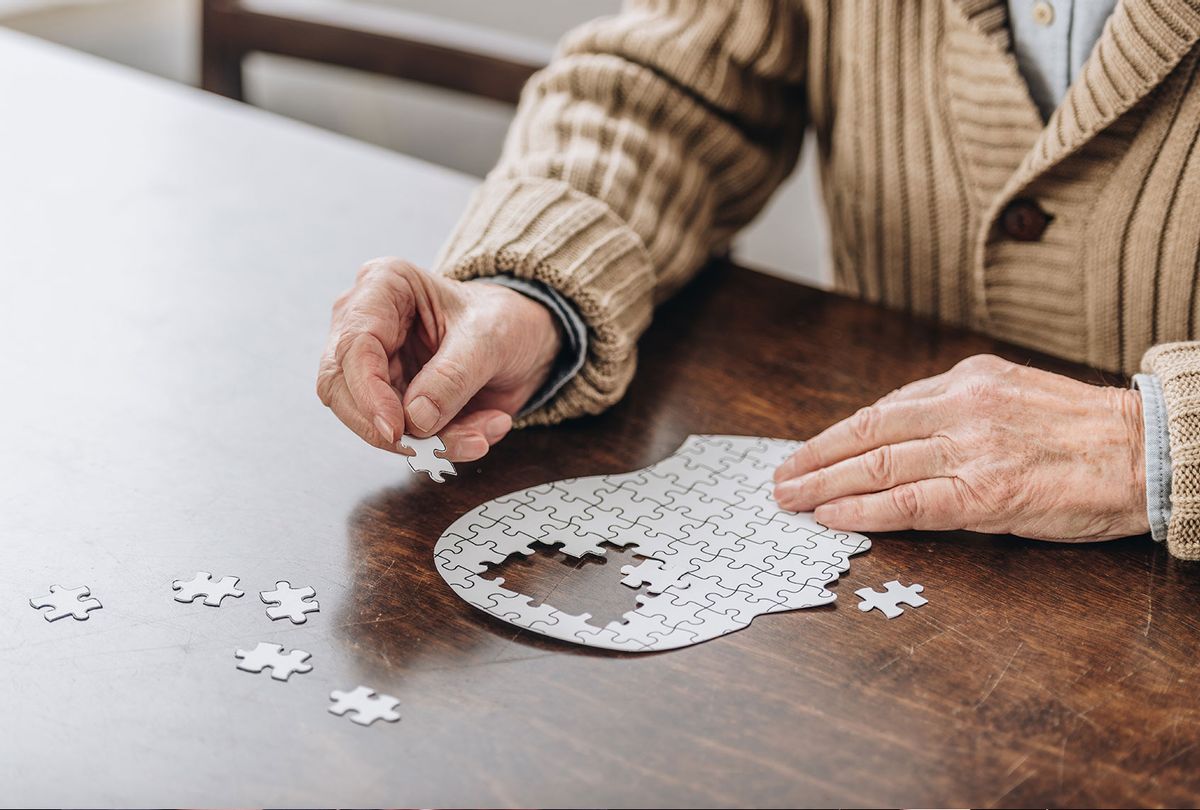 My mom and my mother-in-law have never had much in common. Indeed, my relationships with both of them have been vastly different. Yet, somehow, they find themselves now in nearly identical plights: deeply withdrawn into the dark, frightening worlds of their own respective dementias.

In a relatively short span of time, I've watched them both transform into nearly unrecognizable versions of their former selves. It is not a gentle or a peaceful experience. In observing these joint crises, there is much I didn't know — or never even thought about — before I had to. Yes, there are emotional things, the grief before the grief. But also the practical things, the "You don't remember how to brush your teeth?"-type things.

The Alzheimer's Association estimates that more than 11 million Americans are caregiving for someone with Alzheimer's or dementia. It can be an incredibly lonely, overwhelming and confusing experience. So I got some help.

I have read an awful lot on this subject, and the two best books of their kind happen to have both come out in the past month. Andrew E. Budson and Maureen K. O'Connor's "Six Steps to Managing Alzheimer's Disease and Dementia: A Guide for Families" offers practical, refreshingly plainspoken information on helping your loved one — and yourself — through through the process. And author Patti Davis's "Floating in the Deep End" is a frank, judgment-free account of how she got through her father Ronald Reagan's illness, and the wisdom she's acquired from experience and her support group, Beyond Alzheimer's. Both books left me tearful with recognition and gratitude, fortified with acceptance and the permission to let go of unconstructive guilt. I can't say enough how simultaneously informative and consoling both books are.

Facing this absolute bastard of a condition has to start, first and foremost, with challenging the stigmas of our youth-oriented, individualistic culture.

"We as a society need to work on normalizing the conversation as people are getting older, about the fact that at some point, everyone is going to need help with managing some of their affairs, whether we're talking about helping with their finances, helping to make sure medications are administered correctly or helping with things like bathing and toileting," says Andrew E. Budson, chief of cognitive & behavioral neurology at the Veterans Affairs Boston Healthcare System. "Everyone is going to need help at some time in their life with those things, and I think we need to feel comfortable introducing those topics."

Meanwhile, in our more immediate day-to-day relationships, we all need to get good at recognizing the signs of Alzheimer's and dementia — especially in these isolation-accelerated times. "Anybody can be halfway through telling a story to a good friend and say, 'Oh my God, I told you this already, didn't I?," says Budson. "But if one notices a pattern of an individual frequently repeating the same questions, the same stories, over and over and over again, that really is not normal. That's a pretty good red flag."

Budson adds that another red flag is "if the person is having a lot more trouble than they normally would doing the same types of tasks."

Those kinds of symptoms may seem well-known, but there are others that are sneakier, that disguise themselves as something else.

"We see a lot of patients in our clinic who have just been told, 'Mrs. Jones, you're just suffering from depression,'" says Budson. "The fact of the matter is, Mrs. Jones really is depressed, but Mrs. Jones is depressed because, number one, she is terrified that she's developing Alzheimer's. Number two, the actual pathologic process of Alzheimer's disease does affect the neurotransmitters in the brain that lead to depression. So Mrs. Jones has depression, but it's not that the depression is causing the Alzheimer's, it's really the other way around." And when you learn your loved one isn't just being forgetful or sad, as Patti Davis writes in her book, hang on.

"It's scary," Davis says during a recent early morning phone call from her home in California. "It's scary to go through grief. It's scary to surrender yourself to it, and we don't want to do it. So we find all sorts of ways to avoid that." Davis understands that paradoxically, it's that fear that can lead us — as adult children, spouses and friends — to take on too much, to avoid getting the help we need. But managing care is not a simple case of familial reciprocity. It is instead, as Davis puts it in her book, more like "childproofing on steroids."

"Right out of the gate, you have to point out the absurdity of comparing a parent taking care of a child to an adult taking care of an 85-year-old. It is not the same," says Davis. She cites, for example, how "it commonly comes up around the issue of bathing." It's exactly the sort of thing you can't fully grasp until one day your spouse uses the word "harrowing" to describe the ordeal of giving his mother a bath.

Davis says, "While I understand that there are some situations where there is no choice, often there is a choice. There are a lot of reasons that people take on that intimate task, but I think it's just too emotionally difficult and too emotionally fraught. That's where people usually reach for some kind of defensive reason, like, 'Well, she bathed me as a child.' Bathing a child is a completely different thing than bathing an elderly person, particularly your parent. First of all, just dealing with your parents' naked body is emotionally loaded, no matter what your relationship with them was. It uses up a lot of your emotional resources. That's actually why I think people do it, because instinctively, we know that if we're using up all our emotions on something like that, we're not going to have enough left to take care of our own grief."

"We're very clever at running away from grief," she says. "I've heard it in general care issues — 'They cared for me when I was a child, so I have to sacrifice my entire life to take care of them.' There are some situations where it's just unavoidable. There's no money, there's no opportunity, no financial room to have anybody help you out. I do get that, but there's respite care that's available sometimes. So I think usually it's something else is being played out there."

In her book, Davis advocates for keeping a sense a humor, and writes compassionately about the challenges of taking away a parent's car keys and discovering that "lying is your friend" when "the truth isn't going to be soothing." Budson concurs.

"It's not helpful to continually tell your loved one that they have Alzheimer's or that they have dementia. It's not helpful to argue with them if they have a false memory or are having a hallucination," he says. "We typically want to respond in the same way that we always have done for thirty years, maybe sixty years. When any really form of dementia hits, caregivers just can't use the same approach, the same language, the same tone that they otherwise would have."

This is deep, deep work for all parties here, to learn a new way of communicating.

"We wanted to try to help people understand at an emotional level," says Budson, "that you really have to have a different mindset. You can't continue to think about the person as your mother in exactly the same way you used to, or think of the person as your spouse in exactly the same way that you used to. It's difficult because it can be frustrating for anybody if they ask you the same question thirty times in two hours. It's particularly difficult when in order to answer a different way, you have to come to the emotional realization that the person that has been your partner or someone that you've looked up to for many years, that they're just not the same person they used to be."

That also requires examining honestly what that prior relationship was, and acknowledging the complicated dynamics that will still come into play as you manage care. As Davis says, "The thing about Alzheimer's or any kind of dementia is that it brings up everything. It brings up everything in families. It brings up everything in you, the things that you thought you resolved in therapy ten years ago. Guess what? Maybe not completely, because here they are again. One of the most powerful lessons that this disease taught me, was to grow up and be an adult and accept that my family was what it was, and then go, 'Okay, now, where do I go from here?'"

Acceptance is tough. But a new relationship is not the same as a nonexistent one. A person with a cognitive issue is still a human being, and there may yet be unexpected experiences of connection to be found. The last conversation I had with my mother was probably the sweetest one we've had in decades. It reminded me of the interview I had last year with "On Vanishing" author Lynn Casteel Harper, who said hopefully, "I think a gentler world is possible."

"If you are sitting there with an attitude of, 'This person's not here anymore,' you're going to miss those really precious moments and very illuminating moments," says Patti Davis. "I always feel, 'don't say that,' because then that's going to become your reality and you're going to miss what you can learn from this disease and how you can grow from it. You're not going to be there for them in the ways that they need you to be there for them, because you just decided they're not there." Instead, "You have to be really on the alert," she says, "for those moments where there's some clarity and there's an aperture, a little opening that you can see through the disease — and past the disease."

As hard as it is to look at the older women in my life and not fear my own future, Alzheimer's and dementia are not inevitable. Science is still investigating the root causes — and potential treatments.

"It's a huge misconception that many people think that's just what happens," says Budson. "We now recognize that people can be living healthy with very good cognition — maybe not quite as good as when they were in their middle ages — but with very good cognition up into their eighties and nineties. Most of the time, when people are having significant problems with thinking and memory, it's because some type of disease process, sometimes reversible, sometimes not, has come about."

I am still figuring out new things every day with my mother and my mother-in-law, still searching for moments of grace when they appear, and letting go of a tremendous amount. "One of my mantras became, 'I don't know,'" says Davis. "I don't know what my father is going to be like today when I go visit him. I don't know what's going to happen tomorrow. I don't know what's going to happen next week. We like to map things out and everybody likes to be in control, but I think to have that openness of recognizing that this disease is in control. You have to plan ahead. But I think there's a balance there of doing that, but also deep inside yourself going, 'I have no idea.'"