Heeding the lessons of James Joyce's "Ulysses," a century later

Joyce's great novel, 100 years later, warns us off nationalism and idolatry, brings us together in life and death 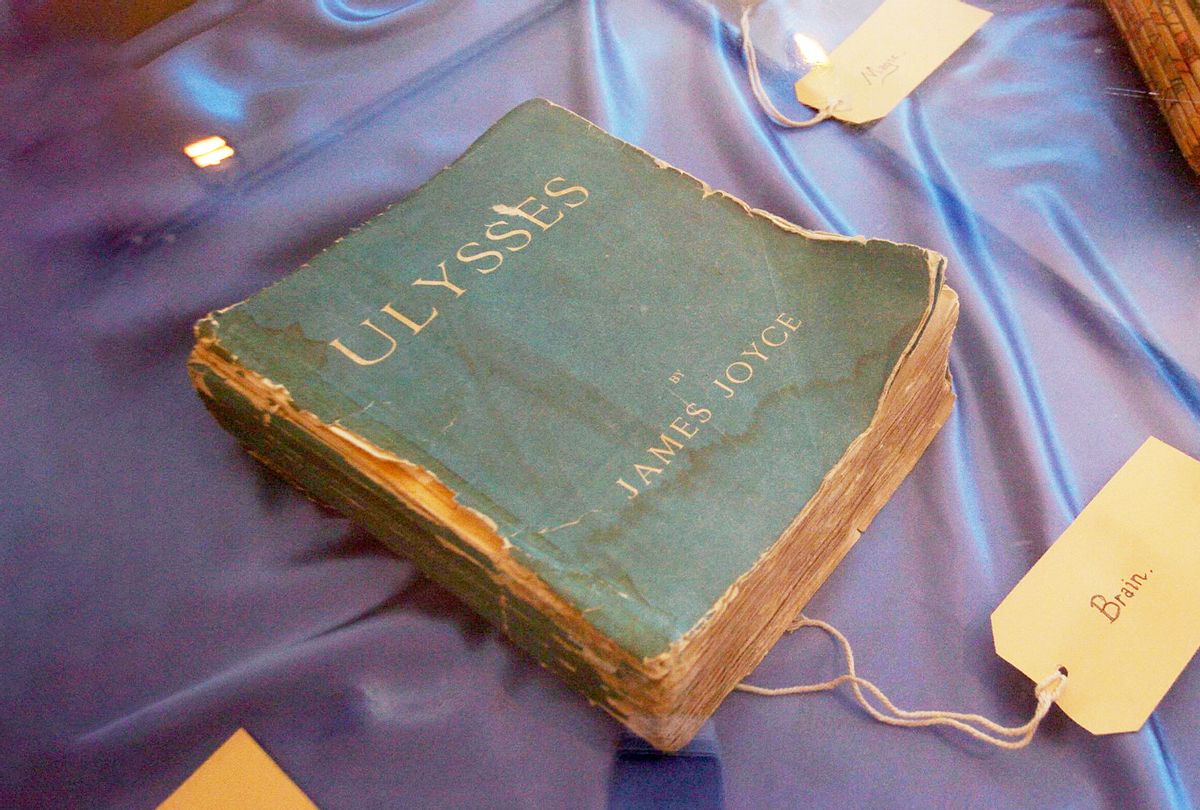 An early edition of one of Dublin's most famous literary masterpieces 'Ulysses' by Irishman James Joyce is pictured 15 May 2004 in the James Joyce Centre in Dublin. (FRAN CAFFREY/AFP via Getty Images)
--

One hundred years ago this week, Sylvia Beach, who ran the bookstore Shakespeare and Company at 12 rue de l'Odéon in Paris and nurtured a community of expatriate writers that included Richard Wright, T.S. Eliot, D.H. Lawrence, Thornton Wilder, Ezra Pound, F. Scott Fitzgerald and Ernest Hemingway, placed in the bookstore's front window a 732-page novel she had published, "Ulysses" by James Joyce.

"Ulysses" had been rejected by numerous publishers in English speaking countries. The book, which was banned in the United States and Great Britain because of its "obscenity" until the 1930s, takes place during a single day in Dublin, June 16, 1904. It would swiftly become one of the most important novels of the 20th century, drawing its inspiration from Homer's "The Odyssey." "Ulysses," which I have read three times, accompanied by a book of annotations by Don Gifford to catch the literary and historical references, is timeless. It captures the dazed, unresolved wanderings all of us take between birth and death, calling us to a life of compassion and understanding, and cautioning us to eschew the seductive calls to trample over others to worship idols.

The mythical figures in Homer's epic — Ulysses is the Latin name for Homer's hero Odysseus — are reincarnated in the lives of the Irish working class. Ulysses, the Greek king of Ithaca, whose ruse of the Trojan Horse made him the architect of the victory against Troy, who spent 10 years trying to get home after 10 years at war and slaughtered the suitors who besieged his wife and ravaged his court during his absence, becomes in Joyce's hands Leopold Bloom, a 38-year-old ad canvasser for the nationalist newspaper Freeman's Journal. Leopold, whose father was an observant Hungarian Jew, throughout the novel mourns his infant son Rudy, who died more than a decade earlier, a loss that severed his sexual relations with his wife Molly. Ulysses' son Telemachus, who grew up without his father and who, when he reached manhood, left Ithaca to search for Ulysses, becomes Stephen Dedalus, a fictionalized version of Joyce's precocious younger self. Penelope, the loyal wife of Ulysses, is reinvented as Molly, the wife of Leopold Bloom, who during the day has a tryst with her lover, Hugh "Blazes" Boylan, and whose approximately 22,000-word monologue, one of the greatest in literature, affirming the sanctity of love and life — along with graphic descriptions of digestion, orgasms and farts — concludes the book.

RELATED: "The Most Dangerous Book": When "Ulysses" was obscene

"Unimpressive as Bloom may seem in so many ways," writes Joyce's biographer Richard Ellmann, "unworthy to catch marlin or countesses with Hemingway's characters, or to sop up guilt with Faulkner's, or to sit on committees with C.P. Snow's, Bloom is a humble vessel elected to bear and transmit unimpeached the best qualities of the mind. Joyce's discovery, so humanistic that he would have been embarrassed to disclose it out of context, was that the ordinary is the extraordinary."

"To come to this conclusion Joyce had to see joined what others had held separate: the point of view that life is unspeakable and to be exposed, and the point of view that it is ineffable and to be distilled," Ellman continued. "Nature may be a horrible document, or a secret revelation; all may be resolvable into brute body, or into mind and mental components. Joyce lived between the antipodes and above them: his brutes show a marvelous capacity for brooding, his pure minds find bodies remorselessly stuck to them. To read Joyce is to see reality rendered without the simplification of conventional divisions."

Joyce, who wrote much of the book in Zurich during the suicidal slaughter of World War I, as well as the doomed Easter Rebellion against the British occupiers of Ireland in April 1916, detested the intoxicating poison of nationalism and seduction of violence. He watched as European intellectuals, artists and writers, including those in Ireland, descended into the moral squalor of jingoistic cant to support military adventurism. The flip side of nationalism is always racism, the exaltation of the self, the tribe, the nation, the race above the other, who is debased and dehumanized as unworthy of life. To Joyce this was a sacrilege.

In Joyce's wartime satirical poem "Dooleysprudence," he speaks in the voice of Martin J. Dooley, a literary personage invented by Finley Peter Dunne. Dooley in the poem ridicules those around him gripped by war fever:

Who is the tranquil gentleman who won't salute the State
Or serve Nebuchadnezzar or proletariat
But thinks that every son of man has quite enough to do
To paddle down the stream of life his personal canoe?

Leopold Bloom is a pacifist, as was Joyce, a vehicle in the book used to ridicule all ardent nationalists, including Irish nationalists, who, to Joyce, resemble Homer's idiotic one-eyed Cyclops, in the novel's chapter called "The Citizen."

"They believe in rod, the scourger almighty, creator of hell upon earth and in Jacky Tar," The Citizen says of the hated British, "the son of a gun, who was conceived of unholy boast, born of the fighting navy, suffered under rump and dozen, was sacrificed, flayed and curried, yelled like bloody hell, the third day he arose again from the bed, steered into heaven, sitteth on his beamend till further orders whence he shall come to drudge for a living and be paid."

"But," says Bloom, "isn't discipline the same everywhere? I mean wouldn't it be the same here if you put force against force?"

By imagination Ellmann means the capacity to see ourselves in the other, especially the stranger, the outcast. Leopold Bloom endures subtle slights and virulent anti-Semitism during the day, even though he has forsaken his father's religion, his mother was a Catholic and he relishes pork kidneys. "Ulysses" constantly juxtaposes characters who have the capacity for remorse and compassion, like Leopold, with characters who do not, such as Buck Mulligan, who refers to Stephen's mother as "beastly dead," and Simon Dedalus, the estranged father of Stephen Dedalus, who mistreated his late wife and their children.

For Joyce the language we use to know ourselves, whether in official pronouncements, mass culture or the press, which he calls "dead noise," fragments reality into small digestible bits, sound bites highlighting the trivial, the mythic or the extraordinary. This rhetoric and language obfuscate rather than elucidate. It is a linguistic trick to perpetuate the potent fictions we tell ourselves about ourselves, as individuals and as a nation. In the name of fact and objectivity, it distorts and lies. Joyce also excoriates the religious and political leaders tasked with addressing the needs of the Irish in the figures of Father John Conmee and the British Viceroy. The radical disconnectedness of those in power from the lives and concerns of the public expose the bankruptcy of their pretensions. Order and purpose, Joyce argues, come from the intimate social bonds we knit with those around us. We are our brother's and sister's keepers.

Stephen rejects journalism for literature. But Stephen — read Joyce — also knows that literature can drown itself in platonic idealism, sentimentality and nostalgia. Joyce was an enemy of the Irish Literary Revival, which he excoriated as pretentious self-absorption and self-exaltation in the name of the authentic. We find ourselves, Joyce knew, in the chaotic sights, sounds, slang and messiness of contemporary life. Joyce boasted that if Dublin was ever destroyed it could be reconstructed from his novel.

Stephen's, and by extension Joyce's, lodestar is William Shakespeare, who, of course, was English rather than Irish. Shakespeare inhabited, like Joyce, the world around him and used that raw material to explore the rhythms of human nature and human society, its mix of good and evil, selfishness and altruism, capacity for heroism and deceit, ability to love and hate, often all rolled into one contradictory human being. Stephen, for this reason, broods at length in the novel about Hamlet.

Joyce was ruthlessly honest about human foibles and human proclivities. But his novel is a cri de coeur for our common humanity. He elevates those dismissed, as William Butler Yeats wrote, by "the noisy set of bankers, schoolmasters, and clergymen the martyrs call the world" to heroic status. He makes those forgotten by history worthy of our admiration and respect.

On Wednesday, Feb. 2, which was Joyce's birthday and the day Beach handed him the first printed copy of his book, with its blue cover and white lettering, in 1922, I will walk the few blocks from my house in Princeton to the cemetery where Beach is buried to say thank you.

More from Chris Hedges on the state of America: