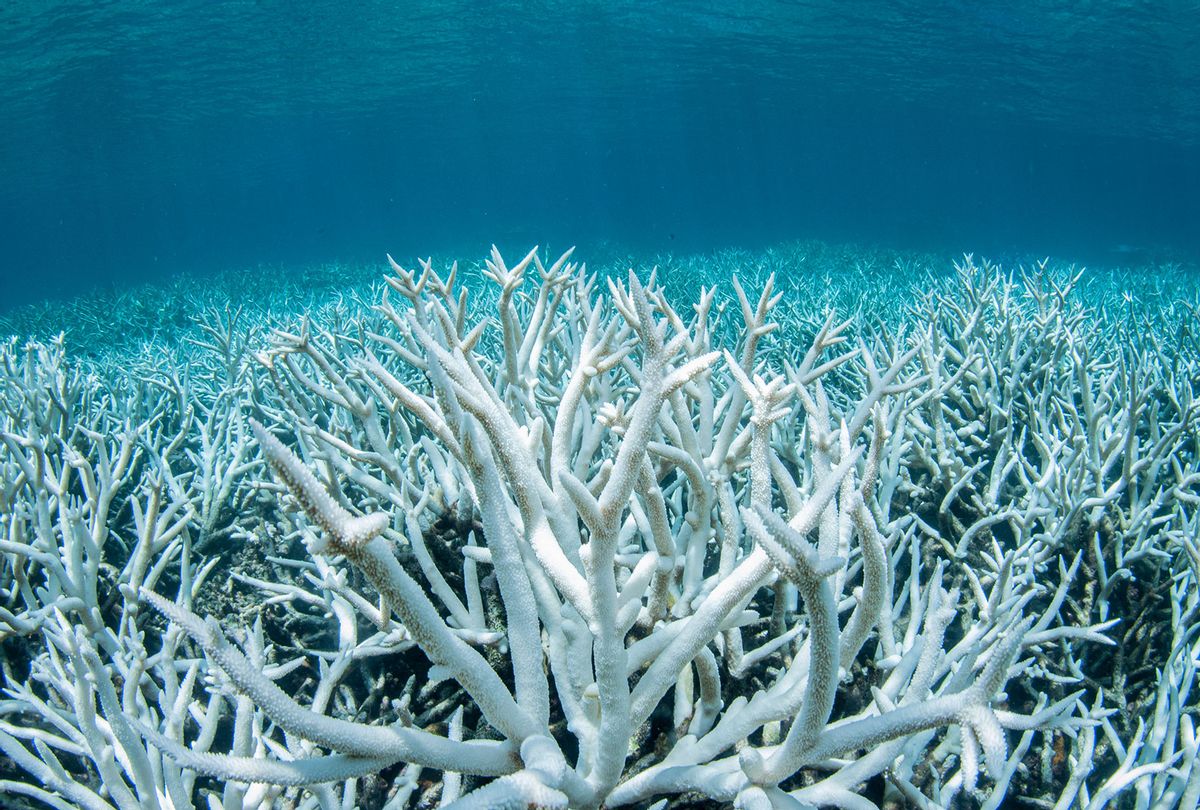 Following the hottest December on record over the Great Barrier Reef, U.S. government scientists predict the world's largest coral reef system could experience a mass coral bleaching event later in the southern hemisphere's summer. Such an incident would be catastrophic to the fragile marine habitat, which thus far has survived five mass bleaching events — three in the last seven years alone.

If extensive damage occurs as a result of high temperatures leading into the bleaching season, 2022 would become the second year with mass bleaching during La Niña. National Oceanic and Atmospheric Administration research scientists, in a report awaiting peer review before publication in Faculty 1000, raises alarm bells about the potential impact of the extreme heat wave. Associated monsoonal conditions of La Niña years of the El Niño-Southern Oscillation would typically create a cooling effect over the southern Pacific, including the 135,000 square mile reef system.

Coral bleaching is a process that occurs when coral, stressed by changing water temperatures, expel the algae from their porous tissues and turn bone-white. Though coral bleaching does not immediately kill corals, they become far more susceptible to disease and death after bleaching events. Because coral reefs are some of the most biodiverse ecosystems in the ocean, bleaching events threaten vast numbers of aquatic species; though coral reefs make up a tiny percentage of the ocean by area, 25 percent of marine life relies on coral reefs to survive.

"At this point in time, it's not clear if it's gonna be a localized minor event or if it could get worse," Dr. Manzella said.

There is bleaching on the Great Barrier Reef right now, but it is currently limited to the far northern part, a relatively small portion of the reef according to Dr. Manzella. In a Jan. 28 update, Chief Scientist of the Great Barrier Reef Park Authority Dr. David Wachenfeld coral bleaching across the park has been limited. He also emphasized that reported bleaching so far has not been severe.

"Not surprisingly we have seen growing reports of coral bleaching from different parts of the park, but I want to stress that all of these are low-impact bleaching at this stage, which is good news," he said.

Coral bleaching itself is not uncommon, nor is it necessarily deadly for coral. Environmental stress causes the coral to expel or break down symbiotic algae, dinoflagellate. Under normal circumstances, the algae give the coral its color, nutrients, and disease resistance in exchange for a habitat. This mutually beneficial relationship dissolves under the stress of extreme heat, which leads to toxicity for coral as a result of overactive photosynthesis on the part of the algae. Although corals can recover from bleaching, extreme or prolonged environmental stress will cause the death of corals, which depends on the symbiosis with algae to sustain themselves.

"The trend we're seeing nowadays is that heat stress events, marine heat waves, are becoming greater in magnitude in terms of how hot it is — is the thermal anomaly one degree, two degree, three degree — the magnitude is increasing with heat waves and as is the duration of the heat wave," Manzella noted.

Even if this year does not result in a mass bleaching event on the Great Barrier Reef, successive bleaching events weaken the viability of reef systems to recover, and these are likely to continue to be more prevalent as the Pacific Ocean continues to warm.

RELATED: How the U.S. Navy is killing the world's whales

On the scale of an entire reef system, coral bleaching poses not only a threat of widespread coral mortality but also to the ability of the coral to effectively regenerate.

"The real issue, globally — not just for the Great Barrier Reef — for every coral on the planet is when we start piling on these heat stress events, you end up killing off all the sensitive corals," he said. "Then it becomes death by a thousand cuts for the corals that are able to recover because, even though they can hang on there and survive a bleaching event, they have to deal with disease and they're not growing fast enough, they're not reproducing and making babies. Then it's basically survival; it's hanging-on-for-dear-life survival."

According to the Park Authority, further bleaching is expected given forecasts from NOAA and the Australian Bureau of Meteorology that warmer than average temperatures will prevail into February.

"Obviously that is of concern, but this is balanced by the forecast from the bureau that there will be tropical monsoonal activity strengthening and widespread rain over many parts of northern Australia in the coming weeks," Wachenfeld said. "This will also come with the development of several tropical lows over northern Australia and obviously the cloud and the rain and the wind associated with these systems will bring a cooling effect to the great barrier reef."