So what was Trump's plan after seizing the voting machines?

If Trump, Sidney Powell and Michael Flynn had a plan, it was to sow unbelievable chaos. And it might have worked 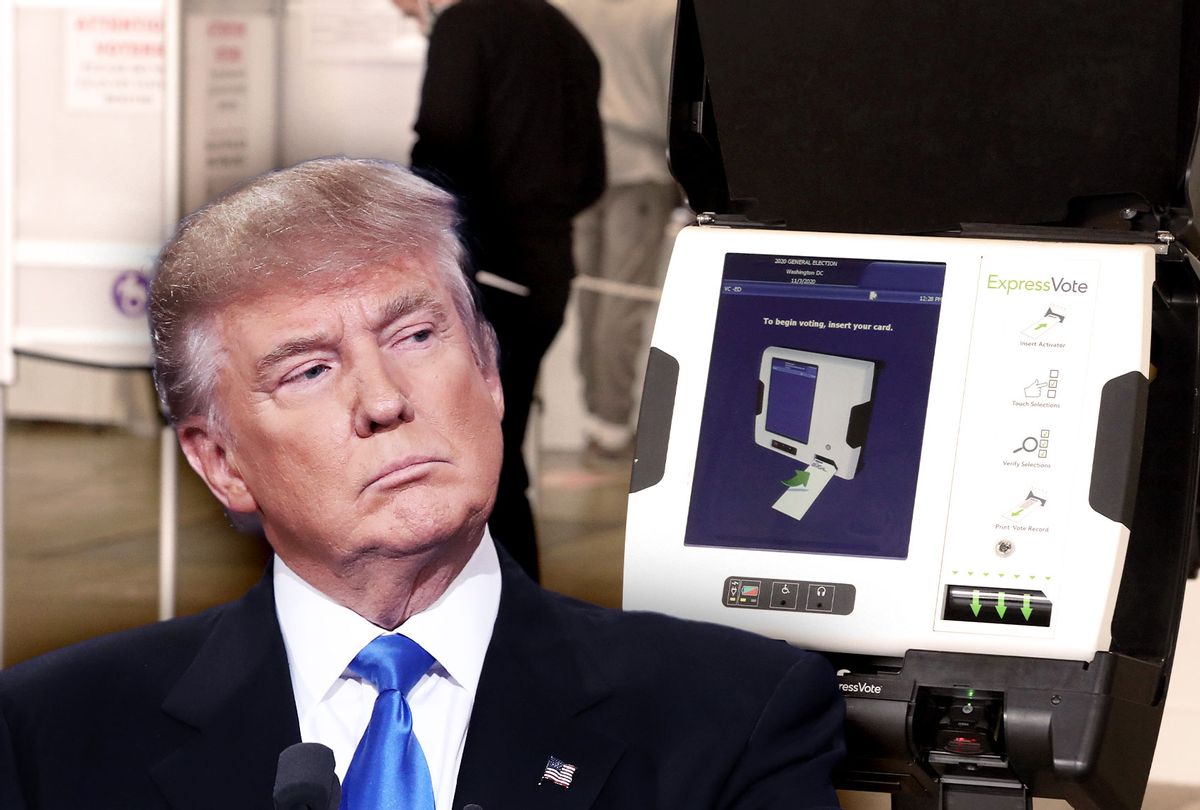 The big news this week wasn't really news at all, but rather confirmation of what we already knew. After a rally of supporters last Saturday in Conroe, Texas, the former president admitted for the first time that his goal was to have his Vice President, Mike Pence, "overturn the election."

Well, whoop-de-do. Pundits call that "saying the quiet part out loud," one of those phrases that is so meaningless it should be put in a bottle, sent out on the Japanese current and retired forever. There was never a "quiet part" with Donald Trump. He came right out and told you what he was doing nearly every day. Once he woke up on the morning of Nov. 4, 2020, all he did was try to overturn the election. He claimed repeatedly that he had "won by a landslide" even after election results came in showing him losing by more than 7 million votes overall, and by 74 votes in the Electoral College.

If anything could be said to have been real news this week it was that reports surfaced that Trump had tried repeatedly to find some arm of his government that would seize voting machines in battleground states for him. The New York Times headlined it this way: "Trump Had Role in Weighing Proposals to Seize Voting Machines." All you had to do was read to the end of the first sentence in the story to see how completely the headline understated what really happened. "Six weeks after Election Day, with his hold on power slipping, President Donald J. Trump directed his lawyer, Rudolph W. Giuliani, to make a remarkable call." Get that? He directed his law-poodle Giuliani to call another one of his poodles in the Department of Homeland Security and see if that department would be willing to go out there into the battleground states and seize voting machines. The Times goes on to report that he had considered and rejected having the Department of Defense do his dirty work for him, and he had previously asked his supreme law-poodle, William Barr, his attorney general, to have the Department of Justice send its agents into the field and pick up the voting machines.

Trump was doing this in December of 2020, having lost one lawsuit after another trying to challenge the results of the election in every single battleground state he had lost. He was desperate. People like Michael Flynn, his disgraced former national security adviser, and Sidney Powell, the lawyer who filed several of the lawsuits he had already lost, had gotten through to him in the Oval Office. They were pitching wild theories that the Chinese Communist Party had manipulated the vote by hacking into voting machines, and former Venezuelan President Hugo Chávez, who had died in 2013, and lefty bogeyman George Soros were somehow manipulating the software of Dominion Voting Machines on behalf of Joe Biden.

Voilà! There it was right in front of them! It was those damn voting machines! All they had to do was get their hands on those voting machines in three "key states" and … well … what was the plan, exactly?

That's the "quiet part" all the reporting this week leaves out. Two of the plans reached the stage of draft executive orders for Trump to sign. Both would have ordered some federal department — Trump apparently didn't care which — to seize the machines. After that the executive orders, and the reporting about them, peter out.

While we know what he wanted to do, we don't know what his plans were from that point on. But there have been a few hints. The Times reported on Wednesday that Patrick Byrne, the former CEO of Overstock.com, was in the Dec. 18 meeting in the Oval Office when Flynn and Powell pitched the idea of having the Department of Defense use soldiers to seize the voting machines. Byrne had funded multiple lawsuits on Trump's behalf challenging the election results. In a book he published last year, Byrne wrote, "We pointed out that, it being Dec. 18, if he signed the paperwork we had brought with us, we could have the first stage (recounting the Problematic 6 counties) finished by Christmas." Byrne was apparently referring to "portions of contested swing states that Mr. Trump had lost," the Times reported. The plan also included a proposal that Trump appoint Sidney Powell (!) as "a special counsel overseeing election integrity," according to the Times.

So there's at least a scrap of a plan. The Powell-Flynn-Byrne team thought that it would take only seven days to get a recount done in six large counties of multiple states Trump had lost.

We now know, by the six months it took the Cyber Ninjas to recount the vote in Maricopa County, Arizona, that this was a wildly optimistic estimate. We also know the results of that particular recount didn't exactly come out the way Trump and his people expected they would. Biden's win in Arizona was confirmed by the "forensic audit," with an additional 300 votes awarded him.

We also know by the example of the last special counsel assigned to investigate an election — Robert Mueller's investigation of the 2016 presidential election – that months would have gone by before any proposed team led by Powell or anyone else would be able to issue any kind of report on "election integrity."

So we know that part of the plan wouldn't have worked in a way that would have benefited the struggling president at all. One deadline had already passed: Electors in all 50 states and the District of Columbia had met on Dec. 14, cast their ballots and forwarded their "Certificates of Ascertainment" to the vice president and the archivist of the National Archives. So that was over and done.

The next deadline was, of course, Jan. 6, when a joint session of Congress was to meet and count and certify the electoral ballots and determine the winner of the election.

Aha! Maybe that was the plan! Let's see if we can do a little mind reading. Say, as Flynn et. al. proposed, a bunch of soldiers had shown up with trucks in six counties in three or four states and driven away with thousands of voting machines and taken them God Only Knows Where, to do God Only Knows What with them. What do you figure would happen?

First there would be the coverage of what could only be described as raids on state and county election offices and storage facilities. Those images would fill the news for days. Then there would doubtlessly be a battle, as happened months later in Arizona, over whether the news media would be allowed into whatever enormous facility had been rented for the purpose of storing the voting machines, at least initially, and then "analyzing and assessing" the vote, as was called for in the proposed executive order. There would be multiple jurisdictions of authority involved, all the way from county voting commissioners through the secretaries of state to the governors of those states, representatives of both parties and of the Trump and Biden campaigns, all the way to law enforcement officials from each state, probably including the attorneys general and state police commanders…

Are you getting the picture? Does the word clusterfuck come to mind?

And of course there would be leaks to the media, lots and lots of leaks from every rotting timber of this listing vessel, alleging all manner of corrupt practices, skullduggery, attempts to influence the count — if in fact a count could even get underway — and accusations by both campaigns and both political parties that the other was attempting to "fix" or "rig" the outcome of whatever the hell was going on.

Christmas would come and go, leaving just 11 or 12 days until Jan. 6 (depending on whether Christmas Day would be taken as a holiday and work suspended) when the joint session of Congress was scheduled to meet — a deadline set not by political parties or campaigns, but by federal law.

What do you figure would happen on that day if thousands of voting machines had been seized by the military and taken away somewhere and some kind of "recount" was taking place being managed by … well, by whom, anyway?

And if all of that should come to pass, well, you know as well as I do what the outcome of a vote in the House would be: Trump would be declared the victor and he would remain in office.

So maybe that was the plan all along: chaos. Does chaos sound like it would appeal to anyone you know?

My goodness, it's beginning to look like we escaped that one by the proverbial hairs on our chinny-chin-chin, doesn't it?