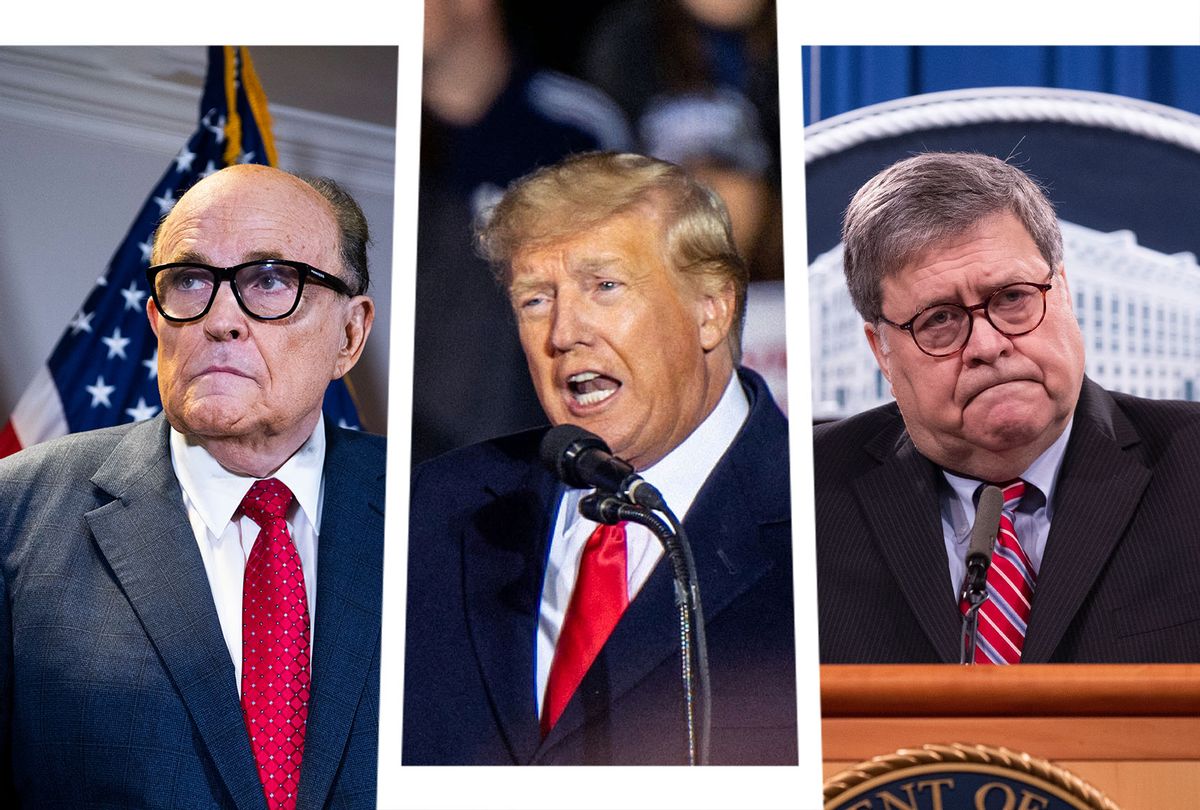 Late Monday, more horrible-but-not-surprising information about Donald Trump's attempted coup leaked out, this time through the New York Times, in a story that seems sourced heavily through Trump allies who are trying to shift some of the heat off themselves onto their boss. Trump, the Times reports, had a direct hand in efforts to seize voting machines in swing states. It was under the guise of stopping "fraud," but obviously the purpose was destroying votes for Joe Biden before they could be counted. Specifically, Trump ordered his lawyer, Rudy Giuliani, to call the Department of Homeland Security and ask to "take control of voting machines in key swing states." This matters, as the reporters write, because it shows Trump "was more directly involved than previously known" in this plot to seize voting machines.

Maggie Haberman, one of the Times' reporters, elaborated on Twitter, noting that "Trump allies have repeatedly painted him as essentially giving a hearing to but not really heeding some of the suggestions." In reality, as this report shows, it was the opposite: Trump was the one pressuring his lackeys to take action to steal the election, not the other way around. This, as she noted in another tweet, destroys claims that Trump was merely "a passive observer" of his own coup.

But even though this reporting shows Trump trying to mastermind a plan to steal the election from Biden, it also illustrates how focused Trump was on insulating himself from legal consequences.

Every step of the way, Trump tried to get someone else to actually pick up the phone and make the call to break the law. He didn't have the nerve to call Homeland Security himself, so instead he got Giuliani to do it. He also brought then-Attorney General Bill Barr into the Oval Office and "raised the possibility" of seizing machines, clearly hoping Barr would take a hint and do his dirty work for him.

What Trump was doing isn't mysterious. By leaning on underlings and insinuating orders rather than giving them directly, he's setting his people up to take the fall if things go sideways. It's a strategy that Trump has used his whole life to great effect. As his former lawyer/fixer Michael Cohen explained in his 2019 testimony before the House, Trump "doesn't give orders. He speaks in code." He lets his wishes be known and hopes that his minions take the hint. That way, if the law starts sniffing around, Trump can play innocent and pretend that his flunkies were self-directed. That is one reason why, for instance, Cohen went to prison for the Stormy Daniels pay-off scheme and Trump avoided legal jeopardy.

RELATED: Trump's trapped in his own bunker of fear — with his fan base of right wing cowards

As Henry Farrell of the Washington Post wrote, it's "the way that Mafiosi speak to each other, to avoid trouble." It's how the entire Ukrainian blackmail scheme Trump got impeached over was conducted. Trump never came out and told the Ukrainian president that he was expected to make false accusations to smear Biden, or Trump would cut off military aid. It was much more of the "nice country you got there, shame if something would happen to it"-style of communication.

Crucially, this latest story is a reminder of what a sniveling coward Trump is. He wants everyone else to take the risks for him, while he reaps all the rewards. This was most obvious on the day of the Capitol insurrection.

Trump promised his riled-up supporters that "I'll be there with you" when they marched on the Capitol. But, the weenie that he is, he did no such thing. Instead, he sat in the safety of the White House, watching the insurrection gleefully on TV and egging on the rioters with his Twitter account. Now they're all going to jail and he's walking around free, making mostly empty promises of future pardons.

Ultimately, Trump's gutlessness worked against him in pulling off his coup. His tendency to insinuate his wishes rather than issue direct orders may shield him from accountability, but it also gives the people he's leaning on an excuse to act like they don't know what he's asking of them.

For instance, one of Trump's more direct actions during the attempted coup was to call Georgia's secretary of state, Brad Raffensperger, and ask him to "to find 11,780 votes." He continued with this passive mobster talk throughout the call, saying, "So what are we going to do here, folks? I only need 11,000 votes. Fellas, I need 11,000 votes. Give me a break." Obviously, what Trump was doing was instructing Raffensperger to falsify these votes to steal the election. But Trump didn't come right out and say it, so Raffensperger was able to play dumb throughout the call, brushing off Trump's insinuated demands.

Trump's scheme to steal voting machines appears to run against the same problem. He wouldn't come right out and tell anyone to seize the machines and destroy votes, and instead hid behind lackeys and insinuations about "fraud." The result was that it was much easier for the federal officials he was leaning on to blow him off. He kept running against people who weren't interested in sticking their own necks out to steal the election for him, and why should they? He didn't even have the guts to ask them directly to do so.

Unfortunately, we can't count on Trump's cowardice to save us from his next coup, which is already in the works.

The last coup was chaotic and fast-moving, and largely centered on a handful of Trump stooges pressuring people who weren't in on the conspiracy, weren't stoked about taking the big legal risks being asked of them, or, in some cases, seemed genuinely confused about what they were being asked to do. In the past year, however, the entire Republican Party has had the time and mental space to figure out what, exactly, Trump is envisioning with all the hints he was dropping. And they've largely fallen in line, with state officials across the country piecing together plans to make Trump's vision of a stolen election easier to pull off. He won't be so hobbled by his lily-livered inability to give a direct order next time, because, frankly, he won't have to. Unlike last time, most of the GOP knows what is expected of them, and they have the luxury of time to pull it off.

Trump's gutlessness may have kept him from stealing the election, but it probably also helped him stay out of prison. And as long as he's a free man, he will be able to try again — and this time, with an army of people who are ready to take the risks for him.