Sorry, Susan Collins, Trump learned nothing from impeachment: He's doing it again, except it's even more dangerous 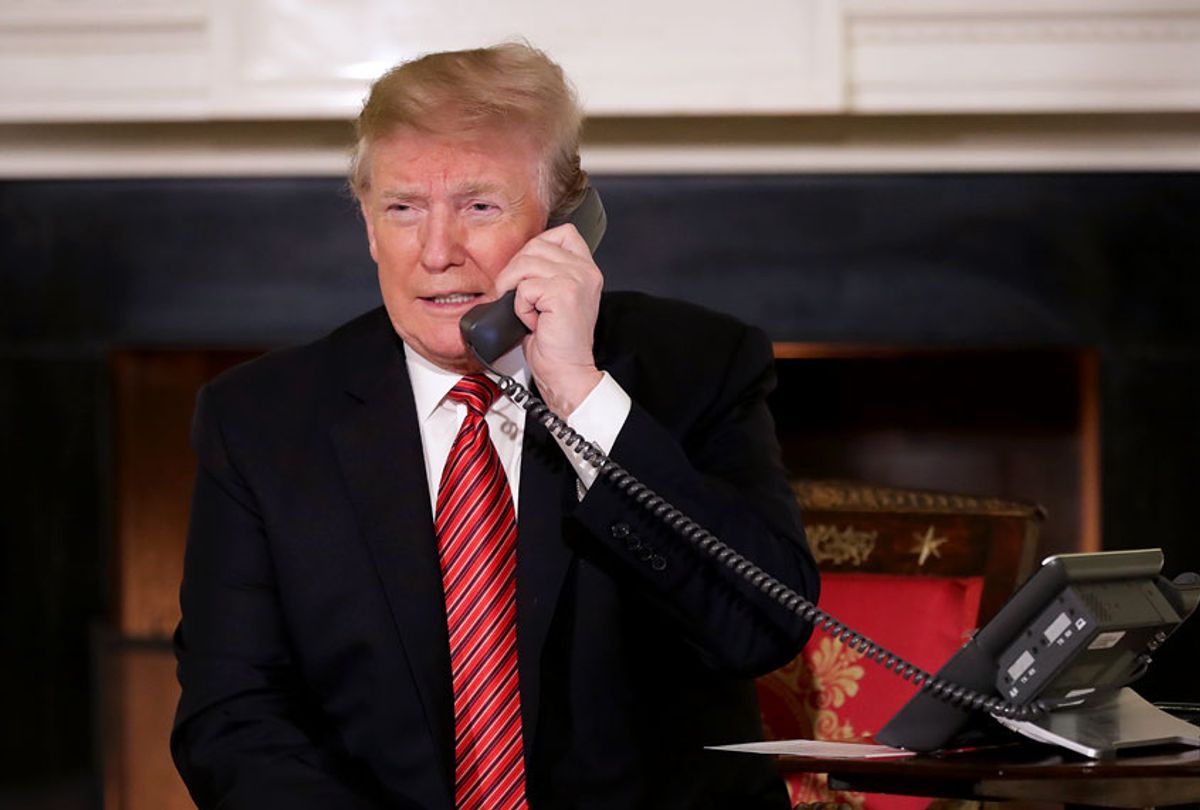 One of the most soul-taxing aspects of the Donald Trump era is how much it's like living in a political version of "Groundhog Day." We endure variations of the same handful of scandals over and over again until we're numb and unable to tell what happened one day from the next. The result is a weird time dilation, where the past year feels like a dozen as if everything is happening both quickly and slowly all at once.

So it's probably no surprise that few pundits seem to have noticed how Trump's call to Georgia's Secretary of State Brad Raffensperger demanding that he steal Georgia's election by falsifying votes is a direct sequel to the scheme that got Trump impeached. And like most sequels, this one attempted to be bigger and bolder — but only ended up being sloppier and more confusing.

Impeachment was a year ago, which is many eons in Trump Standard Time, so a quick recap of what Trump did to get impeached: He called the newly elected president of Ukraine, Volodymyr Zelensky, and demanded that Zelensky abuse his powers to help Trump cheat in the American election. Trump wanted Zelensky to announce an "investigation" into Joe Biden, hoping to bolster a disproved conspiracy theory about Biden, and threatened to withdraw military aid to Ukraine if Zelensky didn't give in to his demands.

Further investigation by various House committees turned up evidence of an expansive conspiracy, run by Trump and his lawyer, Rudy Giuliani, aimed at manufacturing evidence for these lies about Biden. But it was the leaked phone call to Zelensky that broke open the whole thing. Here was the president of the United States using threats to blackmail a foreign leader into abusing his power, all to cheat in the 2020 election.

It's almost eerie how identical this latest extortion scheme aimed at Raffensperger is: A leaked phone call, the president demanding that a government official abuse his power or even commit crimes to help Trump stay in office and threatening that the leader does as he's told or else. Trump then unloads a series of preposterous conspiracy theories on the exasperated official, laying out his disingenuous excuses for why cheating and criming is justified.

In this case, the situation is even worse than Trump's plot against Zelensky. What Trump was asking of Zelensky was help in falsifying evidence for lies Trump thought would help him demonize Biden in the press. What he's asking of Raffensperger is an outright crime: To "find" (read: falsify) 11,000 votes for Trump. Not only is this illegal, it's almost certainly undoable — there's no mechanism for Raffensperger to generate such "votes," and especially not one that would shield Raffensperger from getting caught.

That Trump is resorting to the same trick — using threats to pressure government officials to abuse their power and/or commit crimes for him — should be no surprise. Trump portrays himself as a master negotiator, but in reality, extortion is the only strategy he has. Just last month, Trump was using the same extortion tactic against Senate Majority Leader Mitch McConnell, threatening to tank the coronavirus relief bill if McConnell didn't find some way to steal the election for Trump. In October, Trump was pulling the same trick on his FBI director, Christopher Wray, threatening to fire Wray unless Wray manufactured evidence for an anti-Biden conspiracy theory. This pattern goes all the way back to Trump's first days in office, when he extorted then-FBI director James Comey, demanding Comey disappear an investigation into the Trump campaign's collusion with a Russian conspiracy.

Trump is a one-trick pony, and he's not even good at that trick.

Most of these extortion schemes fail spectacularly. Comey got fired, but he did not break the law to shut down the Russia investigation. Wray did not give into Trump's demands and continues to hold his job. McConnell did not — could not, really — steal the election for Trump. And, of course, Zelensky did not announce phony investigations into Biden, if only because Trump's scheme was exposed before Zelensky had to give in to the threats.

Trump's extortion conspiracies are bad at getting him what he wants, but they are still incredibly dangerous. As Heather "Digby" Parton argued at Salon, "Trump is fomenting tremendous anger among his followers that may very well boil over." Plus, Trump's coup effort is now being backed by up to 140 House Republicans and 12 in the Senate.

Despite the claim from Maine's Republican Sen. Susan Collins that Trump "learned" a "pretty big lesson" from impeachment, what Trump clearly learned is that he can commit bigger crimes and make even more overt efforts to steal an election. Worse, he learned that Republicans will support his efforts. He's going to keep it up once he's out of office, seeking ways to abuse power to cheat in the 2024 election that he clearly intends to run in. And Republicans will continue to be empowered by Trump's blatant criminality, backing increasingly aggressive efforts to destroy American democracy.

The whole situation is a reminder that Trump not only intends to continue committing crimes in his endless quest for power but that he's escalating and Republicans will never step in. The only thing that can stop him is a full-throated federal prosecution for his many crimes, committed both in office and during his cheating-centric 2016 presidential run. Just as Democrats were forced, reluctantly in many cases, to impeach Trump for running an extortion scheme to cheat in the 2020 election, Biden's Department of Justice must do everything they can to hold Trump accountable, including prosecuting crimes committed during this latest attempt to steal the 2020 election.

Prosecuting Trump is the only way to stop this. It goes against Biden's every instinct, of course. Biden wants to make nice with Republicans and views unleashing the Department of Justice to deal with Trump's many crimes as unpleasantly political. But there simply is no choice if democracy is to be saved. Trump has shown he will keep going unless stopped.