GOP Groundhog Day: Why do we keep electing Republicans? They're no good at this

If you're starting to get that special "George W. Bush feeling," you're not alone. Will America learn its lesson? 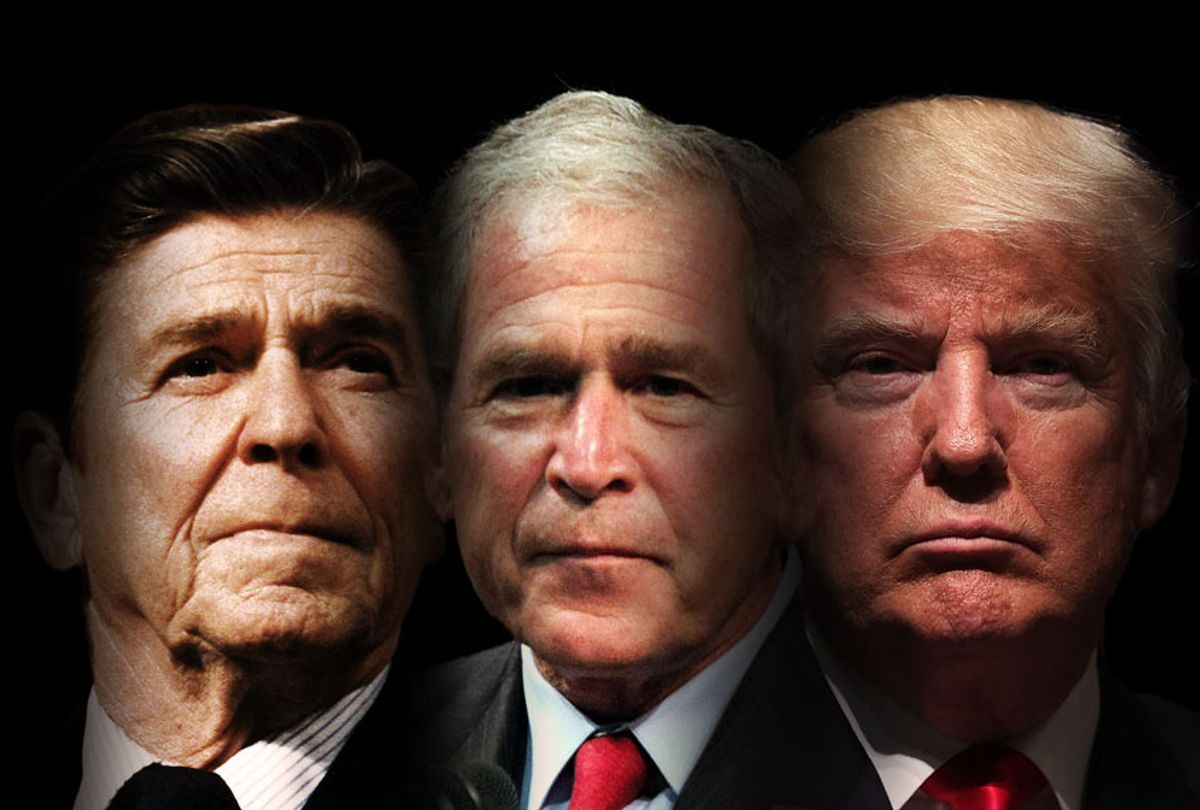 If the slow-on-the-uptake response to COVID-19 by the White House seems a little familiar to you, you're definitely not imagining it. As if we're caught in some sort of "Groundhog Day" loop in the time-space continuum, we've absolutely been here before. Cue "I Got You Babe" on the alarm clock.

I realize too many Americans have gnat-like attention spans and even shorter memories, so I'll be specific. Beyond several details, the Trump presidency is looking an awful lot like the second term of the George W. Bush presidency. To his credit, Mike Pence hasn't shot anyone in the face, but we're seeing a traffic jam of similar events: a crisis with a growing death toll, a painfully tone-deaf, slow and inept government response, a financial meltdown and an out-of-control budget deficit. (Trump promised to eliminate the deficit.) Only now, it's all happening at the same time.

The Republican-led geyser of insanity that landed in our laps between 2005 and 2009 is back for an encore, and it's horrifying.

Do we see a pattern here yet?

We'd have to be blind not to. For reasons that will forever confound historians, 62 million Americans, many of whom were still tangled in the nets of the previous Republican catastrophes, decided it'd be a great idea to "own the libs" by giving the Republican Party another chance at running the federal government, not to mention Congress. This time, however, they landed on a candidate with zero experience, zero aptitude for government work, zero regard for anything other than his own popularity and, as a bonus, a history of personal financial disasters including bankrupted casinos, a fraudulent university and an even more fraudulent charitable foundation.

Trump voters justified this choice by suggesting that an obnoxious, undisciplined "businessman" who sold steaks in Sharper Image mall stores was fully qualified to run the world's most powerful government (which isn't at all like a business). This was like shoving a carnie who runs the Tilt-a-Whirl into the cockpit of a Space-X rocket. Maybe he'll stir things up, they thought, choosing to experiment with the presidency by handing an erratic weirdo the nuclear codes. What could possibly go wrong? For starters, the rocket is nosediving, and we're all passengers, including the voters who put us here.

We tried to warn the Red Hats. We tried to remind them what happened the last time around. But rather than employing basic common sense or, at the very least, a Google search for what went down during the previous, slightly less moronic Republican administration, they decided to jam their faces into the GOP propeller blades once again, and here we are. Ned "The Head" Ryerson should be along any second now, refusing to abide social distancing.

Whether it was refusing to acknowledge the onset of the virus or closing down the pandemic response unit a couple of years ago, the Trump White House bungled this from the beginning, likely worsening the death toll and precipitating the collapse of the financial markets. Meanwhile, Trump's tax cuts ended up benefiting Trump's wealthy Mar-a-Lago guests far more than the "forgotten" men and women of America — and there was no way to pay for them, adding still more billions to the deficit. We've also seen this dynamic play out at the state level, for example with former Kansas Gov. Sam Brownback and his tax cut "experiment," which nearly bankrupted the state rather than creating the explosive economic growth he promised.

Say what you will about the Democratic Party, but history has illustrated that Democratic presidents are infinitely better at governing than any recent Republican. I mean, it's shocking that the party that wants to drown government in the bathtub doesn't know how to govern, nor is interested in learning. But notice how Trump and Bush each eagerly embraced "big government" when their asses and legacies were on the line.

Trump arrived in Washington believing he could tweet, blurt foul nicknames and show off his executive orders like a big boy, and everything would work out great. It turns out that being president requires more vision, discipline and actual knowledge than he thought, and that's just the very basic skill set.

Much to Trump's surprise, when the disasters stacked up, he couldn't bullshit his way through like he's done so many times before. If it weren't for his life support system at Fox News Channel, not to mention his loyalists on Capitol Hill, Trump would've been forced to resign after Charlottesville — if he had even been elected in the first place, which would have been doubtful without the late Roger Ailes, Mitch McConnell and, yes, Vladimir Putin. They'll all try like hell now, but I wonder whether they can put President Humpty back together again.

During his inaugural address, Trump referred to the Obama years as "American carnage," and promised to make America great again. It turns out, a "no drama" competent family man who kicked off the heretofore longest economic expansion in history wasn't anything close to being American carnage — that was another Trump lie, eagerly swallowed by his own people. It turns out that while there's always room for improvement, economic growth, job creation and other indicators were equal to or more robust during the so-called "carnage" under Obama.

Indeed, carnage is what we're seeing now as we wake up to our shocking new normal for the foreseeable future. But even before the COVID-19 crisis, even before the financial crisis, there was the "Trump Crisis" — the daily institution-crushing mayhem erupting from Trump's phone, from federal investigators and from the fast-moving process of turning the executive branch into a subsidiary of the Trump Organization. It was only a matter of time before Trump's flimsy, brittle presidency, built on make-believe and held together with masking tape and spit by Fox News, fell apart. Sadly, we're all getting hit by the debris from the crash.

This November, and probably four years after that, I suspect millions of Americans will make the same dumb error in judgment all over again, voting for this incapable poseur despite the madness, even while they themselves are impacted more than most by Trump's amateurish blundering. And the endless loop will continue: A Republican president craps his cage, a Democrat cleans up the mess, short-attention-span voters elect another Republican, and we repeat.

The only way to break this cycle is to take a step back, turn off the Fox News fairy tales about big hands and perfect hair, and reprioritize the question of who ought to be leading the country. As we covered last week, those leaders should never again be slack-jawed morons you hypothetically want to "have a beer with," and they definitely shouldn't be loudmouth wannabe mobsters turned game-show hosts. We're dangerously close to fighting the next pandemic with Brawndo unless this ridiculousness is finally shocked out of our system.