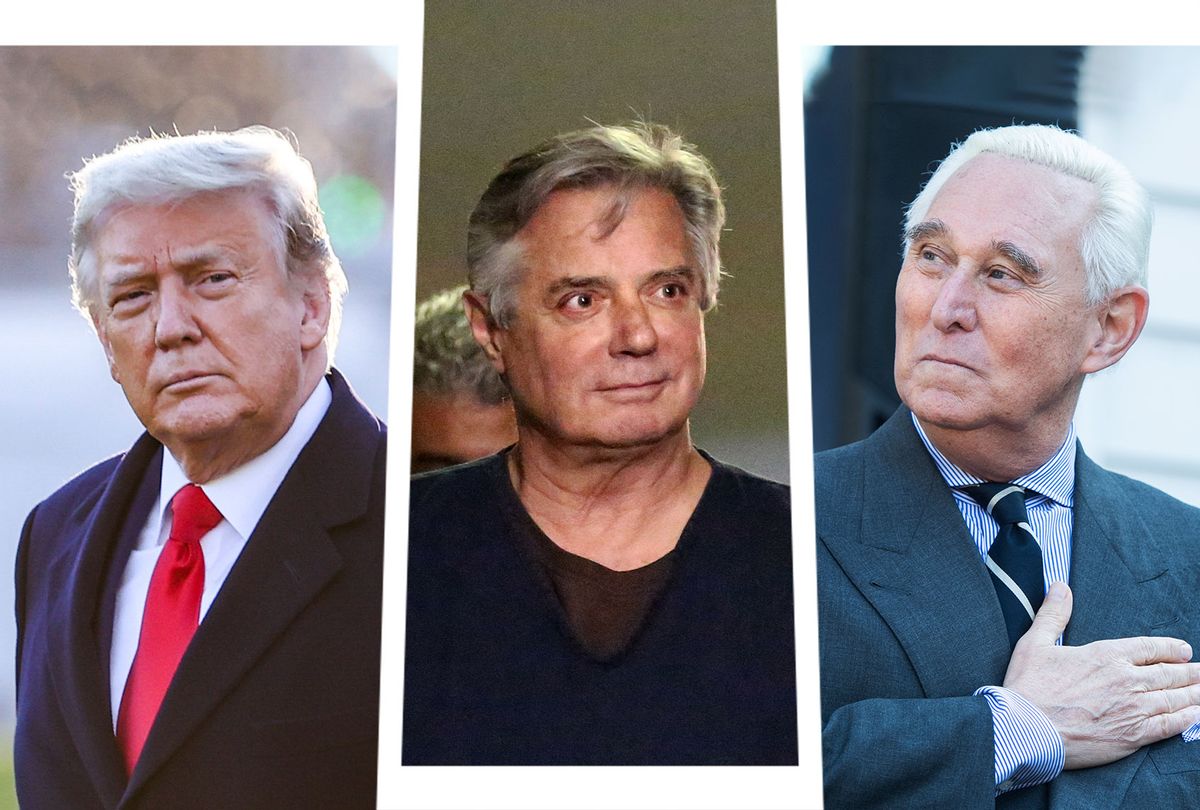 No one should be surprised that Donald Trump is on a pardon spree for some of the most notorious crooks in politics. You have the men that were convicted for their role in colluding with Russia's version of the Watergate conspiracy to hack Democratic emails during the 2016 election, such as Trump campaign manager Paul Manafort and Trumpian gadfly Roger Stone. You have former congressional GOP scumbags Chris Collins, Duncan Hunter, and Steve Stockman, all convicted for financial crimes like insider trading stealing from campaign donors and stealing from charity. You have Jared Kushner's father, Charles Kushner, who was sent to the clinker for tax evasion. And for good measure, Trump also sprung some outright murderers, mercenaries who worked for Blackwater, which is run by Trump's buddy, Erik Prince. These men were convicted for their role in an outright massacre of Iraqi civilians, including a 9-year-old boy.

No one is surprised. Indeed, social media is currently duking it out over the trophy for Least Surprised. But it is this very lack of surprise that underlines why Trump's pardon spree is a problem. As we were repeatedly warned would happen when Trump took office, Trump is normalizing corruption — at least on the Republican side. All of which just makes it all the more urgent for the Department of Justice, when Joe Biden takes office, to ignore all calls to let bygones be bygones, and instead investigate and prosecute Trump to the fullest extent of the law. Forget all the claims that doing so is a threat to "national unity." Failure to hold Trump to account is the true threat to national unity.

After all, the standard Trump is attempting to set with his actions — where Republicans can break any law that they want without facing consequences — is a standard tearing this country apart. That's a literal double standard, where the Democrats are expected to obey laws and respect the rules, but the Republicans can do whatever they want, no matter how illegal. That is why, despite reports that he "just wants to move on," Biden can't move past Trump's crimes.

By not prosecuting Trump, Biden's administration would be consenting to this double standard. And there is no way to that we can have healing and unity in a country where half the country's elected representatives have no rules or boundaries on their behavior, while the other side is expected to act like a bunch of Boy Scouts. That is a prescription for increasing acrimony, as the Republican side will continue to transgress and the Democratic side will continue to boil with resentment at this wild and unfair double standard. The only way for a people to be unified is for all people to have to live under the same set of rules and expectations.

And make no mistake, this is a double standard. No one should doubt that Democrats will continue to be expected to obey the law — and if they transgress, both Republican and Democratic administrations will come down on them like a sack of hammers. Republicans have no restraint going after Democrats, even though their "investigations" usually turn up nothing of note. But Democrats tend to show no hesitation in holding other Democrats accountable, as well, because it's widely believed that it looks bad to do what Trump is doing, which is to give license to fellow partisans who break the law.

Look, for instance, how Hillary Clinton was treated during Barack Obama's presidency — even though, unlike Trump and his cronies, she didn't commit any crimes or transgress ethical norms. Nonetheless, Clinton was buried under Republican-led congressional investigations, often spurred on by incomprehensible right wing conspiracy theories like Benghazi. Her entire email history was investigated and investigated again by the FBI, and the FBI head, James Comey, even broke with FBI protocol to make a big public stink over the investigations.

The result of all this investigating was bupkis, of course, but tellingly, Obama himself didn't get involved in any way. Not just because staying out of it was the right thing to do (arguably, it wasn't, since let's face it, she was being persecuted unfairly in many instances), but also because Obama understood that it would be scandalous for a Democratic president to interfere in any way with an investigation. Clinton's own public behavior suggested she had the same belief, and she cooperated with investigations not just because she knew she was innocent, but because showing even the tiniest fraction of the same resistance Trump has shown throughout his presidency would have been a massive scandal.

A country divided in this way cannot stand. The only way to rectify Trump undoing justice in this way is for Trump himself to face justice. If he doesn't, and Biden prevents investigations in the name of "healing" and "unity", it will only send a message to the already wildly corrupt GOP: Do what you want. No one will ever stop you. Rules are only for Democrats.

Letting Trump's crimes and cover-ups slide hurts the body politic in another way: It will increase cynicism and distrust in politics. Gallup polling in 2015 showed that three-quarters of Americans already believed corruption was widespread in government. Heaven only knows how much worse it's gotten under Trump, who manifested this belief into reality.

Indeed, it's because so many Americans are skeptical of government that Trump got as far as he did. Not because, as many pundits naively thought, Trump voters believed his promise to "drain the swamp." No, it's because the belief that all politicians are corrupt allowed Trump voters to feel justified in their desire to vote for a shameless criminal, a man who literally bragged on the campaign trail that tax evasion makes him "smart" and who loved talking at length about how he cheats the system.

If something isn't done to counter the levels of corruption Trump has introduced into politics, expect a thousand more Trumps to flourish, brought to office by voters who figure all politicians are corrupt, so they might as well vote for the one who is the most flagrant about it. Corruption isn't stopped by speeches. Even noble bills that introduce stronger rules don't matter, if the norm in D.C. is that the rules are never enforced on Republicans. The only thing that can end corruption is consequences.

Trump understands this, which is why he's stripping consequences away for all the people who committed crimes for him, or even just crimes he likes. The only way to keep Republicans from going buck wild with the financial crimes and campaign cheating is to see Trump himself prosecuted. Trump and his cronies need to taste justice for there to be any hope of fixing what's so broken in this country.