Trump's loss was radicalizing: His promise to "cheat" the system has further deluded his fans 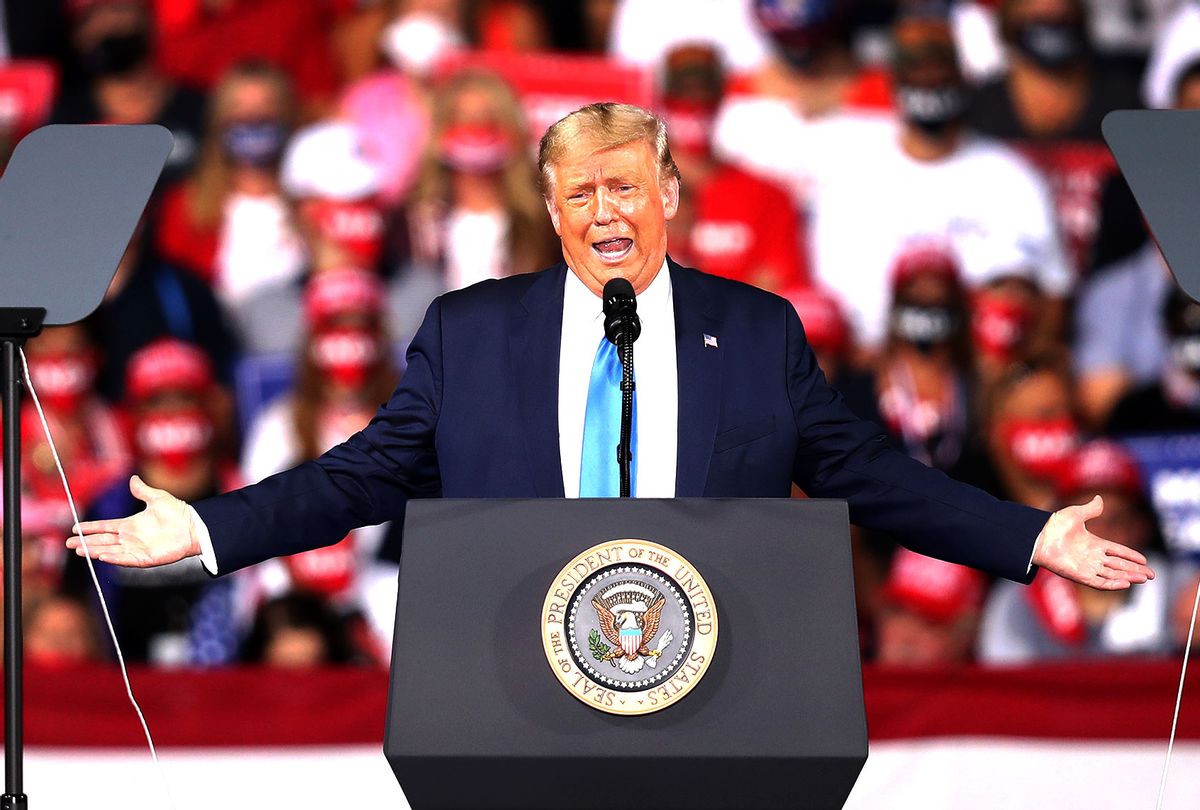 For years, many liberals have been confused by why so many Donald Trump voters seem unperturbed by all his criming and cheating. To understand Trump's supporters, it's important to understand that they don't believe he's a good person. On the contrary, the appeal of Trump from the beginning was a belief that he's a liar, a cheat, and a crook — but one who would implement his evil-doing skills towards goals Republican voters support, with triggering the liberals and snagging all the government goodies for their tribe at the expense of other Americans at the top of the list.

This wasn't exactly subtle. Trump repeatedly promised his supporters during the 2016 campaign that "Nobody knows the system better than I do." He often bragged about his supposed skills at buying off and working politicians.

The key is realizing that the typical Trump supporter, as I explained in the Standing Room Only newsletter, sees himself as in on the con. Indeed, the easiest way to hoodwink someone is to convince them that they're part of the conspiracy, that they're the ones getting one over on someone else. Trump's story for his supporters was that all of politics is a rigged game, but this time he was rigging it for them.

All of which explains why Trump supporters, like their idol, are losing their minds right now. They elected a man who assured them he knew all the tricks and could get away with breaking any rule. But despite all his efforts at stealing the election from Joe Biden — and all the money he's raised from them to do so — Trump is failing. Trump's voters never believed he was an honest man, yet they got snookered by the biggest lie of all: that he had almost god-like powers to cheat the system.

The result is a nationwide tantrum from Trump's devout followers, who are raging incoherently at every opportunity, stunned and mentally wrecked by the revelation that Trump does not, in fact, have some secret plan to undo the election he lost.

On Monday, state legislators in Oregon got together to discuss proposals to mitigate the economic damage from the coronavirus pandemic, a session that was closed to the public for health reasons. But outside, an armed and delusional crowd of Trump supporters — about 300 in number — gathered, screaming conspiracy theories about a "stolen" election that Trump has floated to justify his attempted coup. They also denounced restrictions on public gatherings and mask requirements that have been passed to curb the pandemic.

The protesters weren't allowed in the capitol building so they decided to storm the place with guns. They were met with state troopers in riot gear, but the troopers were understandably spooked and hesitant at times since they were dealing with an armed mob in thrall to dangerous delusions.

To make it worse, inside the capitol building, some Republican legislators were egging the armed militants on. Republican state senator Dallas Heard, in particular, went on a rant about how it was an "illegitimate session" because of the crowd restrictions and threatened that the "adversaries of the Lord shall be broken to pieces," clearly intending to conflate people who believe in science and democracy with "adversaries of the Lord".

On the same day, across the country in Georgia, the two incumbent Republicans trying to keep their Senate seats in January's run-off election were having a bad time at what was supposed to be a campaign rally.

Sens. Kelly Loeffler and David Perdue found it was hard to be heard over throngs of Republican voters chanting "stop the steal," which has become the rallying cry for people who support Trump's efforts to steal the election. (Confusing, I know, for pro-steal people to declare they're the victims of election theft, but psychological projection is the beating heart of modern conservatism.)

It's unlikely to hurt the electoral prospects of either Senator, to be clear — conservatives may be delusional, but they still know better than to give their power away by not voting. But the situation shows that Republican voters aren't ready to "move on", and are still angry and confused about why the president they voted for, the man who assured them he knew all the tricks to cheat the system, the man who claimed he had an "elite strike force" at his disposal, can't figure out how to nullify the election.

Meanwhile, a chorus of increasingly deranged voices are pushing Trump voters further and further towards the edge.

Stewart Rhodes, the leader of the far-right Oath Keepers militia, keeps demanding that Trump declare martial law and threatening violence if the president fails to comply. The military coup plan is also being pushed by the Epoch Times, a far-right conspiracy theory-laden rag that has grown in popularity as irate conservative audiences reject Fox News for not being unhinged enough. The Family Research Council, which is an incredibly powerful lobbying force in the GOP, has also been putting out "prayers" (which are really press releases) asking God to "expose all election interference and voter fraud engineered by foreign enemies."

Tuesday morning, Axios released an article detailing how Trump has gone into berserker mode, accusing "everyone around him" of being "weak, stupid or disloyal" for not supporting a plan to use military or Department of Homeland Security powers to seize voting machines. (This wouldn't work anyway, since the votes have been tallied and the Electoral College has certified Biden's victory.)

It's definitely fun to imagine the suffering of Trump and all the people who have enabled him all these years, of course. One can even hope Trump will never recover and will spend the rest of his life lost in a miserable black hole of rage and paranoia. Unfortunately, however, Trump is taking his supporters with him, and that's a problem.

We now have millions of Americans — nearly three-quarters of Republicans reject the legitimacy of the election — believing elections should only count if they win them. This is the mentality that led to the Civil War erupting in the wake of Abraham Lincoln's electoral win in 1860. But, as New York Times columnist Jamelle Bouie pointed out in his newsletter, the different camps are no longer divided by geography, and "we are bound to each other, whether we like it or not."

Don't believe anyone who claims to know what will happen next, now that an entire political party — one that controls most state governments, the courts, and the Senate — has embraced an anti-democratic ideology. This is uncharted territory for the country. It may be that this is a temporary delusion and Trump voters will eventually chill out and start pretending they weren't flirting with a fascist coup. Or they could become more hardened and violent with time. Or it could be that some go one way and others become terrorists. The scariest thing of all is that we won't know how this Trump-induced delusion shakes out for months, or even years to come.