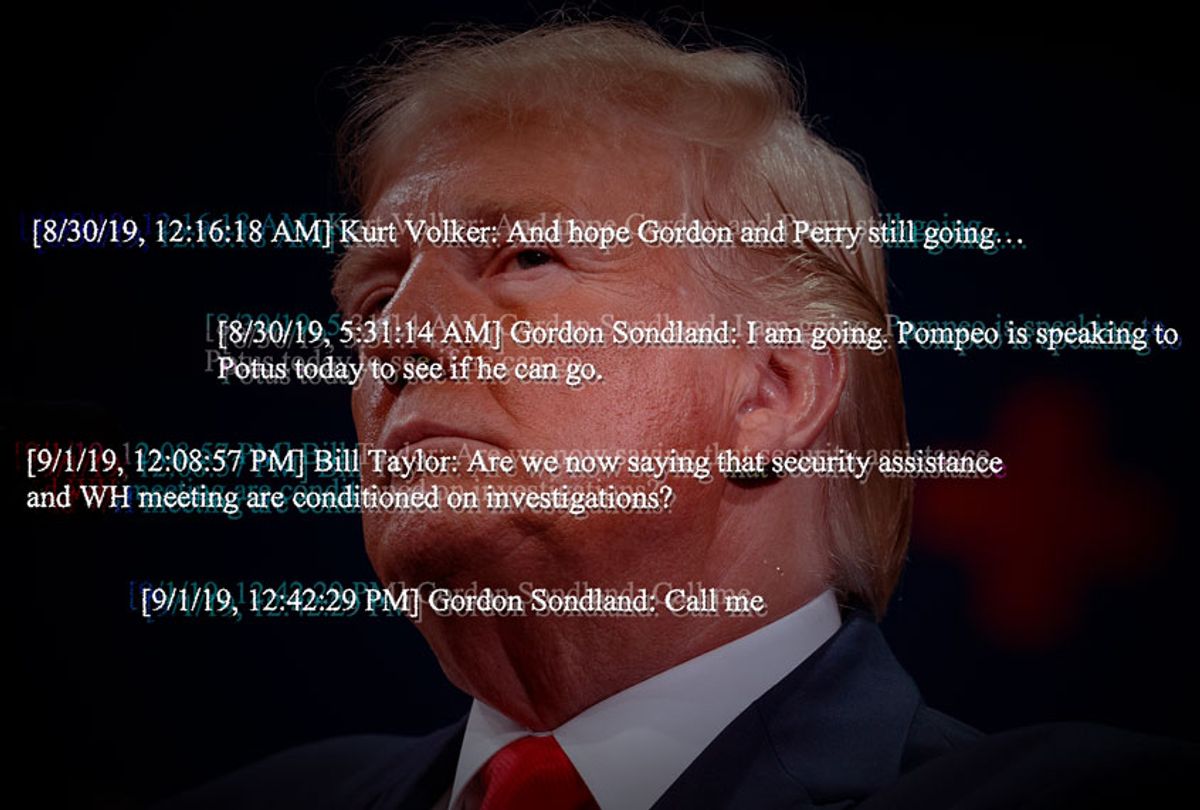 One of the running bits on HBO's hit series "Succession" is between Tom Wamsgans, an executive at the fictional Waystar Royco corporation at the center of the show, and his lackey Greg Hirsch. Tom compels Greg to join what is clearly a criminal conspiracy. Every time Tom tells Greg to do something illegal, or follows up by asking him how the illegal thing went, he ends the talk with some variation of, "We never had this conversation."

To normal viewers, the point of the bit is clear enough: Tom is saying he will deny this conversation if asked about it and expects Greg to do the same.

If we're to believe the things Republicans are saying now, they watch this show and respond, "Golly gee, he just made that conversation disappear by saying the magic words! Tom must be a wizard!"

After all, that pretty well summarizes the spin Republican politicians, pundits and their parrots are putting out concerning a series of damning text messages released by the House Intelligence Committee. These messages show State Department officials, clearly working under President Trump's direct orders, conducting a lengthy pressure campaign on the Ukrainian government. State Department officials made it quite clear to their counterparts in Ukraine that staying in Trump's good graces — and getting desperately needed military aid — was contingent on Ukraine providing Trump concocted evidence he could use to bolster his crackpot conspiracy theories about the Democrats.

The documents are quite clear about both the quid that was expected and the quo that would be withheld if the Ukrainian side failed to give the orange mobster in the Oval Office what he desired. An aide to Ukrainian President Volodymyr Zelensky repeatedly presses for a meeting between his boss and Trump, clearly to discuss the military aid that Trump was withholding from the Kyiv government. He is repeatedly told that won't happen until Zelensky announces an investigation into already-debunked conspiracy theories about Hillary Clinton and former Vice President Joe Biden. Gordon Sondland, the U.S. ambassador to the EU, and Kurt Volker, who was then the special U.S. envoy to Ukraine, also discuss between themselves how to extract a "deliverable" from Zelensky in order to make the meeting happen, with the clear goal of getting the military aid released.

On Sept. 9, Bill Taylor, the U.S. chargé d'affaires in Ukraine (and the top diplomat in the absence of an ambassador), texted Sondland: "As I said on the phone, I think it’s crazy to withhold security assistance for help with a political campaign."

Sondland, clearly worried that Taylor might become a snitch, replied, "The president has been crystal clear no quid pro quo’s of any kind." It may be worth noting here that Sondland is a wealthy hotel proprietor and real estate investor who donated $1 million to Trump's inaugural fund, whereas Taylor has been a career diplomat since 1992.

Republicans like Trump sycophant Rep. Jim Jordan, R-Ohio, have predictably seized on this statement as proof that there was no quid pro quo, despite the lengthy textual evidence preceding it showcasing the quid, the quo and endless discussion on the timing of the pro. This is much like saying that because Trump paid Stormy Daniels for her silence, that means the adultery never happened.

Of course, Republicans aren't actually stupid enough to think yelling "Take-backsies!" works. As usual, this is a bad faith argument and needs to be understood as such.

But Sondland's text is more than a lame ass-covering effort. It also shows that he and Trump were well aware that what they were doing was unethical or illegal or both. That's why there's all the subterfuge and attempts to claim that obvious quid pro quo is not quid pro quo simply because you say so, which is a little like yelling, "These are not drugs!" as you flush the cocaine down the toilet while the cops come through the door.

It's the same situation with this interesting text exchange between Sondland and Taylor:

[9/1/19, 12:08:57 PM] Bill Taylor: Are we now saying that security assistance and WH meeting are conditioned on investigations?

It seems that some rudimentary understanding of the Stringer Bell rule — don't take notes on a criminal f**king conspiracy — wormed its way into Sondland's brain, but only when he realized he was talking to the openly skeptical Taylor, and not when he was working with Volker to strong-arm Zelensky on that "deliverable."

"It's the cover-up and not the crime" is always a lame cliché, and even more so in a case like this, where Ukrainian soldiers were dying in the conflict with Russia while Trump was holding up military aid in hopes that Ukraine would fluff up a conspiracy theory for him. But Trump has used that cliché to great effect, by being so brazen about flouting the law.

Our president "admits having done it, but then argues that it’s perfectly cool, perfectly legal, and not that big of a deal," Dahlia Lithwick writes in Slate, describes Trump's strategy of escaping accountability. "It’s uncanny but it never fails him."

By telling Taylor that Trump is insisting that his behavior doesn't constitute a quid pro quo, Sondland inadvertently shows that Trump understood perfectly well that it was illegal to withhold military aid and refuse to meet with Zelensky until he got the "deliverable," in the form of grist for his conspiracy theories.

Trump may not be anyone's idea of an intellectual, but when it comes to managing corrupt and criminal conspiracies, he knows full well what he's doing. He only play-acts for the cameras — and for Maggie Haberman — the role of a nincompoop who has no idea that his criminal behavior is criminal.

As usual, Trump and his allies are depending on the likelihood that people simply won't read the full documents that give context to the quotes being bandied about on social media and cable news. Congressional documentation of the relevant text messages is only six pages long, with generous spacing. Anyone who cares to know the truth can read it in the timespan of a short visit to the loo. It's crucial for members of the public to read the evidence for themselves, rather than listen to Republicans as they pretend they're too dim to understand the dialogue in a standard-issue gangster movie.