Does Donald Trump really believe all those conspiracy theories? Depends what you mean by "believe"

Don't swallow Trump's claims to believe every nutso conspiracy theory. He's playing dumb to get what he wants 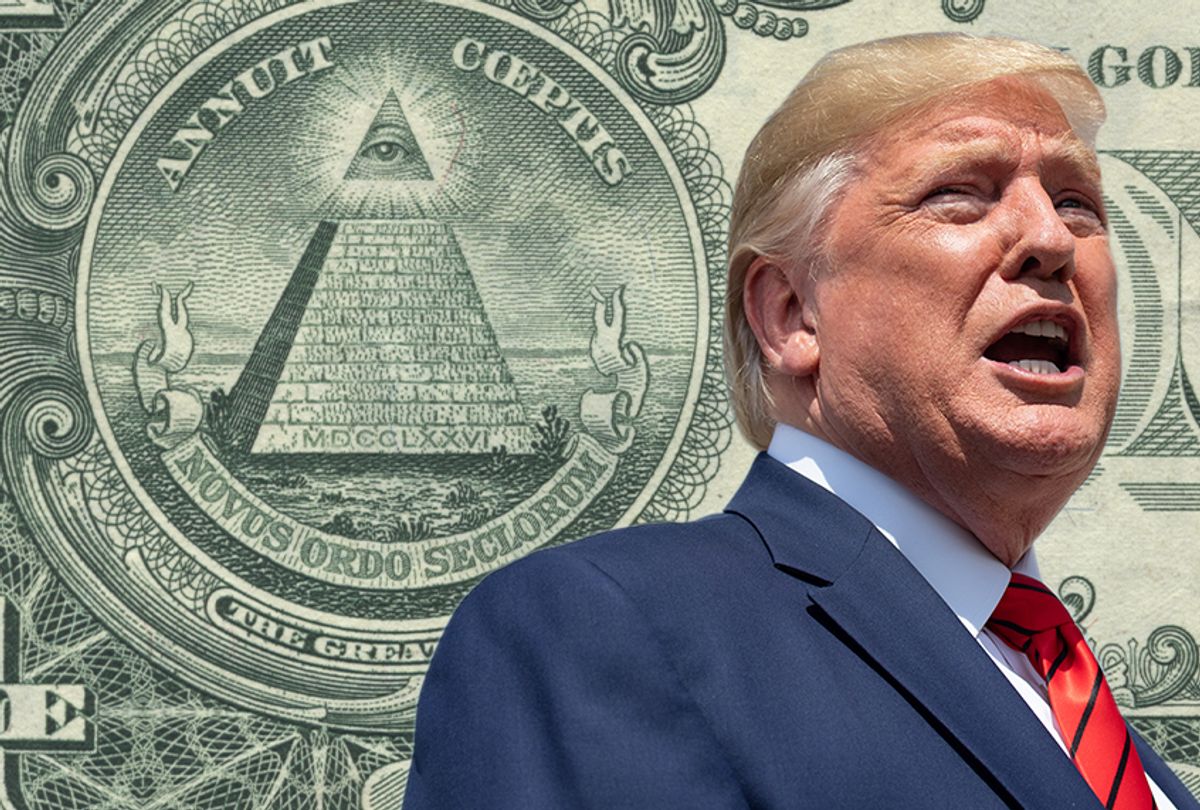 If there one thing is absolutely certain about Donald Trump, it's that he's a liar. When the Washington Post last updated its Trump fact-checker on Aug. 5, Trump was up to an average 13 false claims a day, a number that has no doubt escalated in the wake of Speaker Nancy Pelosi's announcement of a formal impeachment inquiry. But it's not limited to his lying mouth. Everything about Trump is a lie: His hair, his skin color, his reputation as a businessman, his self-identification as sexually dynamic, his claims to be "great-looking" and a "stable genius."

Lies come more easily to Trump than the truth, it seems. That's why the simplest explanation for his tendency toward insane conspiracy theories is not that he's actually duped by the nonsense he spouts, but that he's trying to dupe his followers, in the same way he spent his career duping customers, charities and contractors. Trump's greatest and perhaps only real pleasure in life is getting one over on someone else. So when he spreads conspiracy theories, such as that Hillary Clinton had his friend Jeffrey Epstein murdered, or that he lost the popular vote in 2016 due to widespread voter fraud, the safe bet is that he knows it's not true and he's just trying to bamboozle his gullible followers, whom he holds in obvious contempt.

But in the wake of revelations that Trump attempted to extort Ukrainian President Volodymyr Zelensky to manufacture a fake scandal meant to undermine Joe Biden's presidential campaign, the questions is being raised once again: Is Trump getting high on his own supply? Does this consummate liar now believe his own conspiracy theories?

On Monday morning, the White House reporting team of Maggie Haberman, Peter Baker and Sheryl Gay Stolberg of the New York Times published an article pushing the idea that Trump isn't a liar so much as he's an idiot.

"President Trump was repeatedly warned by his own staff that the Ukraine conspiracy theory that he and his lawyer were pursuing was 'completely debunked' long before the president pressed Ukraine this summer to investigate his Democratic rivals, a former top adviser said on Sunday," they write in a piece that finally puts a name — former homeland security adviser Thomas Bossert — to the steady stream of accusations of Trump's terminal stupidity flowing from White House aides to the Times.

The conspiracy theory in question is one beloved by QAnon, a collective of conspiracy theorists on the internet who believe (or claim to believe) that Trump's constant turmoil is a cover for his secret master plan to take down an international child sex-trafficking ring. What QAnon holds is that, contrary to findings by U.S. intelligence services, Russia was not actually behind the plot to hack Democratic Party emails in order to influence the 2016 election in Trump's favor. Instead, the QAnoners claim, the Democratic National Committee, with help from Ukrainians, hacked themselves and framed the Russians.

That is, of course, almost incomprehensibly dumb. But Trump nonetheless brought it up with Zelensky during their now-infamous phone call.

"I would like you to find out what happened with this whole situation with Ukraine, they say Crowdstrike ... I guess you have one of your wealthy people ... The server, they say Ukraine has it," the recreated transcript has Trump saying to the Zelensky, who seems understandably confused. Experts in right-wing conspiracy theories see this is as Trump trying to get Zelensky to cough up something that might affirm the QAnon Ukraine conspiracy theory.

The question, then, is what Trump is trying to achieve here. Is he actually a believer in this conspiracy theory — or the one about Biden's dealings in Ukraine, which has also been debunked — and is legitimately asking for Zelensky to look into these claims? Or is he a liar and a crook, using mob-style tactics to insinuate that Zelensky, or whoever else he is talking to, should take the hint and find ways to falsify evidence?

The New York Times team clearly prefers the theory that Trump is a dupe rather than a deceiver. They write that "former [White House] aides said separately on Sunday that the president had a particular weakness for conspiracy theories involving Ukraine," and emphasize that Trump prefers to hear from people who are peddling such theories instead of those who are sharing actual evidence gathered by intelligence services.

This analysis from the Times is no surprise. From the get-go, Haberman in particular has touted the narrative that Trump's stupidity is more explanatory than Trump's malice, which also happens to be the same narrative her typically anonymous White House sources favor. There's considerable reason to be skeptical of this narrative, which also happens to be the one that's most advantageous to Trump and those who work for him.

It may seem weird to argue that Trump-the-moron is a narrative that benefits the president, but in fact that works for him — and especially the people under him — better than the narrative that he knows exactly what he's doing. Stupidity removes considerable moral culpability from both Trump and his advisers.

It allows the aides to portray themselves as good people who are just trying to manage an irrational boss, rather than people who are knowingly covering for a criminal, which is what their actual actions (such as illegally concealing his conversations with foreign leaders) would suggest. It allows Republican politicians, pundits and voters to tell themselves that Trump is a well-meaning guy who should be forgiven his peccadilloes, since he's just too dumb to know better.

In reality, there are strong indications that Trump is aware that the conspiracy theories he spouts are false and that he understands that when he asks other people — whether that's foreign heads of state, his own lawyers or White House aides — to produce "evidence," he's actually asking them to concoct false evidence on his behalf.

This was precisely his strategy when promoting the "birther" conspiracy theory in the years before he ran for president. Trump would rarely, if ever, claim directly that Barack Obama wasn't born in the United States. Instead, he would simply claim he had "doubts" or make statements like, "I want him to show his birth certificate," nourishing the illusion that he was simply trying to get at the truth, rather than spreading vicious lies.

This level of care in establishing plausible deniability suggests that Trump is not a clueless doofus who believes everything he reads on the internet. It also suggests that when he presents these conspiracy theories to aides or other people he hopes will help him spread them, he's doing so with a wink and a nudge: He doesn't care where the "evidence" comes from or whether it's remotely true or plausible. He would just like it to manifest itself.

For instance, Trump knows full well that he is the man on the famous "Access Hollywood" tape bragging about how he likes to sexually assault women. Yet he told multiple allies behind the scenes that he didn't "think that was my voice," even though there is literally video accompanying the recording.

"Trump Once Said the ‘Access Hollywood’ Tape Was Real. Now He’s Not Sure," proclaimed the headline above a New York Times article written by Haberman with Jonathan Martin, as if Trump's "questions" about fakery should be understood as legitimate expressions of doubt or concern. In truth, Trump was likely doing what he does every time he claims to believe a conspiracy theory, using insinuation to pressure his allies into knowingly spreading lies that he believes will help him.

"'He doesn’t give you questions, he doesn’t give you orders, he speaks in a code. And I understand the code, because I’ve been around him for a decade," Trump's former lawyer, Michael Cohen, explained in his congressional testimony earlier this year.

Cohen was explaining how Trump communicated his desire for Cohen to lie to Congress without coming right out and saying so. This tactic was clearly meant to shield Trump from accountability should Cohen ever flip. It worked, by giving Trump's defenders a talking point — he never outright instructed Cohen to lie — that we heard over and over in the wake of Cohen's testimony.

This might seem like a small thing, quibbling over whether Trump is delusional or knowingly lying. But as the case of Cohen shows, it matters quite a bit. Trump was able to weasel out of accusations that he instructed Cohen to commit perjury by using these insinuations instead of direct orders. Trump and his allies are already at it again, arguing that because Trump never explicitly said that he wanted falsified dirt on Biden from Zelensky in exchange for military aid, there was no "quid pro quo."

Trump isn't a genius, but he also isn't as stupid as he pretends to be, especially when he knows he'll benefit from it. It's about time we stopped letting him to play unbelievable dumbass to get out of trouble.