Will Republicans dump Trump? Nope — they'll cover up for him until the bitter end

Republicans are all-in on Trump at this point. They'll ride the ship to the bottom rather than let Democrats win 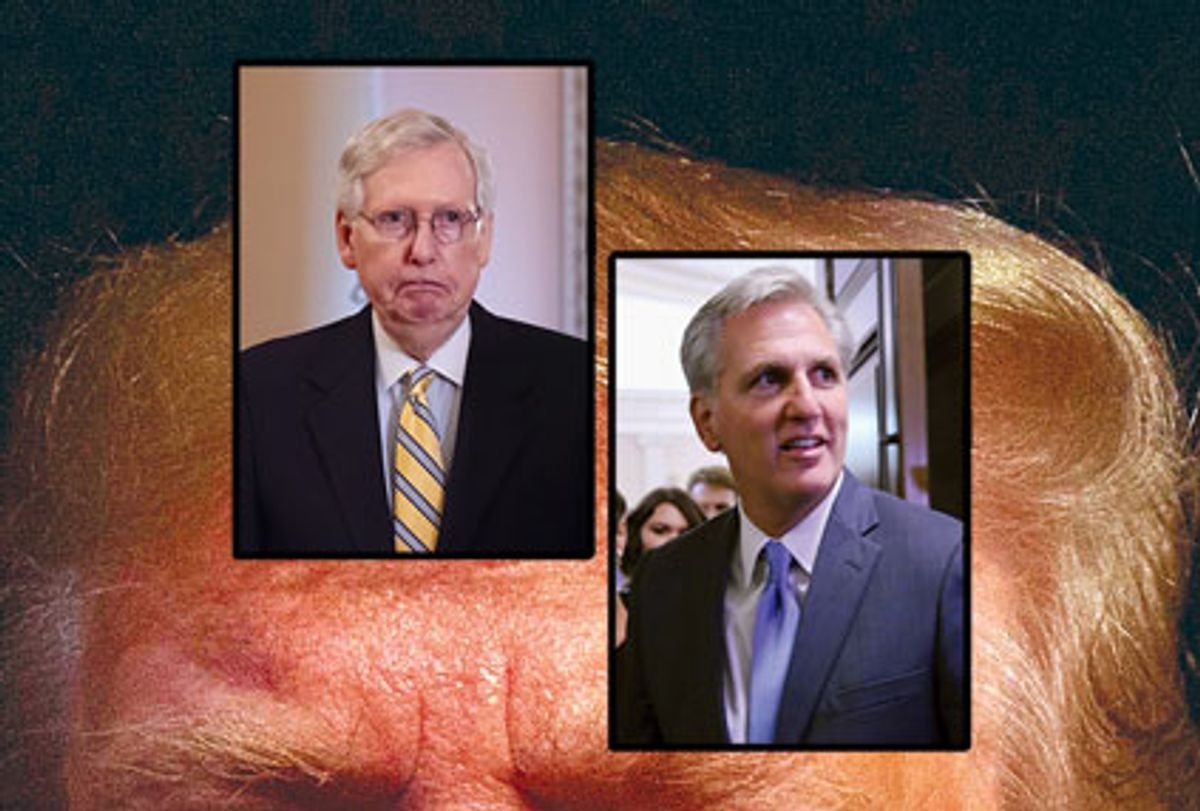 On Tuesday afternoon the dam finally broke: Speaker of the House Nancy Pelosi announced that the Democratic House majority would finally begin a yes-it's-real impeachment inquiry into President Donald Trump. The ostensible breaking point was Trump's apparent use of military aid to Ukraine as leverage in an effort to get the Ukrainian government to manufacture incriminating evidence against former Vice President Joe Biden, a leading Democratic presidential contender. But evidence also suggests that Democratic members of Congress who had been heavily dosed with spreadsheets and PowerPoints by consultants who warned them that impeachment wasn't politically popular were educated otherwise by their constituents during the August recess.

Either way, one thing is certain: Even though Democrats were willing to stop chasing polls and start holding Trump accountable, no one should expect the same from Republicans. On the contrary, we can expect that the entire Republican congressional caucus — which has backed Trump all the way, through his sexual predations and excusing the murder of a journalist and attempting to collude with a Russian criminal conspiracy and profiting from the presidency and obstructing justice, among other corrupt and likely criminal actions — will continue to do so, no matter how damning the evidence against him.

It's not that congressional Republicans are unaware that it might be a political liability to back an openly criminal president. That's why Senate Majority Leader Mitch McConnell allowed his troops to vote on a resolution calling on the Trump administration to release the whistleblower regarding the Ukraine scandal — and why Republicans allowed it to pass by unanimous consent.

But the devil, as they say, is in the details, and sure enough, that resolution is non-binding on the administration. McConnell knew full well it was only for show, and would not actually ensure that yet more damning information about Trump is exposed to the public.

Indeed, McConnell appears to be hewing to Trump's own strategy of feigning transparency while quickly shoveling dirt over any troubling evidence. For instance, Trump's reaction to calls for the release of the whistleblower complaint — which reportedly covers multiple actions by the president — was to throw up a decoy, claiming he intended to release a "transcript" of a call to Ukraine's president, Volodymyr Zelensky.

Let's be clear that what the White House released on Wednesday is not a verbatim transcript of the Trump-Zelensky conversation but rather a "memorandum of telephone conversation" based on the “notes and recollections of Situation Room Duty officers” and other officials, all unnamed. Even so, it's not a good look for the president.

The reconstructed transcript shows that Trump, as is his habit, threatened Zelensky by insinuation, reminding him that "the United States has been very, very good to Ukraine," before asking Zelensky to coordinate the attack on Biden with Trump's personal lawyer, former New York mayor Rudy Giuliani. At that point, Trump was holding up military aid to Ukraine, which no doubt explains why Zelensky tries to appease Trump by promising to cooperate.

In other words, nice military aid you've got there. Shame if something happened to it.

White House officials are spinning this by pretending to be too dumb to hear the obvious threat, which is no doubt the plan that will be adopted by Republicans generally. Meanwhile, the whistleblower complaint and other evidence is still being withheld both from House Democrats and the public.

This is the same trick Trump pulled with special counsel Robert Mueller's report on Trump's efforts to collude with a Russian criminal conspiracy to interfere with the 2016 election, along with his use of presidential powers to cover up for this conspiracy after the fact. The administration at first released only a truncated summary in the form of a memo by Attorney General Bill Barr that purposefully distorted Mueller's findings to create the illusion of Trump's innocence. When we actually got to read the report, it showed that the evidence against Trump was vast and damaging. Team Trump played that game for a month before releasing the actual report, successfully killing off much of the media interest in the substance of Mueller's findings.

That will be the strategy again: Release falsified and misleading documents instead of the real ones, claim transparency, and try to wait out the news cycle. We can only hope that the launch of formal impeachment proceedings will be a good counterbalance to a strategy that has, so far, has worked to cover up, or at least minimize, Trump's likely crimes.

Republicans on Capitoll Hill made it quite clear that they would keep on defending Trump, no matter what.

House Minority Leader Kevin McCarthy denounced the impeachment inquiry by saying that Pelosi "does not speak for America," even though Democrats snagged millions more votes than Republicans in the 2018 elections. (That was also true in 2016, of course, which only demonstrates how undemocratic our system is.)

McConnell also indicated that he hasn't backed off even an inch from his cover-up for Trump's criminal behavior, releasing a statement claiming that Democrats have held "a two-and-a-half-year impeachment parade in search of a rationale." (In reality, the number of impeachable offenses has kept on piling up, but until now, Pelosi has been unwilling to pull the trigger on a formal inquiry.)

Other Republicans have tried to stick by Trump's efforts to claim that all this is somehow a Biden scandal, instead of a Trump scandal. Republican National Committee chair Ronna McDaniel falsely claimed that it's Biden who is hiding transcripts of calls to Ukraine, not Trump.

Sen. John Kennedy, R-La., appeared on MSNBC and doggedly tried to make this about Biden — who, as the timeline makes clear, did nothing wrong in Ukraine — until host Chuck Todd got fed up and exclaimed, "Don’t gaslight us!"

(Kennedy denied that he was gaslighting, which would be more gaslighting.)

Even Republican senators in swing states who face tough 2020 re-election races so far seem unwilling to turn on Trump. Both Martha McSally of Arizona and Cory Gardner of Colorado wriggled free of reporters' questions by saying they're holding out for more information, even though what's already in the public record is more than sufficient to convict Trump for high crimes and misdemeanors.

Republican donors also appear eager to defend Trump until the bitter end. Fundraising efforts painting Trump as a victim of liberap persecution reportedly netted $1 million in donations for the RNC in the span of a day.

To the average observer, this obstinate defense of Trump might seem bewildering. McConnell and other congressional Republicans could cut Trump loose and allow Democrats to kick him out of office without losing any real political power. Installing Vice President Mike Pence — who has largely skated by without blatant culpability — in the White House would change nothing for Republicans, in terms of getting the right-wing federal judges and corporate-friendly policies they desire. It would make the nonstop Trump stress go away, which clearly threatens many down-ticket races for Republicans.

But the reality is that modern-day Republicans — the voters, the candidates and the office-holders — don't think that, as I document in my book "Troll Nation." Enacting their preferred policies is important to Republicans, but symbolic victories over the Democrats and "liberal tears" matter even more. Dumping Trump would be to handing liberals and progressives a big win, and to the contemporary right-wing mind, that's an anathema. They'll fight on till the ship's at the bottom of the ocean, no matter the cost to themselves.

That's why Trump and the Senate Republicans went to the mat for Supreme Court Justice Brett Kavanaugh during his confirmation hearings, when they could easily have swapped him out for an ideologically identical nominee who hadn't been accused of sexual assault. Republicans' insistence on Kavanaugh almost certainly helped tipped the scales towards Democrats in multiple House races, but that kind of political calculation was completely lost in the rage at feminists for daring to challenge their golden boy and a desire to win the immediate battle.

That same lunacy will guide Republican attitudes towards Trump. No matter how politically toxic he becomes, Republicans will fight for him — and even commit crimes of their own in doing so, if necessary — rather than allow the left to take him out. That's how irrational Republicans have become: They'd rather burn their own party to the ground than allow their hated enemies to take down the most corrupt president any of us have ever seen.