Amid all the talk of rising crime rates, the dire condition of American urban housing is completely ignored 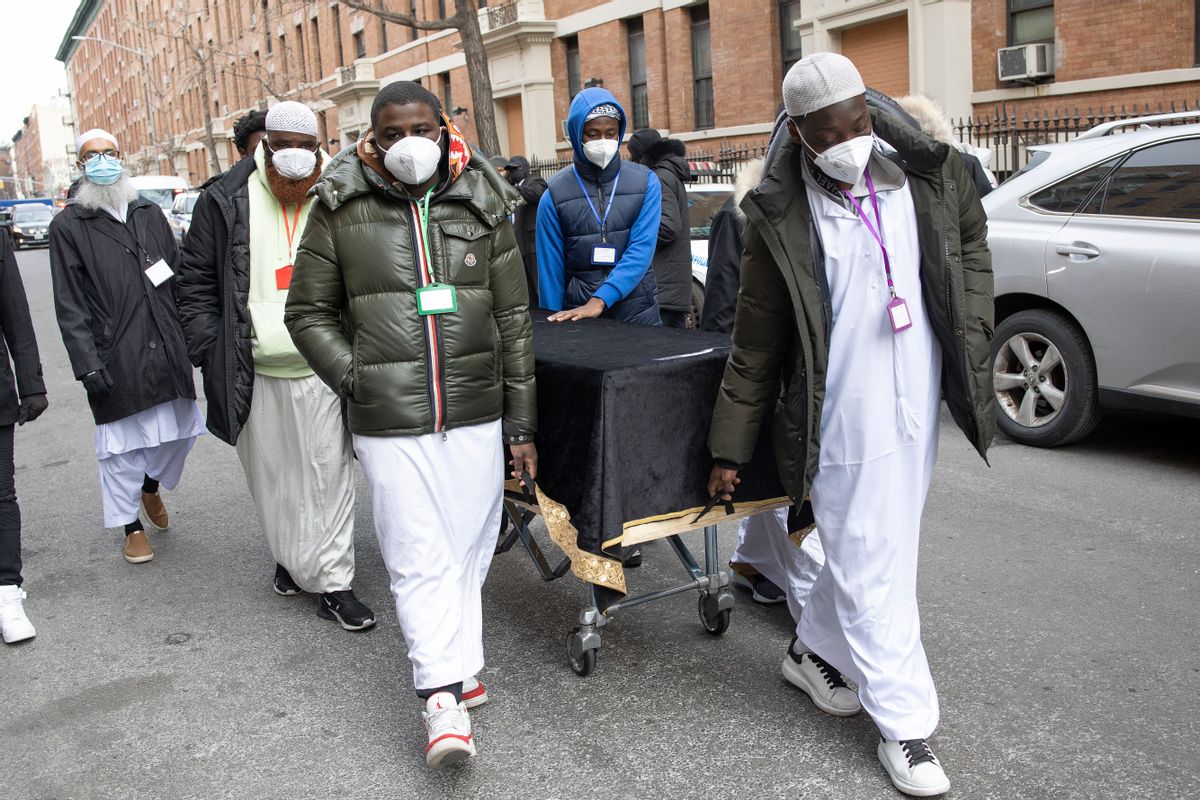 Caskets for 15 victims of a fire that killed 19 people in the Bronx are wheeled into the Islamic Cultural Center for a mass funeral on Jan. 16, 2022. (Andrew Lichtenstein/Corbis via Getty Images)
--

This article was originally published by Insider NJ in slightly different form, and appears here with revisions by the author. Used by permission.

This past week, with President Biden's visit to New York and sit-down with Mayor Eric Adams, after the murder of two NYPD officers, the news coverage was all about the need  to reduce street crime and the flow of illegal guns into America's urban neighborhoods. There was much said about the need for more aggressive policing to suppress street crime — and only passing references to addressing the underlying socioeconomic preconditions for violent lawlessness.

Largely ignored, however, was the role our economic system plays in letting so much of America's housing stock in those communities fall into complete disrepair. This too is a crime, but as we saw with the Great Recession's Wall Street residential mortgage heist, there's never a perp walk for these landlords and hedge-fund types who profit from the scarcity of affordable housing.

After all, this is the campaign donor class that rents Congress.

The sorry state of so much of America's housing stock has resulted in deadly tragedies that are invariably reported as one-off events, but when considered in the aggregate should inspire a national call to action.

"Studies show poverty is the single most important factor related to unintentional injuries in children," according to FEMA. "According to the U.S. Fire Administration, fires and burns were the third leading cause of unintentional fatal injuries to children 14 or younger. In addition, children from low-income families have been found to be five times more likely to die in a fire."

Last month in the Bronx, a high-rise fire that killed 17 people — eight of them children — was blamed on a faulty space heater and the failure of two apartment doors to close automatically, as required by the city building code.

In multiple press reports, tenants were quoted as complaining that the building was plagued by poor maintenance. They said they regularly relied on space heaters, boiling water and leaving their stoves on to supplement inadequate building heat.

Rep. Ritchie Torres, a newly-elected Democrat who represents the district where the blaze occurred, said the tragedy was emblematic of "a tale of two cities," telling WNYC radio, "If you live in a luxury building in Manhattan, you can take fire safety for granted. But if you live in an affordable-housing complex in the South Bronx, there's no guarantee your building will have a sprinkler system. There is no guarantee you will have functioning fire alarms, smoke alarms, self-closing doors or safety knobs on your stove."

Last month, three Baltimore firefighters were killed fighting a fire in a "zombie home" that had been unoccupied for more than a decade and collapsed on them. Firefighters Kenny Lacayo and Kelsey Sadler and Lt. Paul Butrim were working on the first floor  when they were trapped after the drywall and framing gave way. A fourth firefighter was also trapped but survived.

The Baltimore Sun reported that in 2015 a fire at the same vacant home left three firefighters injured and resulted in the house being condemned. It had been put up for tax sale four times but had no takers.

"The homeowners had also received a citation in 2020 from the city housing department for failing to complete a required annual registration," the newspaper reported. So the house that would kill these firefighters continued to stand for years as a monument to the multifaceted failure at every level of our "stuck nation." It's a political economy completely rigged to protect even decrepit property, even when it presents a clear and present danger to the neighborhood and to firefighters and other emergency workers.

With that fire we lost three selfless individuals who were dedicated to protecting life and property. Yet the community, state and nation they swore an oath to serve lets zombie homes stand, even as millions of Americans are homeless or shelter-insecure.

Everything but the actual cause

In 2009, Elizabeth, New Jersey, Fire Captain Gary Stephens, 57, was mortally injured when he was run over by a fire truck while responding to a fire in a vacant home in that city which had been the subject of numerous neighborhood complaints. Two homeless men who were living in the zombie home were arrested. One of them admitted to starting the fire to stay warm, pled guilty to manslaughter and was sentenced to three years in jail. The second was convicted of trespassing and was sentenced to time served.

Because the incident was a line-of-duty death, the New Jersey Division of Fire Safety did an investigation that generated a 21 -page report captioned "career firefighter killed upon being run over by fire apparatus."

"The purpose of firefighter casualty investigations is to report the causes of serious firefighter injuries or deaths and identify those measures which may be required to prevent the future occurrence of deaths and serious injuries under similar circumstances," according to the report. "In some cases, new information may be developed, or old lessons reinforced, in an effort to prevent similar events in the future."

There's a passing reference to the cause of the fire being "vagrants who gained access into the home and ignited combustible materials found in the home for a warming fire." The rest of the report puts the fire apparatus, the Elizabeth Fire Department's training and its record keeping under a microscope and offers lessons learned, none of which included addressing the life-and-death consequences of letting homes sit vacant as community complaints pile up.

These stories are invariably datelined in poor neighborhoods of color that remain, more than a decade later, visibly scarred by the Great Recession.

As has been widely reported, none of the Wall Street malefactors were ever held responsible for the collapse of residential property values on Main Street or MLK Boulevard that their greed engineered.

This hollowing out of so much of America was a bipartisan achievement that included tax cuts for the top tenth of the one percent even as America's housing crisis deepened. Beltway politicians ignored the human and housing fallout even as they bailed out the same banks whose greedy speculation had created the crisis in the first place.

Of course, the national inattention to the zombie home crisis left the matter up to local and county authorities, who have all too often been compromised by local real estate and banking interests.

Letting these structures rot in place had dire consequences for surrounding neighborhoods, which saw their home values plummet. Squatters and drug dealers break into them and make them their own while the banks do their best to avoid taking responsibility for ownership. And this willful neglect.informed by systemic racism, has deadly consequences for the most vulnerable among us.

Consider the 2012 blaze in the Vailsburg section of Newark, New Jersey, where a vacant house caught fire and the flames spread to an adjoining residential property, killing an adult and three children: a 3-year-old, a 4-year-old and a 6-year-old.

Vacant homes in varying levels of disrepair remain a major problem in New Jersey, with thousands of vacant zombie residential properties not just in the state's urban core, but in suburban and rural areas as well. One national real estate tracking service reported that as of the fourth quarter of 2021, there were 1.3 million vacant residential properties in the United States.

Meanwhile, the Pew Research Center reports that almost half of those responding to a survey last October believe that finding affordable housing is a "major problem" in their community.

"The survey reflects the steep rise in home prices and rents during the pandemic that are intensifying an existing housing crisis, particularly in major cities, where demand for housing outpaces available supply," according to Pew. "Cities and states are scrambling to implement policies that stimulate housing production and encourage increased density in hopes of relieving pressure on the overheated housing market."

This housing squeeze was a precondition of the pandemic and no doubt helps drive that horrific statistic often cited by the Rev. Dr. William Barber: Every year in the U.S., before the pandemic, 250,000 Americans died from causes related to health care disparity and substandard housing.

Meanwhile, Biden had to throw in the towel on his $1.8 trillion dollar Build Back Better agenda because he couldn't even get all of his own party's senators to embrace it.

From within the Beltway things may look fine. But in the streets where zombie homes haunt the block, it's always marginal — and it's often the poor and our firefighters that pay the price. Restoring communities is not just about apprehending violent offenders. It's about addressing the damage done by an economic system that feeds off the scarcity of basics — like a clean, safe and affordable place to raise your kids.

We need to address the crime wave in the corporate suites too.

Read more from Bob Hennelly on labor, inequality and our "Stuck Nation":