The pandemic thrust Sara Nelson into the labor limelight. Now she has her eyes on America's most powerful union job 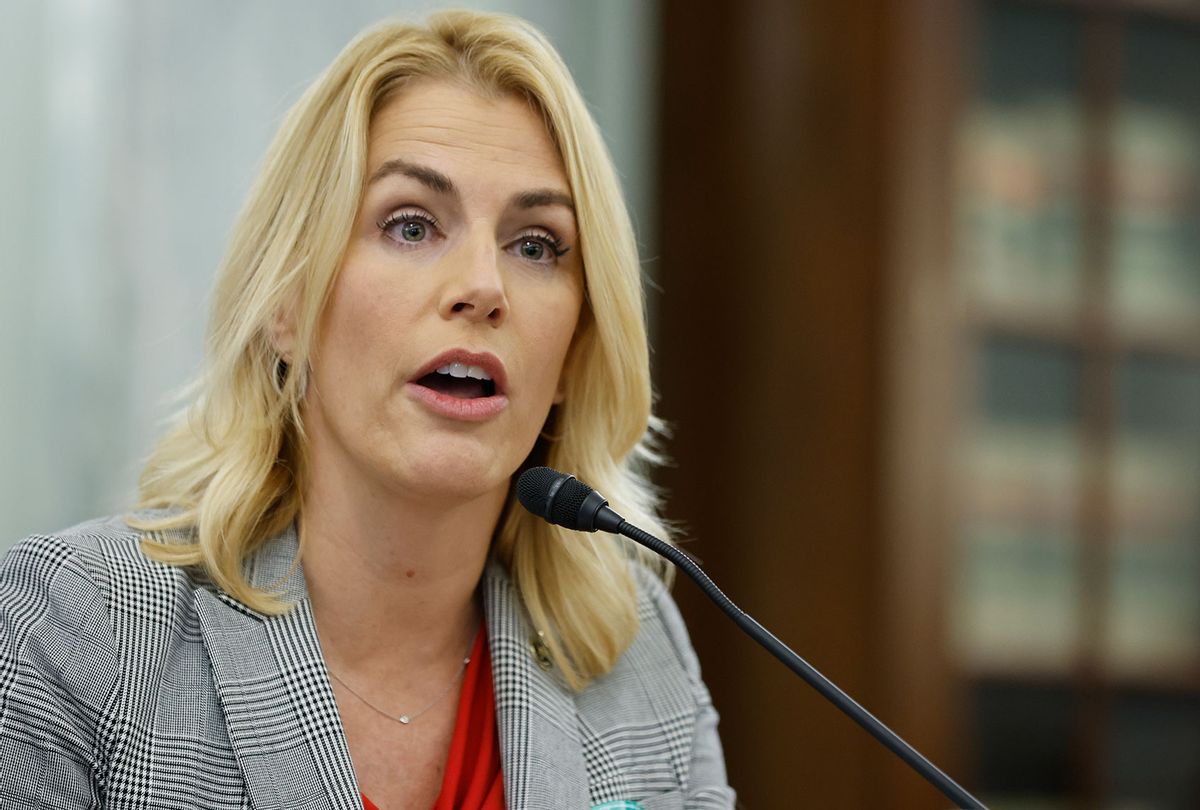 Association of Flight Attendants-CWA International President Sara Nelson testifies before the Senate Commerce, Science, and Transportation Committe in the Russell Senate Office Building on Capitol Hill on December 15, 2021 in Washington, DC. The air transportation executives testified about the current state of the U.S. airline industry during the oversight hearing. (Chip Somodevilla/Getty Images)
--

Sara Nelson, president of the Association of Flight Attendants, who had signaled her intention to challenge longtime AFL-CIO president Richard Trumka's re-election prior to his fatal heart attack last August, is considering pursuing that run against Liz Shuler, who was elevated from the labor federation's secretary-treasurer post after quickly consolidating her support among some of its largest member unions.

Shuler is filling out Trumka's term, which will expire in June, when the annual AFL-CIO convention will feature an election for a full three-year term.

At the time she was elevated, Shuler said, "I believe in my bones the labor movement is the single greatest organizing force for progress. This is a moment for us to lead societal transformations — to leverage our power to bring women and people of color from the margins to the center — at work, in our unions and in our economy, and to be the center of gravity for incubating new ideas that will unleash unprecedented union growth."

Shuler started her labor union career in 1993 where she went to work for the International Brotherhood of Electrical Workers in her native Oregon, where she organized clerical workers at Portland General Electric.She lobbied that state's legislature for the union, and in 1998 attracted attention from the AFL-CIO when she led its drive to defeat a California bill that would have ended dues check-off rights for that state's public employee unions and their members.

That earned her a promotion that sent her to Washington, D.C., to work in the IBEW's political/legislative affairs department, and in 2004 she became executive assistant to union president Edwin Hill. Five years later, she was tapped by Trumka, who was seeking the AFL-CIO presidency, to run with him for secretary-treasurer.

While Shuler's move up the AFL-CIO hierarchy has been the favored route to the organization's presidency, Nelson will counting on her elevated profile as an outspoken leader of a militant union if she runs against someone who, at 52, is just three years older than her and the first woman to hold the most powerful job in the labor movement.

RELATED: Unions warned the CDC's mask rollback would have consequences. They were right

Talk of Nelson seeking the job first surfaced in 2020, and in a recent interview she said the change at the top prompted by Trumka's death had not derailed that idea.

"Americans want solidarity, and they are hurting," she said. "They are looking for answers. You see that unrest everywhere. We have a moment where we have to harness the power of the labor movement that exists today to organize millions more people."

Nelson added, "People don't really have rights at work until they vote for their union and gain the rights of not only a union contract" but the union's power to compel a company to abide by the law.

Even so, she added, "The courts, by the way, are stacked in favor of the corporations anyway."

She said the success of her union, which is part of the Communications Workers of America, and others in the transportation sector in preventing massive layoffs despite a 97% drop in air travel early in the coronavirus pandemic, showed labor's potential power. In passing the 2020 Payroll Protection Plan for the industry, as part of the Coronavirus Aid Relief and Economic Security (CARES ACT), Congress required airlines to maintain their workforce and not use the billions in federal support for CEO bonuses or stock buybacks.

"But all of that was really [made possible] just through the work of our unions, because 80% of aviation is organized, and with that kind of union density, we could demand that," Nelson said. "When you give these companies money and tell them they can figure out the best way to spend it to keep their businesses afloat, it doesn't trickle down to workers and it does create inflation. But our program that put money to the front lines, we see that airline ticket [prices] are actually lower than they were before."

She said the CARES Act was relevant to the debate over whether President Biden's $1.75 trillion Build Back Better plan would accelerate inflation.

"This idea that if you invest in the people of this country there is going to be inflation is absurd; we showed it's otherwise," Nelson said.

The last contested race to lead the AFL-CIO was in 1995, between Tom Donahue, then the incumbent secretary-treasurer, and John Sweeney, president of the Service Employees Union International.

The backdrop for that election was a steep decline in the percentage of unionized American workers. In 1979, 22% of the nation's workers were in a union. By 1995, that proportion had dropped to 15.5%. It currently hovers at just over 10%.

Until Sweeney's successful challenge, "the heads of the AFL-CIO were elected and basically served until they were carried out in a coffin," said labor historian Joshua Freeman, a professor emeritus at the City University of New York Graduate School of Labor and Urban Studies.

Trumka, then the president of the United Mine Workers, was part of Sweeney's winning slate as secretary-treasurer.

Rather than rank-and-file voting, Freeman noted, "The [AFL-CIO] president is elected by a convention of the constituent unions," whose votes are weighted based on the size of each union.

He observed that Nelson's challenge would come at a time of upheaval for America's workers: According to the U.S. Bureau of Labor Statistics, 13.1 million American workers quit their jobs from September through November last year — that number is a half-million more than the AFL-CIO's current membership.

In this instance, Mr. Freeman said, "a lot of the dissatisfaction of workers, and their actions, have been taking place outside of a union context. So this is kind of a labor moment, but the union movement hasn't yet taken advantage of it institutionally on a large scale."

In a survey of workers who quit their positions, a Washington Post columnist got hundreds of online comments and dozens of emails from readers who described how "pandemic working conditions finally drove them out of jobs they would otherwise have stayed in," in many cases because "their employers didn't take the COVID-19 threat or their concerns about it seriously."

Throughout the pandemic, the AFL-CIO and its constituent unions have been pressing the federal government, under both Donald Trump and Joe Biden, to implement workplace safety standards to protect essential workers from the virus.

"We are still in the midst of a deadly pandemic, and health care workers are facing dangerous exposures to COVID-19 and need the strongest possible protections in their workplaces," Shuler tweeted on Jan. 5. "We must treat the surge in new cases as the crisis that it is."

The same day, the AFL-CIO led a coalition of nurses' unions in petitioning the U.S. Court of Appeals to order the Department of Labor's Occupational Safety and Health Administration to issue a permanent standard that requires employers to protect health care workers against the virus.

Nelson said, "We need leadership and consistency to mitigate the spread and evolution of COVID. Battling this pandemic is a workplace safety issue and a layered approach. We need three components working together to keep people safe.

"First, access and incentives along with negotiated mandates for the vaccine with supportive paid sick leave and medical accommodations," she continued. "Second, mask mandates for indoor, populated workspaces, including the public, and third, universal free COVID testing. When people have good information, resources and clear guidance, we make good decisions and act in solidarity."

Read more on the pandemic-era comeback of organized labor: