Will pressure from Manchin's longtime union allies shove him back for another round of BBB talks with Biden? 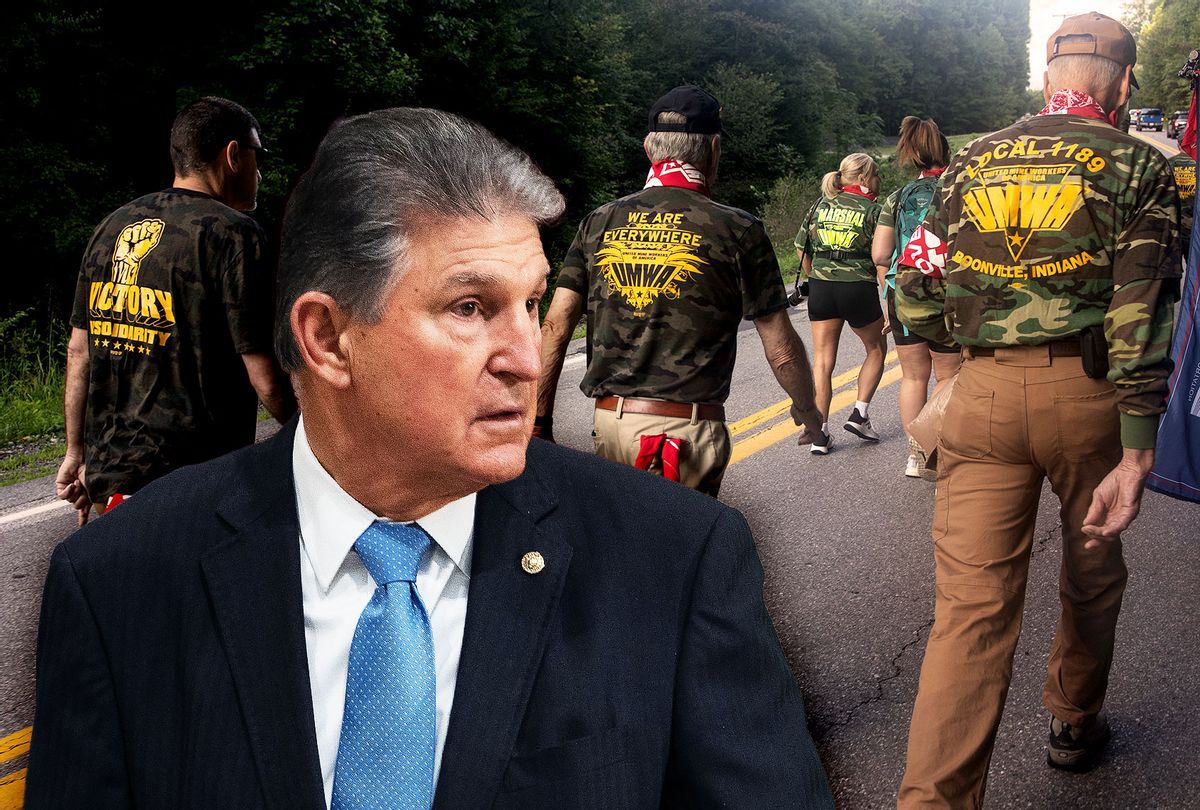 Joe Manchin | A small group of United Mine Workers of America (UMWA) and their supporters retrace the 1921 the 50 mile march of coal miners that resulted in the historic Battle of Blair Mountain to mark the 100th anniversary of the battle, September 4, 2021 in Boone County, West Virginia. The labor insurrection led to the coal miners being bombed and machine gunned, but also to the formation of the union that once had 800,000 members. Today, only a few thousand union coal miners remain in West Virginia. (Photo illustration by Salon/Getty Images)
--

Following Sen. Joe Manchin's informing President Biden that he would not support his $1.75 trillion Build Back Better legislation, West Virginia's labor unions quickly reached out to the senator to prod him to reconsider, which may have breathed some life back into the bill.

The day after Manchin's announcement on Fox News that he would not provide the decisive vote to approve the president's signature program, which has no Republican support in the Senate, the West Virginia AFL-CIO and United Mine Workers of America issued statements urging him to return to negotiations.

"We remain grateful for his hard work to preserve the pensions and health care of our retirees across the nation, including thousands in West Virginia," UMWA President Cecil E. Roberts wrote regarding the West Virginia senator. "He has been at our side as we have worked to preserve coal miners' jobs in a changing energy marketplace, and we appreciate that very much."

But Roberts warned that failure to pass the Build Back Better would result in the shift of the costs of the national program for treating Black Lung "away from the coal companies and on to taxpayers."

Roberts noted that sustaining that occupational-health program was only part of what Build Back Better would accomplish.

"The bill includes language that will provide tax incentives to encourage manufacturers to build facilities in the coalfields that would employ thousands of coal miners who have lost their jobs," he wrote. "We support that and are ready to help supply those plants with a trained, professional workforce. But now the potential for those jobs is significantly threatened."

West Virginia AFL-CIO president Josh Sword pointed to Manchin's history of bringing "opposing parties together to reach compromises on the most controversial of measures. ... It is our hope that he will continue to negotiate with other national leaders in Washington on the legislation, which would help workers, our families and the labor movement both across the country and right here in West Virginia."

He cited the "critical relief" Build Back Better would provide "on the cost of health and child care," while creating and improving "jobs for home care workers" and "expanding access to affordable home and community care for seniors and the disabled."

While Build Back Better's price tag has dominated the debate on the legislation, both labor leaders emphasized its provisions that would make it easier for workers to organize.

"The bill includes language that would, for the first time, financially penalize outlaw employers that deny workers their rights to form a union on the job," Roberts wrote. "This language is critical to any long-term ability to restore the right to organize in America in the face of ramped-up union-busting by employers."

AFL-CIO New York City Central Labor Committee president Vincent Alvarez, in a statement, expressed hope that Manchin and his colleagues would "ultimately reach a reasonable compromise to provide this critical relief for working families across our country."

He said Build Back Better would have "a transformative impact on the lives of working people, creating millions of good-paying jobs, addressing the soaring costs of health care and child care," while "providing groundbreaking labor-enforcement provisions."

In addition to supporting the future funding of the Black Lung Disability Trust Fund for the nation's miners, Build Back Better in its present form would provide $2.86 billion to the World Trade Center Health Program, which provides medical treatment and monitoring for more than 110,000 responders and survivors of the 9/11 attacks. Participants in the program live in every state and in 434 of 435 congressional districts.

During a private caucus call with Senate Democrats, just 48 hours after Manchin's Fox appearance, the senator appeared to be re-engaged with his colleagues.

On that call, Senate Majority Leader Chuck Schumer pledged to press ahead with a floor vote on Biden's agenda in January.

"I know we are all frustrated at this outcome," he told his members on the call, according to Yahoo News. "However, we are not giving up on BBB. Period. We won't stop working on it until we pass a bill."