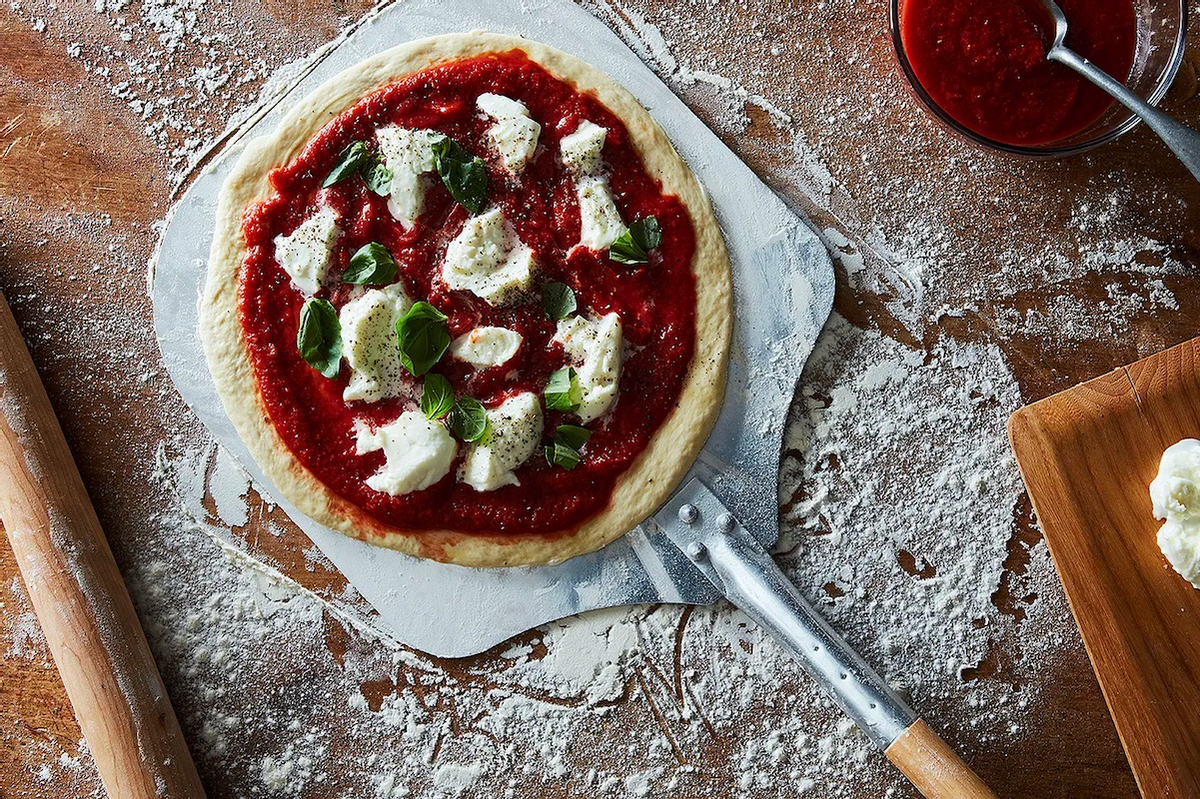 Sometime around the 12th century BCE, Troy fell to the Greeks. As the Roman poet Virgil recounts the story, the mythical hero Aeneas then fled his ravaged city aboard an uncooperative ship with a motley crew. The son of a goddess and a prince, he carried the ancestral burden of begetting a lineage of rulers in a foreign land. After many days at sea, Aeneas and his band disembarked on the shores of Latium (where many generations later, Rome would be founded). Exhausted and famished, they hastily prepared a meal. So hungry, the crew even ate their plates.

Admittedly, these plates would have been like trenchers, sturdy supports made of baked dough. When dry, they still posed a substantial dental challenge — akin to those ornaments made out of salt dough. In theory, they were edible, but eating your dishware was still considered uncouth. Aeneas looked on incredulously, as his men voraciously gnawed on their plates, like dogs with a rawhide bone, when suddenly he remembered the prophecy his father had foretold: When you find yourself in a foreign land and are so driven by hunger that you eat your own plates, that is when you can hope for home. They had found the "Promised Land."

Tethering this myth to the origin of pizza is audacious to say the least, but some enterprising entrepreneurs have dared to do just that. Why go to such lengths? Pizza does have a long history in Italy, but its dominance on the international gastronomic stage hinges not on a glorious past rooted in antiquity so much as an anthropological phenomenon that has come to be known as the "pizza effect."

This term was coined by anthropologist Agehananda Bharati in 1970. It captures the pattern that unfolds when an insignificant cultural item or practice is exported to another country, whereupon it achieves a level of success unheard of in the native country. The native country then looks on in befuddled amazement at the value placed on something they took for granted. The object in question is then reassessed and draped in romanticism. From the new perspective, a potentially lucrative tradition is born. The story of Italian pizza is the quintessential example of this phenomenon, but it reaches beyond food into all aspects of culture, from yoga to salsa music.

The word "pizza" appears in medieval Latin, but by the 16th century, throughout the Italian peninsula, the term referred mostly to rich, leavened breads. Often laden with butter and sweetened with dried fruit or compotes, they were not the flattened disks of dough topped with tomato sauce and cheese we've come to know (though most culinary traditions in Italy did have some form of focaccia or flatbreads). However, it wasn't until the late 18th century that we see the first reference to pizza as an established object of trade, in a plea registered with the police by a pizzaiolo, or pizza maker, facing debtor's prison.

Neapolitan pizza as we know it did not have an inventor, per se. Rather, it was a socioeconomic phenomenon, evolved out of conditions that made the dish not only possible, but necessary. It was originally a street food — though in the 19th century, that term lacked every shred of the romanticism it holds today. For many of the poverty-stricken hordes of Naples, street fare was the only way of procuring a meal. Most dwellings lacked a kitchen, not to mention cutlery, so the ready-to-eat, flat, floppy, foldable disk with some tasty bits on top was ideal. Pizza quickly became associated with those who ate it, branding it from the start with connotations of poverty, filth, and disease.

"Made from a dense dough that burns but does not cook, and is covered with almost-raw tomatoes, garlic, oregano, and pepper: these pizzas, in many pieces that cost one soldo are entrusted to a boy who walks around to sell them on the street, on a movable table," writes Matilde Serao in 1884's The Bowels of Naples. "There he stays the whole day, with these slices of pizza which freeze in the cold, turn yellow in the sun, and are eaten by flies."

According to legend, in 1889, Queen Margherita (consort to Umberto I, the second king of Italy) is said to have granted the request for the royal imprimatur on Neapolitan cheese pizza with basil, and in so doing, she allowed it to bear her name. Thereafter, the tricolored pizza (red, white, and green, the colors of the Italian flag) would be known as "la margherita" — a Cinderella story, ennobling a heretofore ignoble food. State archives, however, hold no record of this. The letter of approval, supposedly issued from the queen's secretary, Camillo Galli, has recently been declared a forgery in an exacting work of culinary history sleuthing. In fact, it is unlikely that the queen ever saw pizza, let alone tasted it. But like the Aeneas myth, some stories are so good they make reality obsolete. The margherita would go on to become Italy's go-to pizza. But not quite yet.

The 54 pizzerias registered in Naples in the early 19th century grew to 121 by 1900. By 1905, the word "pizza," as we now understand it, finally landed in an Italian dictionary as, "the common name of a very popular Neapolitan food. It is, in substance, a sort of leavened sfoglia. Spread with tomato, fresh cheese, anchovies, etc., … and baked in the oven where it puffs up and cooks then and there." Popular, perhaps, but only in Naples. Even with the fabricated blessing of a queen — considered the personification of grace and health — as well as local enthusiasm, every attempt to open a pizzeria in other parts of Italy ended in failure. Neapolitan pizza timidly started appearing in local cookbooks as a novelty, but it still couldn't live down its shadowy past.

By the turn of the century, pizza had been exported to the U.S. along with Italian emigrants. It slowly became a thing as word got around in areas with high concentrations of immigrants from southern Italy, most notably New York. Still, even as late as 1931, there were detractors. In New Jersey's Bergen Evening Record, journalist Simon Stylites writes, "A pizza is manufactured, as far as I can ascertain, by garnishing a slab of reinforced asphalt paving with mucilage, whale-blubber and the skeletons of small fishes, baking same to the consistency of a rubber heel, and serving piping-hot with a dressing of molten lava."

However, after World War II, Italy witnessed a mass migration from south to north, with many leaving poor rural areas and the cramped conditions of urban settings for the security and promise of industrialized cities. As the flow of tourism started to pick up in Italy, foreigners expected to find pizza everywhere, not realizing that it was a culinary tradition confined to Naples. Suddenly, there was money to be made from the pizza trade. A lot of money, in fact.

The postwar decades in Italy were a time of unprecedented growth, referred to as the "economic miracle." More and more Italians were able to participate in the leisure economy, and dictates of the dolce vita were often drawn from perceptions of American lifestyles. As tourists from around the world continued to profess their love for pizza, many Italians began to associate the dish with good times and money well spent with family and friends, from going to the beach to date night. Young or old, suddenly, everyone loved pizza.

Indeed, as I interviewed Italian women in their 90s for my book on Italian foodways, none of them had eaten pizza before 1960. For them, it was like a foreign food. Though they clearly still had misconceptions rooted in the classist history of the dish (even expressing concerns about whether those who'd prepared the pizza had washed their hands), once they tried it, they liked it.

Such a journey the once-humble dish has made. The Associazione Verace Pizza Napoletana, founded in 1984, operates with a mission to protect "true" Neapolitan pizza. Authorities from the AVPN travel the world certifying pizzerias with their stamp of approval — if, and only if, the pizza lives up to the gold standard of quality of this great historical tradition. Their rigorous criteria dictate that the pizza must be formed by hand, without the aid of a rolling pin, then quickly baked in a 905°F wood-burning oven for no longer than 90 seconds. In 2010, Neapolitan pizza achieved one of the highest honors: the E.U. and U.K.'s coveted TSG (Traditional Specialty Guaranteed) certification, which protects the right to use the name of the product only if it adheres to the registered production method. In 2017, the art of making the pizza was inscribed on UNESCO's list of Intangible Cultural Heritage.

Neapolitan pizza does not need to be buoyed up by legends of Aeneas and his dish-eating crew: It stands on its own merits with a glorious and colorful past.